We first caught a glimpse of the Samsung SSD 980 Pro all the way back at CES in early January. The highly-anticipated drive was tucked away in a display case in Samsung’s massive booth on the show floor, but other than the branding, some early claimed performance data, and the fact that drive had a native PCIe 4.0 interface, details were scant. All that changes today, though. We’ve gotten our hands on a couple of shiny, new Samsung SSD 980 Pro drives – in 250GB and 1TB flavors – and are finally able to give you the full scoop.

The Samsung SSD 980 Pro series of solid state drives not only support the PCI Express 4.0 interface, but they are outfitted with a completely new controller, Samsung’s latest NAND flash, enhanced cooling, and a revamped TurboWrite cache. All told, the Samsung SSD 980 Pros should be faster and more reliable than previous-gen drives. Although their endurance ratings look good, we won’t know for certain how their reliability stacks up until the drives have been out in the wild for a while. Given Samsung’s track record though, we’re not concerned. We can find out how the drives perform, however. First up, some specs, a quick tour, and then we’ll dig into some numbers... 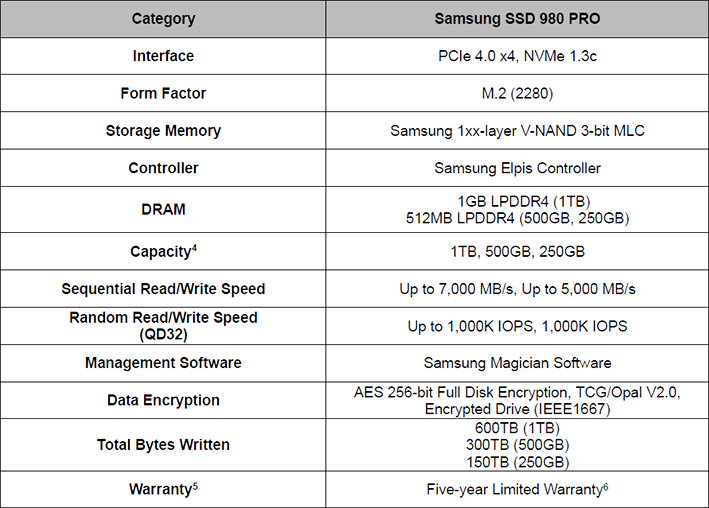 Find Samsung SSD Pro Solid State Drives @ Amazon
The Samsung SSD 980 Pro series of M.2 solid state drives will initially be offered in three capacities, 250GB, 512GB and 1TB. A larger, 2TB model is coming down the pipeline as well, and is slated to arrive before the end of the year. What you see pictured below are the 250GB and 1TB models. 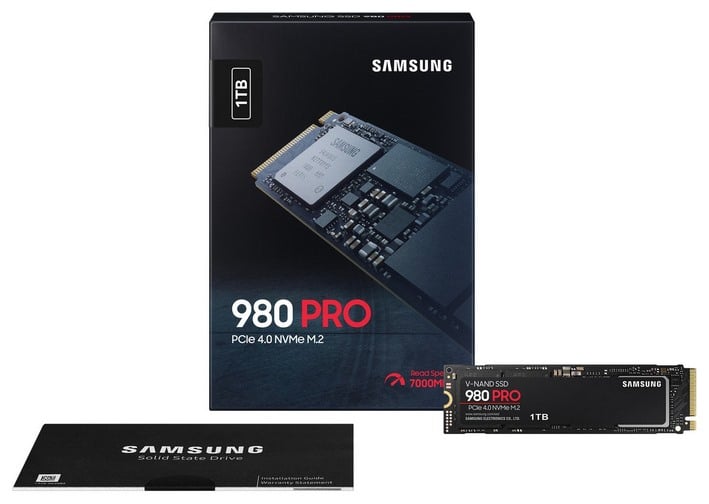 All of the drives in the Samsung SSD 980 Pro series use the common M.2 (2280) ‘gumstick’ form factor. The 250GB drive is rated for peak read bandwidth of 6.4GB/s, with 2.7GB/s writes. The larger 1TB drive offers somewhat higher speeds. The 1TB drive tops out at up to 7GB/s reads with up to 5GB/s writes.

The Samsung SSD 980 Pro drives’ max IOPS ratings vary depending on queue depth, but peak at right around 500K – 1,000K at QD32 depending on the capacity. The drives’ endurance ratings also vary based on capacity, as you would expect, with the 250GB drive landing at the 150TBW mark and the larger 1TB hitting 600TBW. That’s half of what the 970 Pros are rated for, but should still be plenty for the overwhelming majority of consumer workloads.

The drives are also outfitted with a brand-new controller, dubbed Elpis. In addition to the aforementioned native PCI Express 4.0 interface, the new Elpis controller supports 4x the number of maximum queues as the Phoenix controller used on the 970 series (32 vs. 128). And the Elpis controller is manufactured on a leading-edge 8nm process.

The Elpis controller supports all of the features you’d expect from a modern SSD, like TRIM, garbage collection, S.M.A.R.T., etc., in addition to various encryption technologies as well. Depending on the capacity, all of the drives also feature 512MB to 2GB of discrete LPDDR4 DRAM cache. The 250GB drive seen here has 512MB (so does the 512GB drive) and the 1TB drive has 1GB on on-board DRAM. The forthcoming 2TB drive is the only one that’ll pack 2GB of DRAM.

The Elpis controller also has a nickel coating that helps to dissipate heat. And the underside of the drives has a thin copper plate hidden underneath that decal to aid in cooling as well – you can see the copper if you look closely around the edges of the decal.

Like previous-gen EVO-branded drives, the Samsung SSD 980 Pros feature TurboWrite technology. TurboWrite uses a portion of the NAND as an SLC write buffer, which results in improved write performance, as long as the buffer isn’t exhausted. With these drives, however, Samsung has tweaked the algorithm and TurboWrite capacities.

TurboWrite will allow the Samsung SSD 980 Pro drives to perform very well in the vast majority of consumer-class workloads. As you can see in the screen-capture above (taken from HD Tune using both the 250Gb and 1TB drives), writes are fastest when the TurboWrite buffer is being utilized, but once it is exhausted, write performance either tapers off or becomes somewhat more erratic.

Samsung warranties the SSD 980 Pro series drives for 5 years, which is in-line with previous-gen offerings. Anecdotally, in all of the years we have been evaluating Samsung SSDs, we have yet to have one fail. Every one of the Samsung drives we have on hand, including much older SATA-based solutions, is still functioning normally. 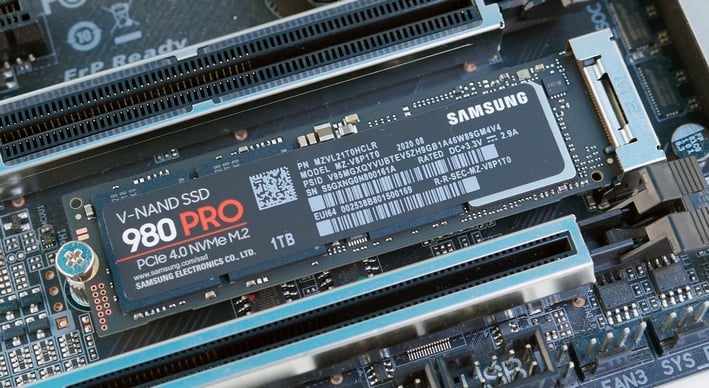 As we've noted in previous SSD articles, though IOMeter is clearly a well-respected industry standard benchmark, we're not completely on-board. The fact of the matter is, though our results with IOMeter scale properly, it is debatable as to whether or not certain access patterns actually provide a valid example of real-world performance. The access patterns we tested may not reflect your particular workload, for example. That said, we do think IOMeter is a reliable gauge for relative throughput, latency, and bandwidth with a given storage solution. In addition, there are certain highly-strenuous workloads you can place on a drive with IOMeter, that you can't with most other storage benchmark tools. 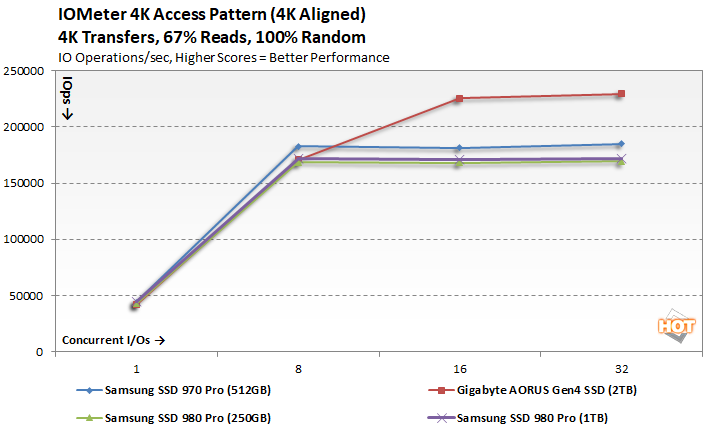 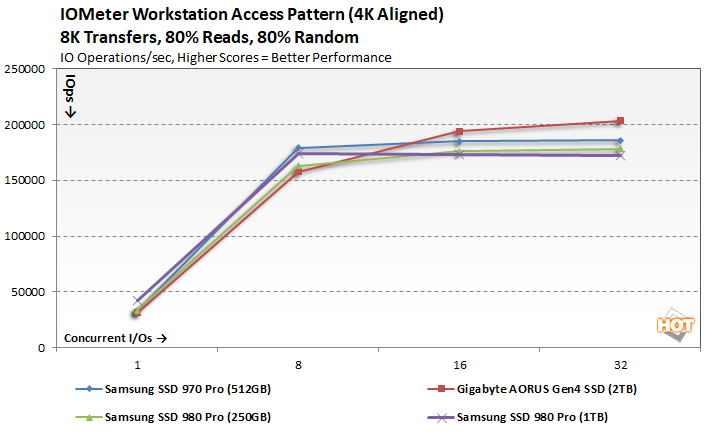 All of the drives we tested are somewhat tightly grouped here, save for the Gigabyte Aorus Gen4 NVMe SSD, which pulls out in front at the higher queue depths. The Samsung SSD 980 Pro 1TB drive does the best at QD1, however, which is where the vast majority of consumer workloads reside. 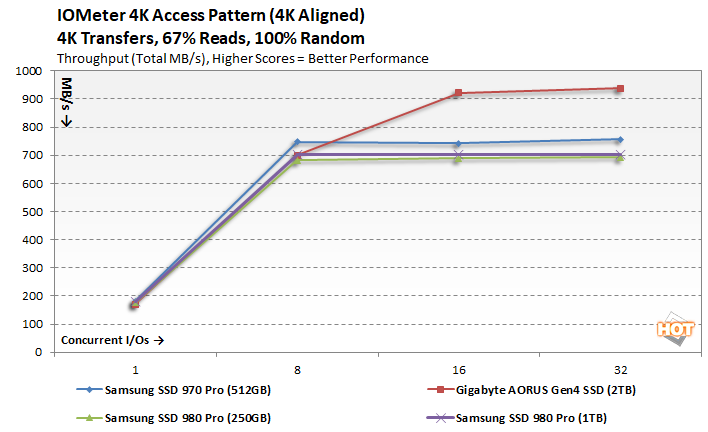 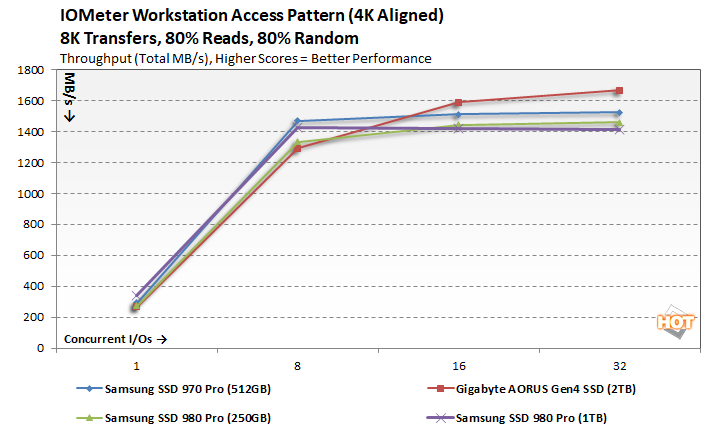 The actual bandwidth numbers are exactly in-line with the peak IOs, so the lines in the charts look identical. What you'll note is that 100% random 4K transfers trail the workstation access patter, which incorporates 20% sequential transfers. The overall performance trend is the same as the previous set of charts though. 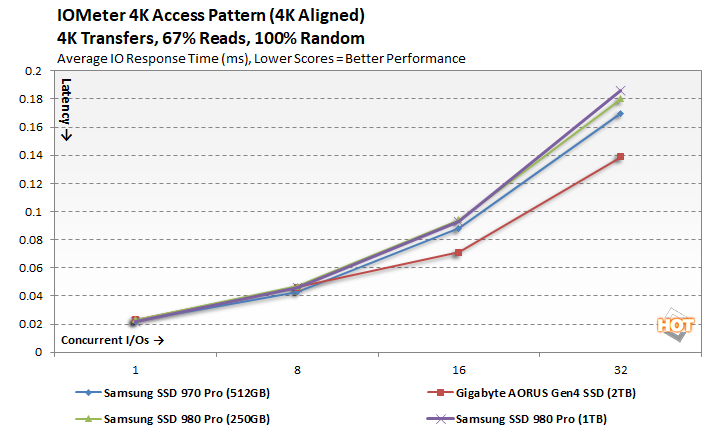 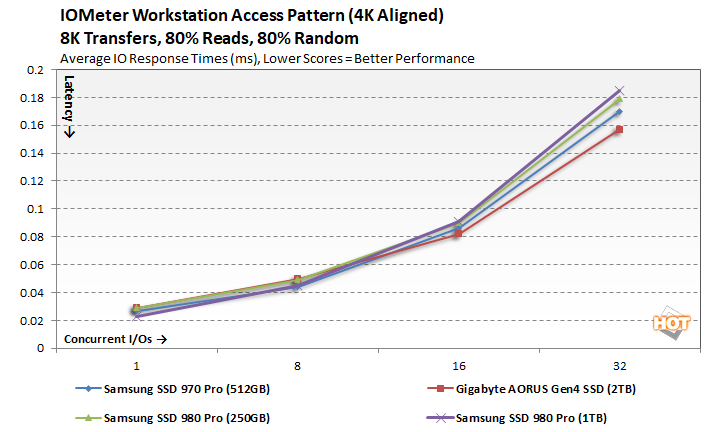 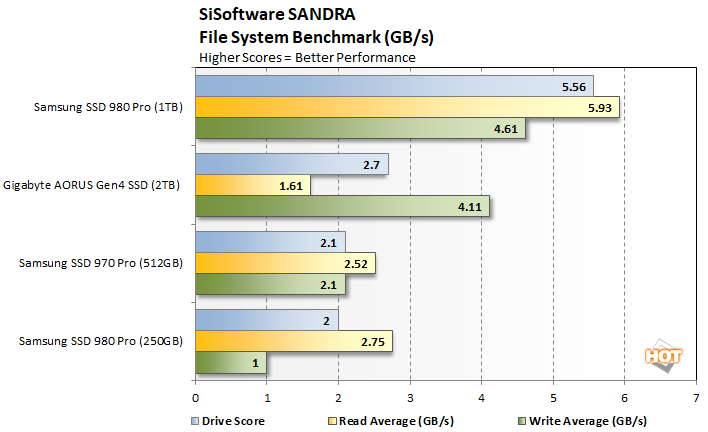 The 1TB Samsung SSD 980 Pro crushes all of the other drives here, with the fastest reads / writes, and the best overall drive score. The 250GB drive didn't play nice with this benchmark, however, and ends up trialing the 970 Pro. 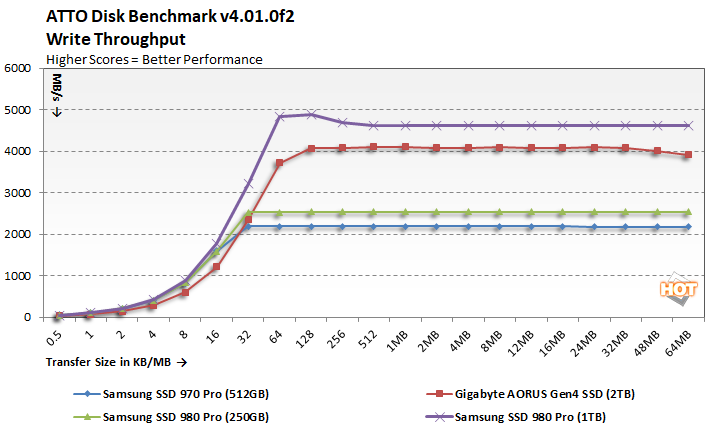 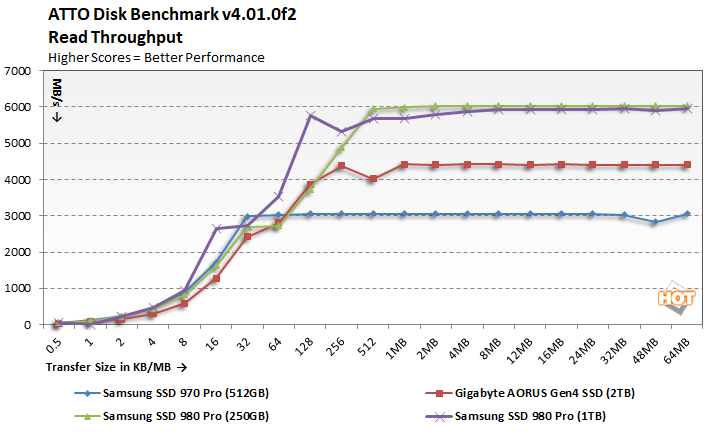 In ATTO's read and write bandwidth tests, the Samsung SSD 980 Pro drives clearly lead the pack in terms of peak reads. The drives find their stride around the 128K mark and then pull away. The 1TB 980 Pro also leads the pack in write performance. 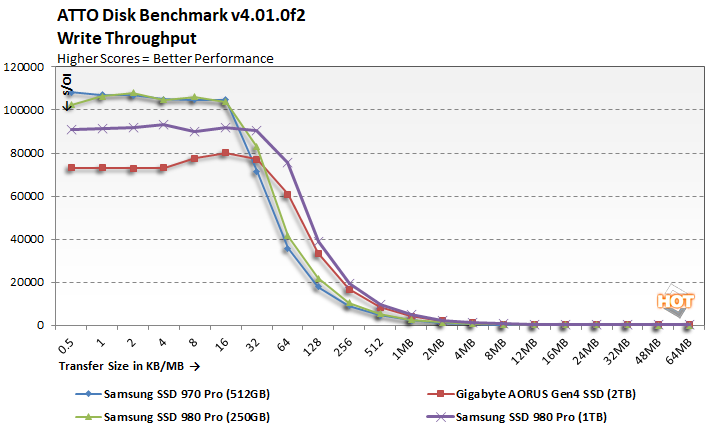 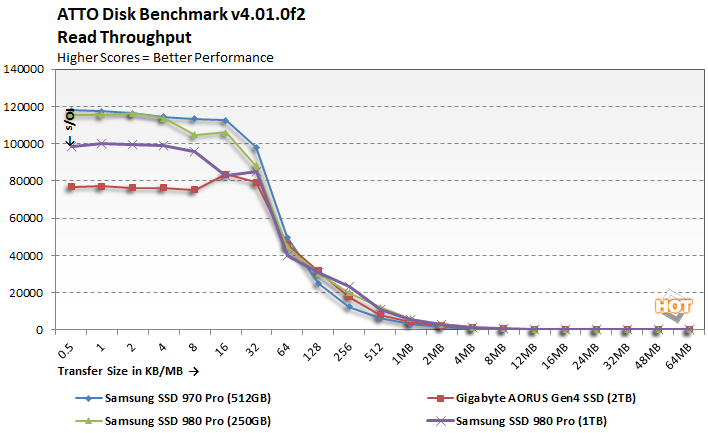 The Samsung SSD 980 Pro 250GB drive and 970 Pro offered similar IO performance in these tests, but the 1TB 980 Pro trailed with the lower transfer sizes, which is surprising. Still, the Samsung drives were significantly faster than the other PCIe Gen 4 drive here. 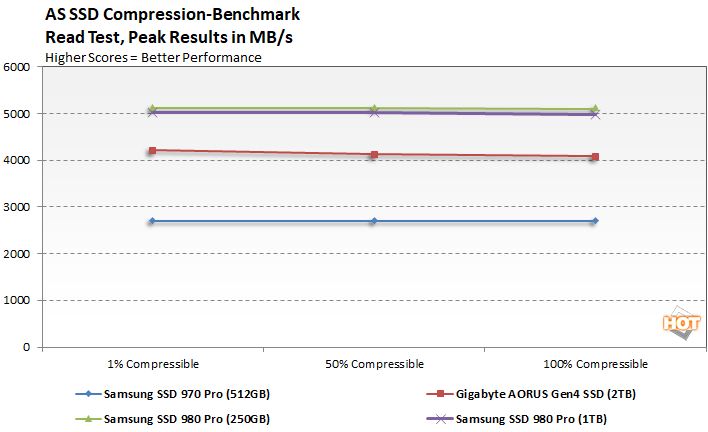 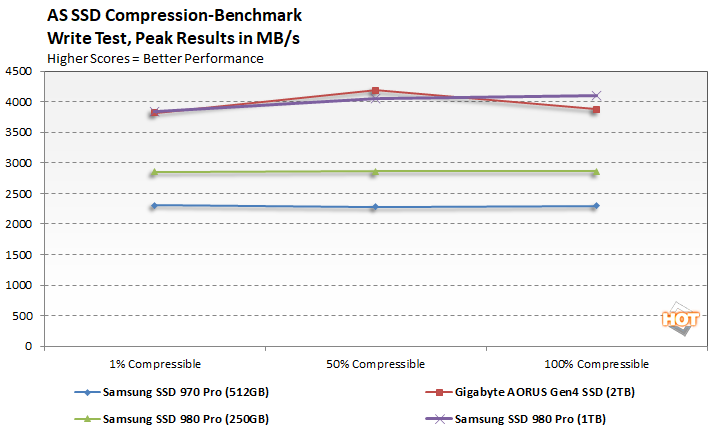 The compressibility of the data being transferred across the drives has minimal impact on performance. Once again we see the Samsung SSD 980 Pro drive sitting alone at the top of the charts in in the read test. In the write test, the smaller 250GB drive drops down a couple of rungs, but the 1TB drive remains on top.