We also spent some time overclocking the 3nd Generation AMD Ryzen Threadripper 3970X to see what kind of additional horsepower we could wring from the massive processor...

Manually overclocking a 3nd Generation Ryzen Threadripper processors is very similar to the previous-gen parts. Because the processors are unlocked, overclocking it is simply a matter of altering a few multipliers, tweaking voltages, and dealing with the additional heat and power requirements. These processors can also be overclocked by adjusting base clock frequencies though, so it's possible to fine tune the end result if you like to tinker and go the manual route. However, the easiest to achieve the most gain will come from tweaking multipliers. 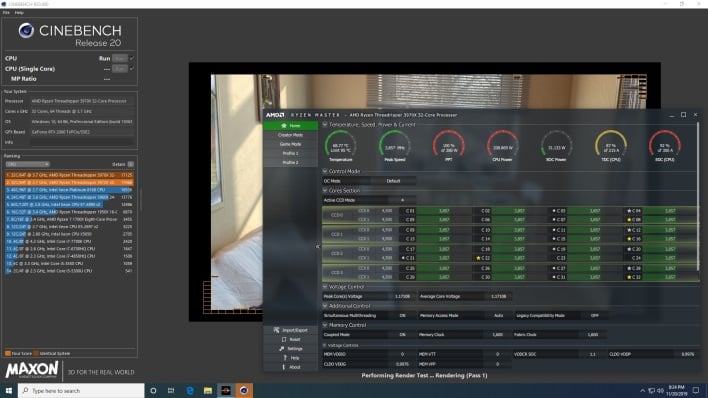 As was the case with the previous-gen Threadrippers, overclocking can be done from within the BIOS on enthusiast motherboards or via AMD's Ryzen Master utility. Ryzen Master gets another update with this launch, however, that's probably going to be appealing to users that like to maximize performance while also keeping on eye on their systems' temps, power usage, and frequencies. Above is a shot of the newest Ryzen Master running on the 3970X in the midst of a Cinebench R20 run. You can see the CPU, SoC, and PPT power metrics (among others), listed alongside temps, fan speeds, etc. right on the home screen. 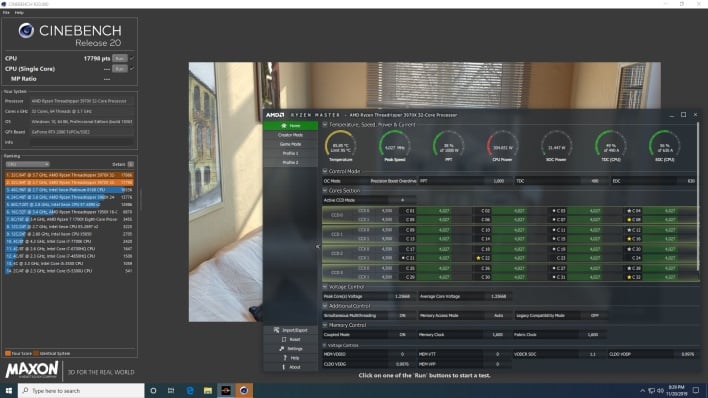 
When manually overclocking Ryzen Threadripper processors (and mainstream Ryzen processors), you lose support for features like Precision Boost and essentially lock the processors at a given max frequency, which may actually be lower than the maximum single-core Boost frequency. As such, you may end up losing some single-threaded performance if you manually overclock.

Like 2nd Gen Ryzen processors though, these new chips support Precision Boost Overdrive and Automatic Overclocking within Ryzen Master. With PBO, frequencies are dynamically adjusted and automatically managed, because SenseMI is left in control of the processor, and all of the clock gating and power conserving features in the processors continue to function. PBO also reads data embedded in the BIOS by motherboard manufacturers that outlines the maximum power limits of that particular board. Flip on PBO in Ryzen Master, crank up the power targets in-line with your motherboard's capabilities and your system's cooling, and overall system performance will be increased -- no muss, no fuss.  Auto Overclocking works similarly, just flip it on an go. Again, assuming you've got adequate cooling. 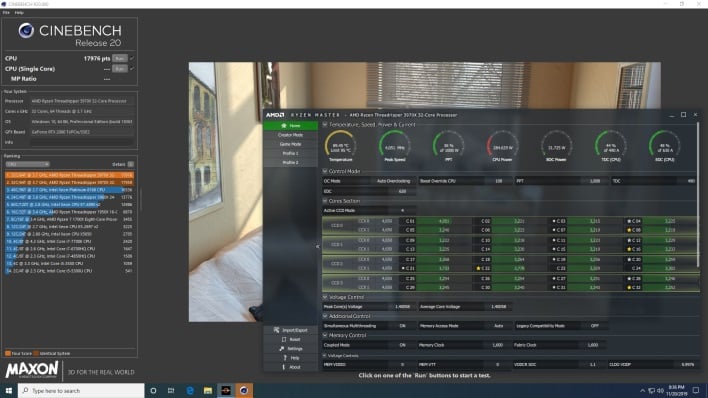 Because PBO and Auto Overclocking are so easy to use, maintain the processors' feature set when enabled, and will likely be the most popular overclocking method for these CPUs, we used them for our overclocking tests. This is a somewhat conservative approach to overclocking a Threadripper and should give you all an idea as to the “worst case scenario” overclock that just about anyone can expect. Our results should be repeatable, assuming you’ve got similar hardware and everything is working properly. Cooling duties were handled by a Thermaltake 360mm AiO liquid cooler and it turns out, it wasn't up to the task of pushing the 32-core Threadripper 3970X much further. Unfortunately, this cooler would get thermally saturated after extended benchmark sessions while overclocked and cause some throttling.

We enabled PBO (and Auto OC) and increased the power targets to the maximum values available with our motherboard (these values will vary from board to board depending on the robustness of its VRM and VRM cooling solution). During our endeavor, we should note that the processor operated in the 90-degree range when under sustained load, and idle temperatures hovered in the upper 30s, so temps were not an issue most of the time. Multiple, concurrent benchmark runs, however, were pushing the limits of out cooling setup. 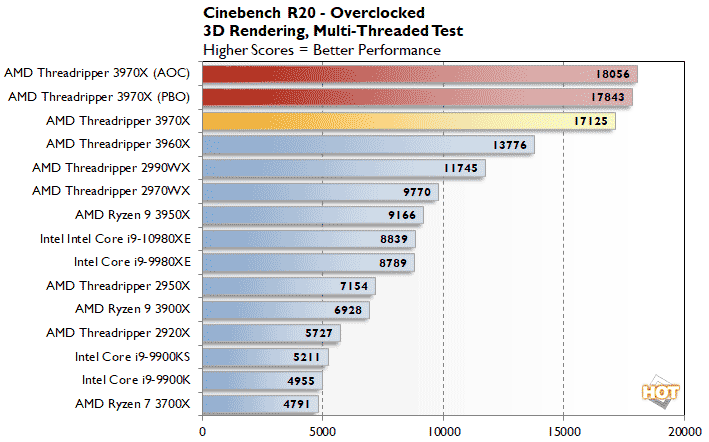 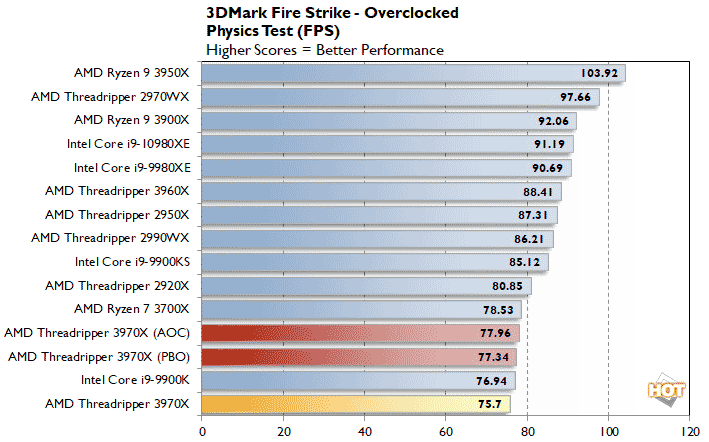 While we had the Threadripper 3970X overclocked, we re-ran a couple of benchmarks and saw some nice performance improvements. We broke 18,000 in Cinebench's MT test, which made it more than 2x faster than the Core i9-10980XE. The 3DMark Fire Strike Physics test also showed some gains, but that benchmark wouldn't behave properly on the many-core Threadripper, which resulted in relatively low scores.

Throughout all of our benchmarking and testing, we also monitored how much power our 3rd Gen Threadripper test system was consuming with a power meter, versus the other systems we used for benchmark comparisons. 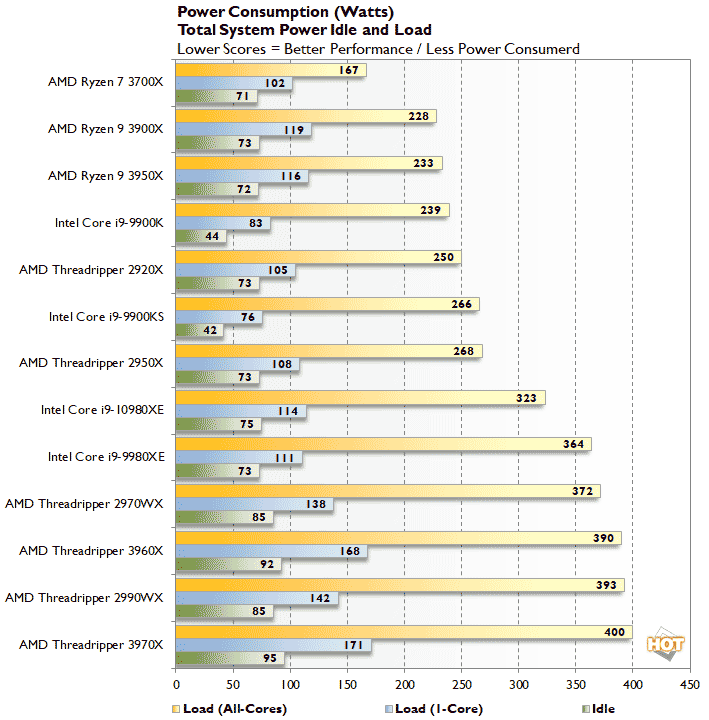 As we've seen with all 3rd Gen Ryzen processors so far, idle power is somewhat high relative to other platforms. Load power with these beefy 24-core and 32-core processors, whether with single or multi-threaded workloads, is also on the higher side, but in aggregate is actually quite good, relatively speaking. While the Threadripper 3960X and 3970X pull 26 - 36 more watts than a Core i9-10980XE, they do it with 33% - 77% more cores. And as we've seen, multi-threaded application performance is much better with the Threadrippers as well.

We also monitored power while overclocking with PBO and Auto OC and saw some huge jumps in consumption. While overclocked using PBO, the Threadripper 3970X's peak power consumption under load jumped up by 137 watts and with Auto OC mode enabled, power jumped by nearly 200 watts. With all of that silicon fired up and running out spec under their heat spreaders, these processors are going to need some serious cooling to keep things humming along properly. A top-notch power supply is also a must.