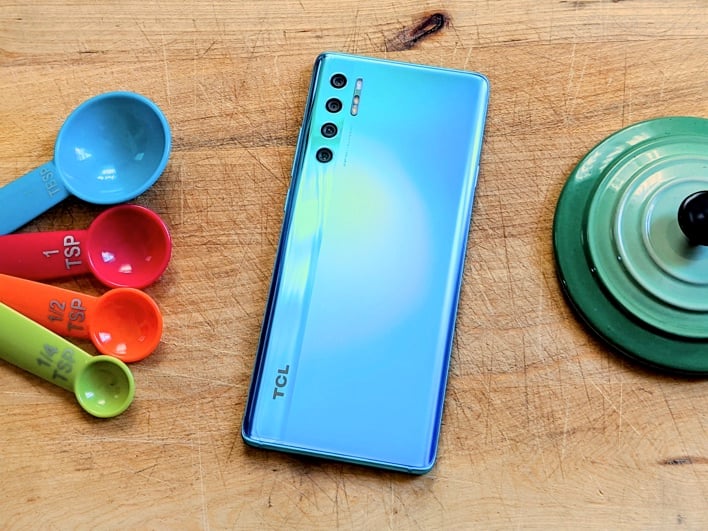 In 2020, TCL ventured beyond its successful TV business by launching three TCL-branded phones in the US -- the $450 TCL 10 Pro and $250 10L (which we both reviewed), followed by the $400 TCL 10 5G UW. The company is no stranger to mobile, having previously sold budget handsets under the Alcatel brand. But last year’s TCL 10-series was aimed squarely at Moto’s US mid-range lineup, and was quite competitive.

Then, at CES 2021, TCL announced the 20-series, which first landed in other regions, but is now available in the US with three phones -- the $500 TCL 20 Pro 5G, $250 20S, and $190 20SE. A lot has changed this past year. LG’s left the mobile space, and both Samsung and OnePlus have successfully carved out a share of the US mid-range market with the A-series and Nord-series, respectively. Can the 20-series keep TCL in the game?

Today we review the TCL 20 Pro 5G, which tops the 20-series with a Snapdragon 750G and a “waterfall” AMOLED display, but also boasts a few unexpected features for a $500 handset, like optical image stabilization, wireless charging, plus a sleek glass and aluminum design. Is this premium mid-range strategy the right move for TCL? Let’s find out.

Other than a different rear camera layout, the TCL 20 Pro 5G inherits most of last year’s TCL 10 Pro’s sleek design and premium materials. And that’s very welcome. Put the 20 Pro 5G next to any current $1k phone and it fits right in. It’s a proper glass and aluminum sandwich, something that’s not even the norm on flagships anymore -- we’re looking at you plastic-framed OnePlus 9 and plastic-backed Samsung Galaxy S21 .

Like last year’s 10 Pro, the 20 Pro 5G’s quad shooters are lined up in a row and mounted flush with the rear glass. But instead of being arranged horizontally, the row of cameras is rotated 90 degrees in a vertical layout. Most of the glass back is frosted, except for a mirrored stripe along the left side, one third of which incorporates the shooters plus flash LEDs. It’s really striking, and reminds us of the Realme 7 5G. 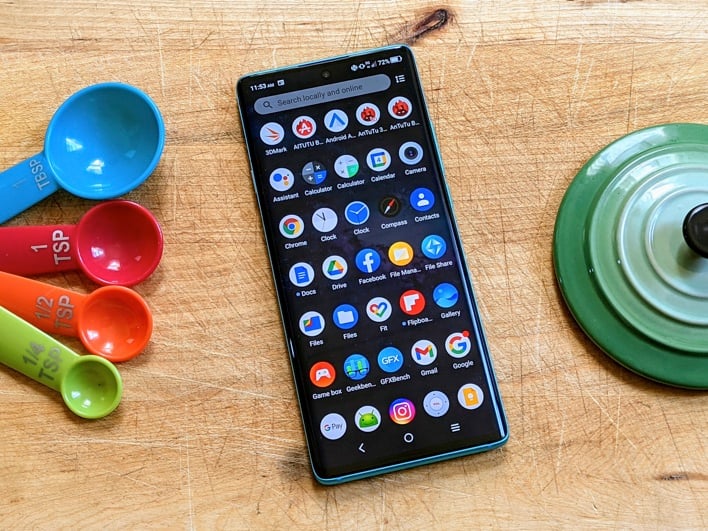 Just like its predecessor, the 20 Pro 5G packs a 1080p AMOLED screen with curved edges, narrow bezels, and a small chin, but it’s 0.2-inch larger and replaces the 10 Pro’s teardrop notch with a more up-to-date center punch hole. We aren’t fans of “waterfall” displays, but we can’t deny it suits the 20 Pro 5G’s flagship aesthetic, not to mention, it makes big handsets like this one narrower and easier to grip. 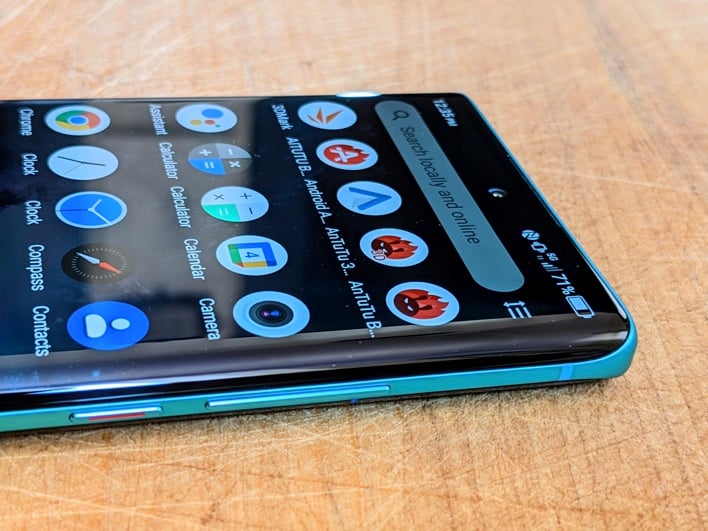 Looking around the perimeter of the 20 Pro 5G, you’ll find the color-matched volume rocker and power/lock button (with a classy red accent) on the right side, and a silver programmable smart key on the left. More on this later. Along the bottom edge, there’s a mono speaker, primary mic, USB Type-C port, and combination nano-SIM / microSD tray. The headphone jack (surprise!), IR transmitter, and secondary mic are located on top.

Overall, the 20 Pro 5G’s design is pleasantly refined for a $500 phone. It looks attractive and feels nice in hand. As a bonus, it’s even IP52 splash resistant.


Here's our unboxing video before we jump into the specs...

The TCL 20 Pro 5G uses a 6.67-inch FHD+ (2400 x 1080 pixels, 395ppi, HDR10) AMOLED panel with a 20:9 aspect ratio and curved edges that’s manufactured in-house. Bezels are slim, the chin is reasonable, and the “waterfall” is thankfully minor. A center punch hole is home to the selfie camera. It’s a very nice display, with vibrant colors, deep blacks, and good viewing angles. Brightness is acceptable in direct sunlight, but isn’t outstanding. 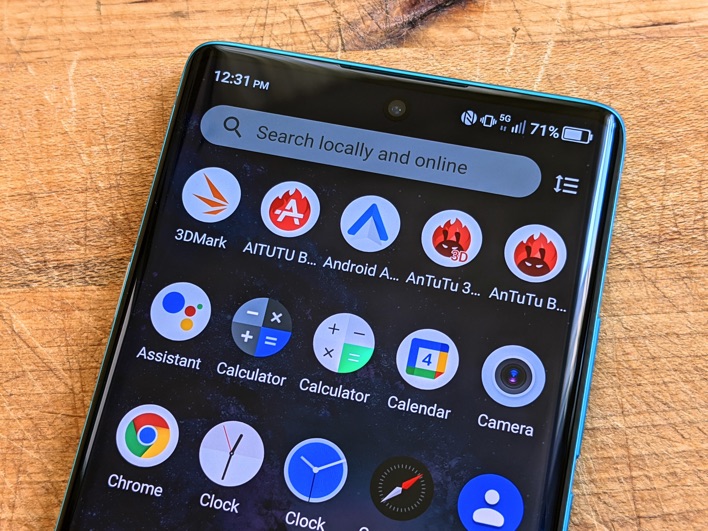 In addition, the 20 Pro 5G features TCL’s NXTVISION 2 engine, which pairs Pixelworks’ i6 chip with custom algorithms to enhance on-screen media and gaming content, and convert standard dynamic range to HDR. This display’s only significant downside is its basic 60Hz refresh rate. 90Hz+ is pretty much table stakes for a standout $500 handset these days -- it’s even available on budget devices like the $240 OnePlus Nord N200 5G. 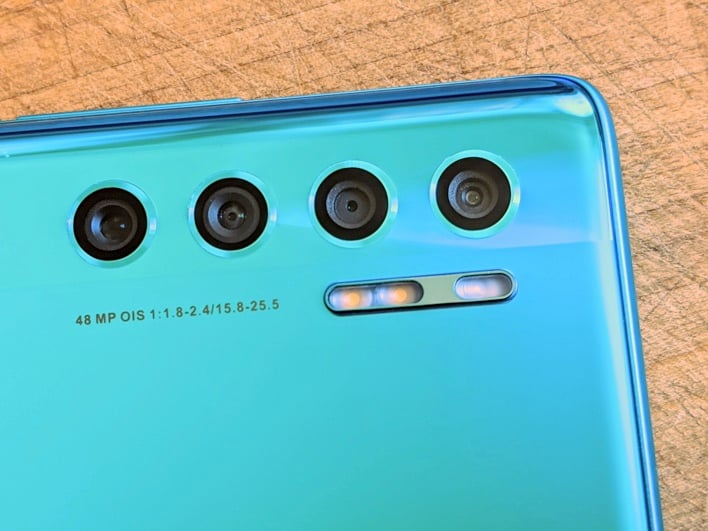 Unfortunately, this decent hardware is let down by lackluster imaging software, and the results are a mixed bag. Pictures are generally pleasant, but exposure, and especially shadows and highlights, are sometimes off. Colors are muted and white balance is inconsistent between the various cameras. We know Sony’s IMX 582 can capture phenomenal images, and we see a glimmer of this here, with superior detail and dynamic range.

Low light and zoomed shots exhibit excellent clarity, no doubt thanks in part to OIS. Zooming is totally usable at 5x, and 2x photos are superb. Once again, we cannot overstate the importance of optical image stabilization. These images often best what the OnePlus 9 captures without OIS in the same conditions. Selfies are surprisingly clean, but the ultrawide and macro aren’t spectacular. The latter, in particular, tends to underexpose shots.

We primarily tested the TCL 20 Pro 5G on T-Mobile’s sub-6GHz 5G network in and around San Francisco. Reception was problem free, calls were loud and clear, and data speeds were in line with other 5G devices on T-Mobile. While this phone doesn’t support 5G for AT&T, it’s scheduled to gain access to Verizon’s sub-6GHz 5G network with a future software update. For now, it works fine on both AT&T and Verizon’s 4G LTE networks. 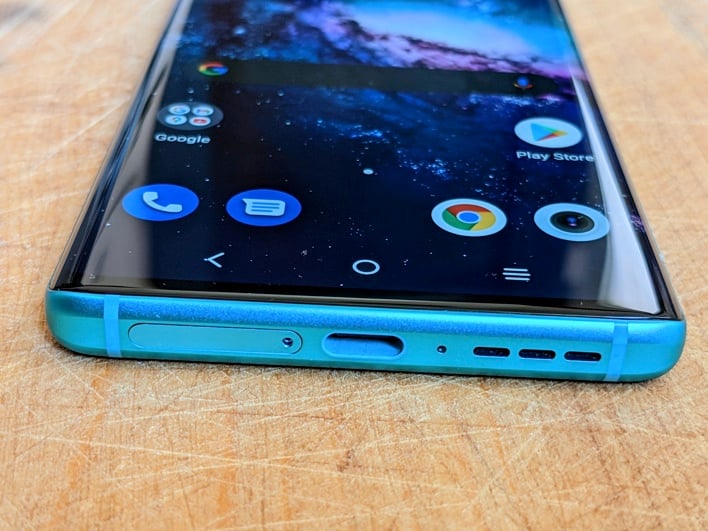 Considering the quality screen, we were also expecting the 20 Pro 5G to have stereo speakers, with the earpiece doubling as the second driver, but that's not the case. That being said, the bottom-firing mono speaker sounds loud and clear. Most importantly, this handset includes a headphone jack with a decent DAC and amp that’s capable of driving a wide variety of wired headphones and earbuds. LDAC and aptX HD are also on deck for lossless wireless audio over Bluetooth.

The TCL 20 Pro 5G is powered by Qualcomm’s Snapdragon 750G SoC, coupled with 6GB of RAM and a generous 256GB of storage (plus microSD support up to 1TB). It’s the same chip we saw on the Moto One 5G Ace earlier this year, and it performs similarly -- slotting near or just below the popular Snapdragon 765/G. 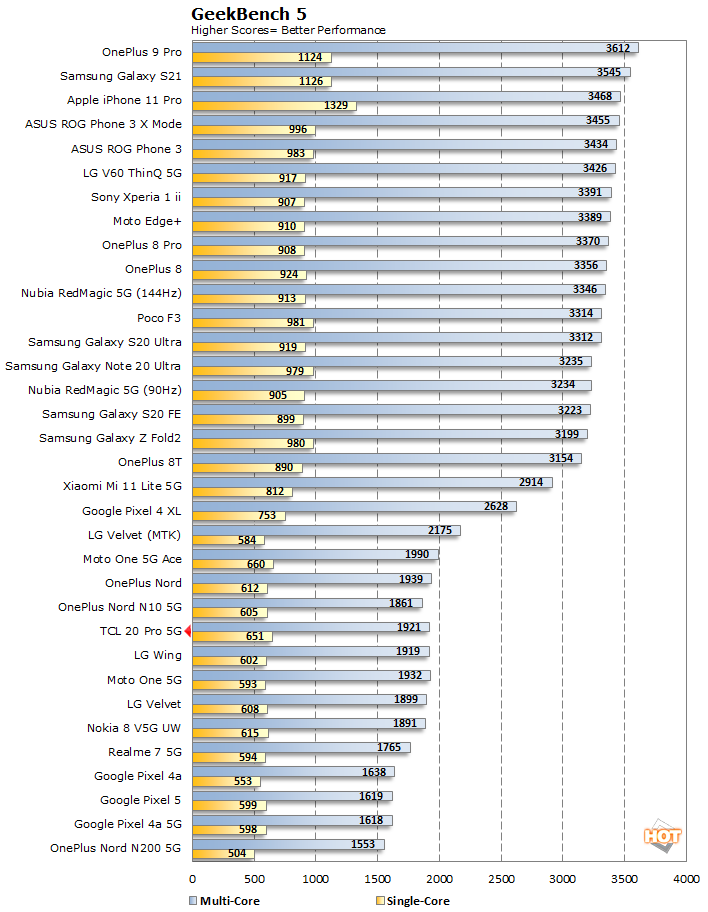 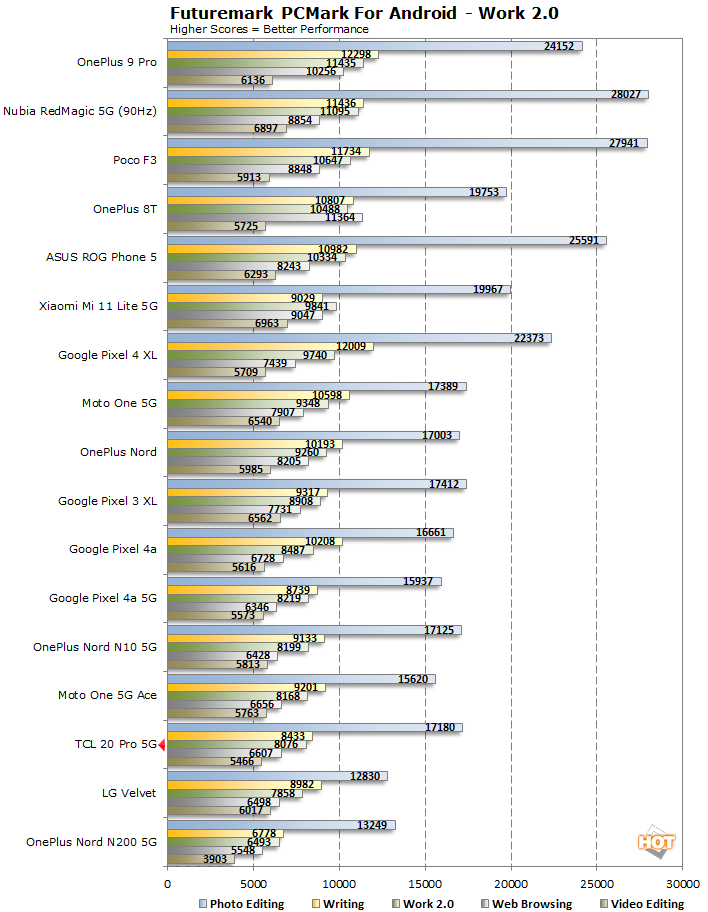 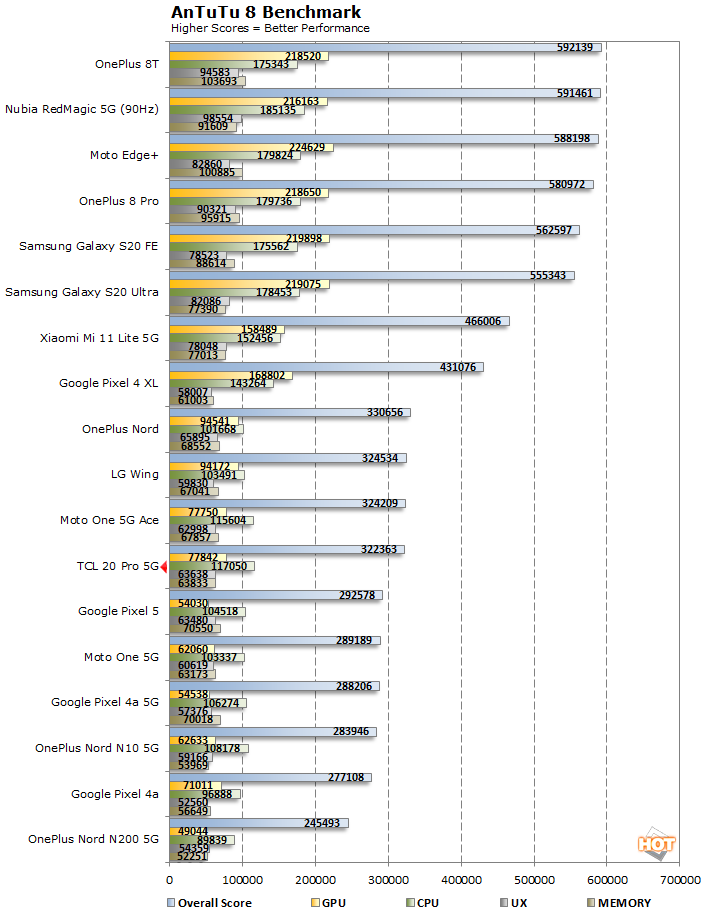 A simple round of processor and system level benchmarks confirmed this, placing this phone squarely in the middle of the pack. 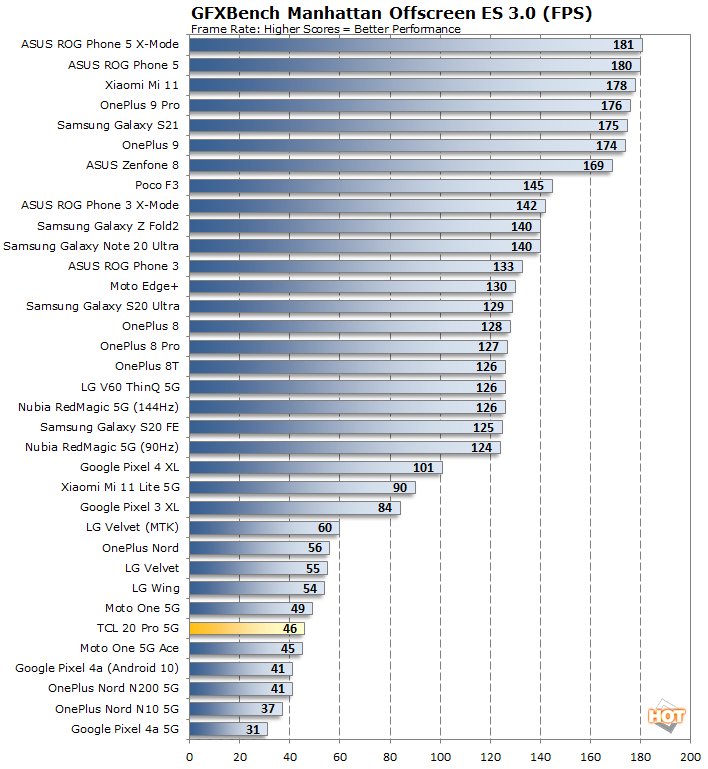 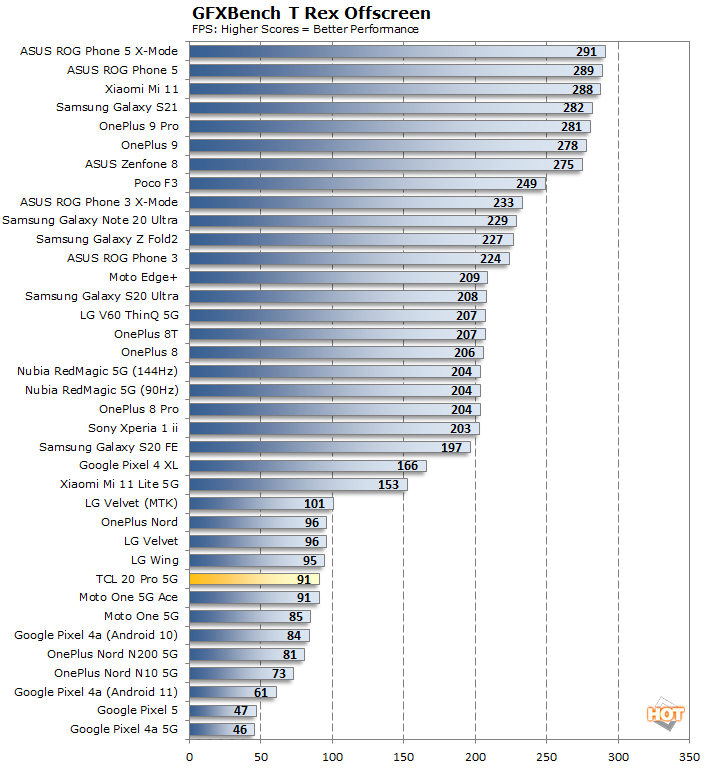 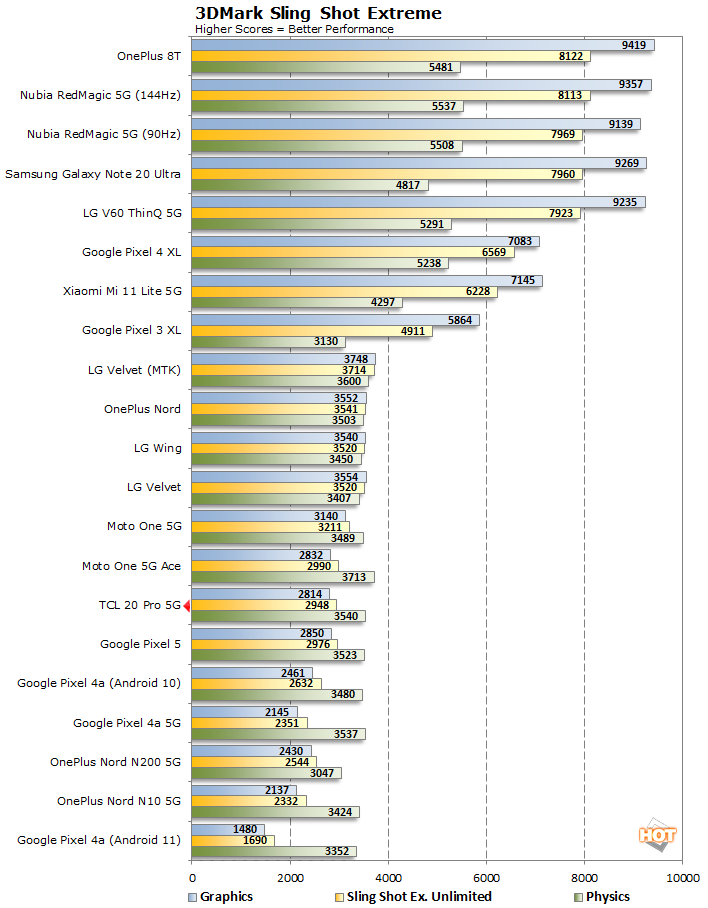 We don’t have any complaints in terms of performance. It handled everything we threw at it without stutter -- from our usual work and social media apps to games like PUBG Mobile. Obviously, it’s never going to feel as slick as mid-range handsets with 90Hz+ refresh rates and highly optimized software (hello OnePlus Nord), or satisfy hard-core gamers, but we think most folks will be happy with the 20 Pro 5G’s performance.

Battery life is fine, but not spectacular. While the 20 Pro 5G’s 4500mAh cell will usually last an entire day on charge; the Moto One 5G Ace easily delivers two days of battery life with just 500mAh more. It’s not a big issue, but we were expecting more. On the plus side, you get 18W wired charging (Quick Charge 3.0) -- with an 18W charger in the box -- plus 15W Qi-compatible wireless charging, which is unusual in this category.

The remaining specs are par for the course. with sub-6GHz 5G, 4G LTE, WiFi 5 (802.11ac), Bluetooth 5.1 LE (with Super Bluetooth), NFC, an FM radio, and dual-band A-GPS / GLONASS / Beidou / Galileo positioning, plus the standard roster of sensors. Haptics are excellent, and complement the 20 Pro 5G’s premium vibe. The optical in-display fingerprint sensor is fast and reliable, and so is face unlock.

On the software front, the 20 Pro 5G runs TCL UI 3.0 on top of Android 11. While there’s nothing terribly wrong with this skin per se -- it’s reasonably clean and responsive -- it’s simply not as refined as the rest of the phone. Basically, the UI feels incoherent and haphazard, mixing completely stock elements with highly customized tweaks. This contrast is somewhat jarring, and detrimental to the overall experience, though it certainly won't be a deal-breaker for most users.

The TCL 20 Pro 5G shares a lot of software features with its predecessor, so we invite you to read our TCL 10 Pro review for a deeper look. We also mentioned the smart key earlier. It can be configured to launch an app or trigger an action with a single press, double press, or long press -- making it easy to quickly launch Google Assistant or the camera app, etc. Super Bluetooth also lets you connect up to four audio devices simultaneously for synchronized playback, which is a nice feature. 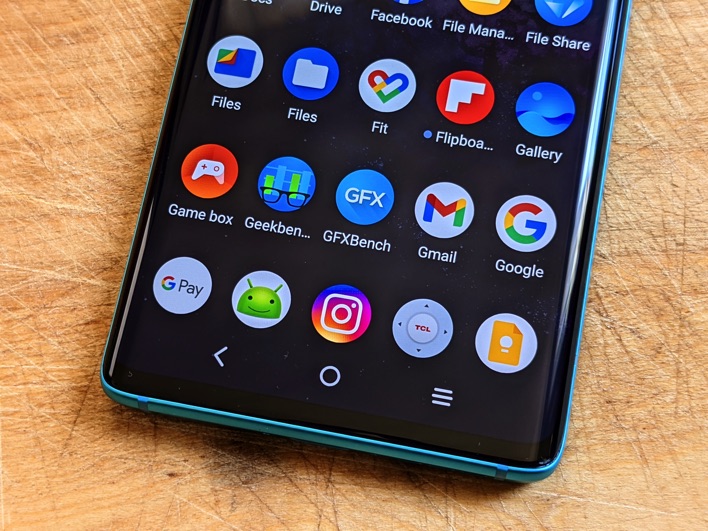 Mini notifications are new this year, and let you replace the familiar Android notifications with less intrusive bubble notifications on a per-app basis. And speaking of apps, the 20 Pro 5G keeps bloatware to a minimum, with just Booking.com, Facebook, Netflix, and Microsoft News coming pre-installed. Best of all, these apps can be uninstalled. In addition, you also get Google and TCL’s apps, including a useful IR remote app.

Finally, TCL is promising a minimum of two major Android OS upgrades and two years of security patch updates for the 20 Pro 5G, which is fantastic news.

With the 20 Pro 5G, TCL delivers an interesting value proposition, a sleek but affordable ($500) handset with a premium glass and aluminum design, mid-range specs, and a few category-leading features like OIS and wireless charging. There’s nothing else quite like it, and that’s the appeal. Beyond the attractive looks and refined hardware, we also like the 20 Pro 5G’s IP 52 rating, quality display, headphone jack, and generous (256GB) storage. 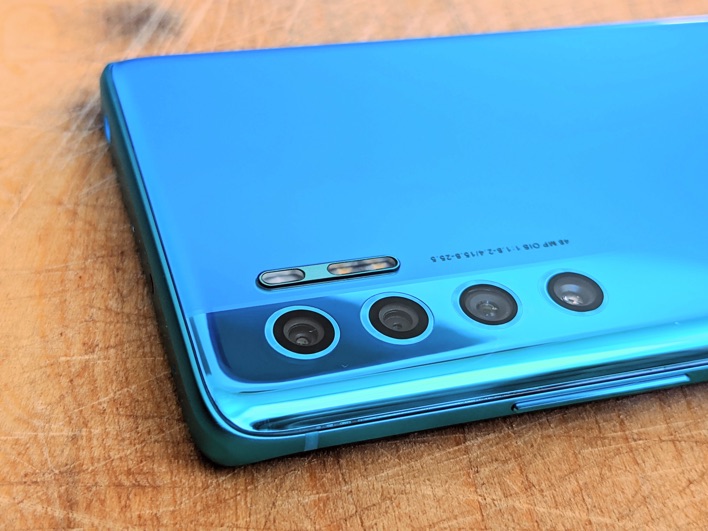 On the other hand, we’re not fond of the 20 Pro 5G’s low (60Hz) refresh rate, inconsistent shooters, limited 5G support, mono-only speaker, average battery life, and disjointed software experience. As such, it’s not easy to outright recommend, especially when Google’s superb Pixel 4a 5G and Samsung’s potent Galaxy A52 5G exist, and both also cost $500.

With all of that said and done, TCL is on the right track with the 20 Pro 5G, we'd just like to see the software catch up with the hardware. Third time’s gonna be the charm, right?