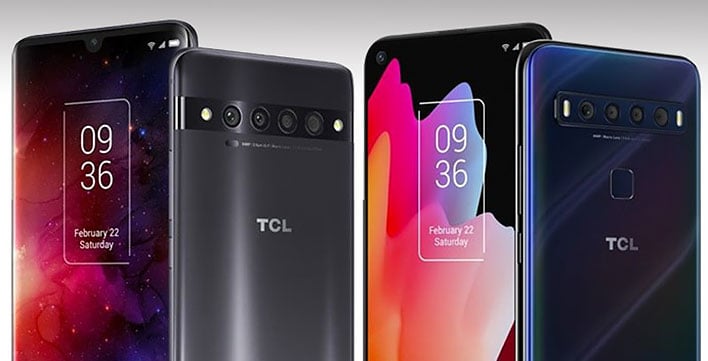 What do the Alcatel, BlackBerry, and Palm smartphone brands all have in common? They’re all owned by Chinese electronics giant TCL -- which also manufactures products under the RCA brand in the US. TCL is best known for its stratospheric rise in the TV business, where it regularly battles with LG for second place in terms of number of TVs shipped globally (Samsung being number one). It also designs and manufactures its own display panels, unlike many other TV brands, which is no small feat. Anyway, back to smartphones...

Alcatel makes budget phones sold by various carriers and MVNOs -- mostly for the prepaid market. BlackBerry experienced a bit of a comeback under TCL back in 2017/18 with its excellent KEYone and KEY2 Android handsets. Palm returned as a startup backed by TCL in 2018, launching a tiny “companion” phone that was initially exclusive to Verizon. And at IFA 2019, the company announced the Plex, its first TCL-branded Android handset. This was followed by TCL’s 10-series at CES 2020, which brings us to today’s review. 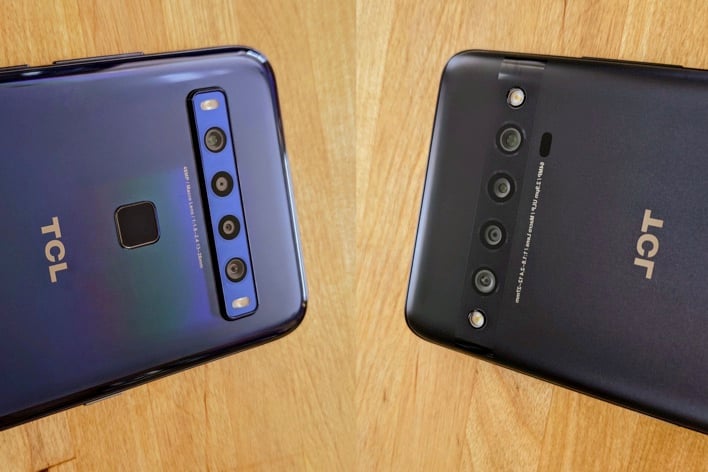 Props to TCL for creating a unique design language for the 10-series. But it all started with the Plex, which first boasted a horizontal “camera band” along the back of the phone. The 10-series bumps the number of lenses in this space from three to four, and carries over the two LED flash modules that bookend the cameras. Both handsets also mostly share the same button and port layout. But that’s where the similarities end -- the 10L and 10 Pro are really quite different once you take a closer look.
The 10L uses a molded plastic frame squeezed between a flat glass screen and a striking curved edge acrylic back. It features a 6.53-inch 1080p LCD with a 16MP punch hole selfie camera in the top left corner. On the 10L, that rear camera band is more of a pod, and sticks out slightly. It’s home to a 48MP main shooter, an ultrawide, a macro, and a depth sensor. The SIM/microSD tray is located next to the Smart Key on the left side of the phone. Just one color option is available at launch, and that’s Mariana Blue.
Meanwhile, the 10 Pro is a premium glass and aluminum sandwich with curved edges front and back. It packs a 6.47-inch 1080p AMOLED “waterfall” display with a teardrop notch for the 24MP selfie camera. Here the shooters are all mounted flush within the camera band, with only the flash modules protruding slightly. This includes a 64MP main sensor, an ultrawide, a macro lens, and a low light shooter. Ember Gray is the only hue choice available for now, and it gives the 10 Pro’s glass back a satin-like, silver to black gradient finish. Classy.
Unfortunately, this also means the incredible shade of green we saw at CES 2020 won’t be available at launch. The 10 Pro’s SIM/microSD tray is located along the bottom, next to the USB Type-C connector, and it also features an IR transmitter next to the 3.5mm headphone jack on the top edge. Both handsets have a programmable Smart Key on the left side, a power/lock button and volume rocker on the right, a headphone jack and secondary mic on top, plus a USB Type-C port, primary mic, and mono speaker on the bottom.
The 10L adds a square capacitive fingerprint sensor below the camera pod in the back (vs. an optical in-display fingerprint sensor on the 10 Pro). In turn, the 10 Pro includes a laser AF sensor right below the main shooter, which is missing on the 10L. Also keep in mind that at 162.2 x 75.6 x 8.4mm, the 10L is a little taller, wider, and thinner than the 10 Pro (158.5 x 72.4 x 9.2mm), making it slightly harder to use one-handed. The 10 Pro also packs a larger 4500mAh battery (vs. a 4000mAh cell on the 10L). Neither phone is water-resistant.
Overall, the 10 Pro feels much better, but if you can get past the all-plastic construction, the 10L looks fine, especially for $200 less. Both handsets come with a transparent TPU case, which is a nice touch -- as long as you don’t mind TCL’s “display greatness” motto spattered diagonally on the back of each case. It’s a bit much, just like the “never settle” brand inscribed on the OnePlus 8 Pro’s bundled case.

On the 10L, you’ll find a 6.53-inch FHD+ (2340 x 1080 pixels, 395ppi) 19.5:9 aspect ratio LCD (LTPS) that’s completely flat. It features reasonably small bezels except for an obvious chin at the bottom. There’s a punch hole for the selfie camera in the top left corner, which gives this phone a fresh, modern appearance. Overall, this screen showcases TCL’s display expertise with punchy colors, nice contrast (for an LCD), and decent viewing angles. Brightness is the only negative here, with the screen getting washed out in direct sunlight.

The 10 Pro uses a TCL-made 6.47-inch FHD+ (2340 x 1080 pixels, 398ppi) 19.5:9 aspect ratio AMOLED panel with curved edges. As we’ve mentioned in other reviews, we’re not fond of “waterfall” displays, but it’s mild here -- keeping the bezels slim and the bottom chin to a minimum. The selfie camera lives in a teardrop notch centered at the top of the panel. It’s a nice screen, with vivid colors, inky blacks, and good viewing angles. Best of all, it’s reasonably bright in direct sunlight.
Both handsets also include TCL’s NXTVISION engine, which combines a chip from Pixelworks and proprietary algorithms to optimize the display for media consumption and convert standard dynamic range to HDR. The 10 Pro’s display is also HDR10 compliant.
Now let's discuss the cameras in detail...