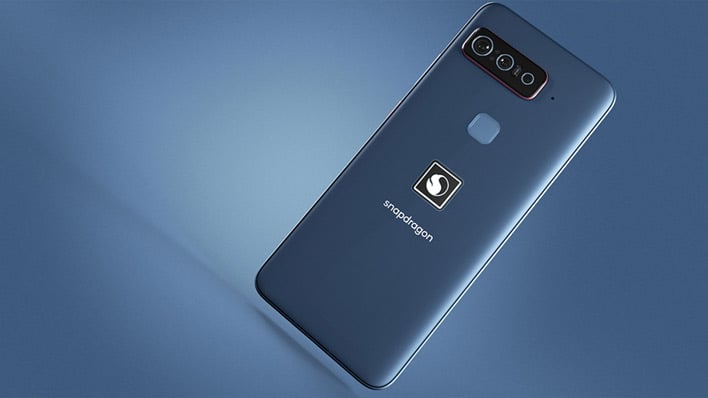 Although a number of leaks hinted at is existence, it wasn’t until early last month that ASUS and Qualcomm made the Smartphone For Snapdragon Insiders official. According to Qualcomm’s website, its Snapdragon Insiders program is already 1.5M+ members strong. The program, which is meant to directly engage with Snapdragon enthusiasts, consists of regular email newsletters and exclusive invitations to contests, influencer events and AMAs with product experts.

The new flagship phone packs Qualcomm’s Snapdragon 888 mobile platform into a sleek, large-phone form factor that’s somewhat of a cross between ASUS’ understated ZenFones and over-the-top ROG Phones for gamers. Check out the Smartphone For Snapdragon Insiders in our hands-on video below and then we’ll dig in further and see if the device hits the mark...

Find Snapdragon-Powered ASUS Smartphones @ Amazon
The Smartphone For Snapdragon Insiders’ main features and specifications read like many of today’s flagship devices, save for a couple of caveats. 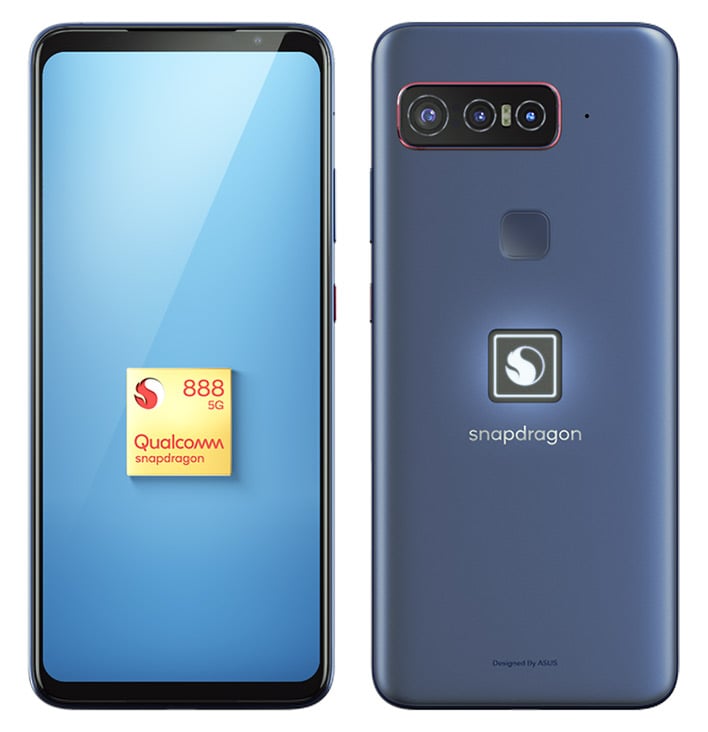 The device is powered by Qualcomm’s Snapdragon 888 mobile platform – not the current, slightly higher-end 888+. We’re told the only reason the original 888’s use was because of timing; ASUS was simply too far along in the design of the Smartphone For Snapdragon Insiders to make the switch. Still, the differences between the 888 and 888+ are minor (only a small bump in core frequencies), so that’s of little concern. 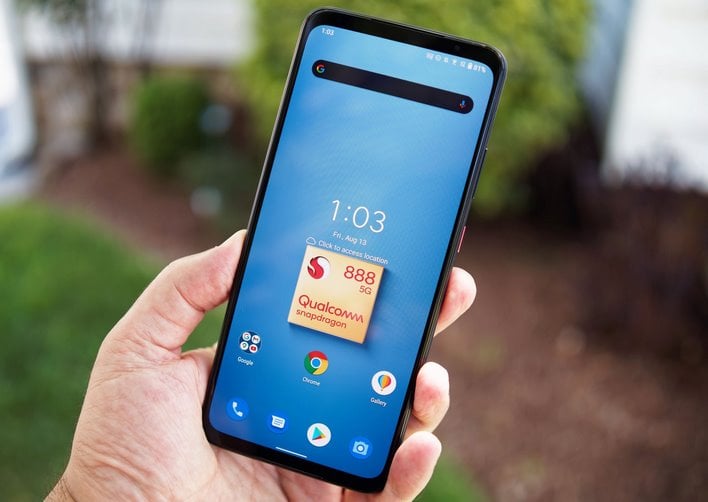 Other specs include 16GB of LPDDR5 memory, 512GB of UFS 3.1 storage, a 24-megapixel front camera (0.27mm equivalent focal length in 35mm film), and three rear cameras consisting of a Sony IMX686 64-megapixel main sensor, Sony IMX363 12-megapixel ultra-wide, and an 8-pixel shooter with a 3x optical zoom and 12x total zoom. Relative to most other flagships, that is a ton of memory and plenty of internal storage, and as you’ll see on the next page, all of the cameras are well appointed too. Unfortunately, storage isn’t expandable via microSD cards, but with 512GB of fast internal storage, most users should be fine.

The Smartphone For Snapdragon Insiders is also outfitted with a beautiful 6.78-inch OLED display (made by Samsung) with a 2448x1080 native resolution, up to 144Hz refresh rate, and 1ms response time, with Corning Glass Victus providing the protection. The display is sharp, accurate, responsive, has wide viewing angles and is quite bright. With up to 1200-nits of peak brightness (800-nits outdoor-readable brightness), this phone remains easy on the eyes, even under bright sunlight. 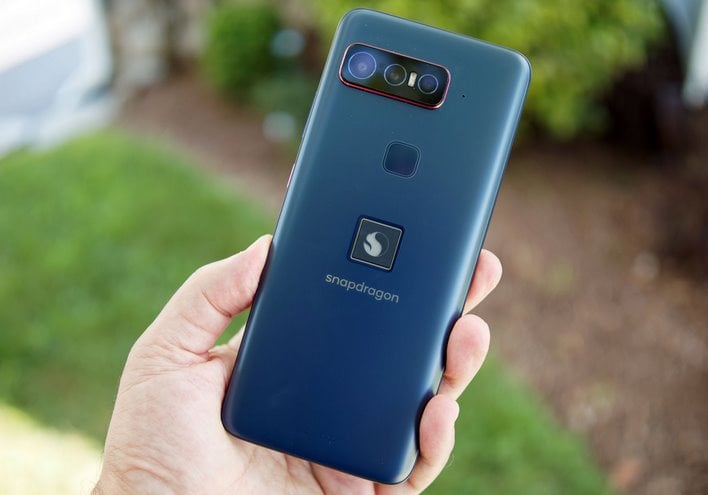 All of the navigation, sensors, and wireless connectivity a user would need is present as well. The Smartphone For Snapdragon Insiders has integrated Wi-Fi 6E (802.11a/b/g/n/ac/ax, 2x2 MIMO) and Bluetooth 5.2 with support for Qualcomm aptX Adaptive and Snapdragon Sound technology. The phone also supports virtually all network / RF bands (GSM/GPRS/EDGE; WCDMA/HSPA+/DC-HSPA+; FDD-LTE; TD-LTE; 5G Sub 6 SA/NSA; 5G mmWave) with Carrier Aggregation with 4x4 MIMO support. There is a dual SIM card slot on the phone as well, for greater flexibility, should you need it.

The Smartphone For Snapdragon Insiders comes in an attractive midnight blue matte finish, with a Snapdragon jewel embedded on the back. Red trim accents the rear camera bump-out and the 3D sonic fingerprint sensor, also on the rear, is a slightly darker blue with an ultra-smooth, glossy finish. The left and top sides of the device lack any noteworthy features, save for a lone mic input on top. The right side is home to the power / lock button and volume rocker and the bottom houses the dual SIM tray, another mic, a speaker port, and the USB charge / sync port. No headphone jack is to be found.

The speaker port on the bottom is complemented by another driver up top, situated above the display. The stereo output from these two speakers is surprisingly good for a smartphone. Deep bass is lacking, just like every other smartphone, but mids and highs are sharp and crisp; human voices specifically sound particularly well.

The Smartphone For Snapdragon Insiders measures 173.15 x 77.25 x 9.55mm and weighs in at only 210g. And powering everything is a 4000mAh. This is not the largest battery we’ve seen in a flagship phone, but still enough to provide competitive battery life with certain settings, as you’ll see a little later. Sadly, there's no wireless charging support and there's no official dust / water resistance rating to speak of either.

Included with the Smartphone For Snapdragon Insiders, customers will find an array of bundled products and accessories. When the package is first opened, the phone itself is presented front-and-center, resting in a white, protective tray. 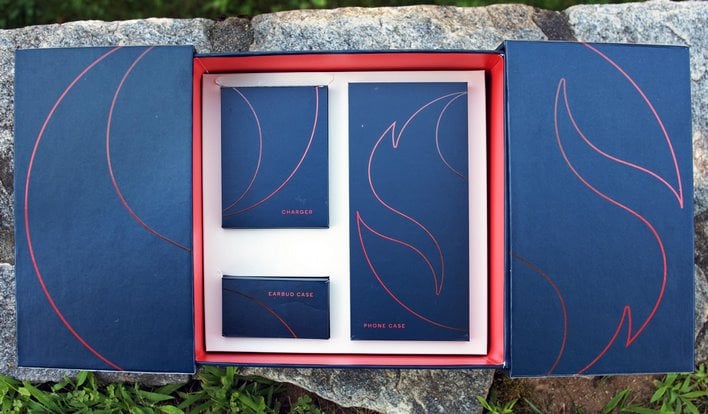 Lift that tray and a trio of additional boxes are revealed. In those additional boxes, customer will find a bumper-style phone case, a Qualcomm Quick Charge 5 65w power adapter (35W in India), a pair of braided charge and sync cables (USB-C to USB-C and USB-C to USB-A), and a high-end set of premium active noise cancelling true wireless earbuds from Master & Dynamic, with charging case and Snapdragon branding. 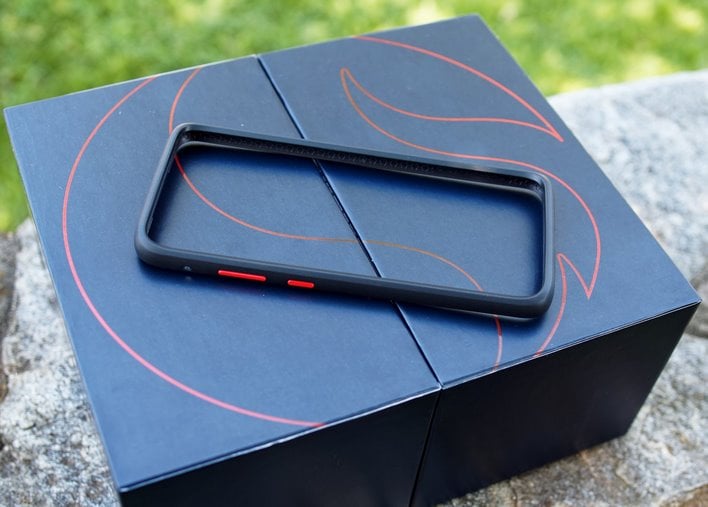 The phone case is a dark charcoal grey with red accents for the power / lock button and volume rocker. There’s not much to report about the bumper other than to say that it fits tightly, doesn’t hinder button function, and doesn’t add much bulk to the device. 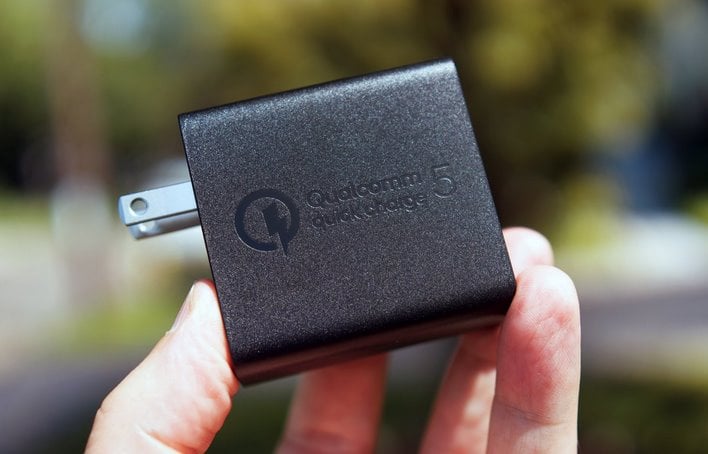 The included Qualcomm Quick Charge 5 65w power adapter looks just the majority of USB-C enabled chargers on the market, but wow is this thing fast when charging the Smartphone For Snapdragon insiders. With the included charger and cable, users can charge this phone for 50% battery capacity in only a few minutes. 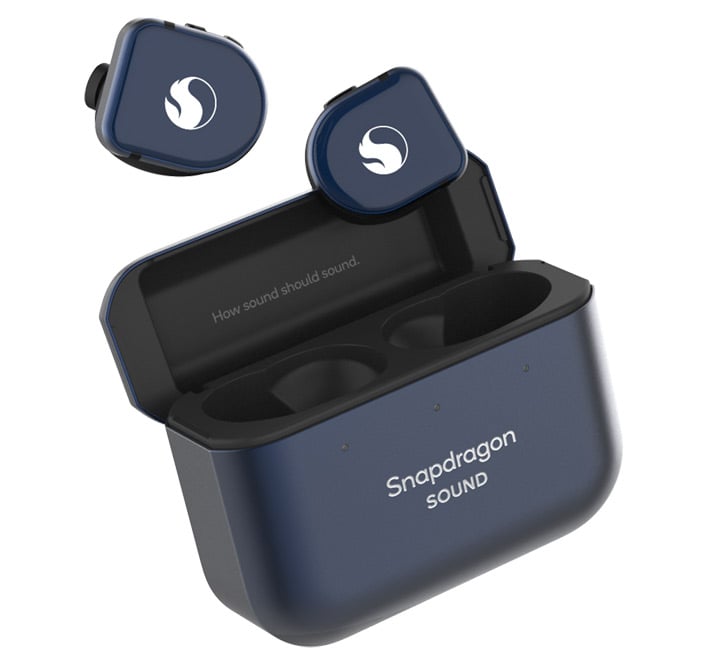 The included earbuds are a significant value adder as well. They appear to be identical to Master & Dynamic’s premium $299 MW08 ceramic and stainless steel buds, which feature hybrid active noise-cancellation and a 6-microphone array (3 in each ear) designed to minimize wind noise. The buds are also IPX5 rated for water resistance and feature fast-charging. The buds offer up to 12 hours of playtime normally or 10 hours with ANC enabled and they can be charged to 50% capacity in only 15 minutes (45 mins for a full charge). And the case provides up to an additional 30 hours of charge time.

Other features include Bluetooth 5.2 support with external antennas for and optimal wireless connection.

We found the included earbuds to be very good. Sound quality was among the best buds we’ve heard and fitment is solid. Of course, this is somewhat subjective, but there are a multitude of audio controls available to tune the output to your liking. That said, we should also mention that the set we received were pre-production and not fully Snapdragon Sound enabled. The final, retail-ready buds will afford the ability to stream high resolution 24x96 kHz audio and include support for super wide band voice for improved call clarity.

Underneath all of the aforementioned goodies, customers will also find some obligatory documentation (a User Guides and Warranty Cards) and a SIM ejection pin tool.

In addition to its high-end hardware, one of the more attractive features of the Smartphone For Snapdragon Insiders is likely to be is clean OS installation. The Smartphone For Snapdragon Insiders is outfitted with Android 11 right out of the box, with no cringe-worthy skins or over-stylized or intrusive customizations to speak of – short of the tweaks and menu additions necessary to control the device’s particular hardware configuration, it’s essentially running pure Android. 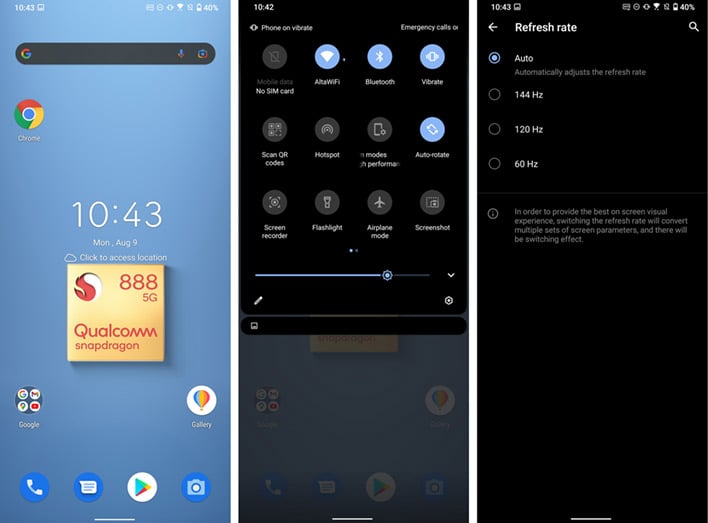 The default home screen on the Smartphone For Snapdragon Insiders is pictured here along with a screenshot of the default quick-settings shade, and display refresh rate controls. Like the home screen and these menus, the rest of the out-of-box OS installation is clean and loaded only with the main Google applications – there is no pre-installed carrier-related bloatware to speak of at all. 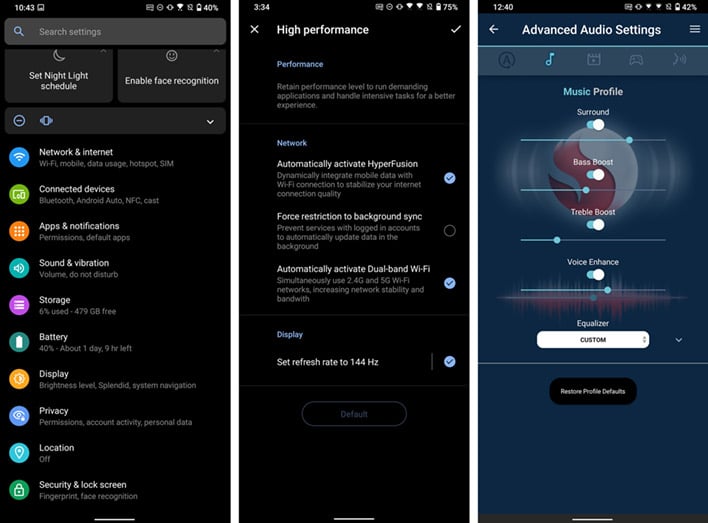 Google News feed is available if you swipe right from the home screen, and the usual set of gestures for navigation introduced a few generations back persist as well. Swipe up and hold from the very bottom of the screen and you’ll be presented with the app switcher. Quickly swipe up, and a group of shortcuts that dynamically changes based on usage appear, which lists the apps you’re most likely to run. Swipe up again and you’ll get the full app tray.

Volume adjustments pop out from the side, near the volume rocker, and the soft buttons at the bottom will also adapt based on the app that’s running or where you are in the OS. All of the settings menus and controls you’d expect from a flagship device are accessible in their expected location and there are some welcomed additions as well, like controls for the devices performance profile and the Advanced Audio Settings. In the Advanced Audio Settings, users can tweak the audio equalization for video, music, and games.
NEXT PAGE