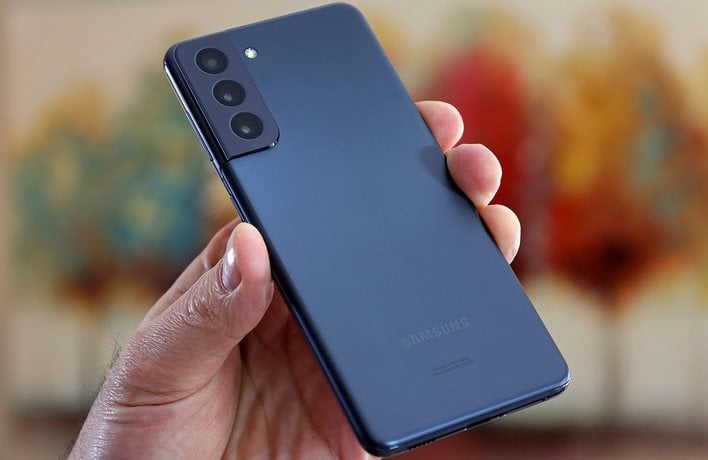 When Samsung first introduced its new Galaxy S21 5G line-up, the company took a similar good, better, best approach to its previous generation launch. Like the Galaxy S20, the new Galaxy S21 lineup consists of a base device, a mid-tier device and a top-end model, though all of them can be considered "flagship" phones among Samsung's large and varied handset product offerings. However, for the Galaxy S21 launch, it was clear that Samsung was more focused on value at all tiers this time around, with pricing starting at $799 and topping out $1199 for the Galaxy S21 Ultra, representing a $200 price cut across the board versus its previous generation Galaxy S20 family. What's even more exciting perhaps, for some of you, is that all three devices are on sale with solid discounts at Amazon currently, bringing the Galaxy S21 5G that we're evaluating here today, down to an even crisper $699 price point for the base 128GB storage model we tested.

Which brings us to the new Samsung Galaxy S21 5G -- the standard, non-plus, non-ultra model. As the lowest cost option of Samsung's new flagship trio, the Galaxy S21 5G has a few of its features scaled back, like its smaller 6.2-inch display and less capacious 4000 mAh battery. That said, Samsung still packs in a wealth of leading-edge technologies, like wireless charging and full support for both Sub-6 and mmWave 5G connectivity. In fact, there's a solid case to be made here for the features and functionality offered by the Galaxy S21, which you might not find in phones that drop into this same price band (currently just $699 on sale). So, let's explore those features, performance and more on the pages ahead... 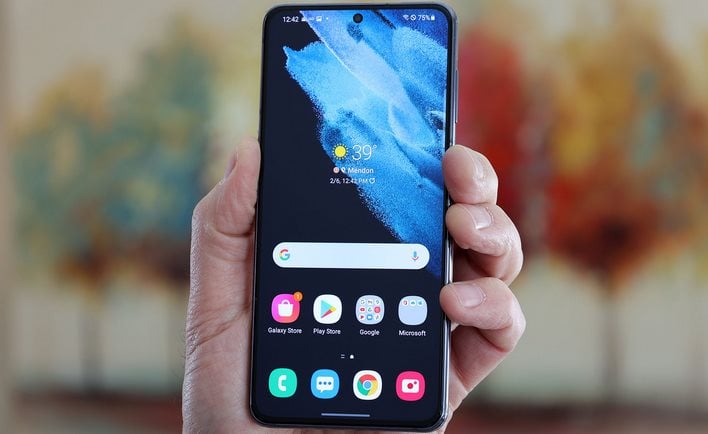 The first thing to consider is that Samsung's entire Galaxy S21 line-up is powered by Qualcomm's Snapdragon 888 5G Mobile Platform with its integrated Snapdragon X60 5G modem. QCOM's Snapdragon 888 is supposed to deliver a 25% uplift in CPU performance, coupled with a 35% lift in GPU performance for graphics and gaming. Backing that up is a healthy 8GB of RAM and 128GB or 256GB internal storage, though no microSD card storage expansion is available in any of Samsung's Galaxy S21 series devices.

Beyond these platform engines, the Galaxy S21 5G model we're testing has a punchy but compact 6.2" 120Hz capable AMOLED display, a 4000 mAh battery and all the cuttting-edge connectivity options offered by the Qualcomm platform, including both Sub-6 and mmWave 5G connectivity, as well as WiFi-6 and Bluetooth 5.0. What's not available in the standard Galaxy S21 is UWB (Ultra-Wide Band) support, though mainstream users shopping in this price range probably won't miss it, unless you feel compelled by Samsung's Galaxy SmartTag tracker technology that is poised to challenge Tile and Apple AirTags. In terms of its camera subsystem, we have a very similar setup to the previous-gen Samsung Galaxy S20, which we'll get to shortly.

However, perhaps the most standout features, for a phone in this price range, are the Galaxy S21's mmWave 5G connectivity and wireless charging. The former is in-part enabled by Qualcomm's integration of its Snapdragon X60 modem on board the Snapdragon 888 SoC, though Samsung did have to equip the device with the antenna and RF front-end technology to take advantage of it. Both of these features add significant cost, though the Galaxy S21 remains competitively priced.

The physical, industrial design of the Galaxy S21 is, like its higher-end brethren, sleek and refined. The camera bump on the back is less bulky with a chamfered edge that looks nice and cuts a much cleaner aesthetic on the backside of the device. The volume rocker and power/screen lock buttons again reside on the right edge of the device, with its SIM tray on the bottom, along with its USB-C port and a single down-firing speaker that accompanies the top earpiece speaker for stereo sound. The Galaxy S21's sound output can get surprisingly loud and full, actually, though it lacks some low-end as you might expect for a smartphone. Regardless, we were pleasantly surprised with this phone's acoustic performance.

As you can see in the top hero shot on this page, the rear of this Galaxy S21 has a nice matte black finish that resists fingerprints almost completely. And though the Galaxy 21 5G (standard) has a plastic composite backing, it still feels premium in the hand with its soft touch finish and polished metal side edging that mates with perfect tight tolerances to its now completely flat display, sans waterfall.


Speaking of which, the other sometimes overlooked key differentiator of the new Galaxy S21 series is Samsung's excellent Dynamic AMOLED display technology, which now scales up to 120Hz on demand, with a 48 to 120Hz adaptive refresh rate. The result is silky smooth transitions and scene rendering, to go with the inky, deep saturation and the crisp contrast we've come to expect and love with Samsung mobile displays. The Galaxy S21's 6.2-inch, 2400X1800 resolution display simply impresses and delivers equally well in outdoor daylight settings as well.

There's also Qualcomm's second generation 3D Sonic fingerprint sensor under the Galaxy S21's glass, which is claimed to be 77% larger and 50% faster for quicker, easier access to the device. In practice, it felt about the same in terms of speed, though perhaps a bit more forgiving on finger placement. 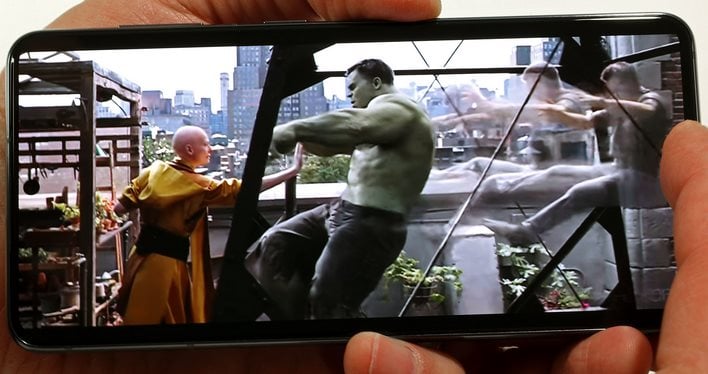 Cinematically, the Galaxy S21's display delivers the same great pop and fast pixel response times, rendering HDR, high resolution video content beautifully. Samsung also equipped the display with what it calls Eye Comfort Shield, which auto adjusts blue light emissions to reduce eye fatigue based on your usage patterns. The Adaptive mode of this feature will filter less blue light during the day and roll off more of it during evening hours, to respect your circadian rhythm. In practice, this feature works well enough and we imagine users will get used to the slightly warmer hue at times. However, we think pixel purists like us will tend to disable it all together during the day to maintain truer white balance, or set the usual custom time schedule to enable low blue light viewing only late at night. 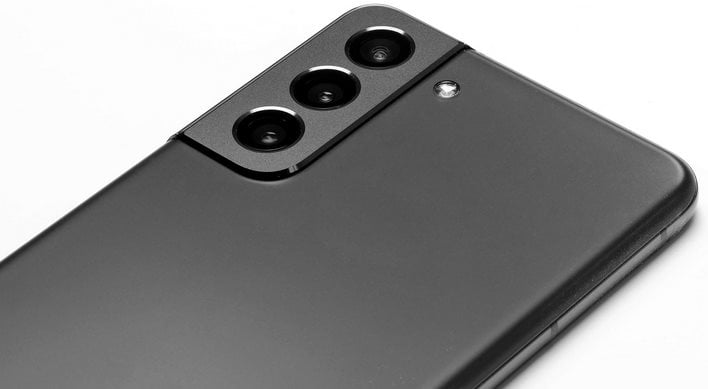 As we noted earlier, the camera setup of the Galaxy S21 is similar to the previous generation Galaxy S20 series, but with some enhanced computational photography processing techniques that have improved capture and render a bit, as well as bring a few innovative new features. Regardless, Samsung's primary rear 12MP f1.8 shooter with Dual Pixel autofocus and OIS can deliver some impressive results. 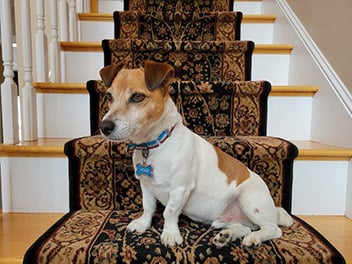 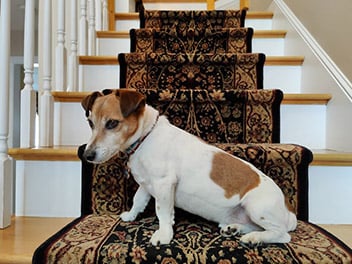 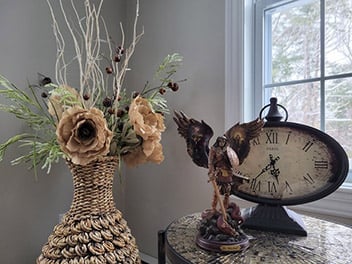 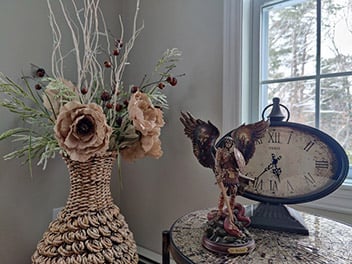 On the software and user experience front, Samsung has been refining its One UI experience, which is now at version 3.1. With the Galaxy S21, One UI offers a clean, well appointed skin that incorporates the appropriate hooks and enhancements for the Galaxy S21's unique features. Especially when it comes to camera features and performance, and image optimization in Samsung's Gallery app, if you're inclined to use it over Google Photos, One UI delivers.

Also, the Google Discover search bar is now present on the home screen, which is a welcomed addition. On the downside, we're not sure why Samsung insists on mapping its power and screen lock button to Bixby, requiring users to pull down from the top Android settings menu in order to power off or reset the phone. Quite simply, it breaks convention and can be an annoyance as, in order to power up the phone, you have to long-press this same button that is otherwise locked down to Bixby. We get Samsung's drive for Bixby adoption, and you can remap the button to power cycle if you like, but out of the box, this will leave new users confused. 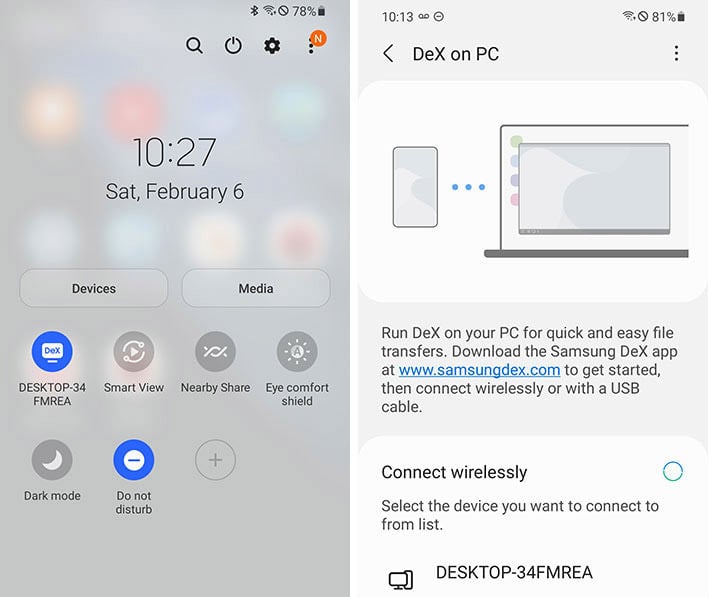 Another welcomed return, however is Samsung DeX, which has gotten even more refined now with the ability to wirelessly connect to Windows PCs over Bluetooth in concert with Wi-Fi, as long as both devices reside on the same network. Beyond traditional DeX uses cases for using your the phone to drive business productivity tasks like presentations, turning the phone essentially into a PC, this new functionality helps dramatically improve access to and integration of the Galaxy S21 for Windows PC users.

Wireless Samsung DeX PC integration allows you to drive the phone with your keyboard and mouse, in a window on your desktop with simple Chrome-like interface that supports drag and drop of files and more. You can also drive apps on the Galaxy S21 from your Windows desktop, including the phone dialer, though you'll have to pick up the handset or hit speaker since it will be the device hosting the call. Also, in addition to Microsoft OneDrive integration for automatic cloud backup and sync, Samsung brings its usual tight coupling to Microsoft Office suite apps for what is likely one of the best-equipped Android phone solutions for enterprise customers. We have to hand it to Samsung here -- DeX, OneDrive and Microsoft's Office pre-installed with tightly coupled functionality, are great tools for business users.

Alrighty then, there was obviously a lot of ground to cover feature-wise. Let's look at system performance, next...
NEXT PAGE