We used the OnePlus Nord N10 5G on T-Mobile, AT&T, and Verizon’s 4G LTE networks in San Francisco without any problems. Calls quality and data speeds were fine. Obviously, this is a sub-6GHz 5G phone, but our European review unit only lists one US-compatible 5G band, and that’s band n41 (2.5GHz) for T-Mobile, which isn’t deployed in the Bay Area. We don’t have 5G specs for the US model yet, so stay tuned. 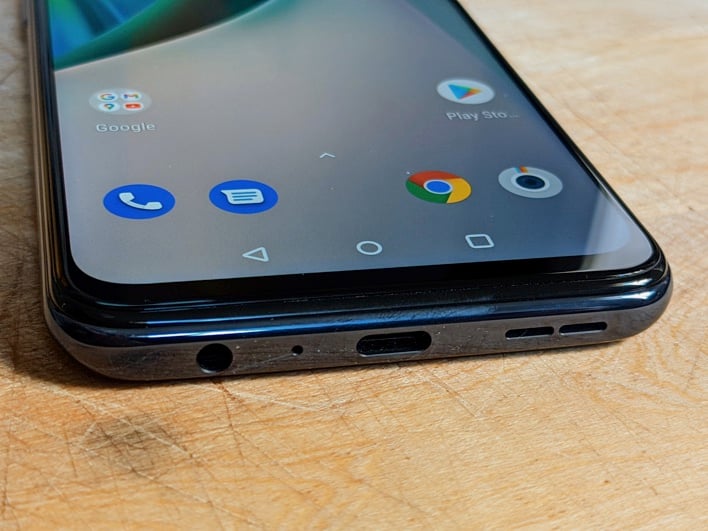 The N10 5G packs stereo speakers and a headphone jack with Dirac audio enhancement. It also supports aptX HD and LDAC for lossless audio over Bluetooth. While the stereo speakers are a big improvement over the Nord’s basic mono setup, it’s the headphone jack that surprised us the most. The DAC sounds great, and the amp delivers enough power to drive a wide variety of headphones and earbuds.

Performance has always been one of OnePlus’ strengths, and the original Nord proved that with proper optimizations, the Snapdragon 765G can feel just as quick as the Snapdragon 865 in day-to-day use. The OnePlus Nord N10 5G features a Snapdragon 690 SoC with built-in 5G, 6GB of LPDDR4x RAM and 128GB of UFS 2.1 storage (plus microSD support up to 512GB). And honestly, it’s kind of a mixed bag.

While the Snapdragon 690 fares rather well in our benchmarks (see below), the N10 5G just doesn’t deliver the kind of performance you’d expect from a OnePlus handset. Basically, it’s just competently fast, not impressively fast like previous OnePlus handsets we've tested. Despite the 90Hz display keeping everything smooth, the N10 5G lacks that amazingly quick and responsive OnePlus experience we’ve all come to love.

That being said, the N10 5G juggled our usual collection of benchmark apps without hiccups. We didn’t experience much in the way of latency or performance issues. Hard-core gamers aside, we think most people will find this phone snappy enough. 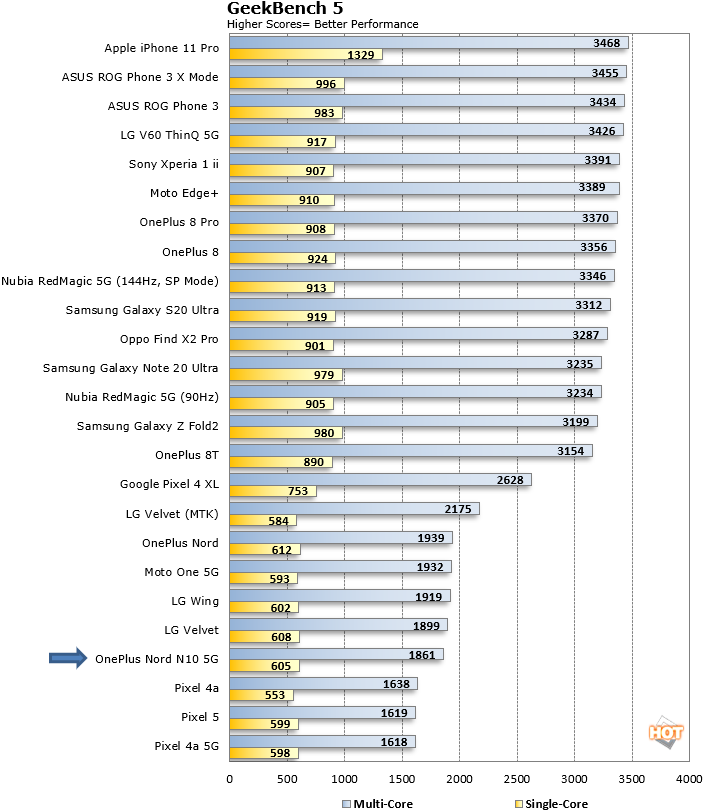 In these Geekbench 5 tests, the Nord N10 5G finishes in the middle of the pack. The iPhone 11 Pro still has the strongest single-core performance overall, but despite using a Snapdragon 690, the Nord N10 5G manages to hang with Snapdragon 765G-equipped devices like the original Nord and LG Velvet,

Futuremark's PCMark for Android is an excellent suite of tests if you want to benchmark a wide range of tasks on any handset -- things like image and video editing, as well as lighter-duty, everyday workloads such as email and web browsing. When you see the test running live, it's clear the scripted application tests are carefully selected and tuned to make use of the each mobile platform in a very controlled way. 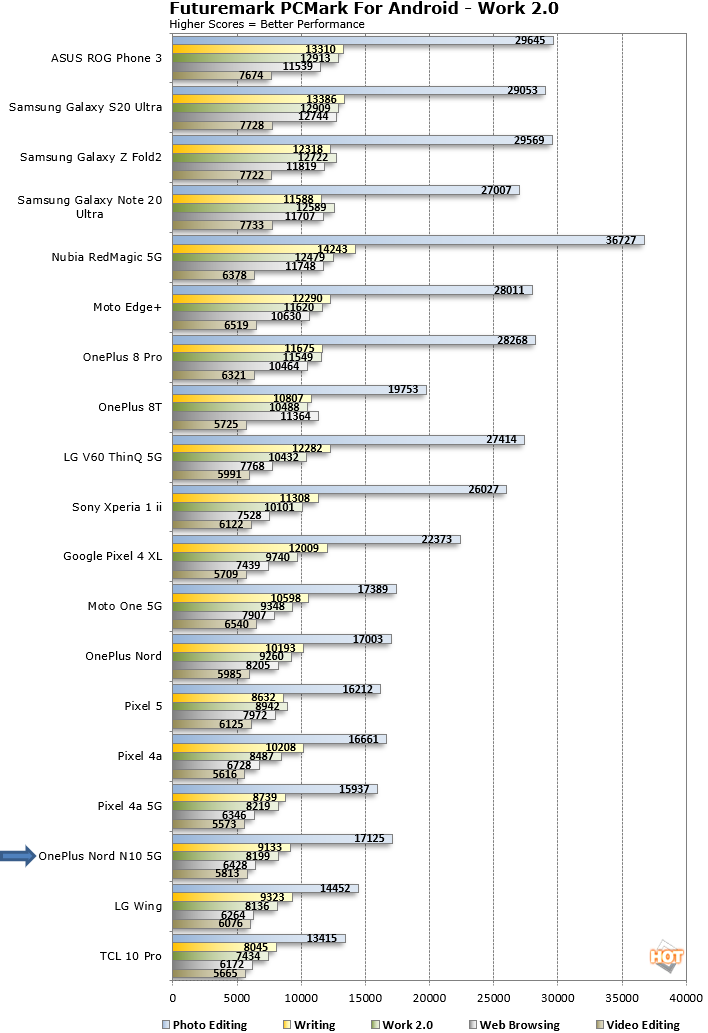 In PCMark, the Nord N10 5G also slots between the Snapdragon 730G-equipped Pixel 4a and Snapdragon 765G-equipped LG Velvet. While the Snapdragon 690 powering the Nord N10 5G clearly doesn't match the performance of current flagships for the workloads used in PCMark for Android, these results are still respectable.
AnTuTu’s latest benchmark returns a number of metrics ranked with somewhat nebulous scores, rather than frame rates or time to complete. Here we're running the latest version of AnTuTu across an multiple Android devices. AnTuTu returns four top level performance results which are all included here: CPU, RAM, 3D, UX (or User Experience), along with a total score... 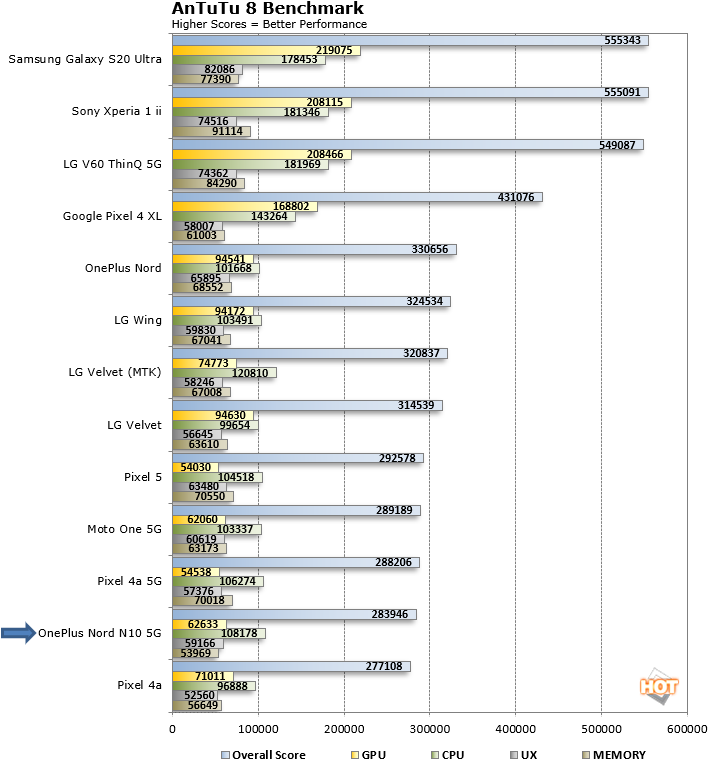 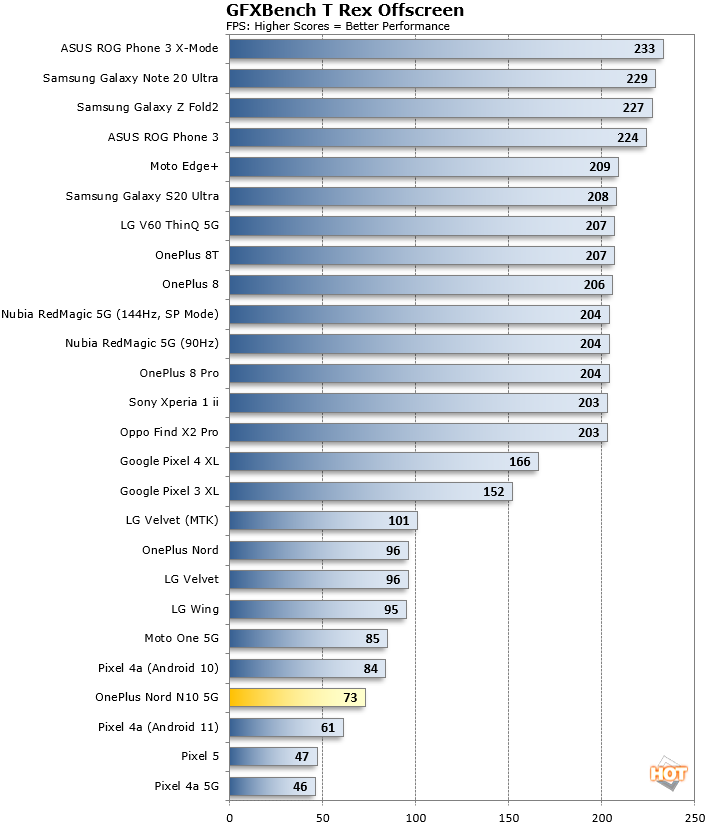 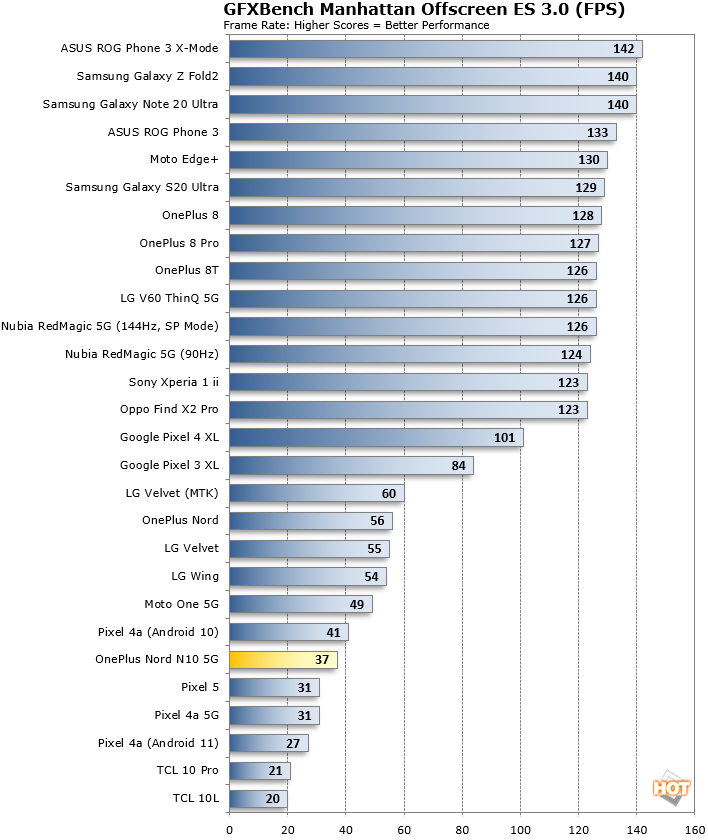 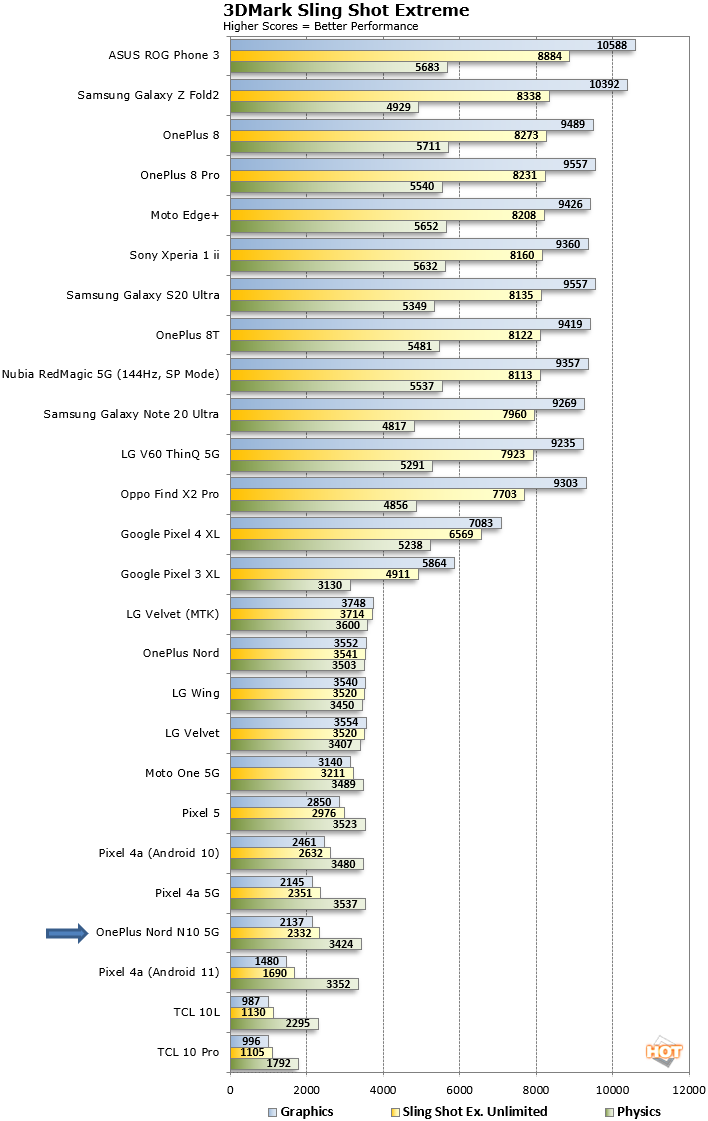 The rest of the N10 5G’s specs are pretty standard, and include CAT 18 LTE, WiFi 5 (802.11ac), Bluetooth 5.1 (LE), NFC, and dual-band A-GPS / GLONASS / Galileo / Beidou, plus the normal sensor suite (accelerometer, compass, gyroscope, ambient light, proximity, and barometer). While the capacitive fingerprint scanner is quick and reliable, the vibration motor is a step down from previous OnePlus handsets. 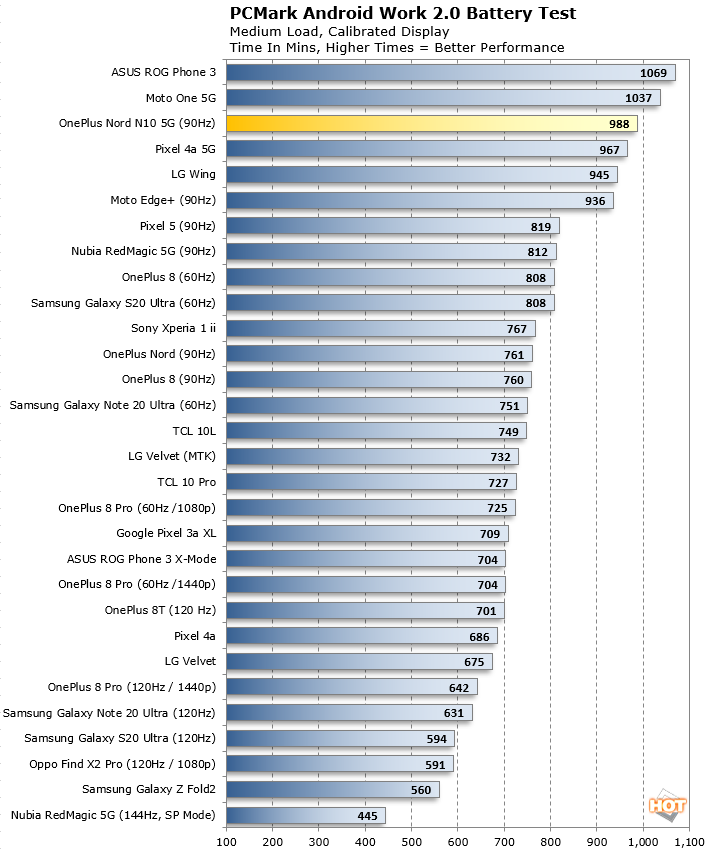 In terms of battery life, the N10 5G really surprised us. Our PCMark test ran for a whopping 16 hours and 28 minutes. That’s just phenomenal, especially for a 4300mAh cell. We’re basically looking at two days’ use on a charge. Clearly, the Snapdragon 690 sips power. Topping off is a breeze thanks to 30W fast charging (Warp Charge 30T) -- with a charger supplied in the box. Obviously, there’s no wireless charging.

Next up: the software, pricing and our review verdict...