Now, Qualcomm is looking to go further down-market to bring 5G connectivity to the masses with the Snapdragon 690 SoC. This isn't just a case of Qualcomm slapping a 5G modem onboard and calling it a day; the company has made some significant changes compared to other 600-Series chips that makes it stand out. For starters, it still features a big.LITTLE configuration with two high-performance cores and six efficiency cores. But in this case, the Snapdragon 690 is rocking two Kryo 560 cores (Cortex-A77) operating at 2GHz and six Kryo 560 cores (Cortex-A55) operating at 1.7GHz. 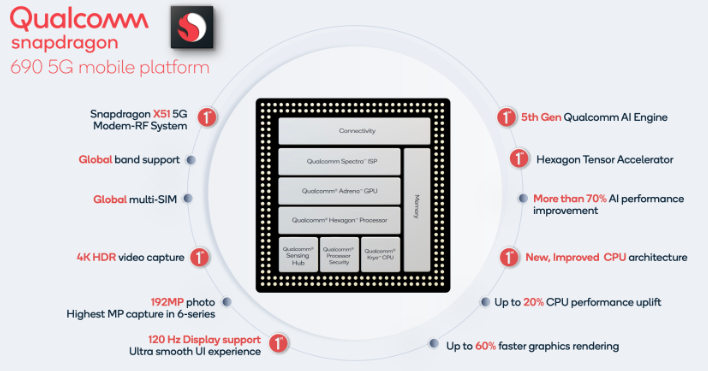 We're also looking at a higher-performing Adreno 619L GPU, which takes the place of the Adreno 612 and Adreno 615 GPUs that we've seen in its predecessors. As for memory, the new Snapdragon 690 supports LPDDR4X operating at up to 1866MHz, offering 14.9GB/sec bandwidth.

But perhaps the most important aspect of the Snapdragon 690 is its integrated 5G modem: the Snapdragon X51. As you might have already surmised by its naming, it slots in under both the Snapdragon X55 and Snapdragon X52 when it comes to capabilities. It supports sub-6GHz 5G bands, with downlink/uplink speeds of 2.5Gbps and 1.2Gbps respectively. However, unlike Qualcomm's more premium 5G modems, there is no provision for mmWave support (which is no big loss at this early stage in 5G adoption). You do, however, get backwards compatibility with 4G LTE networks.

From the looks of things, the Snapdragon 690 should be an incredibly popular chipset for OEMs to integrate into their next-generation low-cost smartphones. We can likely expect to see products from the likes of Google, Samsung, LG, and Motorola (among others) adopting the chips as 5G networks began expanding around the globe and consumers become hyper-focused on the speed benefits.