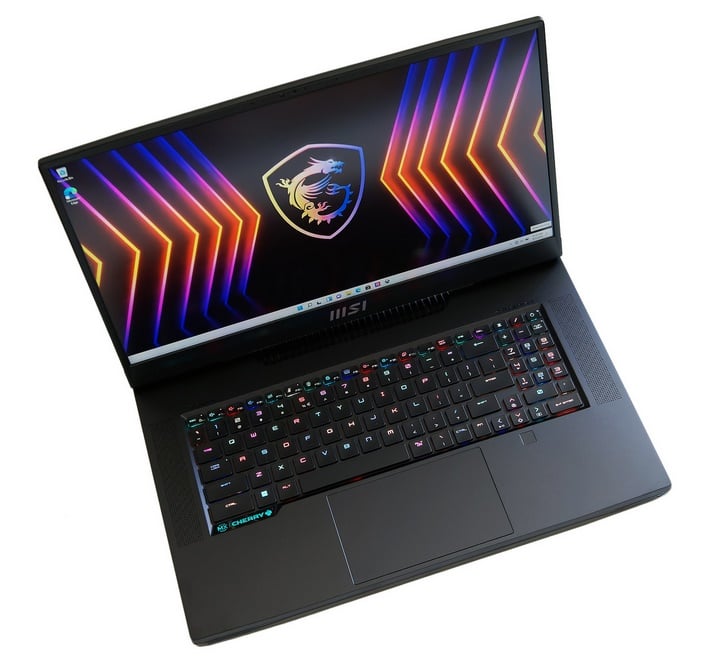 There has been a massive increase in the performance and efficiency of notebooks over the last few years. Intel, AMD, and NVIDIA have all been laser-focused on performance-per-watt with their respective processors for many generations, and the end result is that you can now purchase laptops and notebooks with processing and graphics horsepower that can rival all but the highest-end desktop systems. Case in point, the MSI GT77 Titan we’ll be showing you here today, which is the highest performing laptop we’ve ever tested.

MSI has been iterating on its top laptops and notebooks for quite a while, and the current generation is its best yet. We looked at a powerful GE76 Raider a few months ago and came away impressed, but the particular MSI GT77 Titan we were able to evaluate is absolute tour de force. The machine is packed with Intel’s and NVIDIA’s current flagship CPUs and GPUs, with tons of memory and fast storage as well. The display, keyboard, and chassis are top-shelf as well. Check out the specs below and then we’ll dig in a little deeper, in an effort to detail exactly how impressive this machine really is...

Although there is new hardware on the horizon – which will likely find its way into the GT77 Titan – at this point, there is no more powerful configuration available in a consumer laptop than a Core i9-12900HX processor and a GeForce RTX 3080 Ti GPU combo, and that’s exactly what we have in this version of MSI's GT77 Titan. The Core i9-12900HX features 16 total cores with support for 24 threads, comprised of 8 P-Cores (with HyperThreading), 8 E-Cores and 30MB of L3 cache. Those cores clock all the way up to a 5GHz maximum boost, which results in both high single and multi-threaded performance. 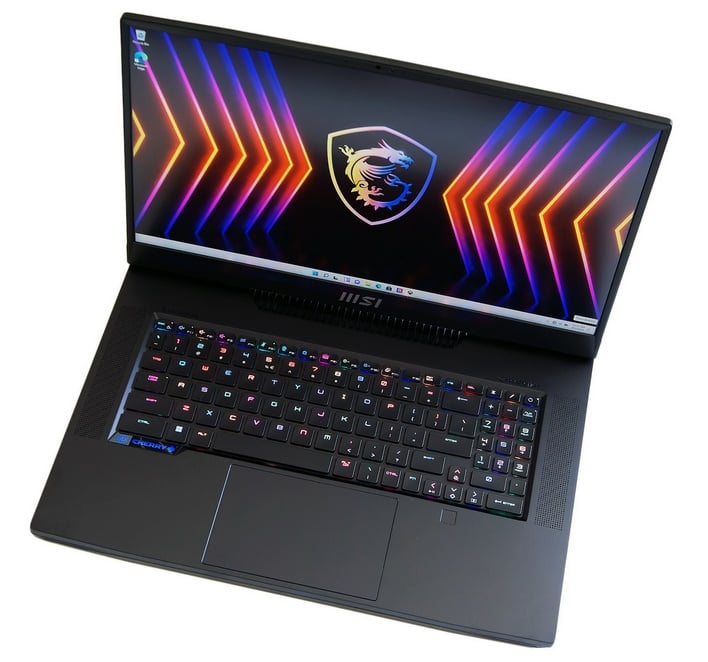 Further, the GeForce RTX 3080 Ti configuration in this machines includes 16 GB of GDDR6 memory operating at an effective data rate of 16Gbps, and has a full 175W TDP with a maximum boost clock of 1,395MHz. Despite sharing a name with the desktop version of the RTX 3080 Ti, however, the mobile version is scaled back in a few ways. For example, it has a 256-bit memory interface rather than the 320-bit interface of the desktop variant, and has 7,424 CUDA cores rather than the 10,240 of its desktop counterpart. However, as we've previously shown, these high-end mobile Ampere GPUs offer plenty of performance for today's AAA titles.

Our GT77 Titan also features a jaw-dropping memory configuration. The system we tested features a pair of 32GB DDR5-4800 SO-DIMMs, totaling 64GB of memory. 64GB should be more than enough to handle just about any consumer or professional mobile workload, including taxing content creation tasks. Because the memory is comprised of standard SO-DIMM though, it can be replaced or upgraded later on if the need arises; the GT77 Titan actually has four memory slots and supports up to 128GB. The same is true of the triple 1TB PCI-Express 4.0 NVMe solid state drive installed in the GT77 Titan. They're all standard M.2 2280 gumsticks, which makes installing upgrades or replacements a piece of cake.

Networking and wireless connectivity is handled by a combination of Killer's AX1675i 802.11ax Wi-Fi controller and a Killer E3100G 2.5 Gigabit Ethernet controller. The AX1675i has a 2x2 MIMO configuration, so getting top performance from today's latest routers should be no problem. There's also Bluetooth 5.2 support aboard. While the E3100G is theoretically much faster than the Wi-Fi, most people do not have multi-Gig Ethernet switches to take full advantage of it, but that’s slowly changing as more and more switch and router manufactures incorporate multi-gig ports into more affordable products.

The MSI GT77 Titan's chassis is built from a combination of aluminum and polycarbonate, except for the lid which is made of machined aluminum. The lid has a single MSI Dragon logo embedded at the top center, and due to the gaming / enthusiast target audience of this machine, that logo also features integrated RGB lighting for a bit of bling. The polycarbonate body has a premium, soft-touch feel to it, although it does pick up fingerprints fairly easily, so you’ll want to keep the microfiber cloth included with the system handy. There's minimal flex to the lid and perimeter of the chassis, the overall build feels solid, and the materials all work well together.

Although it's nothing like the massive, boxy cinder-block gaming notebooks of yesteryear, the MSI GT77 Titan is a rather large machine. Its sizable footprint is a result of the 17.3" display and decision to mount the hinges on top of the machine rather than the back. On the plus side, this design makes room for additional venting on the rear and leaves plenty of room on the sides for ports. For a desktop replacement notebook, having plenty of connectivity is important, so we are good with this design decision. The hinges are sturdy and the display stays in place at any angle. There's a fair amount of resistance, but the display swings open smoothly and can be opened with one hand. At 7.2 pounds, this machine also stays put without sliding around when opening one-handed, but you'll certainly feel it if you're going to be carrying the machine around all day.

The 1080p display on the MSI GT77 Titan we tested is ideal for gaming, but higher resolution options are also available. Our machine had a 17-inch panel with a Full HD 1080p resolution and ultra-fast 360Hz refresh rate. While the 1080p resolution might be a little low by today’s standards, especially considering the RTX 3080 Ti in this beast, the display is large enough that Windows doesn't need to scale any elements at all, so users can enjoy all of that resolution without any window scaling issues which Microsoft can’t seem to get right yet (although the situation gets better with every update). 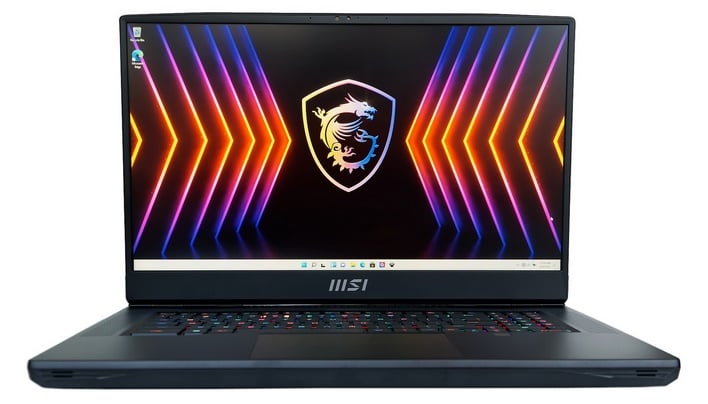 If this display has an Achilles’ heal, it is its 200 nits of maximum brightness. That brightness level is fine in most indoor scenarios, but won't do particularly well in direct sunlight. That's most likely not a concern with a machine like the GT77 Titan though, and in our brightly-lit office, we did not have to max out the brightness on the display to enjoy it. In terms of color accuracy, contrast, uniformity and viewing angles, there's nothing to complain about. The panel in this machine works very well.

Just above the display panel is somewhat disappointing 720p IR webcam with Windows Hello support. It’s perfectly adequate, but with the ubiquity of video conferences nowadays, we would like to see high-quality 1080p webcams become the norm.

On the audio front, MSI outfits the GT77 Titan a quad-speaker design tuned by Dynadio, featuring dual down-firing woofers. They're not going to compete with any standalone speaker setups, but the layout and tuning sound exceptionally good for a laptop and are clearly a notch above most other systems of this type. Bass, while prevalent, won't shake the walls, but mids are good and the highs are crisp. The speakers in this machine are perfect for teleconferencing or media consumption, but hardcore gamers will still probably want a headset or external speaker setup. 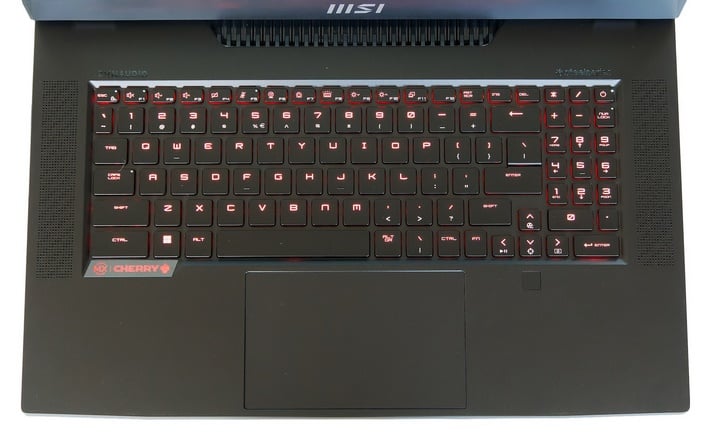 The keyboard in the MSI GT77 Titan is designed and built by Steel Series and it feature real Cherry mechanical key switches. The GT77 Titan's keyboard is phenomenal, and because of the machine's size, there is also a discrete number pad available. About the only complaint is a bit of flex in the deck when mashing away, but we doubt it’ll be an issue for most people. The keyboard also has per-key RGB lighting and all the lighting can be managed in the bundled Steelseries software. The trackpad is decently sized, but lacks discrete integrated buttons. It works well for productivity tasks and does a good job with palm rejection and gesture recognition, but gamers will still want to use dedicated mouse.

The left side of the machine is home to the rectangular power jack for the included 280 Watt AC adapter, two USB-A ports, the card reader slot, and the 3.5mm audio jack. And the right side houses another USB-A port, dual USB-C ports, the mini-DP and HDMI outputs, and the RJ45 port. There’s also venting on both sides (and along the back and bottom).

The venting on the sides of the GT77 Titan will exhaust hot air directly onto hands that might be positioned nearby when using an external mouse, regardless of being a lefty or a righty, but most of the warm air exhaust exits through the rear or towards the back of the machine, so it was never a problem for us.

Our MSI GT77 Titan shipped with Windows 11 Pro, with the 21H2 update preinstalled. There's no bloatware to speak of, save for the ever-annoying Norton Security suite, and the only utilities that were included out of the box were the MSI Center software mentioned previously, and a couple of SteelSeries apps for controlling the keyboard lighting and audio equalization.
MSI Center can be used to monitor hardware health data and fan speeds, and it provides updating, recovery and support tools as well. 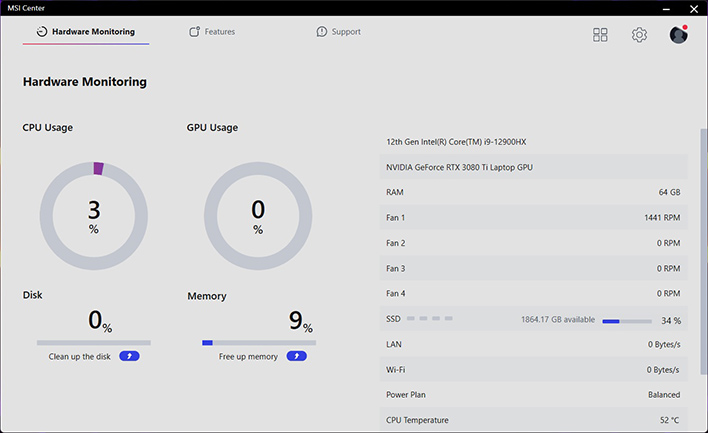 The MSI Center app also offers a host of optional plugins for things like image AI-assisted photo search and tagging, tuning audio, capturing in-game highlights, and switching color profiles for the display. The MSI True Color plug in will throw a notification upon every re-boot when a display profile is loaded, which might bug some users, but it's innocuous enough. All in all, MSI Center is a useful application with a straightforward interface, tons of options and minimal clutter, though it will initially nag you to set up a backup schedule for the machine.

It is also inside the MSI Center application that users can tweak the machine's performance profile. For example, this system can operate with a hybrid graphics configuration that leverages both the iGPU and discrete GeForce RTX 3080 Ti, or users can opt for a full-power discrete mode, that keeps the GeForce lit-up and engaged at all times. Hybrid mode will dynamically leverage the most appropriate GPU given a particular workload to balance efficiency and performance, but the discrete mode runs flat out at all times.

And with all of that out of the way, let's dive into some benchmarks...