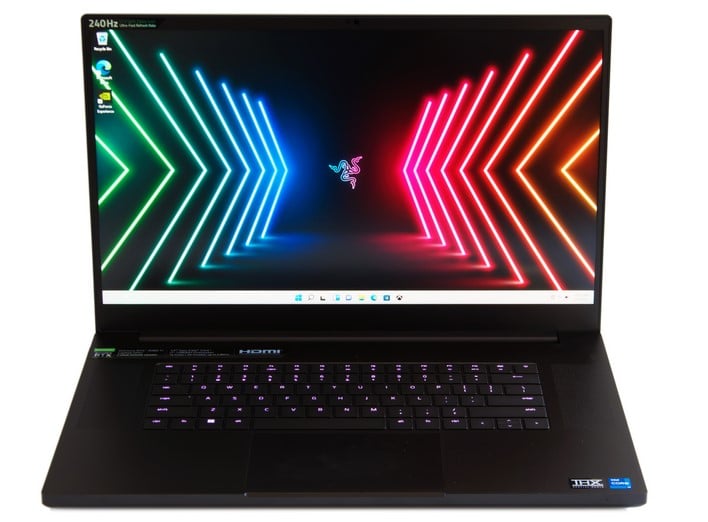 When NVIDIA’s GeForce RTX 3080 Ti mobile GPU and Intel’s beefy 12th Gen Core H-Series processors first hit the scene, they tore through the lab here guns a-blazin’. We had the chance to take a look at a couple of killer systems from MSI and Alienware at the time, which maxed-out the platform with both NVIDIA’s best mobile GPU and Intel’s top-end Core i9-12900HK. The newly-updated Razer Blade 17 for 2022 we’ll be showing you here, however, takes a somewhat different, more measured approach. Instead of packing the laptop with nothing but hero SKUs, which compete for every Watt of power and thermal capacity in a mobile form factor, the latest Razer Blade 17 is equipped with a Core i7-12800H (12900H also available), and a 165W GeForce RTX 3080 Ti configuration. Razer, however, upgraded the cooling in the system, highly optimized its power profile, and then Razer’s proprietary software works a little magic to squeeze some extra performance out of the system while gaming.

We’re getting ahead of ourselves, though. Before we get to the numbers, take a peek at the new for ’22 Razer Blade 17’s main features and specifications, then ogle the system for a bit to get a feel for its overall design. If you’re contemplating a premium, mobile gaming system like this, you’ll be probably be happy you did... 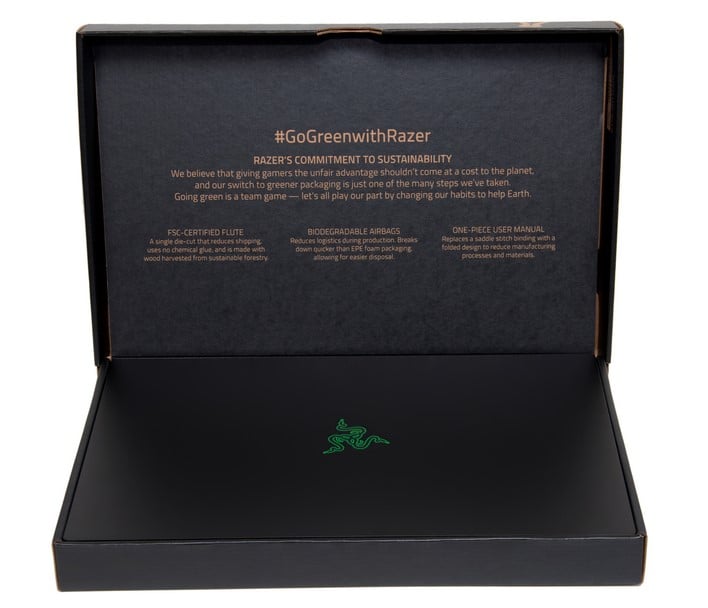 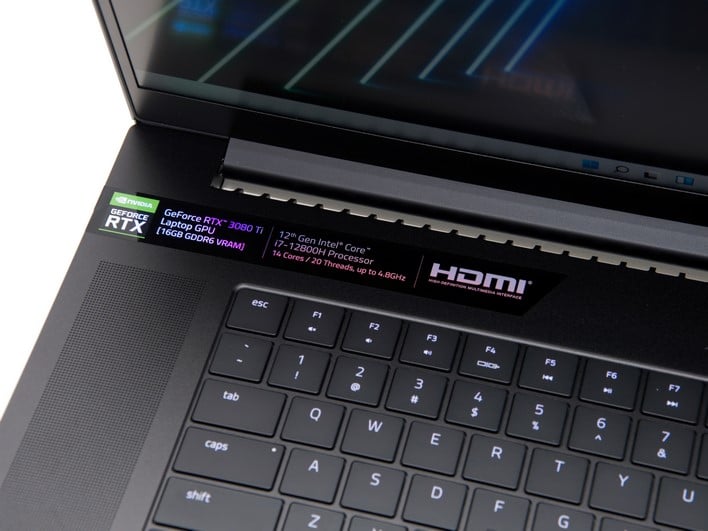 In terms of connectivity, everything you’d expect is also present. There’s an Intel Killer AX1690i Wi-Fi 6e wireless network and Bluetooth 5.2 controller, in addition to a 2.5G Realtek wired NIC. And since this system is based on Intel’s latest 12th gen platform, all of the IO goodness you’d expect is also here, including Thunderbolt 4 and USB- 3.2 Gen 2.

This iteration of the Razer Blade 17 looks virtually identical to its predecessors. Despite its high-performance, gaming roots, the system has an understated aesthetic, with the green, lighted Razer logo in the lid and perhaps the green USB-A ports the only external hint that this machine is something special. The machine has a matte-black anodized finish all around on its aluminum body, that does an OK job resisting fingerprints (nothing holds up perfectly to these Italian meat hooks), with no visible venting anywhere except for the bottom of the system. When resting on a table, the Razer Blade 17 is really nothing but sharp lines all around.

In addition to looking good, the aluminum unibody construction on the system also feels great. The Razer Blade 17 is rigid and exudes a premium feel throughout. The entire chassis measures 0.78" x 10.24" x 15.55 and weighs in at just over 6lbs. This ain’t no XPS 13 or X1 Carbon, but the Razer Blade 17 isn’t particularly massive for a powerful gaming notebook either. 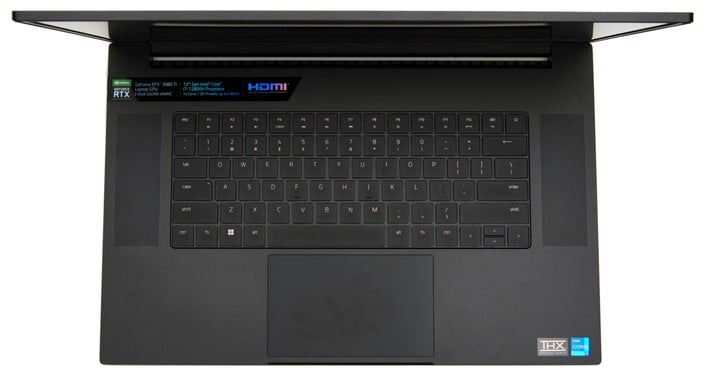 Except for the per-key RBG backlighting, opening the lid doesn’t reveal anything garish or over the top like some other gaming notebooks. The keyboard deck is home to a good-sized keyboard, which is flanked by large speaker grilles on both sides and a large, precision glass touchpad beneath. We found the keyboard to be surprisingly nice to type on and the touch pad is excellent – it does a great job with palm rejection and gesture input. The only niggles we have are that you really have to be precise and glide way to the right side to right-click anything and the angular, beveled edge at the front has some sharp corners. Tracking and tactile feedback with the touchpad are great, though. 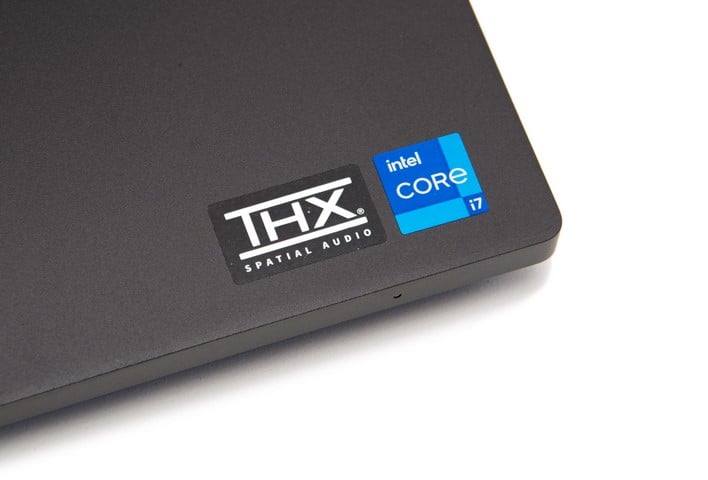 Underneath those speaker grilles (and some additional ones on the bottom), lurk what is probably the best integrated laptop audio we’ve heard. This system is packing 8-speakers -- 4 tweeters and 4 subwoofers – with support for THX Spatial Audio, which also works when using headphones. The integrated speaker system isn’t going to shake a room, but it outputs high-volume, distortion free audio that sounds surprisingly good for a laptop. Continuing on the audio front, there’s also a pair a microphones built-in, which complement the built-in 1080p webcam. There’s also a Windows Hello compliant IR camera present. 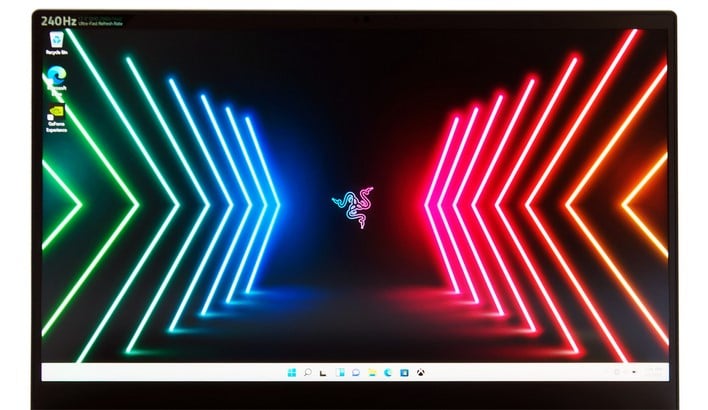 That webcam sits above one of the real stars of the show. There are multiple display options available from Razer, including an even higher-refresh rate 1080p panel or a super-tight 144Hz 4K panel. This configuration we have here truly hits the sweet spot in our opinion, though. Our system is outfitted with a 17.3" QHD (2560x1440) 240Hz, G-Sync-compatible display, with 100% DCI-P3 gamut coverage. There are relatively small 6mm bezels on sides and each panel individually factory calibrated. For this 17”-class of gaming notebook, the resolution and refresh rate are a perfect fit, and image quality is top notch. Uniformity, saturation, contrast, and viewing angles are great, and that 240Hz refresh rate results in smooth, buttery animations both on the desktop and while gaming. G-Sync support means your games render smoother and tear-free as well. 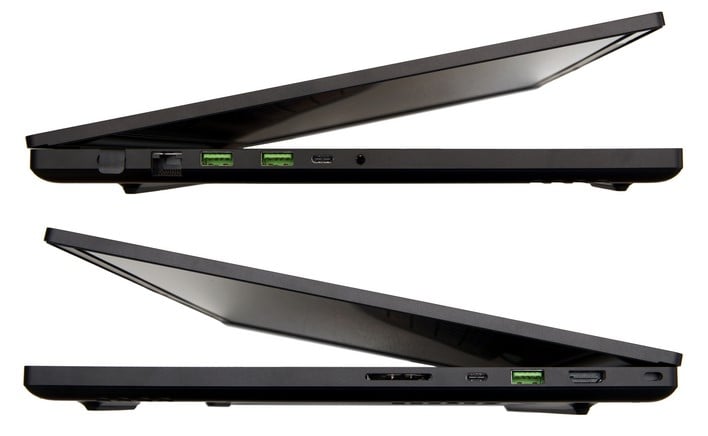 Ports on the machine include (left) a proprietary power port, a RJ45 LAN jack, dual USB-A ports, a USB-C Thunderbolt port, and a 3.5mm audio jack, along with (right) a UHS-II SD Card reader, another USB-C Thunderbolt port, a USB-A port, a full-sized HDMI 2.1 port, and lock port. Users won’t be wanting for IO on this system, and there’s also no need for dongles or a separate card reader when on the road, which is another plus. 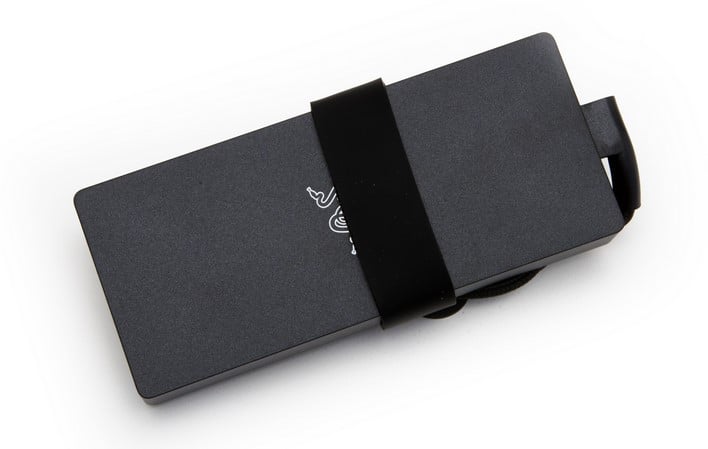 Powering all of this is an 82whr battery. It's not the largest we’ve seen in a gaming notebook (the MSI GE76 Raider has a 99.9whr battery), but it’s beefy enough, especially considering battery life isn’t a top priority on high-power gaming notebooks. To charge that battery and power the Blade, Razer includes a 280 watt power brick. The company employs GaN technology in the brick though, so it is not excessively large or heavy.

On the hardware front, the Razer Blade 17 is the total package. But the company incorporates some extra software mojo. Thankfully, the OS image wasn’t loaded with excess bloat or nagware. The only real notable is the company’s Razer Synapse software. 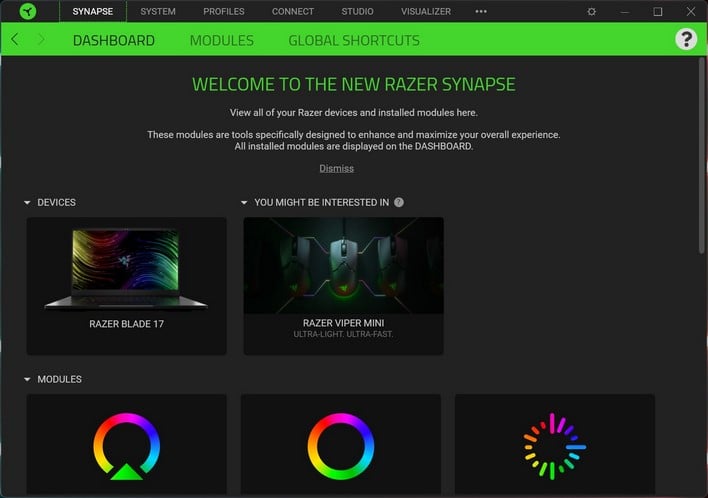 Razer Synapse is where users can configure the customizable lighting in the system, tweak the performance profiles, link social media accounts, and access a number of studio features for streaming and capturing game footage, among a number of other things. Performance profiles while plugged in and on battery can be customized, but Balanced and Silent presets are available out of the box. 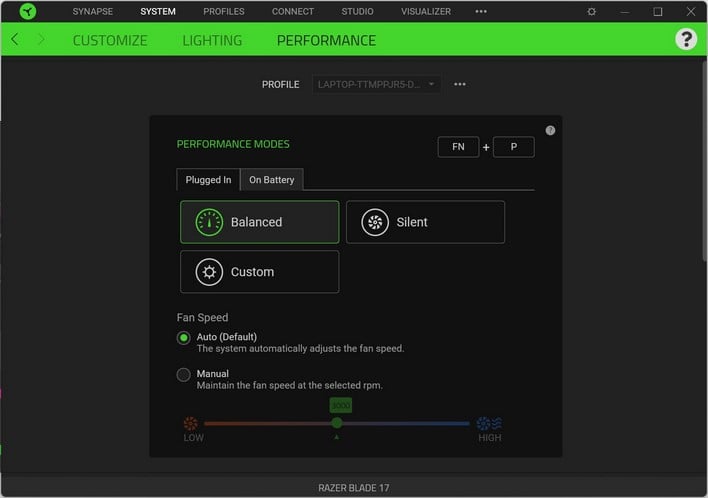 Razer Synapse has an additional trick up its sleeve, however. The app is always running in the system tray, and when you launch a game, it will automatically pause or shut-down unnecessary background tasks to ensure the maximum amount of RAM and CPU resources are available for your games. Normally, we’re not too high on apps like this messing with a system, but we didn’t encounter any weirdness on the Blade and as you’ll see shortly, game performance is top-notch...