During their Computex 2021 keynote, NVIDIA’s Jeff Fisher, GeForce Senior Vice President, and Manuvir Das, Head of Enterprise Computing, unveiled a number of new enterprise and consumer products, targeting multiple market segments. For all of the gamers though, it was Jeff Fisher’s official unveiling of the oft-rumored GeForce RTX 3080 Ti and RTX 3070 Ti cards that most likely got your juices flowing. The new GeForce RTX 3080 Ti is the spiritual successor to the previous-gen flagship RTX 2080 Ti, while the GeForce RTX 3070 Ti builds upon the popular RTX 3070 with much faster memory and some goosed specifications that should boost performance quite a bit.

We’re about a week away from digging into the GeForce RTX 3070 Ti, but the new GeForce RTX 3080 Ti goes on sale tomorrow and we’re able to give you the full scoop right here, with cards from NVIDIA and EVGA. We’ve had an NVIDIA GeForce RTX 3080 Ti Founders Edition and EVGA GeForce RTX 3080 Ti XC3 Ultra on hand for a few days now and have put them through their paces, alongside an array of other cards. Since you’re probably itching to see which rumors were true and how they perform relative to the competition, let’s jump right in and get down to business... 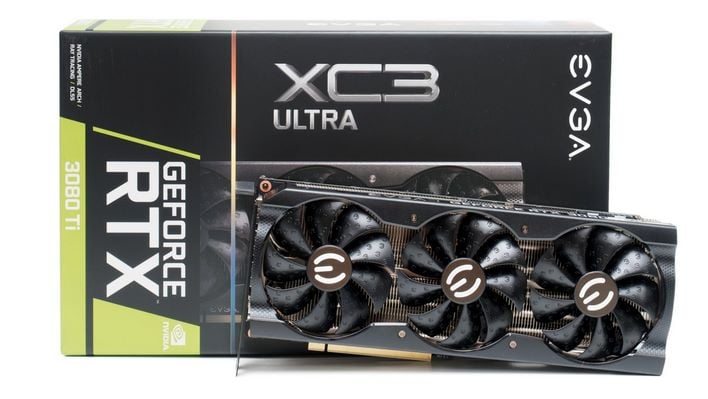 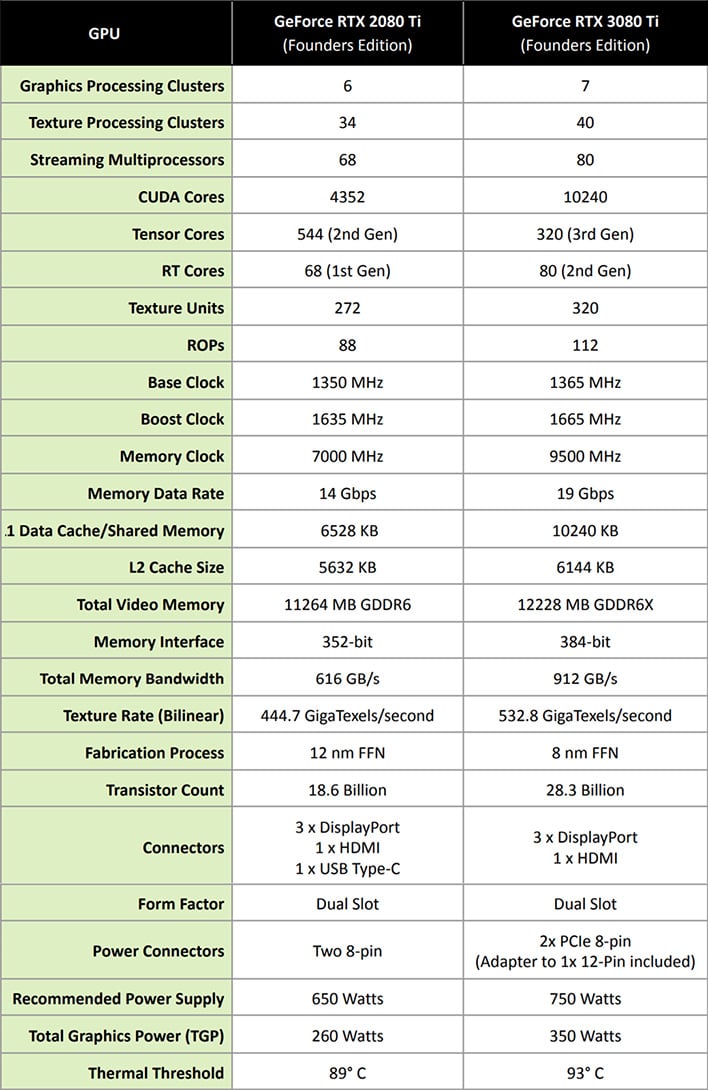 Before we get too far ahead of ourselves though, we suggest checking out a few previous articles to best understand what we’ll be covering here today. Because we’ve covered NVIDIA’s Ampere architecture in-depth previously, we won’t be rehashing things again in this article. Perusing our coverage of NVIDIA’s initial GeForce RTX 30 series announcement and the deeper dive on its new features and Ampere architecture would be ideal, because the new GeForce RTX 3080 Ti uses the same exact slice of silicon (the GA102) that powers the current GeForce RTX 3080 and RTX 3090 – it’s just configured differently.

Like the GeForce RTX 3080, the cooler on the GeForce RTX 3080 Ti Founder Edition features dual axial fans, and a split heatsink design. One end of the heatsink array sits directly atop a vapor chamber that is affixed to the GPU and memory. The fan above that section directs air through the heatsink and immediately funnels it out of the chassis through large vents in the case bracket. The heatsink on the back half of the card, however, which is linked to the front vapor chamber via heat-pipes, allows air from the second fan to pass all the way through the card, where it is rises to the top of the chassis and is eventually exhausted, assuming the system’s case has adequate ventilation. 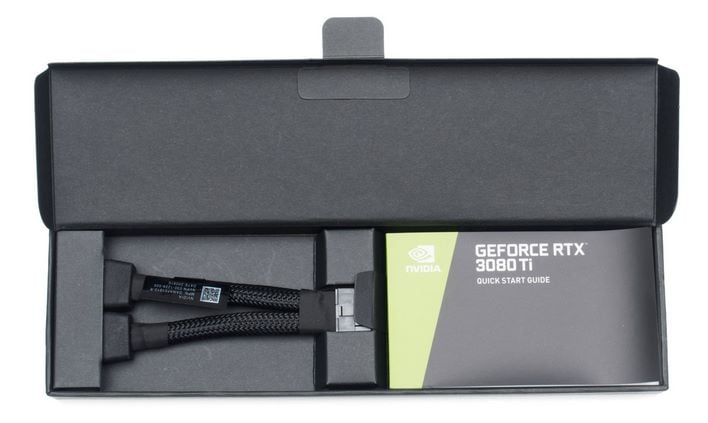 The push/pull, pass-through cooler works in conjunction with a denser PCB design that has a unique V-shaped rear edge. Like the GeForce RTX 3080, the new 3080 Ti also features a miniaturized 12-pin power connector, though most partner boards we have seen (like the EVGA card below) use the traditional PCIe connectors that are more common today. NVIDIA includes an adapter with the RTX 3080 Ti that converts a pair of 8-pin PCIe connectors to the new mini-12-pin design, and a number of PSU manufacturers offer modular cables with the new connector as well. 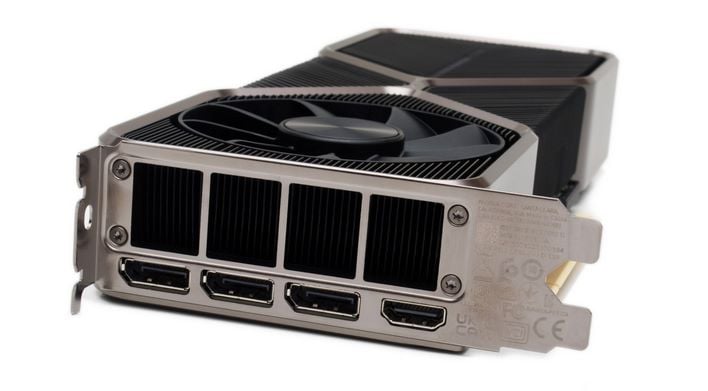 In terms of outputs, the GeForce RTX 3080 Ti has triple full-sized DisplayPorts and a single HDMI output, just like the other high-end RTX 30-series cards. We should note that its HDMI port is an HDMI 2.1-capable variant, which enables 4K120P with G-Sync on some of the latest OLED TVs and allows for 8K resolution over a single cable.

The EVGA GeForce RTX 3080 Ti XC3 Ultra has the same 12GB of GDDR6X and a similar memory clock to NVIDIA’s Founder Edition, but with a slightly higher boost clock (1,665MHz vs. 1,725MHz) and of course, some of EVGA’s distinctive flavor.

The EVGA GeForce RTX 3080 Ti XC3 Ultra’s design resembles many of EVGA’s current-generation cards. It has a similar design language to the company's other 30-series products, with an angular front fan shroud, and triple axial-fans with “E” logos scattered about all of the fan blades. This particular card is only 2 slots wide (not 2.5 slots) and features a densely-packed cooler, with an anodized aluminum heatsink assembly and copper heat pipes that extend over the GPU and back around atop the VRM. The heatsink assembly is actually longer than the PCB and effectively covers the entire front of the card. 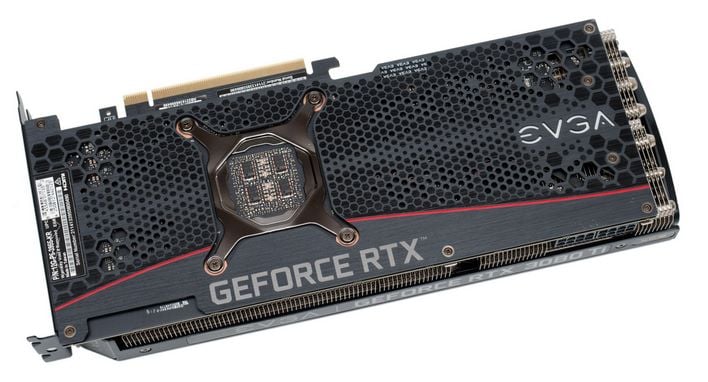 EVGA also outfits the XC3 Ultra with a stylized back-plate, with hexagonal ventilation cut outs. We should mention, that the backside of the PCB has some cut-outs as well, to allow air to completely pass-through the card (like NVIDIA's design) and the EVGA logos are lighted, with addressable RGB LEDs that can be tweaked via the company’s Precision X1 utility.

The EVGA GeForce RTX 3080 Ti XC3 Ultra requires a pair of traditional 8-pin PCI Express power connectors, and EVGA recommend a 750W PSU at minimum. In terms of display outputs, the GeForce 3080 Ti XC3 Ultra has triple full-sized DisplayPorts (1.4a) and a single HDMI 2.1 output, just like the Founders Edition.

With all of that out of the way, let’s get to some numbers...