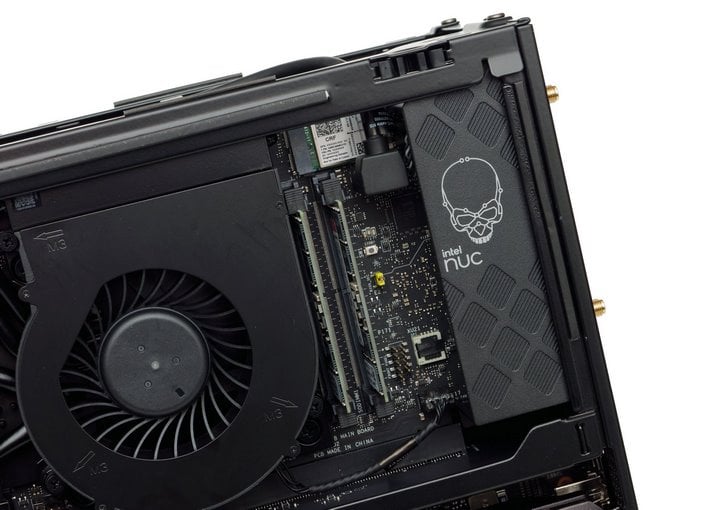 Intel has consistently updated and upgraded its series of NUC small form factor PC systems over the years. What started as a niche family of mainstream mini-PCs that featured mobile hardware and would fit in the palm of your hand, expanded and morphed into multiple families of mini PCs, which run the gamut from low-power compute sticks to high-performance gaming systems. In its 10th year of existence, Intel is expanding the NUC family yet again, with its most powerful system to date – by far – the NUC 13 Extreme.

We’ve looked at a number of previous-gen NUC Extreme systems. Each one was considerably larger than the original 4” square Next Units of Computing that spawned the category, but they remained much more compact and had significantly smaller footprints than anything DIYers could build with off-the-shelf components. The NUC 13 Extreme, however, features a redesigned Compute Element with a full-on desktop socket, along with a new slot backplane and chassis, that are all larger (and more capable) than previous-gen products. In fact, the NUC 13 Extreme is designed to accommodate graphics cards that are 3-slots wide and up to 12 inches in length. That alone somewhat pushes the boundary of what one would consider “small form factor”, but we’re getting ahead of ourselves. Let’s take a look at the specs, go inside the NUC 13 Extreme, and then see what it can do... 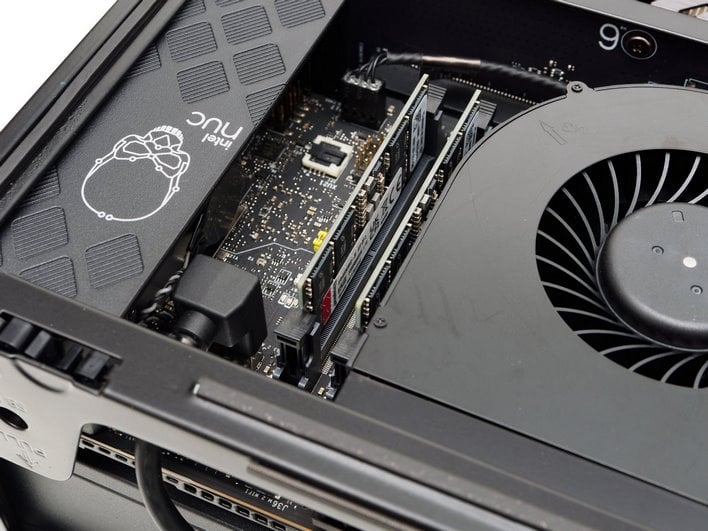 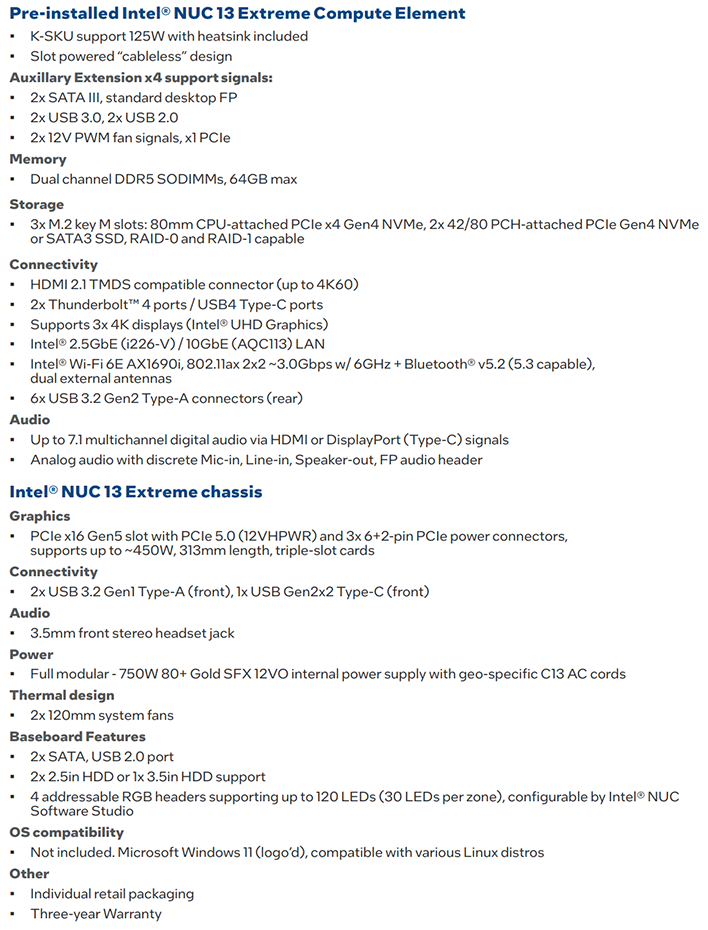 The NUC 13 Extreme Compute Element actually houses a standard LGA1700 desktop socket for Raptor Lake-based 13th Gen Core processors. That socket resides on a compact PCB, with headers and sockets populating both sides, and back-panel IO at the rear. Although the Compute Elements will come pre-populated with 13th Gen Core desktop processors, the motherboards use mobile SO-DIMMs, with support for up to 64GB of RAM at DDR5-5600 speeds. The board also houses a pair of SATA ports, a couple of additional USB headers, RGB lighting headers, and triple M.2 slots (on the backside). Our configuration did not include any RGB lighting, however. 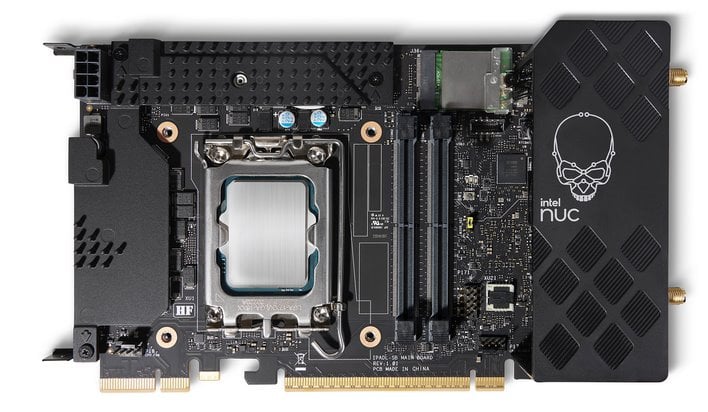 To cool the CPU, VRM, and chipset, the NUC 13 Extreme Compute Element features a relatively large array of heasink fins, and a couple of heat-plates. There is one heat-plate installed for the VRM and chipset, and another for the CPU, which are linked to a large heatsink array via a trio of heatpipes. The CPU heat-plate has a barrel-type fan attached. And the larger heatsink that juts out off to the side, is cooled by one of the large side-mounted fans integrated into the chassis. There’s a second side-mounted fan, that pulls air across the GPU and the PSU fan, resides just behind the Compute Element on the opposite side of the chassis. 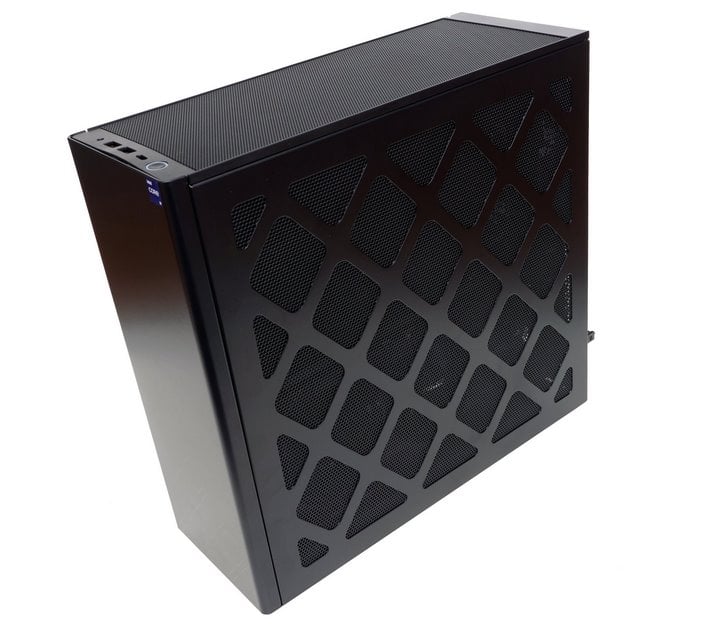 The top front of the chassis is also home to another pair of USB 3.2 Gen1 Type-A ports, one Gen2x2 USB-C port, a 3.5mm audio jack, and a lighted power button. 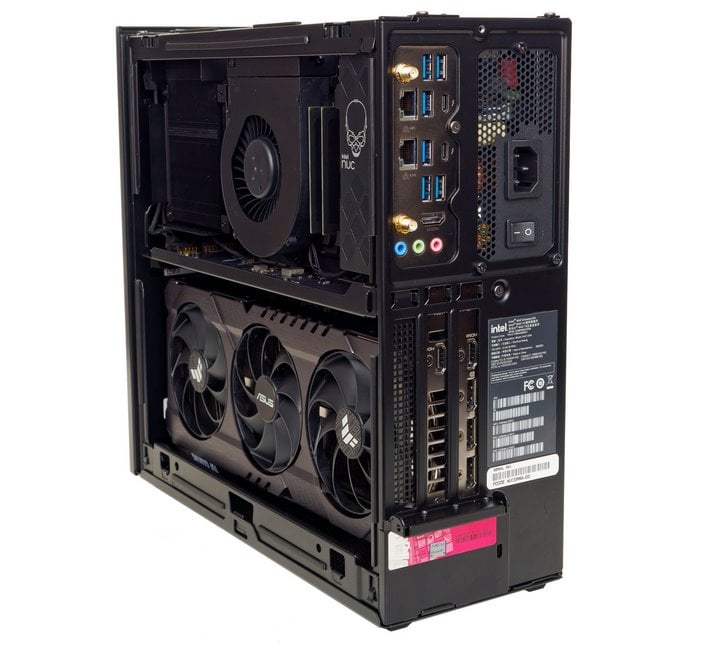 The entire chassis is about 12” x 12” x 5”, and save for the front panel, it is vented all around. The top, side, and bottom are made of metal mesh, with the larger side panels also featuring a crisscross metal pattern for additional style and rigidity. The patterns looks decent, but we would have preferred a cleaner, all-mesh look. The back of the system doesn’t have any designated vents or mesh, but the PSU and graphics card both exhaust air out the back.

Opening the NUC 13 Extreme chassis couldn’t be easier. Disengage a single thumbscrew on the thin top-panel, and it pops right off. Once that panel is removed, the side panels come right off, and the bottom panel can be removed as well. All cables are pre-routed or have anchor points to keep things secure and out of the way where possible. 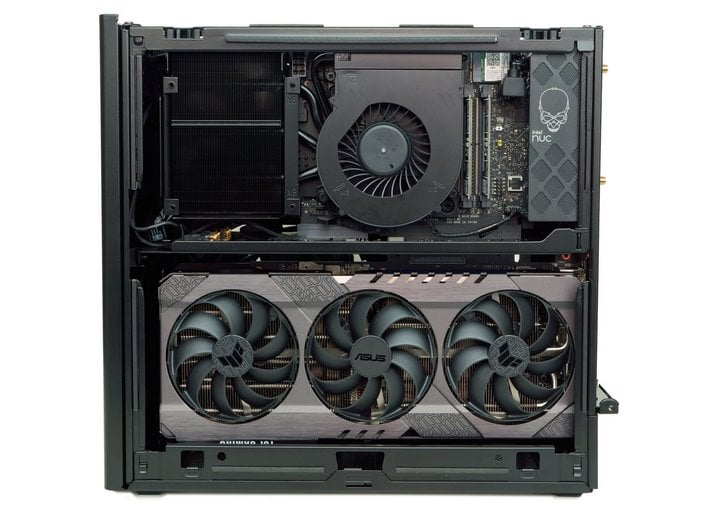 Intel's Compute Element in the NUC 13 Extreme has been redesigned to accommodate more powerful hardware – on this case, desktop-class Raptor Lake processors. And the backplane, which connects the Compute Element to the NUC’s expansion slots has been redesigned, to bring the PEG slot down to the underside. You’ll notice that the GPU is actually mounted upside down. This necessitates the use of additional (included) brackets to ensure the GPU is held securely in place, which adds some additional steps during assembly, but in practice everything worked properly in our tests.

Intel’s NUC Studio software will also be available for the NUC 13 Extreme, for users that want to tweak the system or monitor hardware health data from within Windows. We encountered some snags running the current version of the app, but compatibility fixes are in the works.

And with all that said, let’s see how the NUC 13 Extreme performs...