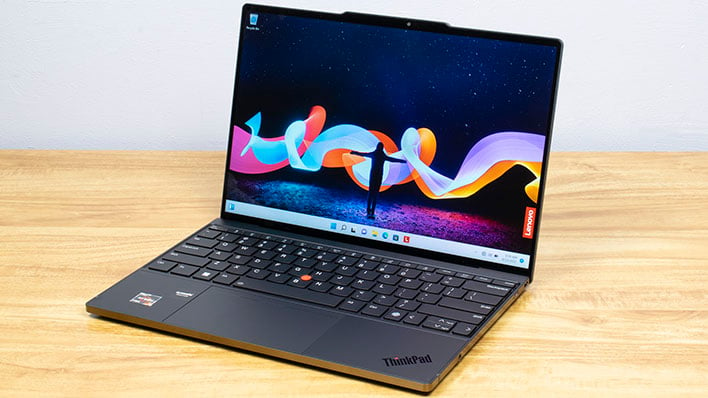 The ThinkPad X13 Gen 1 is a great AMD-powered notebook aimed at business travelers and students who need good performance and top-notch portability. The Ryzen PRO 6000 platform, like the other Ryzen 6000 U-series CPUs, ensures respectable single-threaded CPU performance, great multi-threaded throughput, and the best integrated graphics architecture around. While the battery life isn't quite on par with some other machines in this class available today, it's good enough to get most folks through their day.

Despite not being part of the ThinkPad X1 Carbon lineup, this Ryzen-fueled notebook still has great build quality, a trademark excellent ThinkPad keyboard, and a really nice display. Lenovo also put a big emphasis on sustainability with eco-friendly materials both in the body and the packaging. Available in two finishes, the ThinkPad Z13 Gen 1 comes in Arctic Grey or Bronze with a vegan leather lid. Arctic Grey is built from recycled aluminum, while the Bronze model we're looking at today uses recycled water bottles in its polyethylene terephthalate (PET) vegan leather. Meanwhile, the packaging is made entirely from 100% rapid-renewable and compostable bamboo and sugar cane fiber. 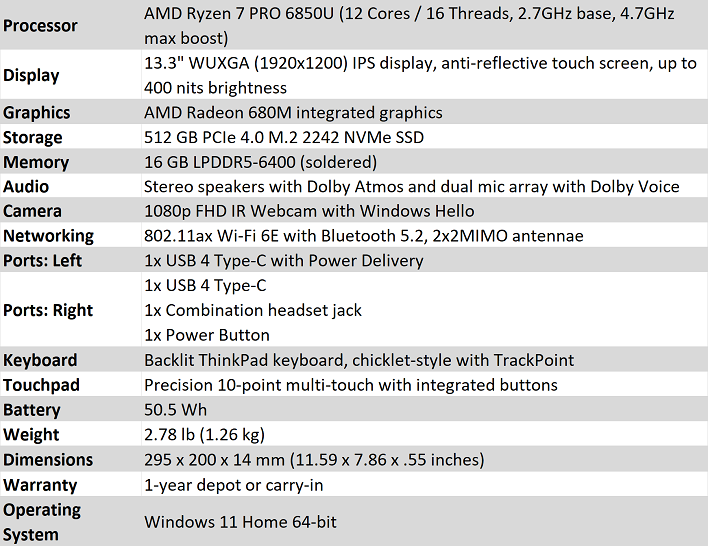 The ThinkPad Z13 Gen 1 is built around AMD's Ryzen PRO 6000 platform, in this case the Ryzen 7 PRO 6850U. This eight-core, 16-thread Zen 3 processor has a maximum boost clock of 4.7 GHz and AMD Radeon 680M graphics onboard in a 15-Watt TDP. There's 16 GB of speedy LPDDR5-6400 memory with a 32 GB option available, but it's all soldered so buyers should get what they need at the time of ordering. Not soldered down at all is the 512 GB PCI Express 4.0 NVMe SSD, which uses the somewhat-unusual M.2 2242 form factor. Buyers can get 1 TB when they order, too. 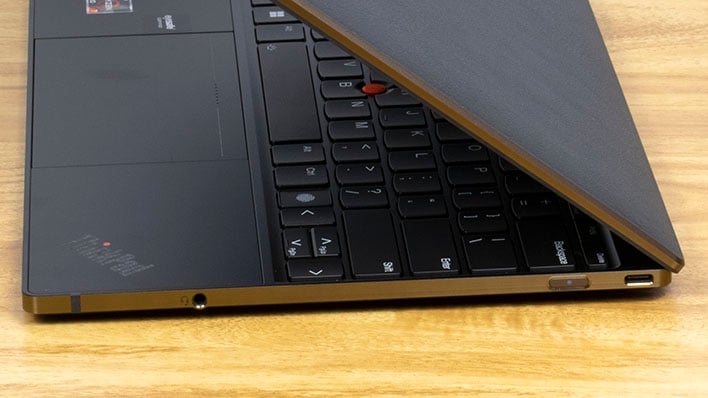 Connectivity is provided by a Qualcomm Wi-Fi 6E 802.11ax chipset that also includes Bluetooth 5.2. Wired expandability is limited to a MacBook Air's worth of USB 4 Type-C ports and a lone combination headset jack -- something that's missing from some of its contemporaries, like the Dell XPS 13 Plus. There's one USB-C port on each side of the notebook, and when charging one of them will be occupied by the AC adapter. Since these ports aren't Thunderbolt 4, buyers can get a less expensive docking solution without losing any connectivity, but such an option is not included in the box. 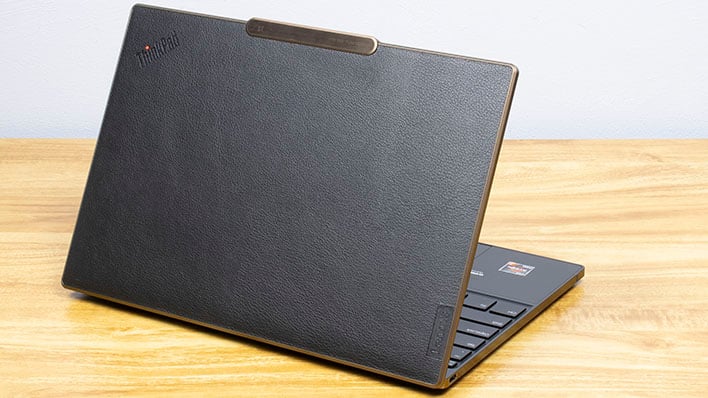 The big headliner for the ThinkPad Z13 Gen 1's construction is Lenovo's focus on sustainability. The company sent us a Bronze version for review, which has the vegan leather lid. It's made from polyester (the common name for PET) and it feels like it. Leather is supposed to feel soft and the plastic materials just don't have the same feel. Fortunately, it doesn't seem to command a price premium as our review unit's retail price is only $300 above the base model, and the additional hardware features seem to offset the price increase. We'd opt for recycled aluminum, but one thing we can say for sure is that the vegan leather is distinctive, and it looks good.

Aside from the sustainability efforts, the ThinkPad Z13 Gen 1 doesn't look any different than most ThinkPads. It's a very slim and trim laptop that weighs in at just 2.76 pounds and is barely any bigger than the 13.3" 16:10 display. It'd be very easy to just toss into a bag and tote around with us. The build quality is definitely very good. We found the hinge to be solid, the display doesn't wobble, and the rest of the materials feel premium. 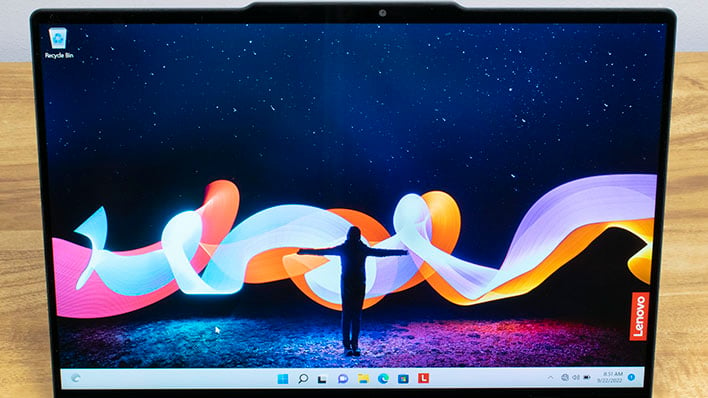 We're seeing more and more laptops these days with 16:10 displays, and the ThinkPad Z13 Gen 1 is a part of that group. The native resolution is limited to 1,920 x 1,200, but comes in both touch-enabled and non-touch displays. We'd have liked to see a 3,840 x 2,400 option, as it really makes 4K HD videos pop, but for the price we're definitely not complaining. Unfortunately, the maximum brightness of our touch display is just 300 nits, which is fine indoors, but could make working outdoors in direct sunlight challenging. Color saturation is good and the viewing angles are very wide, so on the whole the display is pretty good.

The ThinkPad Z13 Gen 1 has a distinctive lip above the display that houses the 1080p IR webcam. We saw something like this on the Snapdragon-powered ThinkPad X13s, and it doesn't really bother us. The webcam's resolution is what likely drove this decision, and we definitely prefer a high quality webcam and the distinctive lip to a fat upper bezel or a weirdly notched display (we're looking at you, Apple). Because of its IR functionality, facial recognition is supported by Windows Hello, and there's a fingerprint reader built into the keyboard as well.

A pair of noise-canceling mics flank the webcam and do a nice job of making sure we can be heard on conference calls. The speakers have Dolby Atmos certification, but their sound quality is nothing special given their size. They're fine for video chats and Teams meetings, but not sufficient for streaming movies or music. Bass is definitely lacking, but the headset jack means that external speakers are an upgrade option. 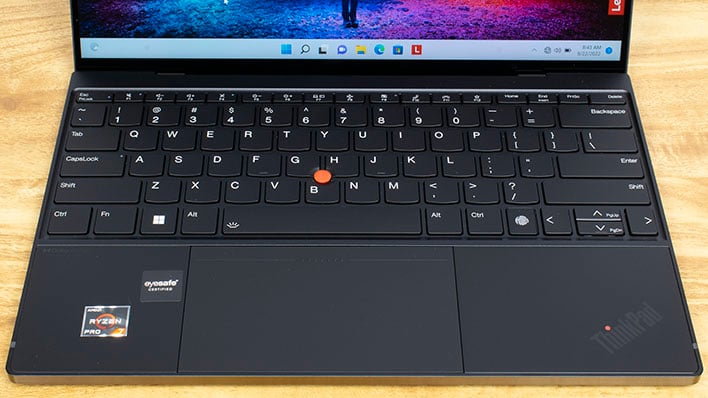 Typing on a ThinkPad is always a real treat. Lenovo's keyboards are universally excellent on the company's flagship lineup, and fortunately the company did not cheap out on this lower-priced AMD model. As always, the keyboard -- which spans from edge to edge on this 13.3" notebook -- was very responsive with good key travel and good backlighting. Due to the size, some compromises in key placement have to be made - most notable the up and down arrows being half-sized. Right in the middle is the expected TrackPoint pencil eraser-sized nubbin that people seem to love, but there are no discrete mouse buttons for it. You'll have to click or tap the trackpad, which is as big as it can possibly be without making the laptop bigger. It supports gestures and multi-touch and makes a pleasant clicking sound when pressed. 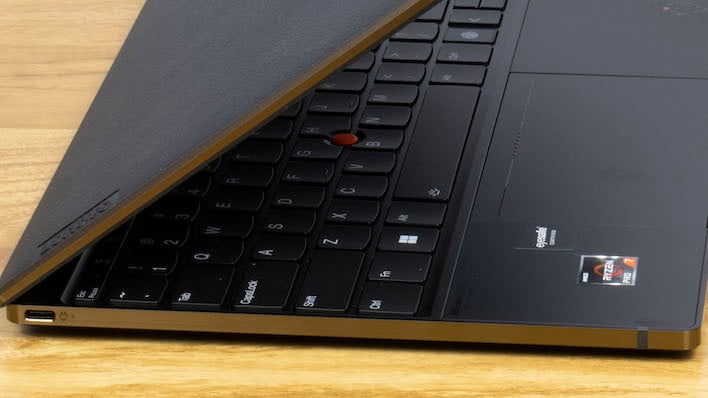 Overall, we're pleased with the build quality and think that the ThinkPad Z13 Gen 1 looks really great. The only downside we'd point out is the lack of expandability. As mentioned previously, there's only a MacBook Air's worth of expansion options for USB. At least they're spread out with one USB-C port on each side of the laptop. We would have liked to see this doubled with two a side, or perhaps an SD card reader for photographers on the go, but that's nitpicking. The ThinkPad Z13 Gen 1 looks good and feels great in the hand.

The ThinkPad Z13 came to us running Windows 11 Home. As expected, the software loadout was pretty minimal. There was no trial antivirus sucking up resources and nagging buyers right out of the box, and the only applications that came preinstalled were either part of a driver control panel or come from Lenovo itself. All of the system management features are handled in Lenovo Vantage. 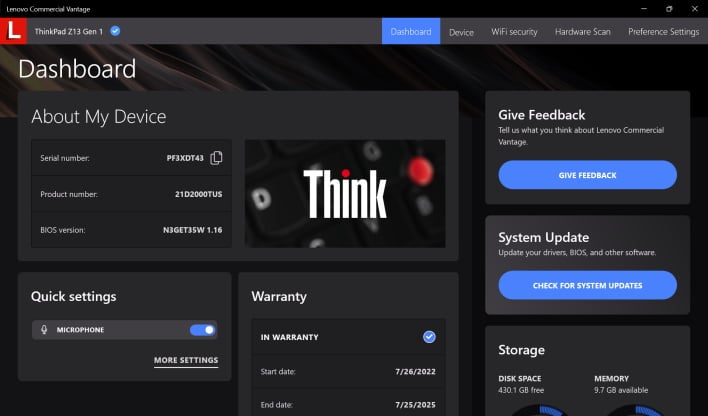 The Vantage application has device information, system diagnostics, driver and firmware updates, Wi-Fi management, and power settings. The ThinkPad Z13 can switch between two different power settings: Performance and Battery Saver. It came configured with the Performance mode enabled out of the box, and so this is how we did all of our testing, including battery life. There's a hotkey combination that allows switching between the two modes, so out in the real world buyers can flip between the two without having to open the app.

Now that we've met the ThinkPad Z13 Gen 1, it's time to see how this Ryzen PRO notebook handles our battery of performance tests...