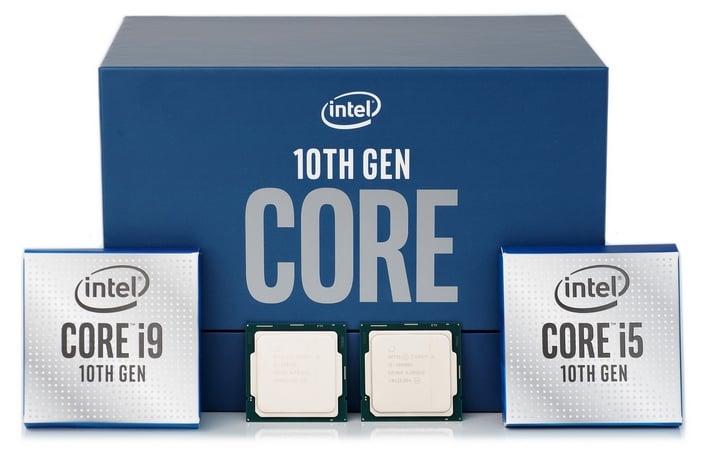 Intel’s 10th Gen Core series desktop processors are still based on the same architecture and leverage the same 14nm++ manufacturing process as their 9th Gen predecessors, but Intel has made numerous changes in an attempt to inject even more performance, efficiency, and value. These new chips have more cores (or threads) up and down the stack, higher peak clocks, and some new features – like thinner slabs of silicon and thicker integrated heat spreaders with more copper to aid cooling. There’s also a new socket bolted to the Z490 chipset to enhance power delivery and a few new features associated with the Z490 chipset as well.

We’ve detailed all of the new stuff coming to this platform in our initial coverage of the announced last month, and also showed off the ASUS Maximum XII Hero WiFi motherboard. If you missed that article, by all means check it out before continuing. What we’ll be showing you here today are a couple of the stand-outs in Intel’s initial 10th Gen Core series line-up – the flagship Core i9-10900K and mid-range Core i5-10600K, to be more specific – along with one of Gigabyte’s enthusiast-class motherboards, the Z490 Aorus Master.

First up, let’s get some specs out of the way and then we’ll dig in and see how Intel’s latest mainstream desktop processor platform holds up against the competition... 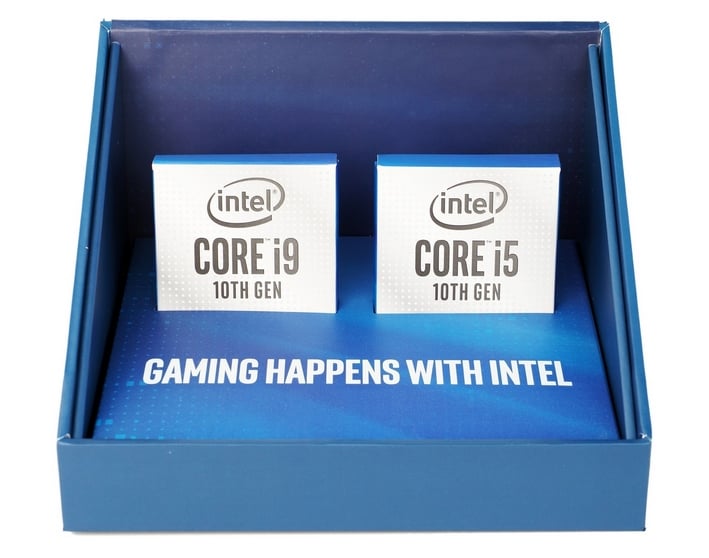 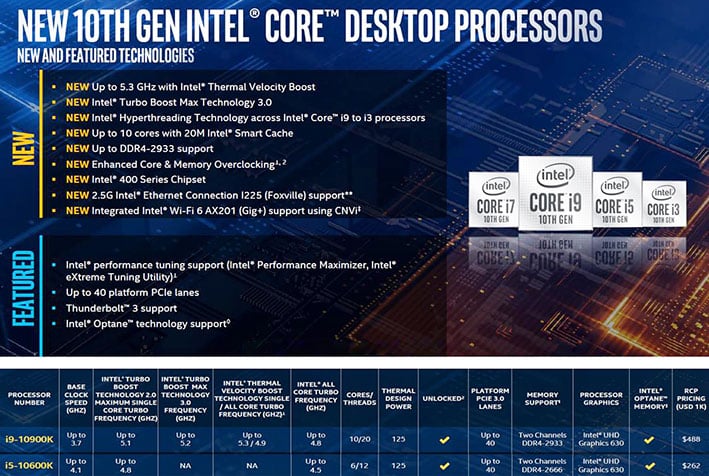 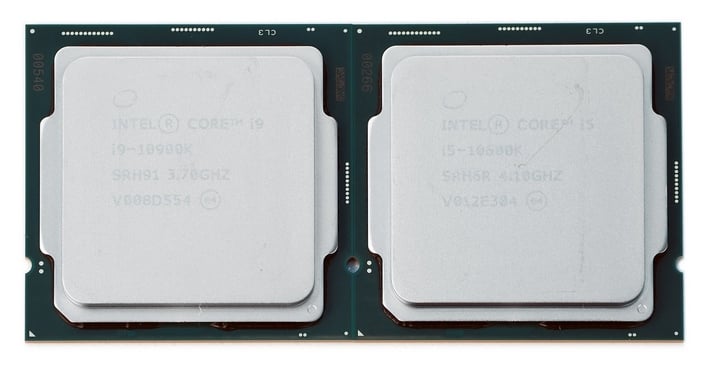 
10th Gen Intel Core series processors look much like the previous-gen, though there are some fundamental differences. And despite the new socket and motherboards, they’ll work with all of the same coolers. From the top, there’s not much to see that's all that different from the previous-gen (save for the specific branding), but that integrated heat spreader is actually somewhat thicker than the 9th Gen’s (to account for the thinner die underneath). And although it resembles the 9th Gen, the underside on the 10th Gen is obviously different and is comprised of 1200 pads (versus 1151), along with some surface-mounted components. 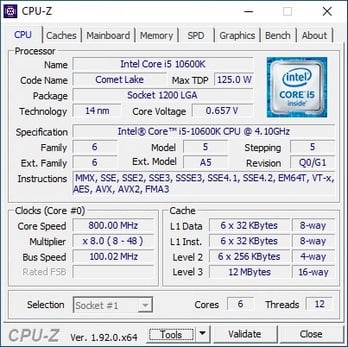 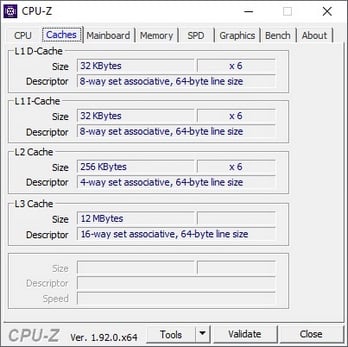 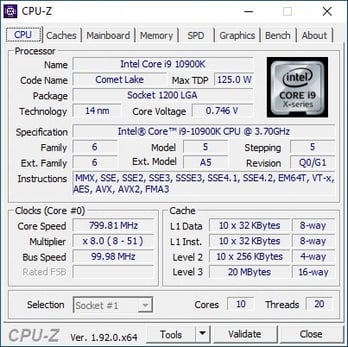 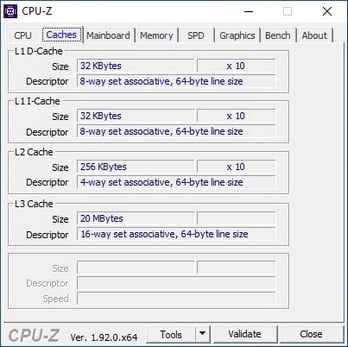 
The Intel Core i9-10900K’s and Core i5-10600K’s CPU-Z details are outlined in the images above. Both processors are based on the same stepping / revision, but differ in terms of their clocks and core counts. There’s 64K (32K + 32K) of L1 cache per core, 256K of L2 cache per core, and the larger L3 caches are 16-way set associative. Notice the Core i5 now has Hyper-Threaded enabled, so that 6-core processor can handle 12-threads simultaneously. That will result in a significant boost in multi-threaded performance for 10th Gen Core i5 processors. 10th Gen Core i3 and Pentium Gold processors have HT enabled as well, which wasn't always the case on previous-gen processors.

Along with the processors, Intel also sent over a Gigabyte Z490 Aorus Master motherboard. Gigabyte has a ton of Z490-based motherboards coming down the pipeline, with the Aorus Master sitting near the top of the stack, a notch or two below the jam-packed Z490 Aorus Xtreme. 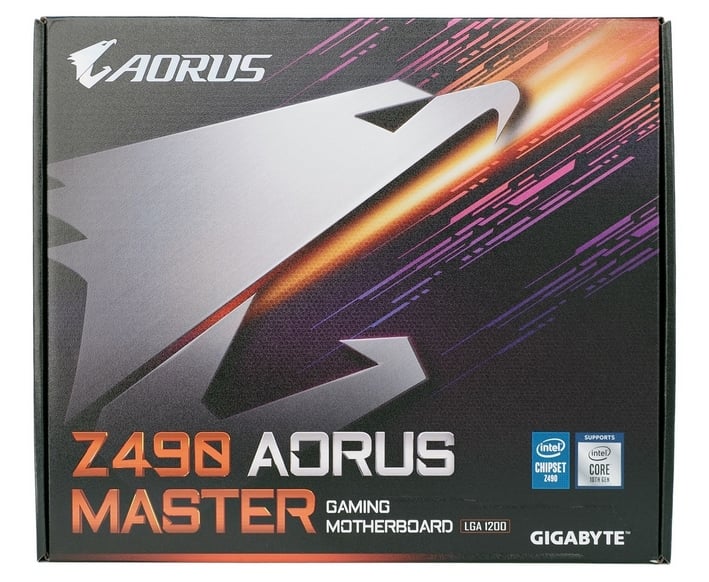 As has been in the case for the last few generations of “Master” motherboards from Gigabyte, this one is stacked with goodies including ALC1220VB-based audio with a 125dB SNR, a headphone amp, configurable RBG lighting, server-class digital power circuitry, heatsinks and heat-plates top-and-bottom, metal-reinforced slots, multiple M.2 slots (also with heatsinks), intelligent fan headers, and all the features offered by the Z490 itself. 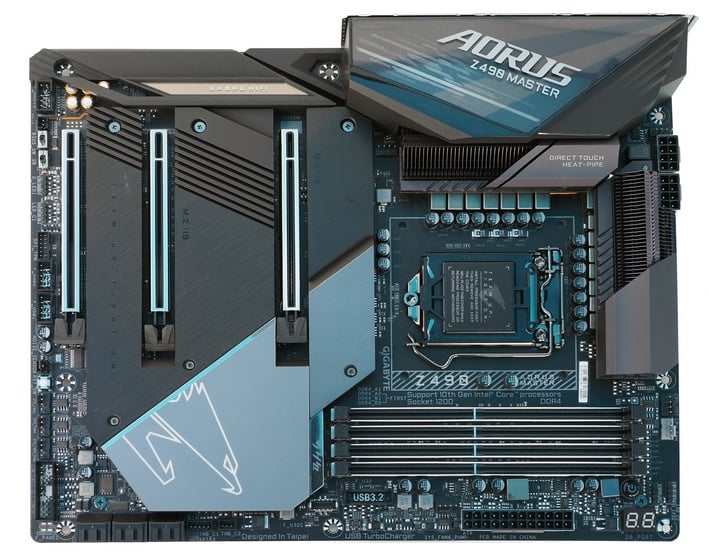 The Z490 Aorus Master is heavy and sturdy. The board is stiff and rigid and has a premium look and feel all-around. Power on this board is handled by a newly-designed, 14 Phase Digital VRM solution with 90A Smart Power Stages and Tantalum Polymer cap array. The VRM is also outfitted with a very dense array of heatsinks fins and direct-contact heat-pipes to help keep temperatures in check. There’s a metal base-plate on the backside of the PCB as well,to further help dissipate heat, and the power connectors feature solid-pins, which are sturdier and more reliable than the hollow press-fit pins found on many cheaper motherboards. 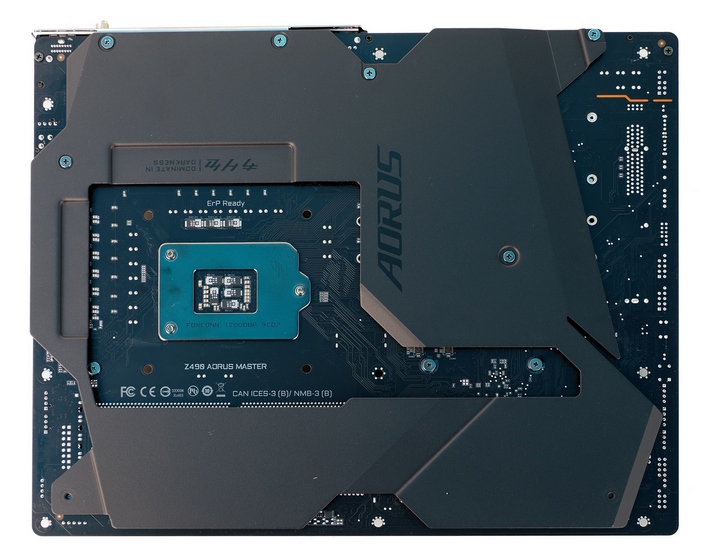 All Aorus-branded motherboards feature Gigabyte’s latest GUI-enabled BIOS, with “Smart Fan 5” – the latest iteration of Gigabyte’s fine-grained fan controls that give users the ability to tweak and fine-tune their cooling using sensor data from multiple areas around the board. 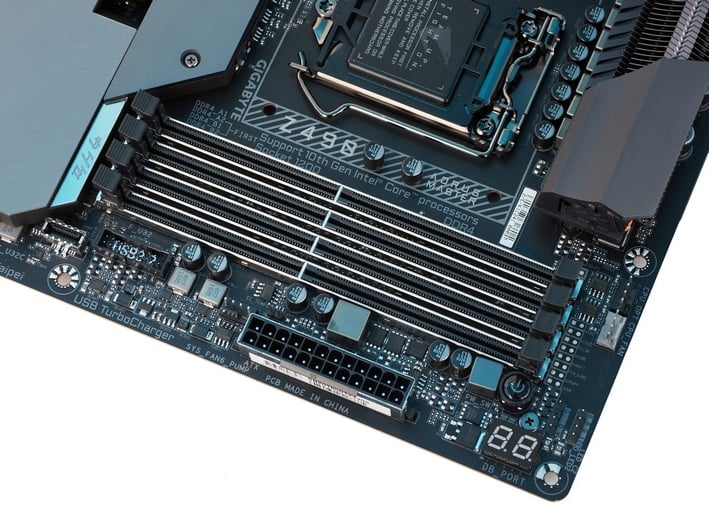 Like the previous-gen Z390 Aorus Master, this new Z490 Aorus Master is also equipped with hybrid fan pin headers. Gigabyte’s hybrid fan pin headers can auto-sense what type of fan or device is plugged into the header and can tune settings accordingly. For example, the headers can differentiate between a water pump and high-speed, PWM fan, and the headers support up to 3 AMPs each with built-in over-current protection. In addition, eight fan headers are accompanied by headers for additional thermal sensors as well, which can be placed strategically around a system to monitor various temperatures and tune fan speeds accordingly. 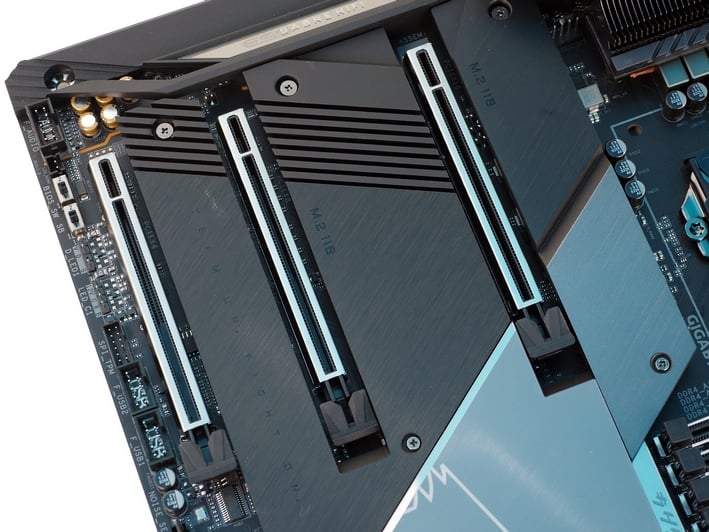 The Z490 Aorus Master also features fully-customizable RGB lighting across a few segments of the PCB (for example, in the shielding over the VRM and on the chipset cooler and audio shielding). The lighting can be configured via Gigabyte's “RBG Fusion” app for different modes (pulsing, color cycling, etc. -- 9 modes in total) and there are a couple of additional headers on the board for adding more LED light strips throughout a chassis as well. 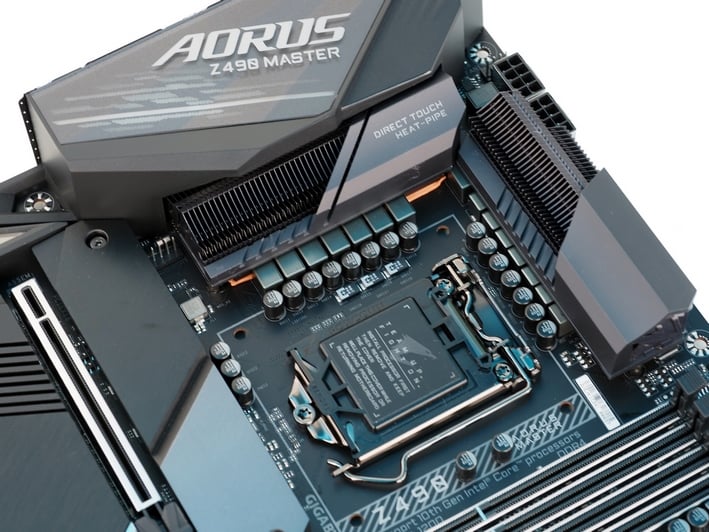 The Z490 Aorus Master also features triple M.2 slots with heatsinks, 6 SATA ports (with support for RAID), USB 3.2 gen 1 and gen 2, with a Type-C connector on the back, and all of the I/O you’d expect from a high-end board. The BIOS is loaded with overclocker friendly features as well, and its accessory bundle includes some cool stuff too. 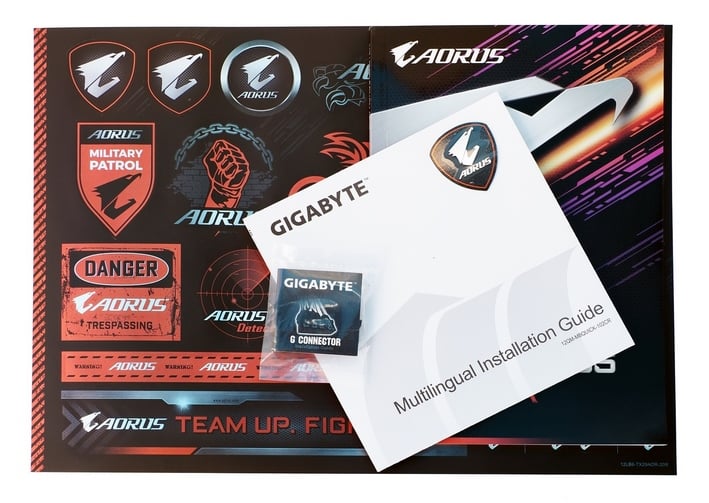 The Gigabyte Z490 Aorus Master includes a handful of SATA cables, a user’s manual and installation guide, drivers and utility software, an Aorus case badge, some easy case connectors to simplify installation into a chassis, external antennas for the built-in Wi-Fi, and a sheet of Aorus-branded decals. Motherboards normally come with a custom IO shield as well, but the shield on the Z490 Aorus Master actually comes pre-mounted to the board, so there’s no need to install one onto your chassis by hand.

That’s enough with the particulars, though – let’s get these puppies fired up and see what they can do...
NEXT PAGE