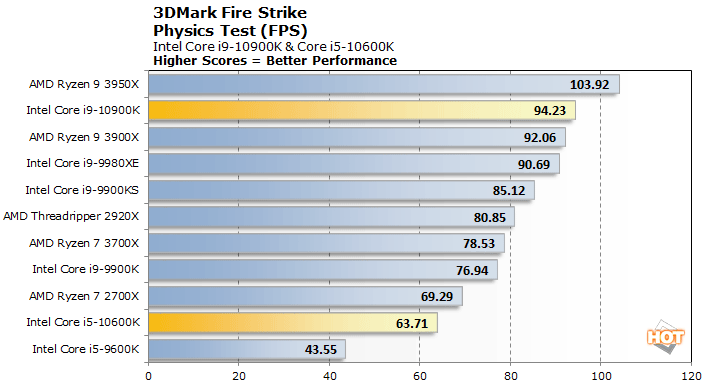 The multi-threaded 3DMark game physics tests shows the Core i9-10900K outpacing the Ryzen 9 3900X, but it couldn't catch the monster, 16-core 3950X. The Core i5-10600K shows a monumental leap over the previous-gen, but ultimately it can't catch the higher-end 8-core processors here. 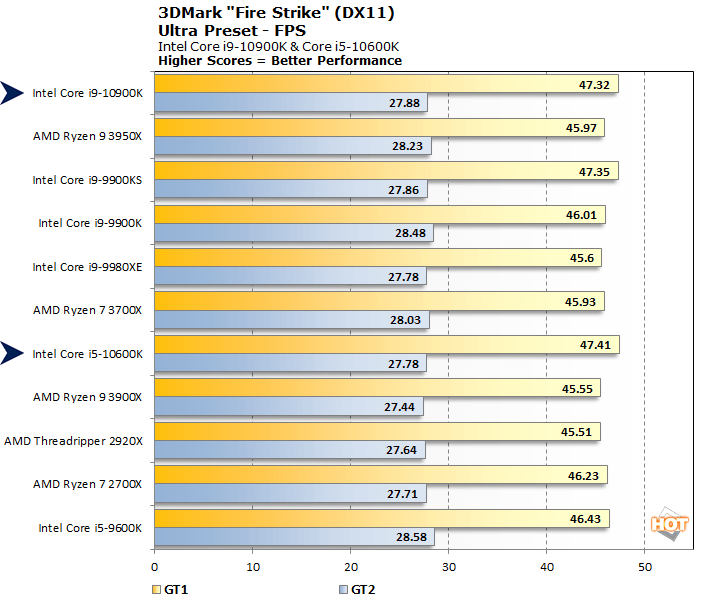 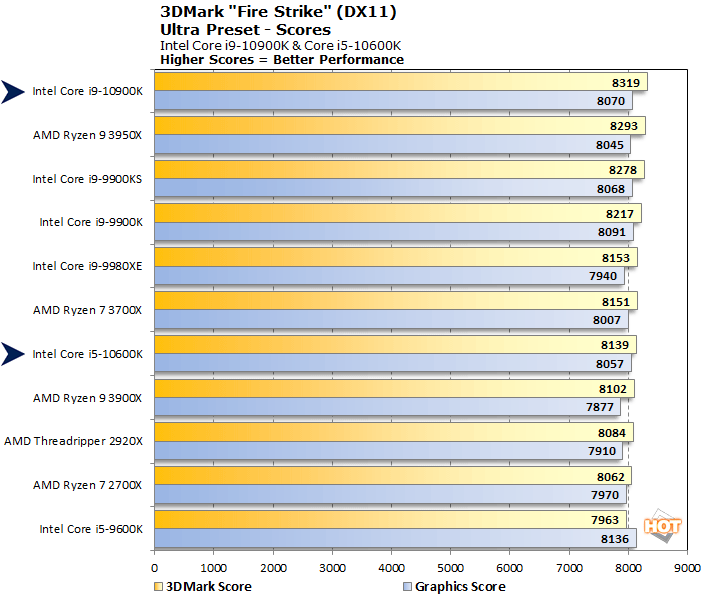 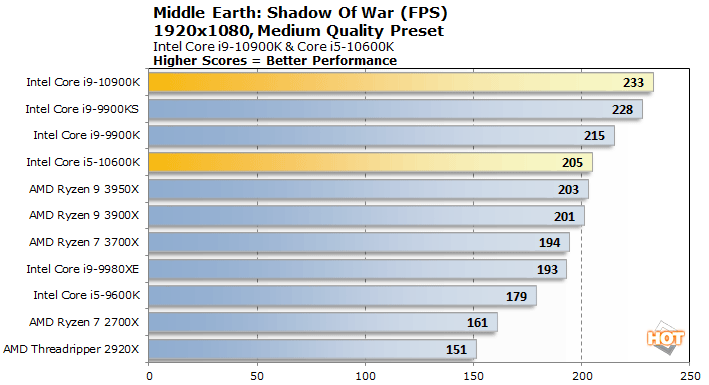 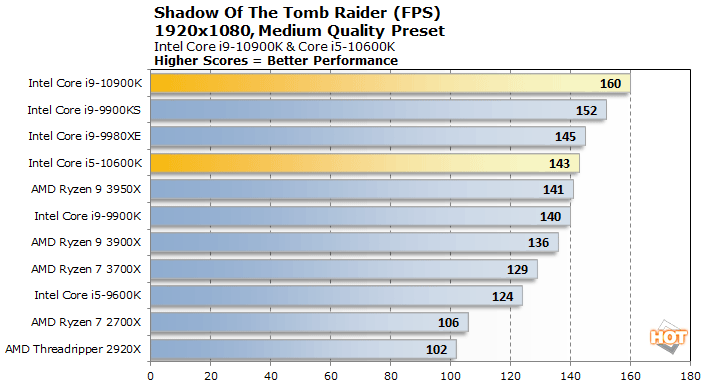 The medium-quality, high-framerate 1080p in-game tests also how the Core i9-10900K performing exceptionally well, leading the pack in both games, and taking the crown from the Core i9-9900KS. The Core i5-10600K also puts up an excellent showing, finishing ahead of all of the Ryzen processors. 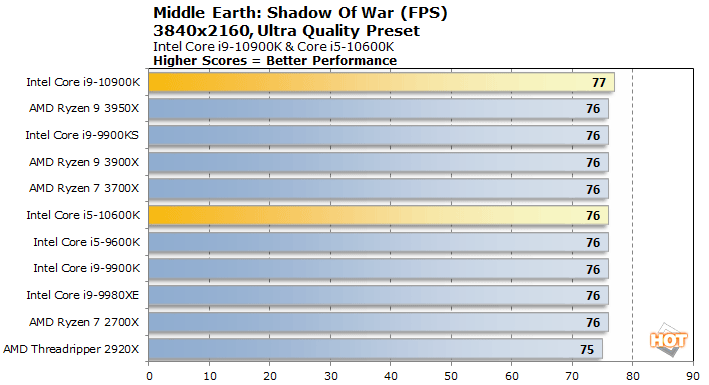 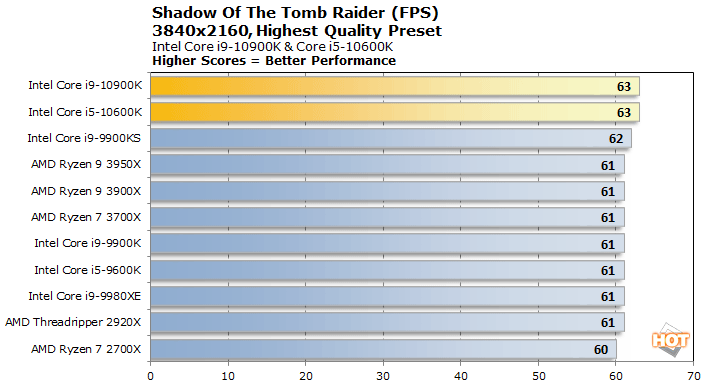 When you crank up the resolution and image quality, and shift the performance bottleneck onto the GPU, things balance out considerably and the playing field levels out. Though the Core i9-10900K and Core i5-10600K land near the top of the heap once again, the high-resolution game tests are effectively tied.

We also spent some time overclocking the Core i9-10900KS using the Asus Maximus XII Hero WiFI motherboard and Corsair H80i v2, to see what kind of additional horsepower the processor had lurking under its hood...

As you would expect, overclocking a Core i9-10900K processor is very similar to any other previous-gen Intel K-SKU processor. Because the 10900K is unlocked (like all K-SKUs), overclocking it is simply a matter of altering a few multipliers, tweaking voltages, and dealing with the additional heat and power requirements. These processors can be overclocked by adjusting BCLK frequencies as well, so it's possible to really fine tune the end result, but manipulating the multipliers is where the largest gains will come from. 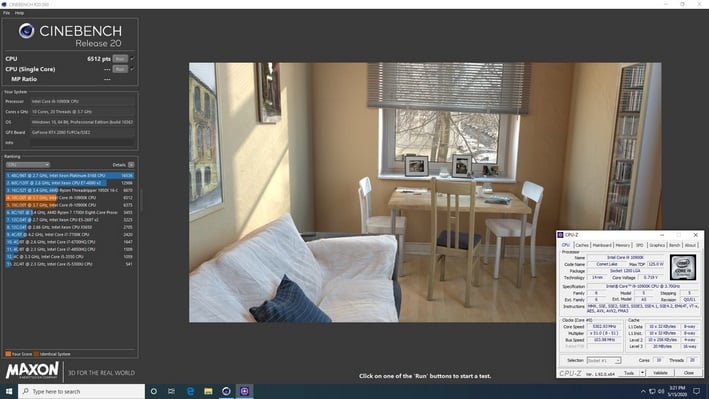 As we typically do, to ensure our results are repeatable by most consumers, we took a somewhat conservative approach to overclocking the Core i9-10900KS. Our results should be repeatable with most of the chips that end up out in the wild, assuming you’ve got similar hardware and everything is working properly. You shouldn’t need exotic cooling to pull off what we did here -- we used an off-the-shelf Corsair H80i AIO liquid cooler with the motherboard and processor installed in a mainstream NZXT mid-tower case, with a couple of intake and exhaust fans, though the side-panel was removed.

During normal operation, we saw our Core i9-10900KS' voltage ratchet up to about 1.3v. So, to push things a little further and see what our sample could do, we manually cranked the core voltage up to 1.325v with a .05v offset and shot for a 5.2GHz (51x100MHz) all-core overclock and everything worked as it should. Next, we cranked up the multiplier to 53x across all cores, and again the system remained stable, but the CPU would routinely shoot to over 100°C. Interestingly enough, if we dropped to a 52X multiplier, but altered the BCLK by a couple of MHz, we could get to 5.3GHz all-core, and temperatures wouldn't top 100°C. For fun, we also enabled ASUS' automated AI Overclocking option to see what it would do.

In its stock configuration, the Core i9-10900KS idled at around 38-40°C (give or take a coupe of degrees across the 10 cores) and peaked in the upper-80s. Even modestly overclocking the chip, however, immediately caused much higher temperatures with our mainstream liquid cooler. Intel is clearly pushing the limits of its 14nm++ process with the 10-core Core i9-10900KS and any significant overclocks are going to require some seriously robust cooling. 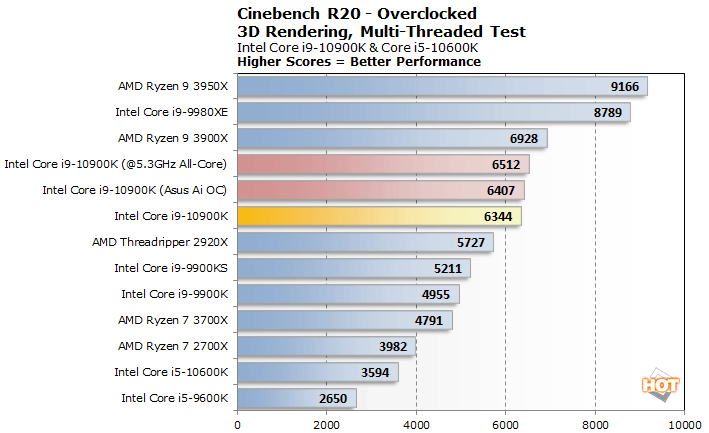 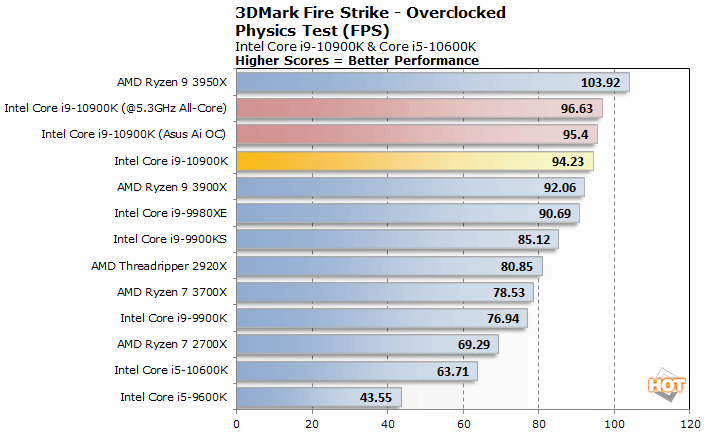 That said, we were able to wring some additional performance from our chip. While we had the chip overclocked, we ran a few tests and saw some mild gains in the 3DMark Physics and Cinebench tests, but it wasn't enough to change the ranking in the charts. However, with such a modest increase in the peak frequency, the boosts weren't going to be all that significant, regardless. Asus' AI OC option was a quick and simple way to boost performance a couple of percentage points, but going to manual route and pushing things a little further will obviously yield even more performance.

Throughout all of our benchmarking and testing, we also monitored how much power our Intel 10th Gen-based rig was consuming with a power meter, versus the other systems we used for benchmark comparisons. 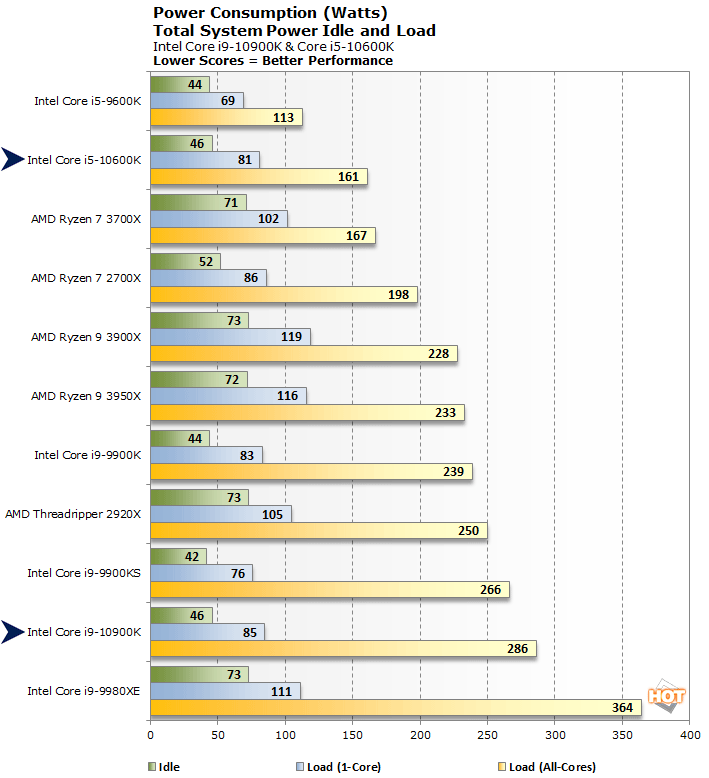 Idles and single-core power are relatively low with the Core i9-10900K and i5-10600K, especially in light of AMD's significantly higher idle power with the Ryzen 3000 series + X570. Load power, however, is a completely difference story, which was to be expected. The Core i5-10600K consumes much more power than its predecessor under load, but it's not outrageous and is easily justifiable, considering the 10600K's much better performance. The Core i9-10900K, on the other hand, consumed 53 more Watts under load than even the 16-core Ryzen 9 3950X.

While the Core i9-10900K's peak power consumption isn't appealing in light of its performance, it is not so high as to be a major hindrance. Anyone buying a processor in this class is also going to spring for adequate cooling, which will likely be quiet as well. It's not like that additional power consumption is going to result in much higher noise levels, etc.

We also monitored power while overclocking and at peak sat a nearly 70 Watt increase in peak power under load. The Asus AI OC option yielded some additional performance, with a modest bump in power. Going the manual overclocking route and boosting all of those cores to 5.3GHz, however, spiked power considerable.  If you plan to push a chip like this even further, obviously a good cooler and capable PSU are must-haves.