Sometimes it feels as though we are stuck in a perpetual holding pattern for Intel's upcoming Comet Lake-S desktop processors, but rest assured, they will get released. As to exactly when, you can circle April 30, 2020 on your calendar. Just do it in pencil or erasable ink, because this date has not been confirmed.
It is at least feasible, though. Intel already launched its Comet Lake CPU architecture to mobile, with several Comet Lake-U and Comet Lake-Y processors sporting official product pages. What we are waiting for at this point is for Intel to launch its higher end Comet Lake-H CPUs for laptops, and Comet Lake-S chips for desktops.
In regards to the latter, El Chapuzas Informatico (via Videocardz) claims an announcement is coming on April 30. According to the site, this will be an unveiling only—embargoes on reviews and benchmarks will be lifted in the second week of May, which, by extension, also means that is when the Comet Lake-S lineup will be available to purchase.
The site goes on to downplay Comet Lake-S as a whole, noting that Rocket Lake is the more interesting pending product launch. And to some extent, that is true. Comet Lake-S is still using Intel's 14-nanometer node, albeit it's another refinement. So from a technical standpoint, Comet Lake-S is not super intriguing, though to be fair, Intel has been able to squeeze quite a bit of performance out of its 14nm node.
It remains to be seen how many Comet Lake-S processors will debut initially. Going by past rumors, there will be more than a dozen Comet Lake-S CPU models, including unlocked K chips, F series parts that lack integrated graphics, and KF models (unlocked and no integrated graphics).
The lineup is rumored to culminate in the Core i9-10900K. It is a 10-core/20-thread processor with a 3.7GHz base clock and up to a 5.3GHz turbo clock (via Thermal Velocity Boost), with a 125W TDP.
Incidentally, APISAK just recently posted another benchmark lake of what is supposedly a Core i9-10900K part nestled into an ASRock Z490M Pro4 motherboard. Here's a look... 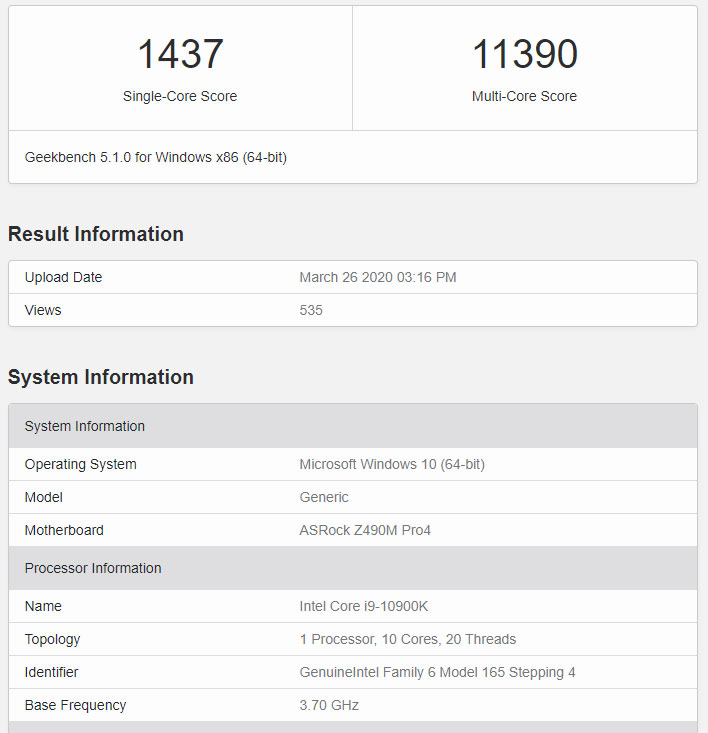 Scores fluctuate somewhat wildly when sifting through Geekbench's database, and it is easy to find both faster and slower scores attached to Intel's current-generation Core i9-9900KS (Coffee Lake). We'll reserve judgement on performance until we have had an opportunity to test things out for ourselves.

Generally speaking, though, we would expect single-core performance to be roughly the same, and multi-core performance to tip in the Core i9-10900K's favor, since it is working with two additional cores and four extra threads.
There is also the platform to consider. We'll have to wait and see what potential performance gains Intel's Z490 chipset might bring to the table as well.