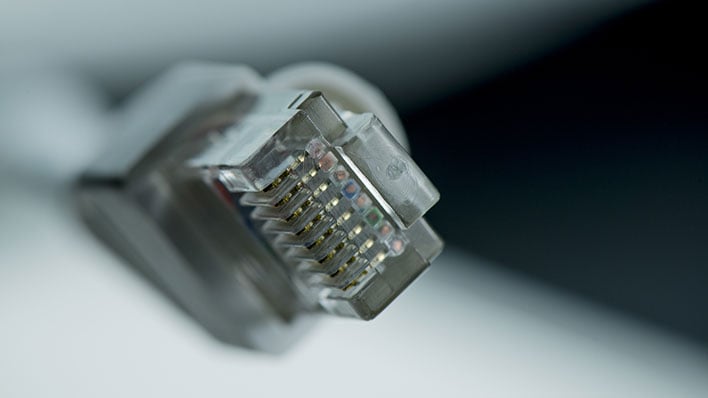 Intel is presumably very close to launching its Comet Lake-S desktop processors, and with it will come a flood of new motherboard models based on the company's Z490 chipset. Interestingly, those upcoming boards may have a minor performance hiccup related to the onboard Ethernet controller, according to details outlined in a leaked slide.
The slide points to Intel's "Foxville" Ethernet controllers. These consist of the I225-V (already launched) and I225-LM (announced), both of which are outlined on Intel's ARK website. These Ethernet controllers support speeds of up to 2.5 gigabits. However, the slide notes a variance in the inter-packet gap (IPG) compared to the IEEE 2.5 BASE-T standard. 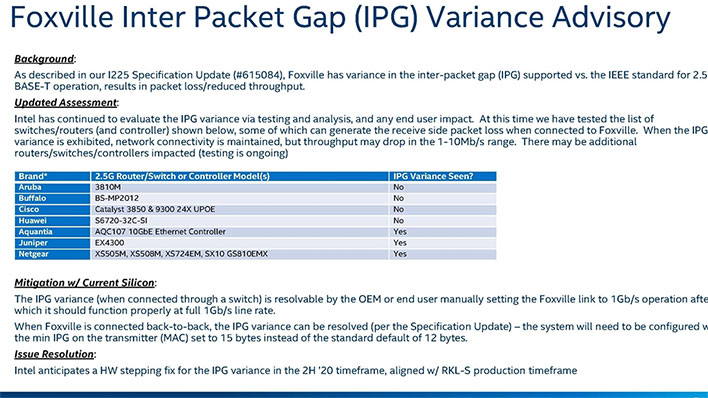 According to the slide, Intel's testing has shown a performance loss in the range of 1-10Mbps due to the troublesome variance. When this happens and packets fall by the wayside, network connectivity is still maintained, there just could be a drop in throughput.
The slide lists several makes and models of affected routers, switches, and controllers. It also states there could be others that are affected, but not listed, as testing is ongoing.
While interesting, this is not a huge deal, at least on faster connections. Furthermore, the slide states OEMs and users can mitigate the performance hit by configuring the link to run at 1Gbps rather than 2.5Gbps, if the added bandwidth isn't needed.
Most systems today still ship with 1GbE LAN controllers, though 2.5GbE is starting to become a bit more common. Some of AMD's hardware partners have shipped X570 motherboards with 2.5GbE support, through the use of a third-party controller. Same goes for routers, like the ASUS ROG Rapture AX11000, which has a built-in 2.5GbE LAN port.

It remains to be seen if Intel's hardware partners might turn to third-party controllers as well, to sidestep the issue. Looking further down the line, the slide indicates Intel will implement a hardware fix in the second half of 2020, when its Rocket Lake-S desktop processors arrive. Incidentally, Rocket Lake-S might also see the arrival of support for PCI Express 4.0 in the Intel camp.