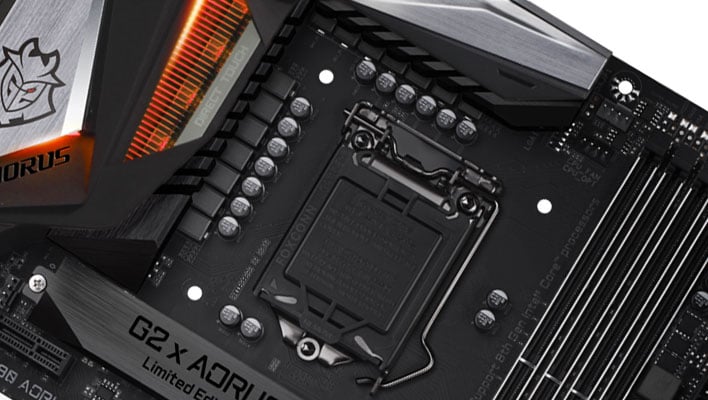 Motherboard makers can ill afford to let their foot off the gas pedal, not when there are now chipsets on the horizon. Intel is readying its Z490 chipset for its upcoming Comet Lake-S processors, while AMD is apparently prepping a B550 chipset for its Ryzen 3000 series. Meanwhile, Gigabyte is locked and loaded for both launches.
Starting with the Z490 chipset, several Gigabyte-brand models were spotted at the Eurasian Economic Commission (EEC) website back in September. They included the following models...
Since then, there have been several new models listed at the EEC, including a few more that just showed up. All of the additional models since the September leak include the following...
It is quite the extensive lineup with 17 Z490 motherboard models, and a single W480 board for home brewed workstations. Perhaps the biggest surprise, however, is the new Vision series. It is not entirely clear what will separate the Vision models from the rest of the pack.
The Z490 chipset will bring with a new socket, LGA 1200. There will not be any major I/O enhancements, such as PCI Express 4.0 support (that will have to way for Intel's 10nm Tiger Lake launch).

Based on prior leaks, the Comet Lake-S family will feature processors with up to 10 physical cores (and presumably 20 threads) of computing muscle, up to 30 PCH-H high-speed I/O lanes for port flexibility, up to 40 PCI Express 3.0 lanes (16 CPU, up to 24 PCH), integrated and discrete Wi-Fi 5 support, Intel Wi-Fi 6 support, integrated USB 3.2 Gen 2x1 (10Gbps) support, and a few other odds and ends.

Gigabyte Is Readying Motherboards Based On AMD's B550 Chipset For Ryzen

Over in AMD territory, there is a B550a chipset for OEMs, but no such equivalent for the consumer market. According to AMD's Robert Hallock, it only supports the PCIe3.0 standard and not PCIe 4.0.
"OEMs are customers, too, and they may have different needs and wants than a DIYer. Not every product decision is considered through the lens of a channel product," Hallock stated on Reddit.
It is anticipated that the regular B550 chipset for consumers will feature PCIe 4.0  support. It essentially takes its place as a mid-range offering. Just as with Z490, Gigabyte has a whole bunch of B550 motherboards planned. They include the following...
It appears there will be at least half a dozen micro-ATX and mini-ITX models for small form factor (SFF) builds, alongside several regular ATX models. And at least one of those will feature built-in Wi-Fi based on the Wi-Fi 6 (802.11ax) standard.
We will have to wait and see when all of this materializes.