Before running our selection of benchmarks, we apply the latest Windows and driver updates to the system we are testing (in this case, the HP ZBook Fury 15 G7). Other than that, we run all of our tests with out-of-the-box settings. Our goal is to test the system as it ships, but after auto-updating, to accurately reflect what buyers can expect from a retail experience. 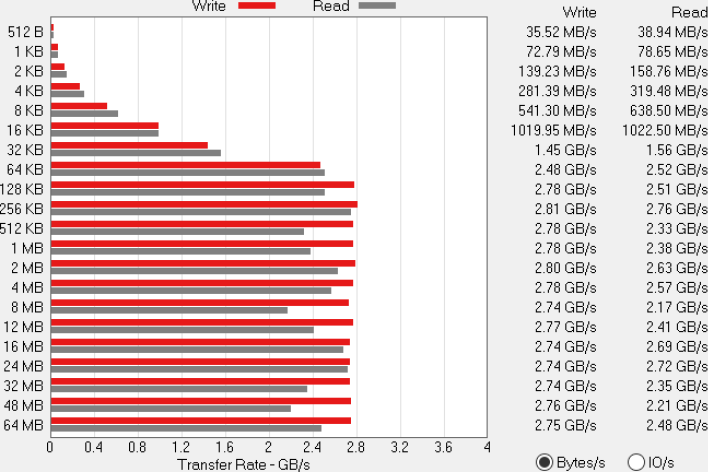 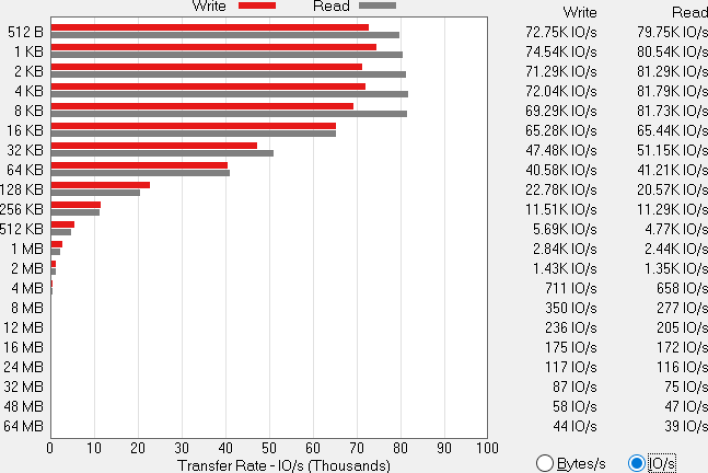 The drive in the ZBook Fury 15 G7 is a Samsung P981a, which is an NVMe SSD in the M.2 2280 form factor with four lanes of PCI Express 3.0 connectivity. It certainly performed up to the available bandwidth, eclipsing 2.7 GB per second in read bandwidth at different points. Writes were no slouch, either, hitting upwards of 2.8 GB per second.

We also wanted to take the USB options for a spin. We've got a 10 Gbps USB 3.1 Gen 2 M.2 enclosure with the Addlink S70 NVMe SSD installed. This enclosure came with a Type-A and Type-C cable, so we could plug it into both the ZBook's USB 3 Type-A and Thunderbolt 3 ports. This is not a Thunderbolt enclosure, but it does flex the USB 3.0 protocol pretty hard. 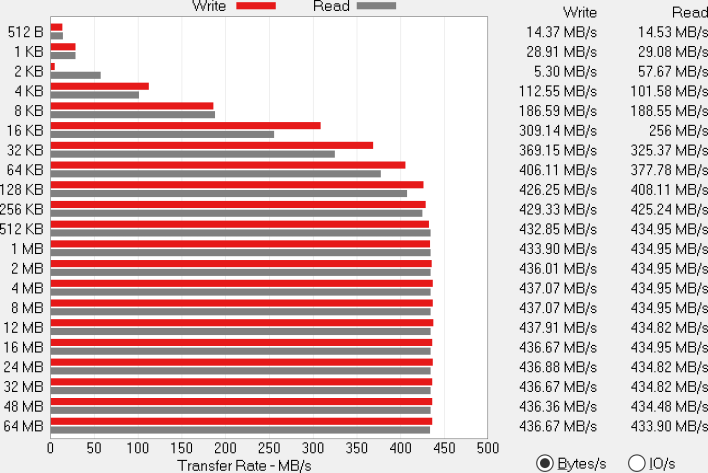 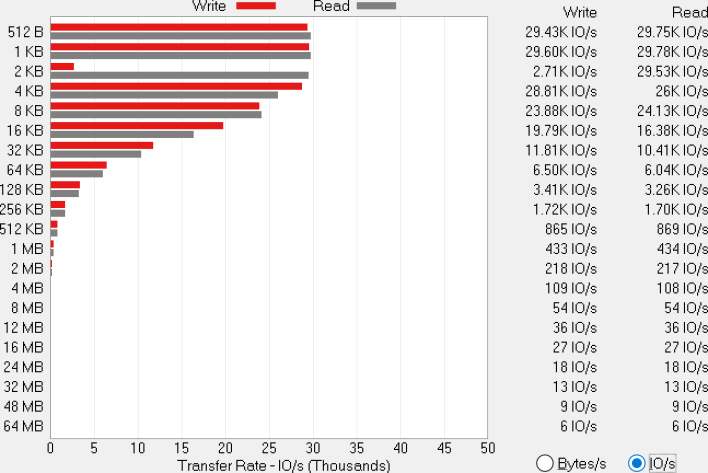 The bad news out of this particular test appears to be that the USB 3 Type-A ports only deliver 5 Gbps of bandwidth. The S70 is capable of delivering 2 GBps speeds when plugged into an M.2 port, but it tops out here just shy of 500 MB. Let's see how it does in the Thunderbolt ports. 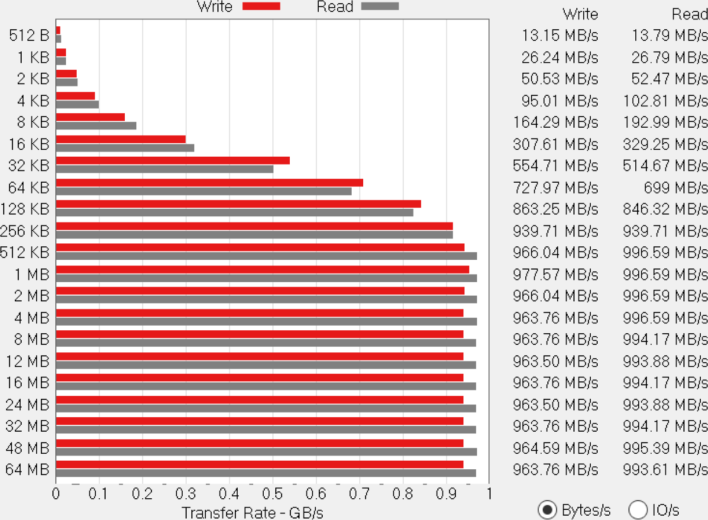 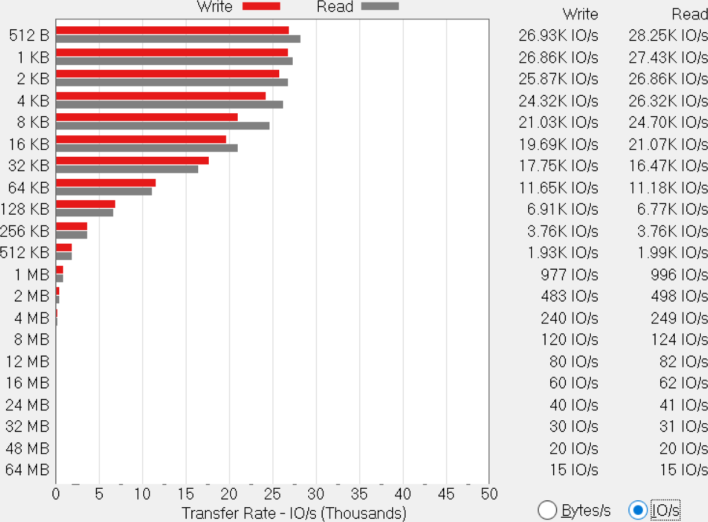 This is much more what we'd expect. The drive nearly hits 1 GB per second, which would be right at 8 Gbps, well within the range of a 10 Gbps USB port. While it's disappointing the Type-A ports couldn't get everything this enclosure is capable of delivering, at least there are very high-speed options available. Overall, it's a decent start for the ZBook. 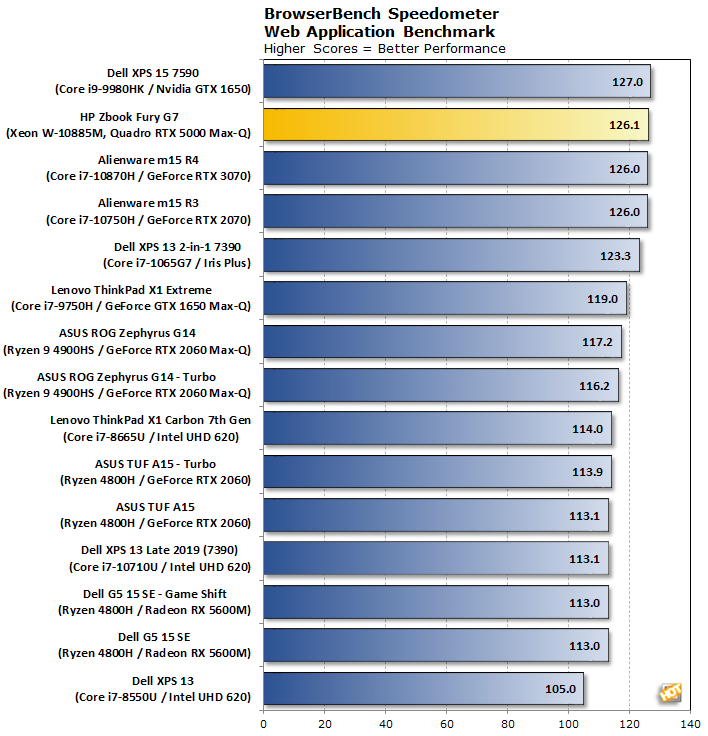 Speedometer relies on single-threaded performance, and with a maximum turbo speed of 5.3 GHz the Xeon in the ZBook Fury 15 G7 certainly delivers. The ZBook's Xeon processor is based on the same Comet Lake CPU architecture as the 10th generation Core CPUs, so it's no surprise to see the HP system right at the top with the rest. While it doesn't beat the Dell XPS 15 7590, it's basically a tie for first place.

The previous version of Maxon's rendering benchmark, Cinebench R20, takes a long to complete, so this is a good test of a notebook's cooling system. This release also drops the OpenGL test, making Cinebench a pure CPU benchmark. We tested both single-threaded and multi-threaded performance here. 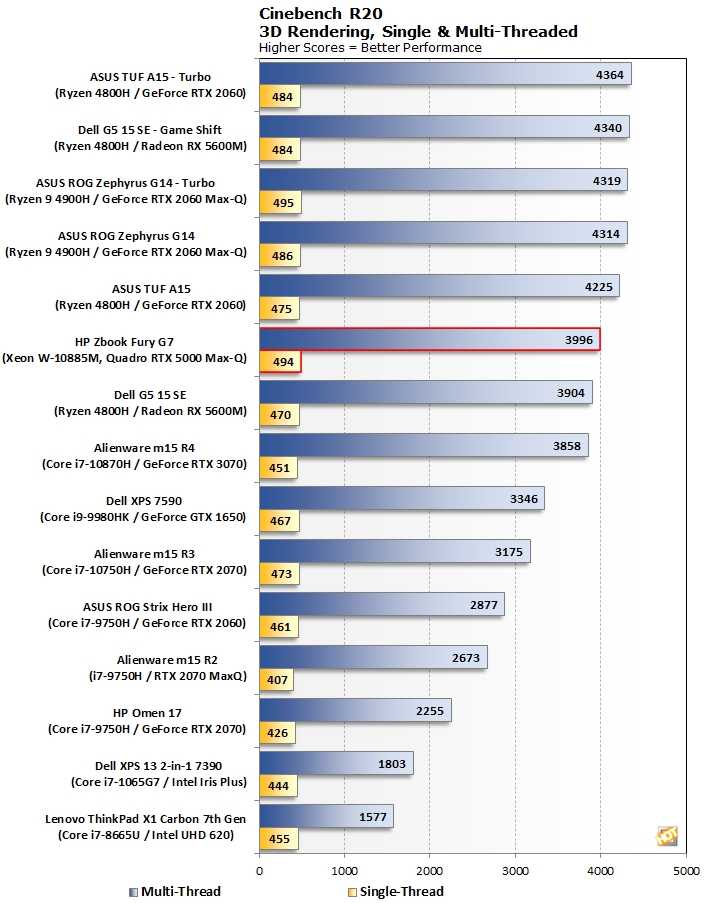 Cinebench has typically favored AMD processors, but the ZBook comes awfully close to all of the high-powered Ryzen systems on the list. It turned in some of the best scores of any Intel notebook we've tested in this benchmark, and trails the top spots held by the Dell G5 15 SE and ASUS TUF Gaming A15 by a mere 6.5%. 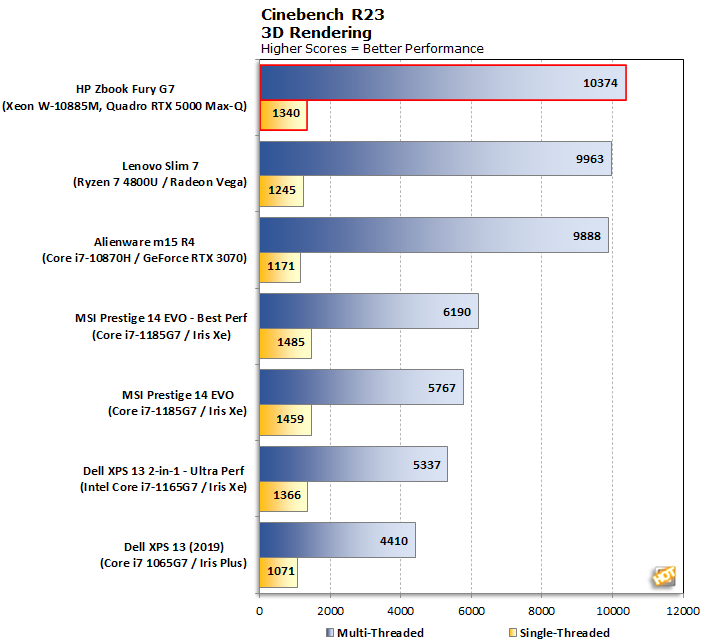 We don't have as many results in Cinebench R23 since it's a new benchmark, but the ZBook Fury 15 G7 is the fastest of them all. It's about 5% faster than the Alienware m15 R4 and its 10th generation Core i7-10870H. The Lenovo IdeaPad Slim 7 has just a 15 W Ryzen 7 4800U, but is only around 4% behind the ZBook's 45 Watt Xeon. It looks like the newer Cinebench will be favorable for AMD systems, too. 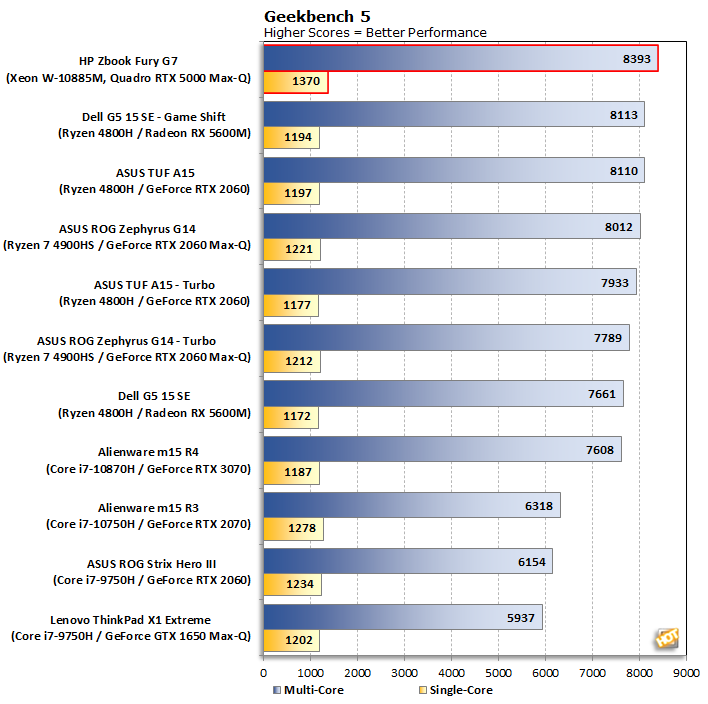 Geekbench is another synthetic test where some AMD systems perform particularly well, but the ZBook Fury 15 G7 wins out in the end. Not only does it post the fastest multi-threaded score, but its single threaded performance was top of our chart. That may change when Tiger Lake-H CPUs start to make their way into retail notebooks, though. 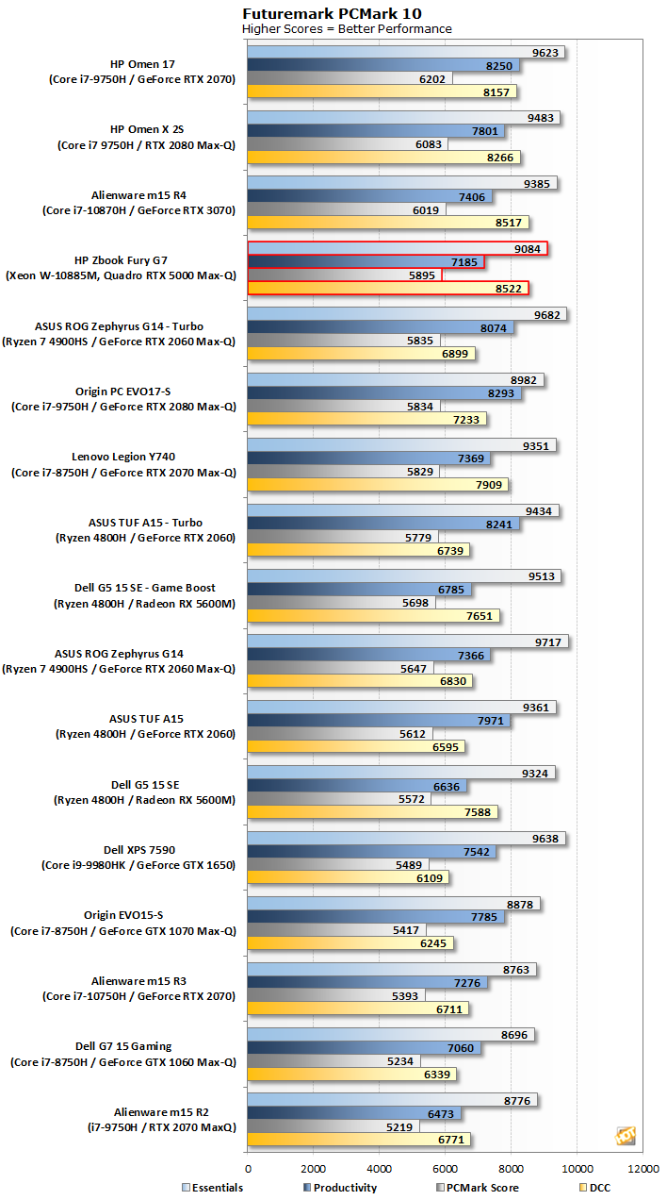 The productivity tests in PCMark are solid across the board. Digital Content Creation scores don't seem to shift at all with the ISV certification that the HP notebook's Quadro RTX 5000 carries, though. Typically that doesn't help much with video and photo editing loads, which make up a big majority of that test. Overall, it's a very zippy system that ranks up near the top once again.

One place that the ZBook Fury 15 G7's Quadro RTX 5000 and its certified drivers will come in handy is 3D modeling. The ZBook is aimed directly at engineers who need to work from home, an office, or even a factory floor. SPECviewperf includes a variety of tests based on real-world modeling software. These tests produce significantly different framerates, so we've sorted them into three groups to make the results a bit easier to read. Please note the legends at the bottom of each chart, which designate the application or viewset used. 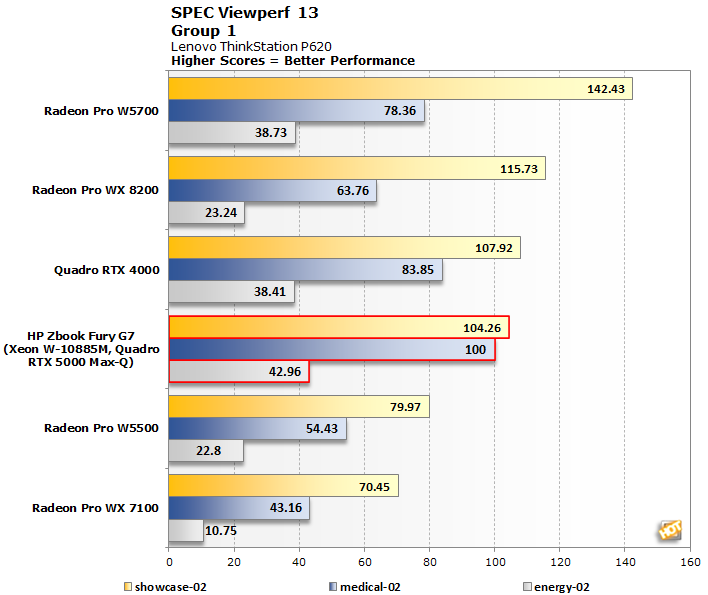 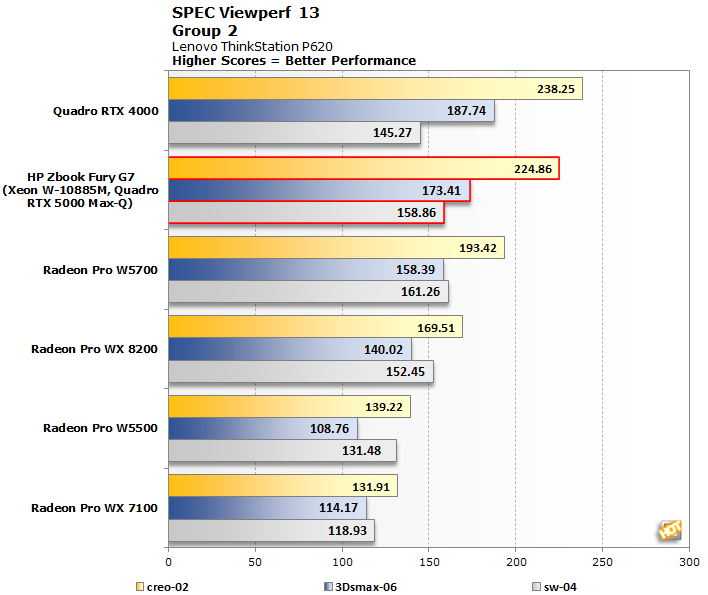 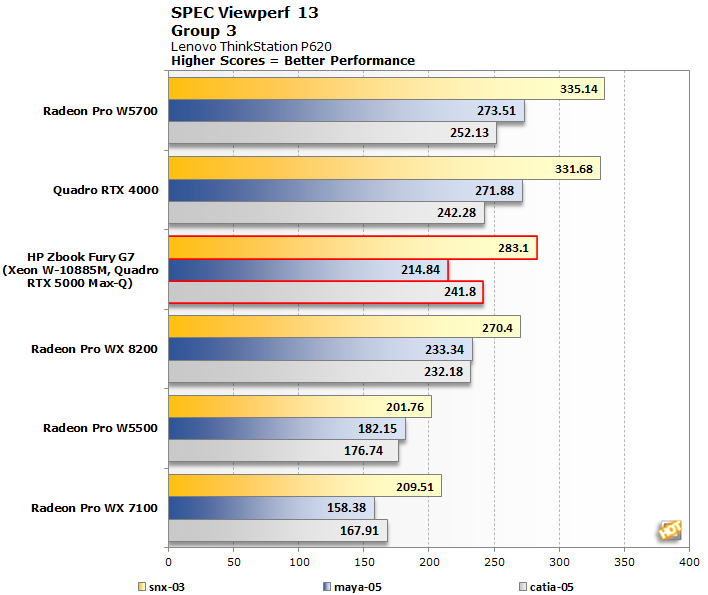 It hardly seems fair to pit the ZBook Fury 15 G7 against a bunch of desktop hardware configurations with high thermal and power limits, but that's exactly what we've done so you can at least have a frame of reference. However, rather than fold under the pressure, the ZBook turns in some of the best frame rates across a wide variety of these tests.

The Quadro RTX 4000 on our chart has more in common with a desktop GeForce RTX 2070 SUPER than anything else, so it's got fewer CUDA cores but a higher clock speed. The ZBook's Quadro RTX 5000 Max-Q was up to the challenge, besting the desktop system in three of the nine tests.

AMD's Radeon Pro W5700 was a pretty even challenger for the ZBook as well. HP's notebook beat out the Radeon in four of the nine tests. That's a whole lot of real-time rendering power packed away in a small notebook.

UL’s well-known 3DMark benchmark suite features tests that target different types of computing devices. We selected the Time Spy, Fire Strike Extreme, and Port Royal tests for a synthetic look at this machine's potential gaming performance in DirectX 12 and DirectX 11 scenarios. We also have a fair amount of comparison data these tests. 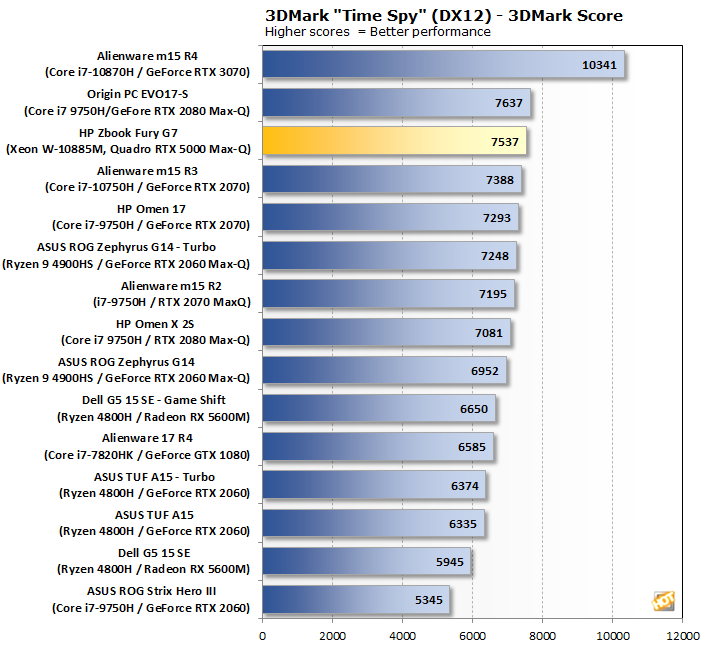 This result is right in line with the various GeForce RTX 2070 and 2080 notebooks on our chart. The focus on professional graphics doesn't mean that users can't fire up a game in their off hours. The 16 GB of VRAM doesn't seem to provide any sort of advantage in 3DMark's tortuous Time Spy test, however. 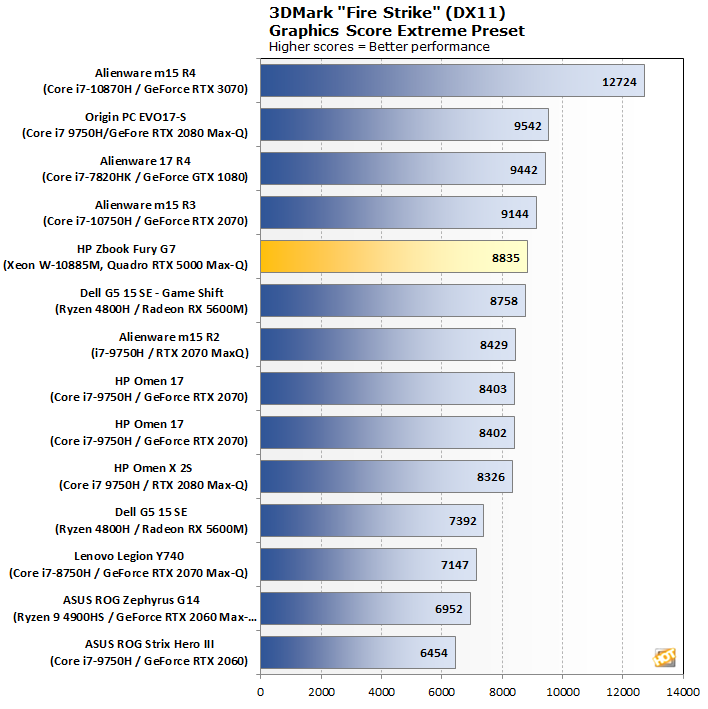 Once again, the ZBook Fury 15 G7 slots right in line with all of the other notebooks with Turing-based graphics cards right where it's expected. Ampere is a gaming force that can't be stopped, so the Alienware m15 R4 wins this test very handily, but the HP isn't disadvantaged by its professional-focused graphics.

Lastly, the Port Royal test uses DirectX Ray Tracing (DXR) to illuminate a scene. So far, the only notebook GPUs that can power this benchmark come from the NVIDIA camp, since AMD's Big Navi graphics core architecture hasn't made it into a mobile platform yet. 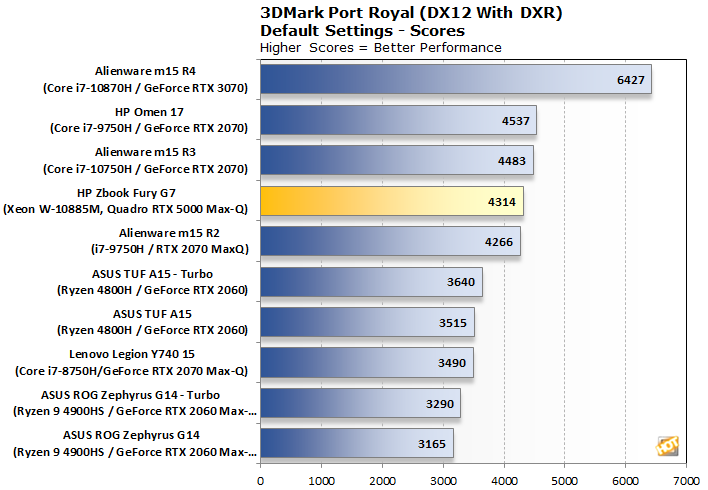 The story doesn't really change here. Of the Turing-based notebooks, the ZBook came in third behind a pair of GeForce RTX 2070 notebooks that were not constrained by the Max-Q designation. The difference in power budgets only accounted for around a 2% difference, though. The ZBook hung tough. 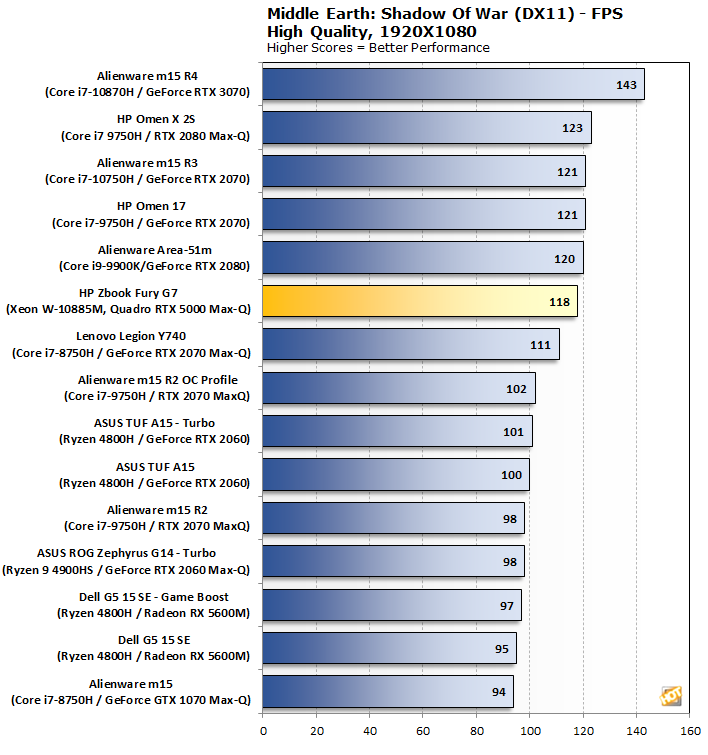 Shadow of War poses no problem for the ZBook at 1080p with High quality. The notebook was essentially tied for second place, since only around 2.5% separates second place from sixth. The Alienware m15 R4 took the cake once more, though. 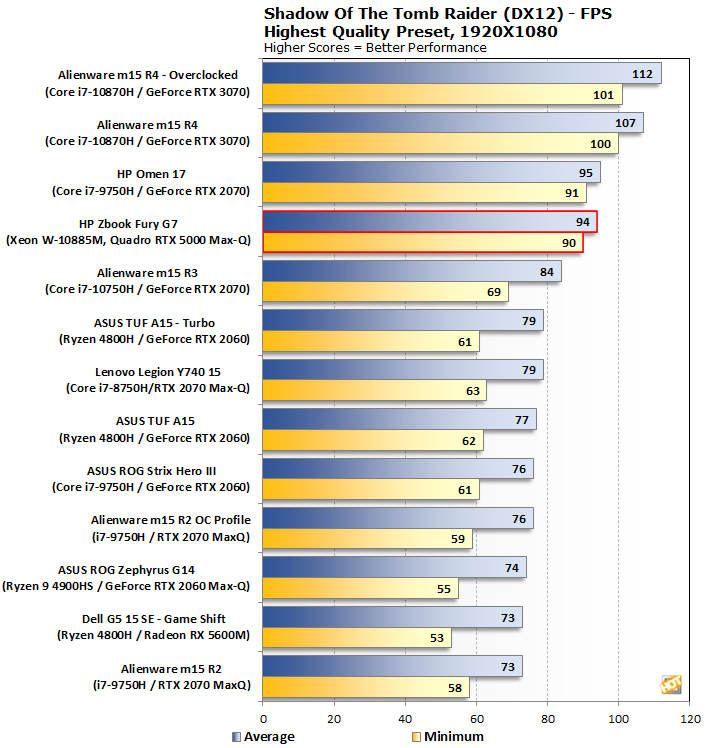 Much like the games before, Shadow of The Tomb Raider at 1080p was a cinch of the ZBook Fury 15 G7. A minimum framerate of 90 fps is perfectly smooth, especially considering the ZBook's 60 Hz display.

Our custom video playback battery test times how long each notebook can play back video at the display's native resolution. Windows 10's Focus Assist was enabled to block all notifications and the screen was calibrated to as close to 115 lux as possible according to our light meter. On the battery slider built into Windows, we selected the middle option of the three available, which is labeled "Better Performance" and we stuck to the default power profile HP included on the system. 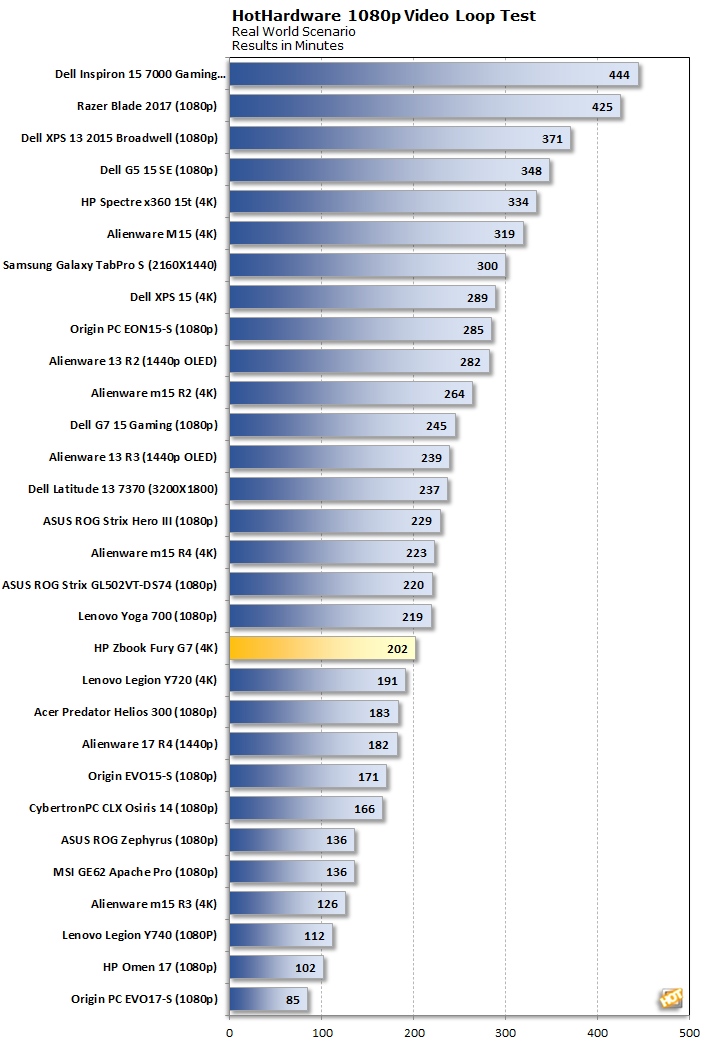 Considering its powerful internal hardware and the 4K display that the ZBook Fury 15 G7 has to draw all those pixels on, battery life wasn't that bad. 202 minutes isn't anything to write home about, but the recently-reviewed Alienware m15 G4 didn't last much longer. This seems to be around average for notebooks with 4K displays and powerful discrete graphics cards, so the relatively short battery life isn't really a knock against the HP.

The HP ZBook Fury 15 G7 is a very impressive notebook that turned in consistently great performance. Now let's move on to investigate its innards with a little tear-down action, and see if we can figure out what makes it tick.