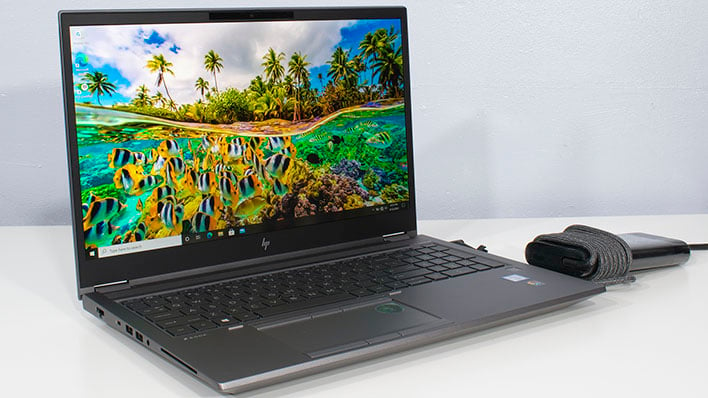 Normally when people think of "business-class laptops" they envision moderately powerful systems that handle office productivity tasks and web browsing duties with plenty of performance to keep employees productive, but without frivolous cost-adding features. On the flip side, workstations conjure images of tremendously powerful beasts with all the right kinds of excess: plenty of cores, tons of memory, and high-end professional graphics with certified drivers for powerful, mission-critical applications. Somewhere in the middle is the mobile workstation market, where hybrid laptops like the HP ZBook Fury 15 G7 we'll be showing you here today, try to straddle the line between the two extremes with varying degrees of success.

HP is no stranger to the mobile workstation market. Its ZBook lineup of notebooks blends the two needs -- mobility and power -- into a variety of notebook form factors. A while back we looked at the ZBook 14u G6, which pushed the envelope in terms of an ultraportable notebook, and boasted ISV certification in tons of apps with a decent amount of horsepower too. This time, we're looking at the bigger ZBook Fury 15 G7. As its name implies, this mobile workstation has a whole lot of horsepower packed into a 15.6" notebook chassis without being nearly as large as most gaming laptops with comparable specs.

Let's take a moment examine the HP ZBook Fury 15 G7's individual parts and specs, before we dive in a little deeper... 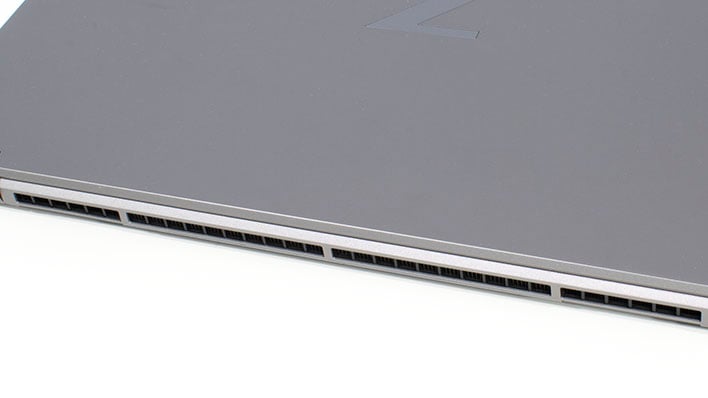 The ZBook Fury 15 G7 on display today has top-of-the-line specs across the board. It starts with an Intel Xeon W-10885M processor. This CPU has eight cores and 16 hardware threads via Hyper Threading, with 16 MB of cache, running at a base clock of 2.4 GHz and a maximum boost clock of 5.3 GHz. Despite all this speed, the Xeon gets by with a 45 Watt TDP. The closest analog in the consumer realm is the Core i9-10980HK, and it's the fastest mobile workstation CPU that Intel currently makes. 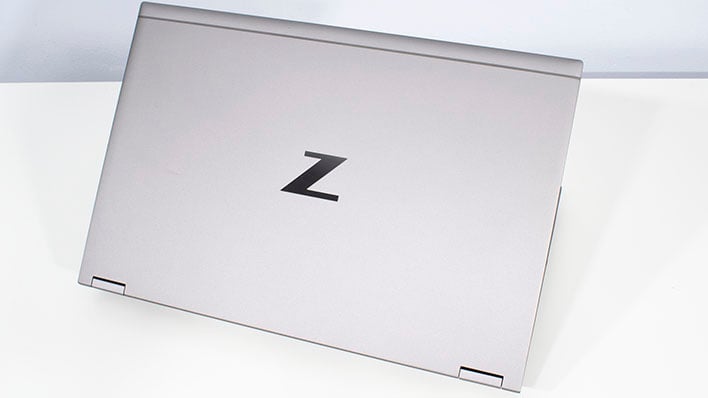 Graphics duties are handled by an NVIDIA Quadro RTX 5000 GPU with NVIDIA's Max-Q tech. Prior to Ampere when NVIDIA made sweeping changes, there could be multiple Max-Q configurations without any way of knowing which one you'd get. In this case, HP says the Quadro RTX 5000 has an 80 W TGP. This particular model has 3,072 CUDA cores running at a base speed of 600 MHz and a boost clock of 1,350 MHz. It has a whopping 16 GB of GDDR6 memory good for 384 GB per second of memory bandwidth. Despite its lower power envelope than non-Max-Q options, the Quadro in this machine should still be pretty speedy.

For memory, the ZBook Fury 15 G7 has 32 GB of DDR4-2667 spread across a quartet of 8 GB SO-DIMMs, two under the keyboard and two more under the bottom cover. A total of 128 GB is possible with 32 GB SO-DIMMs. Our review unit has just one of its three M.2 slots filled with a 1 TB NVMe PCI Express 3.0 SSD. We should also note, that everything in this system is user-serviceable, as you might expect from a mobile workstation. We'll get into the teardown later on, but upgrades are fairly simple despite the relatively svelte dimensions.

Networking comes in all shapes and sizes, and the ZBook can handle them all. Gigabit Ethernet comes from an Intel I219-LM network controller routed into a folding RJ-45 connector on the side of the machine. Intel's AX201 Wi-Fi 6 module handles 802.11ax (2 x 2 MIMO antenna) and Bluetooth 5.0. Cellular users aren't left in the lurch, either, as an optional WWAN card is available at an extra cost. 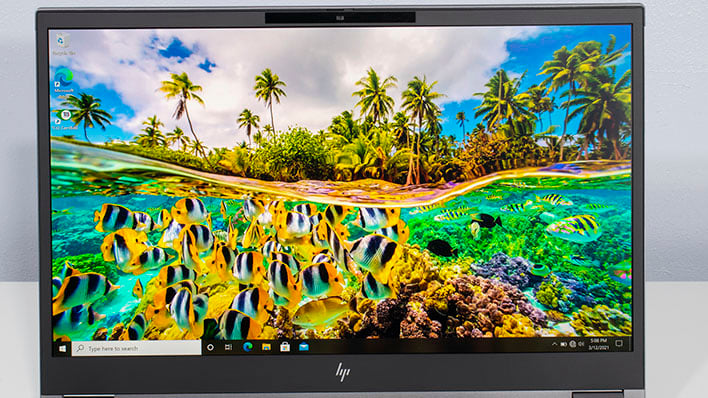 HP keeps the weight relatively low by outfitting the ZBook with an aluminum and magnesium chassis, and the metal body definitely gives the system a premium feel. Keeping with the premium theme is the size of the bezels. The top and side bezels are all more than 50% smaller than the last generation, which helps keep the footprint small while maintaining a 15.6" display size. Inside those bezels is a gorgeous 4K UHD panel with an anti-reflective coating. The display supports 100% of the DCI-P3 color space and has a maximum brightness of 600 nits. Colors really pop on this display, which comes from the factory calibrated for any number of professional media creation tools.

Right above the display sits a 720p HD webcam with infrared sensors. This works great for Windows Hello facial recognition, which we used throughout the review period. As a webcam on conference calls, the image quality is only average. As more employees continue to work from home, and probably will keep on doing so long after COVID-19, we'd like to see 1080p webcams and an emphasis on image quality in low-light situations. That's not a special negative on HP here, since almost all integrated webcams are universally challenged by low light. On either side of the display sits a pair of noise-canceling microphones, which worked great in Skype calls. The callers on the other end never had any problem understanding what we were saying. 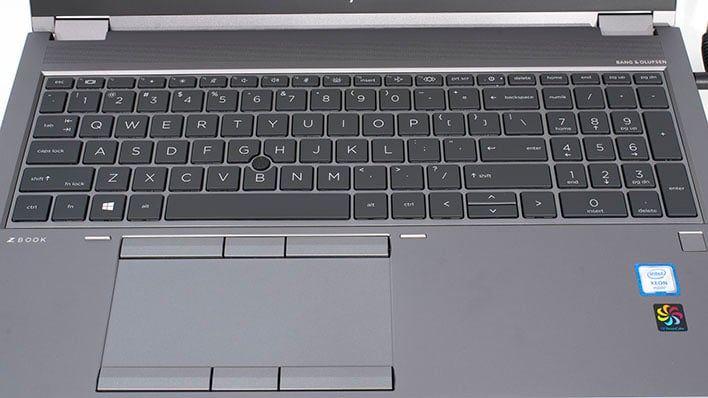 The hinges supporting the display open a full 180 degrees. The system doesn't fold all the way around for any soft of tablet mode, since we'd never expect to hand-hold a laptop with such powerful hardware. We do like the full range of motion though, so that it will fit onto just about any laptop stand at any angle. Right below the hinges sits a pair of Bang & Olufsen full-range speakers. The bass, as seems to always be the case with notebooks, is mostly absent. They're great for conference calls, YouTube videos, and most speech, however. We could hear people on the other end of our Skype calls and Microsoft Teams meetings without any trouble.

HP's ZBook Fury 15 keyboard is really quite nice. The unavoidable truth about notebook keyboards with tenkey layouts to the side is that typing always results in being a little off-center, but the keys are responsive and we never had problems with dropped or missed keypresses. HP's Dual Point mouse nubbin took a little finesse to control accurately at first, but we got used to it pretty quickly. While we think Lenovo's Touch Point is the gold standard in this kind of mouse navigation, HP does a very nice job here.

Below that sits the integrated trackpad, which has has plenty of space, especially horizontally, to intuitively move the mouse pointer. We really like that the trackpad has buttons on the top and bottom, as it allows us to mouse with our right hand and left-click with the left thumb, or use it traditionally with one hand. This feature hasn't found its way into too many notebooks, but we appreciate it here. The fingerprint reader, which also works with Windows Hello, is on the far right below the tenkey enter button. It worked well both for registering fingers and logging into Windows. 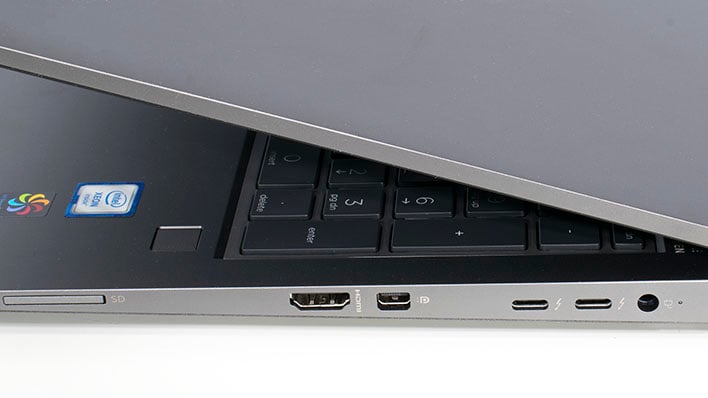 HP did not skimp on the port array with the ZBook Fury 15 G7. On the right, we have a barrel connector for the AC adapter right next to two Thunderbolt 3 ports. The rightmost port and the barrel work together with HP's array of Thunderbolt 3 docks. We're big believers in docks not only for convenience, but also for increased productivity. To the left of those are two display outputs: Mini DisplayPort 1.4 and HDMI 2.0b. Lastly, HP included a full-sized SD card reader in the ZBook complete with a protective insert. Push in on the insert and it'll pop out, and an SD card can click into place.

One thing to be aware of here is that the system ships with a 200 Watt charger, but some of HP's docks only come with 150 W adapters. We have an older HP Thunderbolt Dock G2, and when we plugged in the ZBook Fury 15 G7, Windows told us that it was not providing enough power for full performance. That was no joke, as performance dropped around 15-20% while using our older dock with a 150 W power supply. This dock was not provided by HP, and we tested it just because we happen to have it and an older ZBook 15 G5 on hand. We ended up having to power the system separately with its own AC adapter and let the dock's adapter power just itself. HP told us that it recommends the 200 W version of its current Thunderbolt dock for this notebook, and we'd recommend picking one up to anybody who needs one. 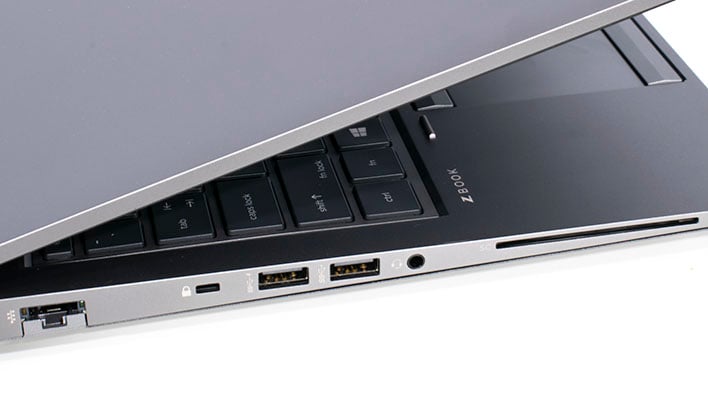 Around the left side, we have the fold-down Gigabit Ethernet port at the rear, which we used throughout the review period when we had the system at a desk. Two USB 3.1 Gen 2 Type-A ports provide up to 10 Gigabits per second of throughput. Those connectors sit between a Kengsington-style lock port and a combination headset jack that handles both stereo audio and microphone input on a single jack, like many smartphones. Lastly, a Smart Card reader handles a third method of password-free (or password-augmented) authentication. Since the vents are on the rear and the display opens 180 degrees, there are no ports on the backside of the Fury.

On the software front, HP includes a pretty lightweight set of apps. Our review unit came with Windows 10 20H2 update already installed out of the box. Aside from drivers, HP loaded very little software onto the ZBook Fury 15 G7. A couple of the more noteworthy additions are HP's Client Security app, which handles encryption and key backup duties, and SoftPaq Download Manager, which provides tools for downloading updates for a wide variety of HP machines and distributing them over a network.

The most useful utility for an end user is HP Support Assistant, which displays information about the system and provides diagnostic and updating tools. Oddly, the tool identified our ZBook as an x360 14" convertible notebook, but showed the correct hardware configuration. Since our review unit was an early sample, it's possible that the utility just didn't know what the system was yet. Still, it dutifully downloaded updated drivers for our hardware and installed them all without incident.

Now that we've explored the ZBook Fury 15 G7, let's take it for a spin and check out performance.