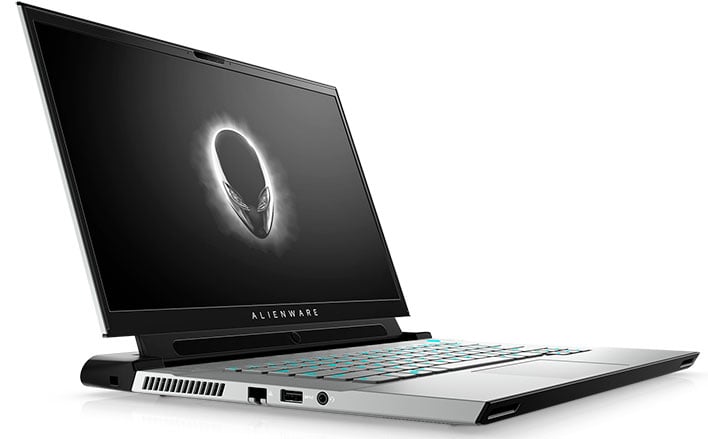 Alienware's m15 series of notebooks has typically impressed us, thanks to the family's performance and unique good looks in a relatively svelte mobile package. Performance always hinges upon having the latest platform hardware, so perhaps it's no surprise that the laptop we're looking at today has one of NVIDIA's latest mobile Ampere GPUs on board from its new GeForce RTX 30 family. When NVIDIA pulled the lid off mobile Ampere, it made some pretty big promises. Performance across the Ampere lineup that spans from RTX 3060 to 3080 should be faster than NVIDIA's previous mobile powerhouse, the GeForce RTX 2080 SUPER. That bodes well for the middle child in NVIDIA's new GeForce RTX 30 Mobile lineup, the RTX 3070, which finds itself on board the Alienware m15 R4 we have in for review today.

That's not to say that this latest gaming laptop from Alienware is a one-trick pony. In fact, the newest m15 packs more tricks on board than perhaps Houdini himself. Yes, it starts with the notebook version of NVIDIA's powerful GeForce RTX 3070, but there's a gorgeous OLED display, Tobii eye tracking, Intel's current top-end 10th gen CPU, and other top-end tech under the hood. All that gaming goodness is packed inside a relatively portable notebook with plenty of customizable RGB LED-infused eye candy, and an intricate ventilation system to whisk hot air away from the components that generate it. But before we get too far ahead of ourselves, here's a quick look at the spec rundown of the 4th coming of Alienware's m15 gaming laptop... 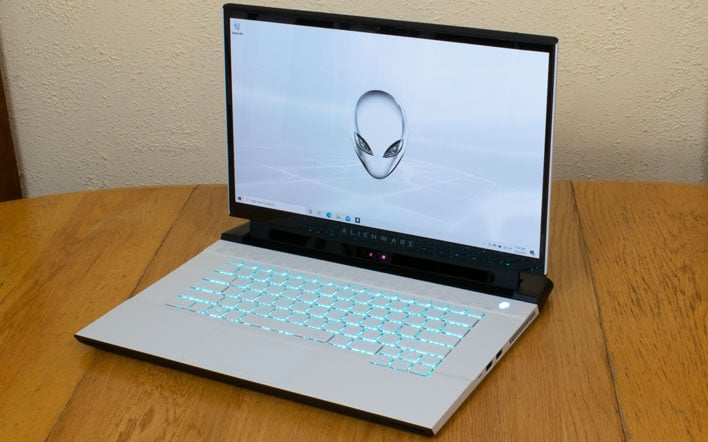 Normally we'd begin by considering about the CPU, storage and memory subsystem at the core of many notebooks, but let's be honest. We want to know all we can find out about this mobile GeForce RTX 3070 GPU first. NVIDIA's own control panel tells us about as much as we can learn with publicly-available tools. In this case, the GeForce RTX 3070 has 5,120 CUDA cores and a graphics boost clock of 1,620MHz. There's also 8 GB of 14 GT/s GDDR6 VRAM on a 256-bit memory bus, which is good for 448 GB per second of bandwidth.

It's not surprising to learn that some of these specs are toned down a bit from the desktop version of the GeForce RTX 3070, which has 15% more CUDA cores. The mobile variant's top boost speed is only down 105 MHz from the 1,725 MHz boost clock of the desktop card. All told that's an 18% dip in maximum performance from 20.3 shading TFLOPS for the GeForce RTX 3070 Founder's Edition, to 16.65 TFLOPS for this mobile version. Regardless, there are still a pretty nice GPU specs to squeeze into a laptop platform, where power consumption will almost assuredly have to be less than the maximum 220 W of the desktop version. Those who need a bit more horsepower still have the GeForce RTX 3080 as well, at the top end of NVIDIA's mobile lineup.

The rest of the hardware in the m15 R4 isn't all that different from the previous iteration m15 R3 which we reviewed back in October. Intel's 10th generation CPUs are still the order of the day, though our review sample this time out has an eight-core, 16-thread Core i7-10870H with a 2.2 GHz base speed and a maximum single-core boost of 5 GHz. There's also the Core i9-10980HK available as an upgrade. We don't expect that our CPU will spend very much time at its base clock rate, and so this notebook should have plenty of gaming performance under the hood. Much like the m15 R3 before it, the R4 has Alienware's 6-phase CPU voltage regulation circuitry and a 12-stage regulator for the GPU. 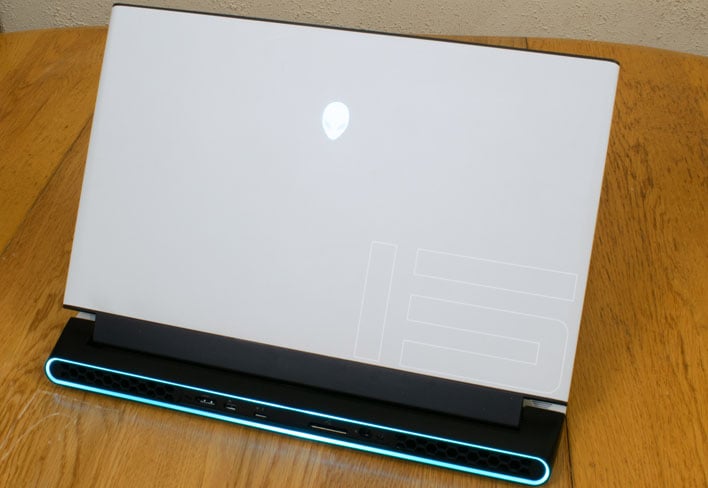 Alienware gave the CPU 16 GB of DDR4-2933 memory to work with. Additional configurations offer between 8 and 32 GB of RAM. That RAM is soldered, however, so buyers should be sure to order all they think they'll need now and down the road. For primary storage, a pair of 512 GB M.2 NVMe solid state drives in a RAID 0 configuration come along for the ride, as well. The m15 comes in configurations with up to three SSDs. Single-drive models top out at 2 TB of onboard storage, where the dual-drive systems can double that to 4 TB with striping for the best performance. Lastly, RAID 0 Plus configurations can optionally add a 512 GB SSD on top of the other two, maxing out at 4.5 TB combined.

Networking did get a refresh this time around. Now the 2.5 Gigabit Ethernet controller is a Killer E3100X. Wi-Fi is provided by a Killer AX1650i, which has a 2x2 MIMO antenna configuration and Bluetooth 5.1. We're also weirdly excited about the 1080p full-HD webcam, as it feels like laptops have been stuck with subpar 720p cameras for far too long.

On the outside, not a whole lot has changed about the m15 since the last version. Alienware still offers the Dark Side of the Moon and Lunar Light finishes, which are polycarbonate bodies with Alienware's trademark mysterious alien-style design with lots of hexagons and lighting. The rear vents have RGB lights that outline them like twin exhaust pipes on a tricked-out car, and the keyboard has per-zone RGB lighting. Lastly, the Alienware logo-style badge on the lid and power button both have RGB bling. 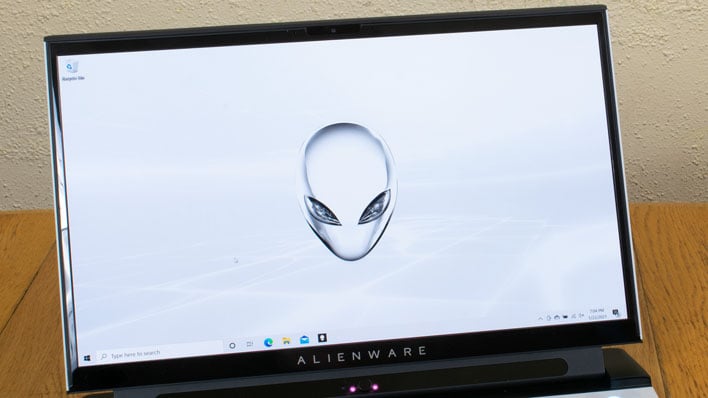 Once you open the m15 R4 the fast hardware under the hood is even more accentuated, at least on our review model, by a gorgeous 15.6-inch 3,840x2,160 OLED display panel. The panel's brightness maxes out at 500 nits, which is plenty bright for indoor or outdoor use, in most cases. Nobody's going to burn their retinas on HDR content like a 1,000-nit display would, but this panel's contrast ratio is striking, thanks to its inky OLED saturation and pop. Speaking of which, the OLED panel's deep contrast ratio also meets the HDR500 specifications, so high dynamic range content will be rendered with accuracy and vibrance.

Right below the display sits the Alienware m15's Tobii eye tracker. The red lights you see in the photo above are just proof that the infrared lights are present to detect faces, even in the dark. To the naked eye they're totally invisible, but the camera sees all. As we've seen in previous reviews, Alienware put these facial tracking features to good use. Whenever we move our head to look away from the display, the panel would dim to save power after a couple of seconds. However, once we reverted our attention to the display, it would automatically brighten back up to where we had it. This had to be disabled for battery tests and photography, however.

Above the display rests the 1080p HD webcam and noise-canceling microphone array. These worked great for Skype calls, as we could be seen and heard well. This system also has some powerful speakers for a notebook, and had no problem filling the room with sound. Alienware says the m15 R4 has discrete woofers and tweeters for its stereo audio output, and it makes a big difference. Nobody will mistake the internal speakers for a pair of externals bookshelf boxes, but there's definitely more oomph to these speakers than smaller, less endowed laptops can muster. 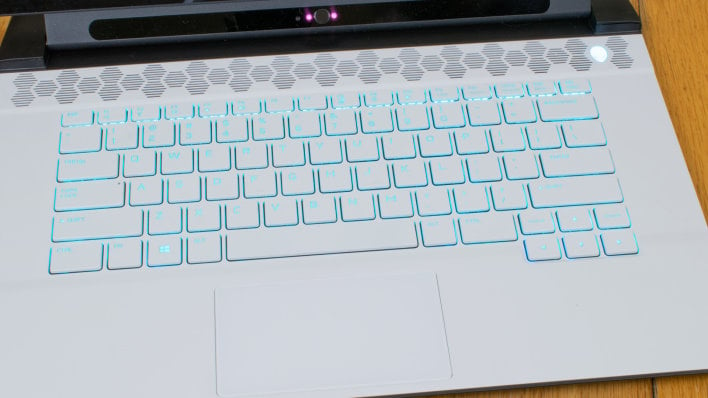 Below the display sits Alienware's big, m Series keyboard with four RGB lighting zones. This feels like basically the same keyboard that was on the previous model. We had no problem typing on this machine, and produced this entire review using it. There's ample key travel (1.7 mm according to Alienware's specifications) which felt great as we typed. It also worked well for gaming, as the keys are approximately the same size as most full-sized keyboards on which we've typed. Many 15" notebooks try to squeeze in room for a numpad to the right of the traditional QWERTY keyboard but that's not the case here, and we think the system is better for it. When a number pad is present, it shifts the user to the left but few (if any?) laptops don't shift the display alongside it.

The smallish but totally usable trackpad doesn't seem updated this time around, either. It's responsive to the touch and has left-click and right-click integrated as well. We think that most gamers will opt to use a traditional mouse when gaming, so the size of the trackpad isn't a big deal, and it handles virtually any productivity task with ease and Windows 10 multi-gesture support. 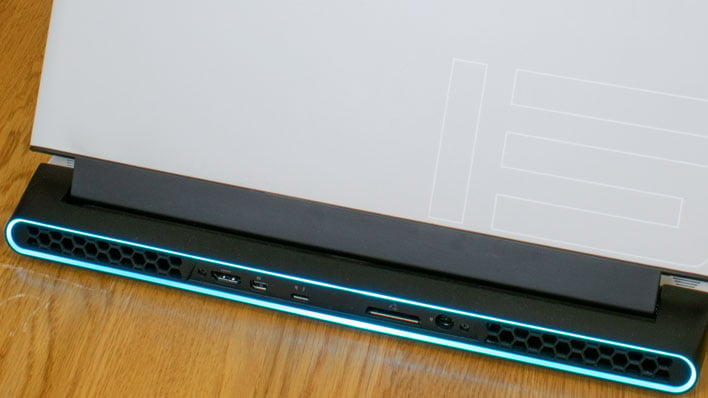 Alienware was generous with the port selection array on this gaming laptop. On the left, we find a 2.5 Gigabit Ethernet port, a single USB 3.2 Gen 1 (5 Gbps) Type-A port and a headphone jack. On the right we find two more 5 Gbps USB ports and a micro SD card reader. Both sides are also outfitted with additional vents, so along with the big vents on the rear, warm air can escape the system in a multitude of ways. Speaking of the rear of the m15 R4, Alienware included one HDMI 2.1 port, one Mini DisplayPort 1.4, and one Thunderbolt 3 Type-C connector. We'd be remiss if we didn't mention the expansion slot for Alienware's Graphics Amplifier next to the barrel power jack. The power adapter can provide up to 240 W of power to simultaneously charge the battery while gaming. 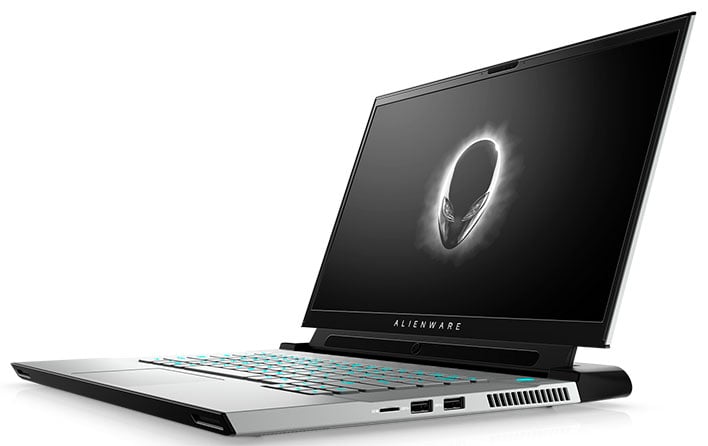 For software, Alienware includes its Command Center utility, which allows firing up one of the included overclocking profiles. They take effect after a reboot, and we had no problem using the more aggressive of the two for playing games. We've included results for our gaming benchmarks in our testing. Disconnecting the m15 R4 from power will revert to the default power state, so there's no overclocking while using the battery. 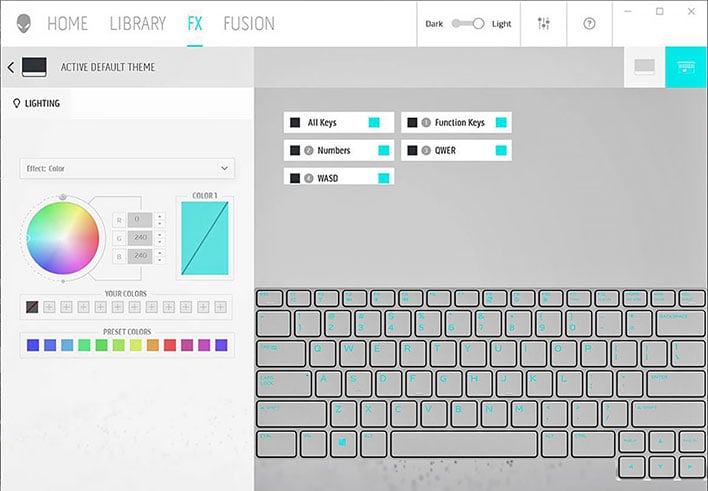 Alienware Command Center can also control the multiple lighting zones. The rear, lid logo, and keyboard can all be controlled independently. They keyboard has four zones organized left to right, so they can have a rotating color wave in addition to any single solid color. Finally, the power button can be colored, but seems to always light up amber in color when the power adapter is disconnected and the system is running on battery reserves. Lastly, Command Center can also act as a game library manager, similar to the way GeForce Experience does, by detecting games it knows to look for and displaying them on a single menu. You can then customize power and fan profiles, and even lighting, to kick into gear when a specific game from your library is launched.

Finally, Alienware was very good about not loading the system down with additional bloat, so there's really not much else to cover here. Just the way we like it. Now that we've gotten a tour of the system, it's time to see how this GeForce RTX 30-series equipped beastie performs...