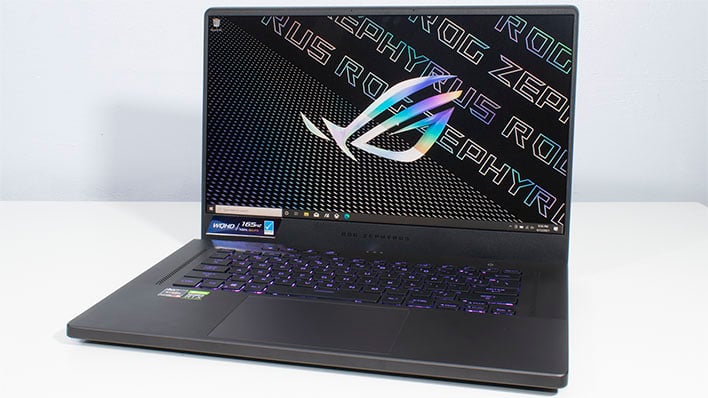 At CES 2020, ASUS unveiled the ROG Zephyrus G14, which as its name implies is a 14" gaming notebook. It was our first experience with Zen 2-based APUs from AMD, particularly the 35-Watt Ryzen 9 4900HS. That processor had eight cores with AMD's best CPU architecture at the time, and despite the thin design and tight thermal budget of the G14, the performance of both the Ryzen APU and the included GeForce RTX 2060 with Max-Q really knocked our socks off. The system was relatively light, possessed performance that far exceeded its weight class, and was quite eye-catching with its unique, perforated lid design.

Fast-forward a year, and we're looking at the updated ROG Zephyrus G15, launched at this year's virtual CES. This notebook has a more traditional (for a gaming notebook) 15.6" display. Once again, ASUS's premium gaming notebook gives us our first glimpse at what AMD's new APUs can do, too, in the form of the 35-Watt Ryzen 9 5900HS. While none of the AMD-powered gaming notebooks we looked at last year had top-end graphics options, the Zephyrus G15 has NVIDIA's best mobile Ampere GPUs available. We're looking at a model with a GeForce RTX 3070 here, but a faster option with an RTX 3080 is readily available as well.

As we mentioned previously, the silicon heart of the ROG Zephyrus G15 is AMD's Zen 3-based Ryzen 9 5900HS. Unlike desktop Ryzen 9 CPUs, this processor has the same eight cores and 16 hardware threads as the Ryzen 7 family, but with boosted clock speeds. In this case, the base clock is a modest 3 GHz while the maximum boost speed is 4.6 GHz. For a CPU living in a 35-Watt TDP, that's pretty impressive. AMD also gave the Ryzen 9 5900HS 4 MB of L2 cache and 16 MB of L3 cache. While we wouldn't use it for hardcore gaming, this processor has built-in AMD Radeon Graphics based on the same Vega architecture as the 4000 series with 8 CUs.

For heavy graphical duties, the Zephyrus G15 relies on NVIDIA's GeForce RTX 3070 GPU with 8 GB of GDDR6 VRAM. Our particular unit, which has the catchy model number GA503QR, uses an Ampere GPU with an 80 W Thermal Graphics Power (TGP) budget. As we discussed when NVIDIA announced mobile Ampere GPUs, the company makes several versions of each graphics solution with different TGPs. 80 Watts is the most power-frugal option used in this ASUS notebook. In comparison, the Alienware m15 R4 we reviewed in February had a 125 W TGP. We expect a bit of a performance difference between the two configurations, but we don't figure this notebook will be slow by any means. The lower thermal levels of the CPU and GPU means the charger only has to push 200 W to power the system and charged he battery simultaneously, which keeps the brick size manageable. 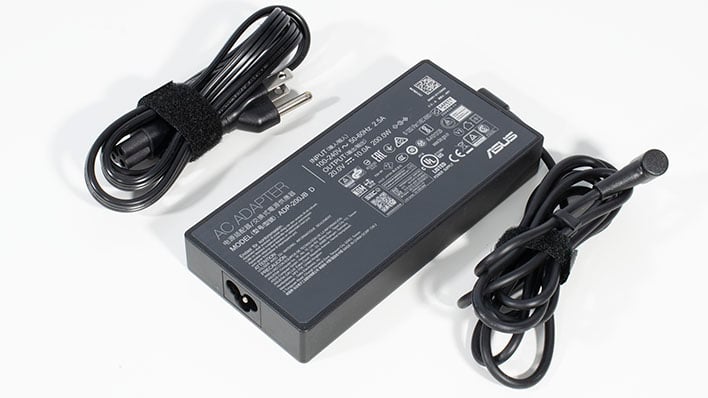 ASUS generously gave the ROG Zephyrus G15 16 GB of DDR4-3200 main system memory and a 1 TB NVMe SSD for primary storage. The great news here is that, unlike the Alienware machine mentioned above, memory is user-upgradeable...mostly. As we'll see in the teardown section, only one 8 GB DIMM is accessible, as the remaining 8 GB are soldered to the motherboard. That means with a 16 GB or 32 GB SO-DIMM, we could get 24 or 40 GB of system memory, but that's where it stops. Fortunately, 16 GB will probably be just fine for quite a while. The SSD is a typical M.2 2280 drive, and there's a second M.2 slot for a pair of drives.

For networking, ASUS gave the Zephyrus G15 a full complement of connectivity options. Gigabit Ethernet is provided by a Realtek controller, and a full-sized port sits on the left side of the machine. A user-replaceable 802.11ax and Bluetooth 5.0 combination card has Intel's AX200 controller. Just about the only connectivity this system lacks compared to an Intel model is Thunderbolt, but that's exceedingly rare with AMD systems. 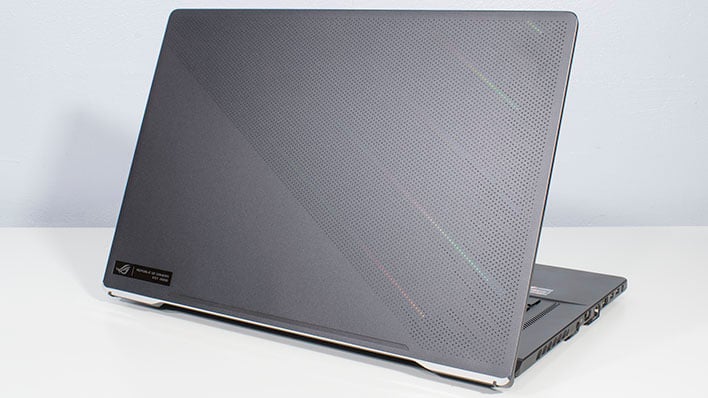 On the outside, the ROG Zephyrus G15 is quite a looker in its Eclipse Gray finish. The system has a magnesium-aluminum alloy lid and palm rest to keep the chassis lightweight and durable. The CNC-milled dot matrix design on the lid has returned, but rather than LEDs, this iteration has a "prasmatic film" underneath the perforation, which reflects all different colors of light depending on how the lighting is angled. For those who like white notebooks, the Zephyrus G15 is also available in Moonlight White.

ASUS constructed the Zephyrus G15's hinge with a lip -- which ASUS dubs Ergolift -- that pulls the back of the body up off of a desk or table. This makes room for ample airflow in through the bottom-facing intake vents, and angles the keyboard slightly for typing. The hinge rotates a full 180 degrees, so whether the system is on a desk or on a stand, angling the display is pretty simple. While the hinge required too much torque to easily open one-handed, it definitely stays in place once we positioned the lid, and closing one-handed is a piece of cake. 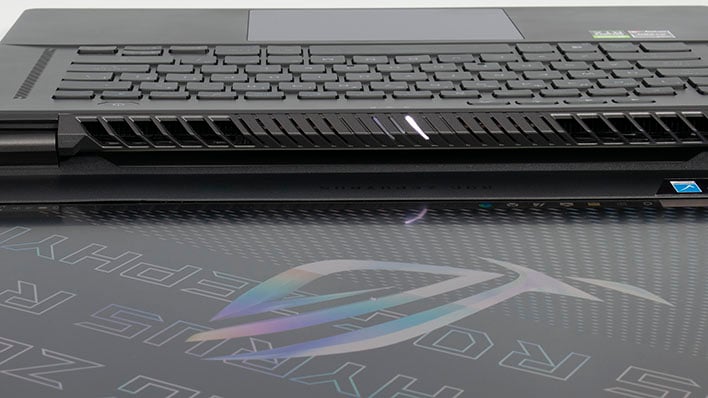 The hinge hides another feature as well: the ventilation system. On some gaming notebooks, most notably the ASUS TUF Gaming A15, the primary exhaust vent is on one side or the other, which blows directly on a mousing hand and makes gaming somewhat uncomfortable. The extra footprint of the Alienware M15 allowed rear ventilation, but to keep the system thinner, ASUS went with hidden vents that blow warm air up the front of the display. This worked well because the exhaust is never blocked, and it doesn't blow air onto our hands.

The display is somewhat unique among notebooks, which typically favor either Full-HD 1080p or Ultra-HD 2160p (4K) displays. Instead, ASUS split the difference and gave the Zephyrus a 16:9 1440p display with a refresh rate of a whopping 165 Hz. High-refresh displays are somewhat of a waste at 4K since no mobile GPU available today will ever drive them to the max, but with 1440p, that becomes much more feasible. A scaled-down version of the system also has a 144 Hz 1080p display option. 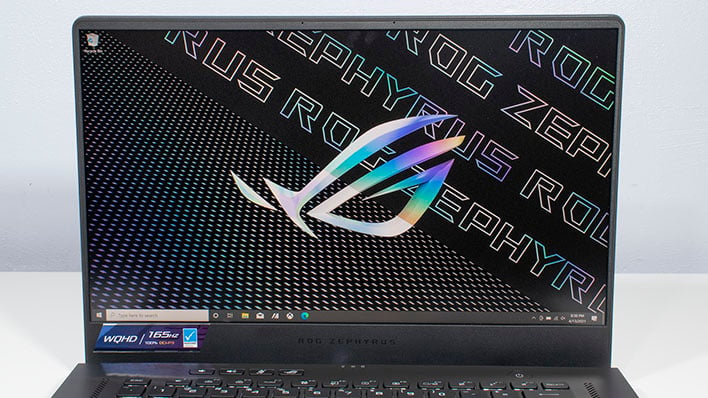 The display is an "IPS-level" panel that covers 100% of the DCI-P3 color space with a maximum brightness of 300 nits. That's not exactly bright, but indoors it's sufficient most of the time. Where we had it set up, there was a lamp over my shoulder, and the lamp was annoying enough to force me to turn it off. A bit more brightness is definitely necessary. We measured just 305 lux maximum brightness with our light meter, and the aforementioned 1080p display maxes out at 250.

On the other hand, the lack of high-dynamic range support is not a particularly noteworthy absence. HDR video and games really look their best when there's local dimming, something that most HDR notebooks lack in the first place. On the other hand, an OLED panel like optional model on the Alienware m15 would have been great, but it seems unfeasible in this price range currently.

At the top of the display sits a pair of noise-canceling microphones and a conspicuously absent webcam, something that was true of last year's models including the Zephyrus G14 we reviewed. Those who want to multi-task with this system while video conferencing or streaming will need to look at external options. Biometric authentication fans can still get their fix though, with a fingerprint reader built into the power button. 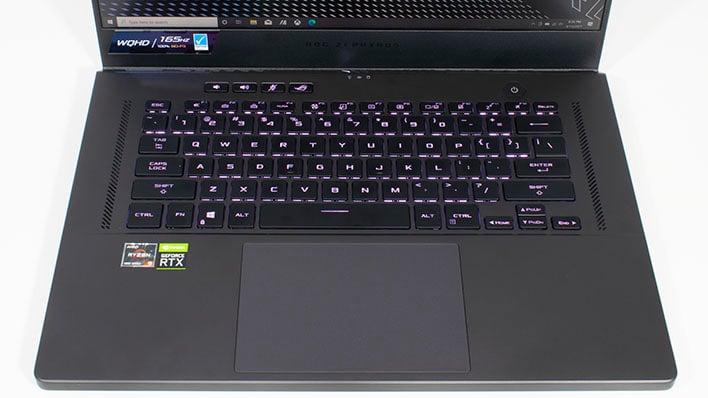 The aforementioned mics worked well with the stereo speakers for voice chats, though the speaker system stole the show. Laptops typically have anemic sound quality and a total lack of bass. That's not the case with the ROG Zephyrus G15, however. ASUS gave the system a six-way speaker system including two downward-firing woofers and a pair of tweeters. The woofers might be better described as midrange drivers because the system doesn't really crank up the bass, but the sound was surprisingly full overall. There's also Dolby Atmos support on board to get the most out of movies. While external speakers will likely take sound to the next level, it's rare for a laptop to sound this good, and ASUS deserves some props here.

The keyboard and trackpad fill their jobs nicely. The ROG Zephyrus G15 has an RGB backlit keyboard with a single lighting zone. ASUS includes its Armoury Crate software that allows Aura Sync to keep the keyboard and any RGB peripherals in sync. Typing on the keyboard is pleasant, as there's adequate travel to feel like typing and we experienced no bounciness or dropped keystrokes.

The palm rest deck has a honeycomb reinforcement pattern underneath to prevent flexing. The dedicated F-key row is appreciated, and the tenkey-less design prevents users from sitting off center while typing, unlike machines with a dedicated numpad. Below the keyboard is a very generous track pad with integrated buttons. We'd never use it for gaming, but for Windows navigation on the go, it does a nice job and has plenty of space for gestures and mouse tracking. 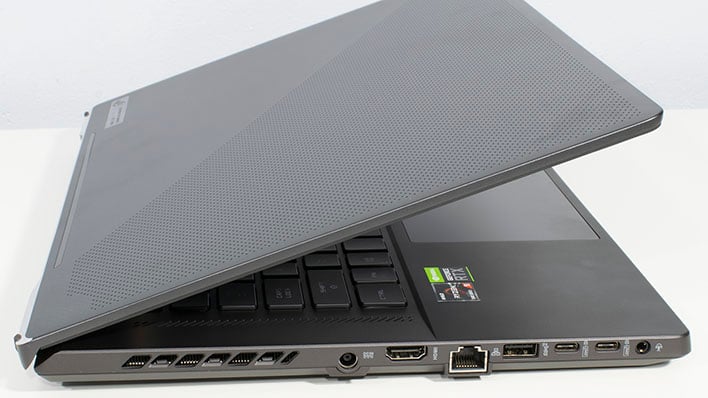 ASUS provided plenty of ports for connecting peripherals too. On the left side, we have a combination headphone jack, two 10-Gbps USB-C ports, a 10-Gbps USB-A port, Gigabit Ethernet, HDMI 2.0b and the barrel connector for the AC adapter. Around the right, we have another 10-Gbps USB-A port, micro SD card reader, and a Kensington style lock port. This system was definitely built with righties in mind, since most of the ports are on the left. There are also vents on either side, but we felt very little air moving through them. It seems the vast majority of the ventilation happens between the hinges.

ASUS bundled the ROG Zephyrus G15 with Windows 10 Home with the 20H2 update already installed. Very little additional software was installed, which we appreciate. Besides the typical driver utilities and control panels, the only extra apps were MyASUS and Armoury Crate. Between the two apps, just about everything a user needs to control every aspect of the system is covered. 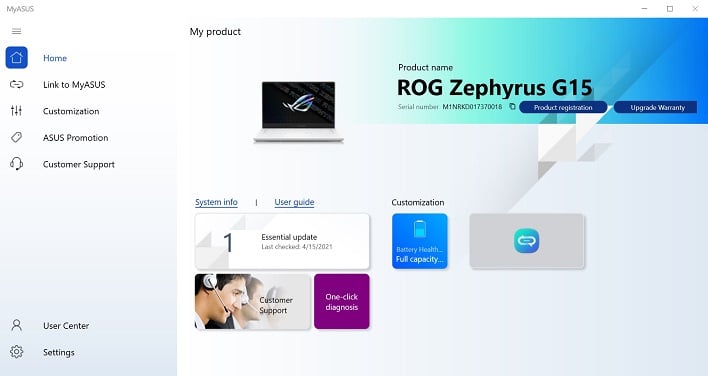 MyASUS has some very useful diagnostic and system information pages. Users can monitor battery health and system configuration from the Home tab. On the Link to MyASUS tab, users can connect to the MyASUS smartphone app to transfer files, share the screen, and make phone calls and text messages. The functionality is something of a repeat of Microsoft's Your Phone app for Windows 10, but it's contained within the larger ASUS support app. There's also a handy link to ASUS support pages with diagnostic tests to run. 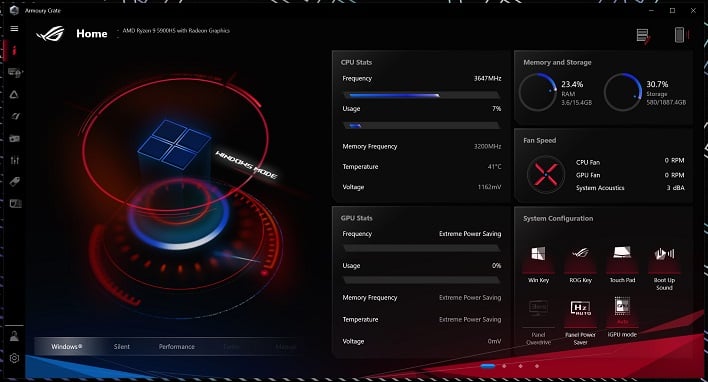 The Armoury Crate app is a mainstay of ASUS's ROG and TUF lineup of PCs and desktop motherboards. Here we can more closely monitor system temperatures and cooling, as well as make changes to the RGB lighting in the keyboard. The keyboard has just a single zone, but the ASUS AURA Sync section will link up other RGB peripherals like external mice, keyboards, and headsets. ASUS also has a plugin for Corsair's iCUE software. This allows the Corsair software to control the ASUS RGB lighting as an alternate way to keep devices in sync.

Armoury Crate also has controls for power profiles, including Performance and Turbo modes. The Turbo mode makes the PC run flat-out as fast as possible and cranks the cooling and noise under load. Still, when the Zephyrus was idle, Turbo mode still let the fans spin down to make for a nicer environment when the cooling wasn't necessary. Performance mode is a small step below that. In our tests on the next page, we ran everything minus battery tests using the default Windows power profile and Turbo. According to a couple quick tests, Performance mode fell somewhere in the middle, so the extra data points were unnecessary.

Now that we've met the system, let's spin up some benchmarks and see how it performs.
NEXT PAGE