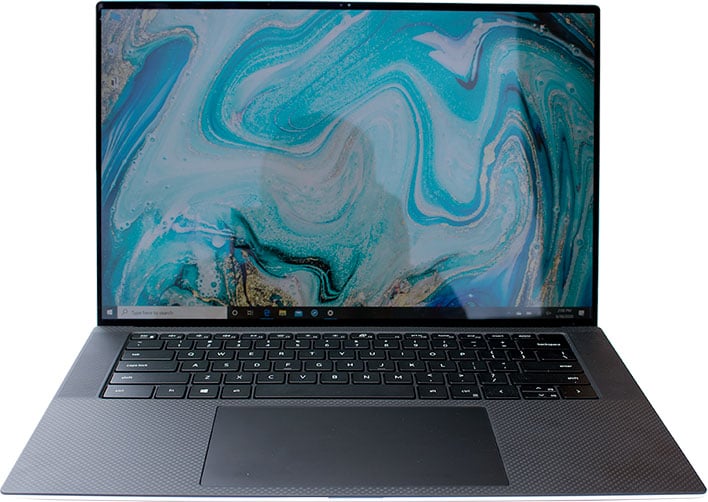 Remember when Coca-Cola reformulated its popular soft drink in the mid 1980s? The so-called New Coke formula barely lasted a few months before it failed and the original was brought back. The company already had a good thing on its hands and it was a valuable real-world lesson in not trying to reinvent the wheel when the one you have spins well. On the surface, soft drinks and laptops like Dell's new for 2020 XPS 15 9500 don't have anything in common, so why bring it up?

Generally speaking, this concept also applies to what Dell has done with its XPS 15 series of laptops, or not done, as the case might be. The past two iterations of the Dell XPS 15 (2019) and XPS 15 (2018) models earned our coveted Editor's Choice award, and rather than try to reinvent one of the best 15-inch laptops on the market, the new for 2020 Dell XPS 15 9500 offers a host of subtle refinements rather than a brand new formula. And guess what? The result is that Dell's strategy has once again paid off.
Interestingly enough, Dell tells us the XPS 15 9500 for mid-2020 actually is a complete redesign and the "first major overhaul" of the laptop in around five years, though you would not know it at a passing glance. This machine looks very similar to past XPS 15 systems, until you peer closer to see the changes Dell did make, like its thinner InfinityEdge display bezel (now on all four sides) and its much larger touchpad. 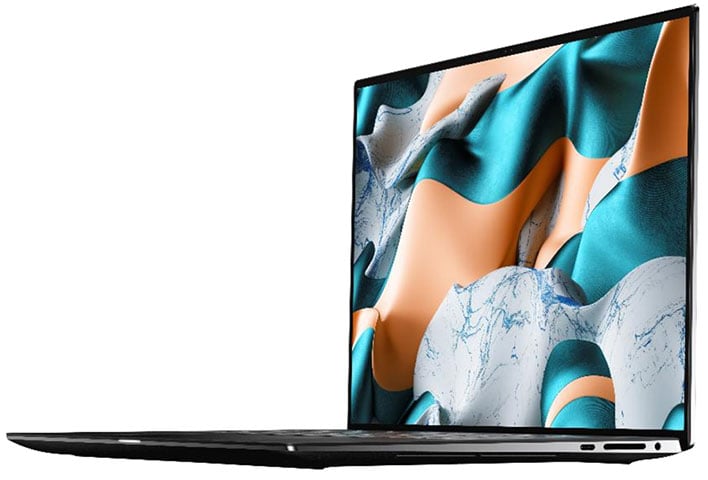 Dell's intent was to deliver a revamped laptop with a design language that is simultaneously "fresh and familiar." That is no easy task, and while the XPS 15 9500 certainly offers a lot of familiarity, there are a bunch of subtle upgrades that do offer a freshened experience. Unlike the ill-fated New Coke formula, the new XPS 15 9500 is overall a much-improved laptop.
We will get to all of the changes Dell made in short order, but first let's have a look at the pertinent specifications...

Like the XPS 17 9700 we recently reviewed, the new XPS 15 reshuffles the processor options with Intel's 10th generation Comet Lake-H chips. Specifically, the configuration we tested sports a Core i7-10875H processor. It is an 8-core/16-thread slice of silicon with a 2.3GHz base clock, 5.1GHz max boost clock, and 16MB of Intel Smart Cache (shared L3 cache, essentially), with a 45W TDP. It is the highest end Comet Lake-H chip Dell currently offers in the XPS 15 line, though the company tells us that "Core i9 configurations are still yet to come."

As is, there is plenty of pep in this mobile chip's step. And to prevent it from tripping over itself, Dell equipped this configuration with 16GB of DDR4-2933 memory, a speedy 512GB SK Hynix PC611 NVMe solid state drive, and a respectable GeForce GTX 1650 Ti GPU with 4GB of dedicated GDDR6 video memory. The upgrade to discrete graphics is an optional choice, and represented in the model Dell sent us for evaluation.

What we end up with is a well-rounded setup that should excel at a variety of tasks, from productivity and content creation chores, to playing video games. 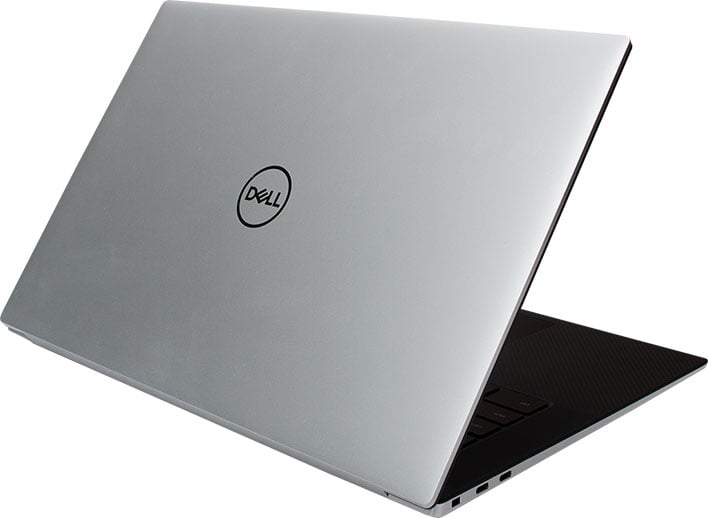 This all comes wrapped in a premium chassis crafted from a block of CNC machined aluminum. It is largely unchanged in appearance from past iterations of the XPS 15, with the silver color scheme and reflective Dell logo that is laser cut from a sheet of steel and embedded into the center of the lid. It also looks and feels durable, and according to Dell, the double-anodized edges of the laptop resist scratches when plugging in peripherals.
The latest XPS 15 is not using an identical chassis, though. It is 8 percent thinner than before, measuring 0.71 (H) x 13.57 (W) x 9.06 (D) inches, and weighs 4.5 pounds with an 86 watt-hour battery tucked inside (the non-touch models with a smaller 56 watt-hour battery are even lighter, starting at 4 pounds).
Cooling is always a concern when it comes thin and light laptops, particularly more powerful ones. To that end, Dell says the slimmer design does not come at the expense of thermals. The XPS 15 packs a pair of cooling fans that work in conjunction with heatpipes to keep temps at bay. Hot air gets directed up a "slight ramp" and out hidden exhaust vents in the hinge. Additionally, Dell continues to use Gore thermal insulation, which is essentially a high tech liner with excellent conductivity properties to mask off parts of the skin, so they don't get hot to the touch.

For better or worse, the latest generation XPS 15 bids farewell to Type-A USB ports. This appears to be a casualty of the slimmer design, with Dell embracing Thunderbolt 3 and Type-C connectors. On the left side, the XPS 15 offers up two Thunderbolt 3 ports with power delivery and DisplayPort functionality, and a wedge-shaped lock slot.

Over on the right side, the XPS 15 serves up a USB 3.1 Type-C port (also with power delivery and DisplayPort mojo), a 3.5mm headphone/microphone combo jack, and a full-size SD card reader. It is a similar port arrangement as found the XPS 17 9700, except the larger laptop adds a second Thunderbolt 3 port on the right side.

The included charger plugs into the USB-C port, leaving users with a pair of Thunderbolt 3 ports when tethered to the wall. But it is the absence of any Type-A connectors that might frustrate some users. As a consolation prize, Dell includes a USB Type-C to USB Type-A dongle for plugging in the vast array of existing USB Type-A devices that are on the market. The dongle also sports an HDMI 2.0 port. 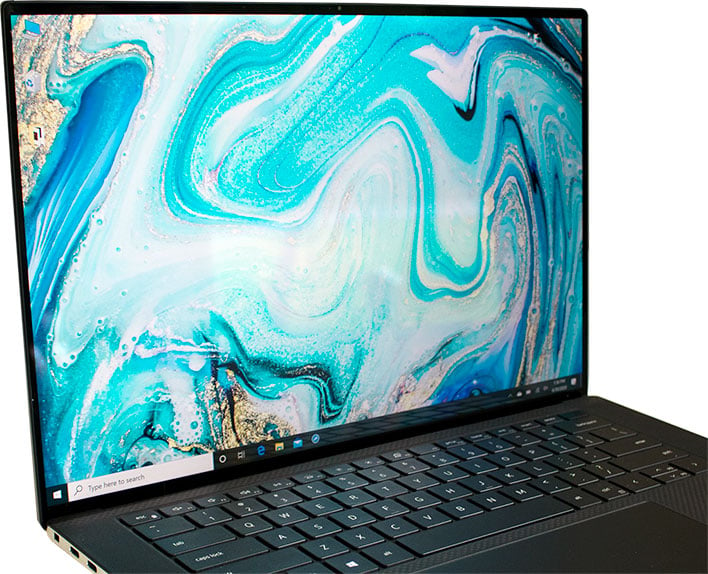 We have consistently been impressed with the InfinityEdge displays Dell uses on its XPS family, and this one is the best iteration yet. New for this year's model is the extension into a four-sided InfinityEdge design, which Dell accomplished by narrowing the bezel on the bottom of the display. The 15.6-inch screen is now effectively 5 percent bigger than the previous version, and has a 92.9 percent screen-to-body ratio.
The model we tested sports a 4K Ultra HD+ (3840x2400) resolution with a 16:10 aspect ratio. It offers 100 percent and 94 percent coverage of the Adobe RGB and DCI-P3 color spaces, respectively, and produces dazzling images from virtually any angle.
It also gets plenty bright—we measured between 550-570 lux at full blast from our light meter—and is DisplayHDR 400 certified. Simply put, everything looks crisp and overall fantastic on the XPS 15, including movies, photographs, and games.
One thing that is not unchanged from last year's model is the placement of the webcam, and this time that is a good thing. Prior to last year's model, the webcam sat at the bottom of the display. That was great if you wanted to show off your neatly trimmed nose hairs, otherwise it was an unfortunate placement. This year's model keeps the webcam at the top where it belongs.
Dell's approach to this year's refresh was on "highlighting the essential." Normally we would roll our eyes at that kind of marketing speak, but in this case, it guided the subtle changes that collectively add up to an appreciably better experience than last year's model.
Part of that entails the added screen real estate and, according to Dell, a new hinge design that makes it easier to open (we never struggled to pop open last year's model). But it also extends to the keyboard and touchpad. 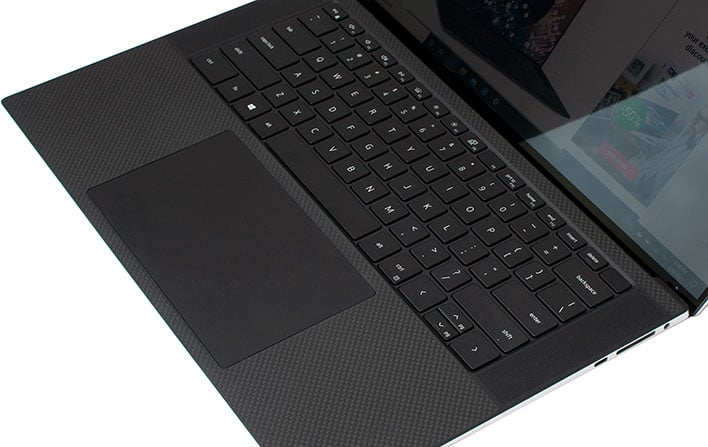 The keyboard features larger keycaps than last year's model, so it feels less cramped when furiously pounding keys to win an Internet argument. This is most notable in regards to the arrow keys. They are still squished into the lower-right corner, but are much bigger than the 2019 XPS 15, particularly the left and right arrows.
Of course, this is still a laptop keyboard we are talking about, and we have yet to experience one that matches the experience of typing on a fill-sized deck. But as far as these things go, it is relatively comfortable with adequate spacing and decent key action. It also offers a white LED backlight. 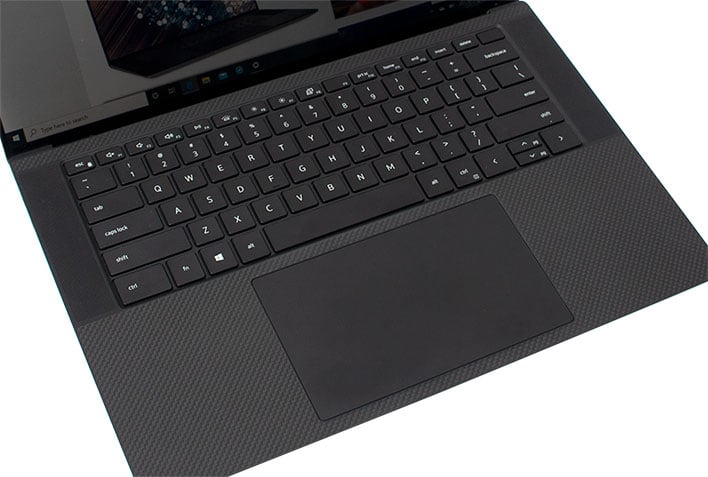 Underneath they keyboard sits a mammoth touchpad. This is the biggest touchpad we have ever seen (save for the XPS 17 9700, which received the same upgrade), and we hope this is a trend that catches on. It is one of those things that, once experienced, makes it difficult to go back to something smaller.
Collectively, the added screen real estate, bigger keycaps, and more spacious touchpad do indeed elevate the essential experiences of using a laptop. So, job well done to Dell with regards to focusing on those areas.
A set of top firing speakers flank the keyboard. It is a quad-speaker design with two 2.5W woofers and two 1.5W tweeters, optionally powered by Waves Nx 3D audio (you have to fire up the app to enable it). The sound quality is surprisingly good, for a laptop. You're not going to get any noise complaints from the neighbors about too much thumping bass, but the audio elevates out of tinny territory and is fuller bodied that what a lot of laptops produce. 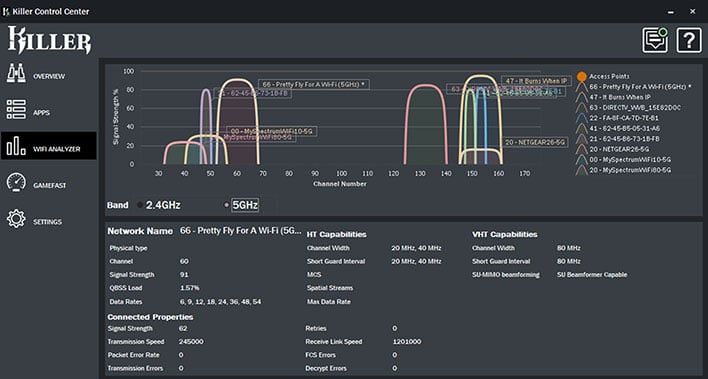 The XPS 15 comes with some notable software bits. One of them is the Killer Command Center that accompanies the Killer AX1650 Wi-Fi 6 adapter that's installed inside. This is the same adapter and software that we reviewed last October, and found to be excellent. It is a welcome inclusion in this year's XPS 15 (the adapter is based on Intel hardware).

Dell also includes a range of utilities, most notably the SupportAssitant software. This makes it easy to fetch various driver and software updates related to the specific XPS 15 build you have configured, including firmware upgrades, as well as troubleshoot issues and perform mundane Windows maintenance tasks. Most of these functions can all be accomplished independently of the utility, but it serves as a convenient front-end, saving users form having to jump around Windows.
Now let's dive into the performance benchmarks...