Shopping for a gaming laptop might soon require a bit more research than it normally would, because of a supposed change in how NVIDIA intends to promote its third-generation Max-Q technology. The latest Max-Q standard is a big part of Ampere's push into mobile territory, which NVIDIA announced at CES 2021 last week, but upcoming laptops might not explicitly discern between a full-power or lower-power GPU.
The way things work now is that OEMs typically attach a Max-Q label on laptops with lower power GPUs inside. These are mostly intended for thin and light designs. A full power GPU tucked inside a slim gaming laptop can run hotter than what the system's cooling potential allows. In light of this, NVIDIA came up with Max-Q, a term it borrowed from the aerospace sector. 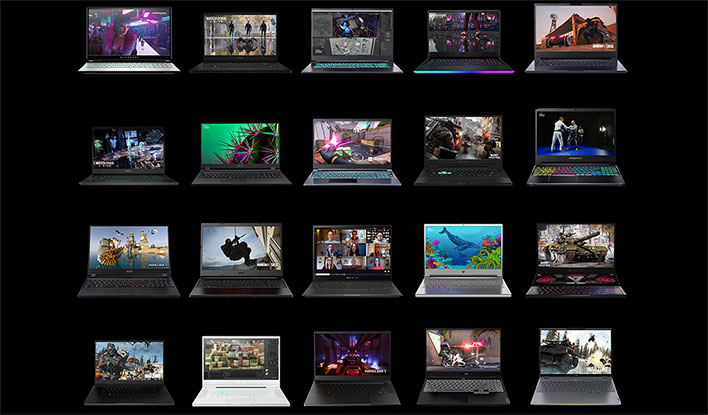 "Max-Q designs take into consideration chips, drivers, thermal and electrical components, control system and more. The results are sleek, quiet laptops that are a fraction of the size of earlier generation devices while packing much greater performance than similarly sized laptops without Max-Q," NVIDIA explained a couple of years ago.
Now NVIDIA has introduced three main Ampere GPUs for laptops, those being the GeForce RTX 2080, GeForce RTX 3070, and GeForce RTX 3060. We understood NVIDIA would be making them available in both full-power (Max-P) and lower power (Max-Q) variants, but according to NotebookCheck, the Max-Q branding will not accompany upcoming laptops.
"No longer will NVIDIA or OEMs mention whether a particular Ampere Mobile GPU is Max-Q or Max-P. In fact, NVIDIA tells us that every Ampere Mobile part can offer third-gen Max-Q features," the site says.

If true, this could make things a bit confusing when shopping for a gaming laptop. Looking at NVIDIA's chart above, each Ampere Mobile GPU supports a wide range of power targets and associated clockspeeds. For example, a GeForce RTX 3080 running at full throttle has a TDP of 150W or even higher, with a 1,710MHz base clock. However, it can also be configured down to 80W with a 1,245MHz boost clock, in what would be a Max-Q configuration.
Compare that low end configuration to a GeForce RTX 3060 Mobile GPU running unencumbered at 115W and with a 1,703MHz boost clock. It is conceivable that it could actually outperform a GeForce RTX 3080 Mobile configured at 80W, in some workloads, despite the discrepancy in CUDA cores and other hardware. And if not, it should at least narrow the gap quite a bit (again, in some workloads).
Max-Q is not just about TDPs and default clocks, though. There are other features at play, and according to the report, OEMs can choose to implement or not implement certain ones at their own discretion, such as Dynamic Boost 2.0. This is something else that could make things more confusing when comparing laptop models.
For the time being, we are treating this as a rumor, as we have not been informed that the Max-Q branding is on the way out. That said, we have reached out to NVIDIA for comment and will update this article when/if we hear back.

Updated 1/21/2021 @ 5:04pm ET
An NVIDIA spokesperson has responded back to our inquiries about Max-Q/Max-P on laptops with GeForce RTX 30 Series Mobile GPUs with the following statement:

Max-Q branding is not going away.

When we originally introduced Max-Q back in 2017, the brand was initially used in GPU naming since Max-Q referred to the GPU TGP only.

Today, 3rd Generation Max-Q is broader, and is a holistic set of platform technologies and design approach to building powerful and thin laptops.

In addition, to be more transparent about a laptop’s exact capabilities, RTX 30 Series laptops now show more information than ever, listing exact TGP, clocks and features supported. You will find this in the control panel which now reports maximum power (TGP+Boost), and support for key features including Dynamic Boost 2, WhisperMode 2, Advanced Optimus, and others, all of which fall under the Max-Q umbrella.

We strongly encourage OEMs to list clocks and other technologies a laptop supports, including Advanced Optimus, Dynamic Boost 2, and more. Ultimately, like all laptop features and specs, it is up to the OEM to market what their particular laptop configuration supports.