Doom Eternal Ray Tracing Tested: The Devil's In The Details 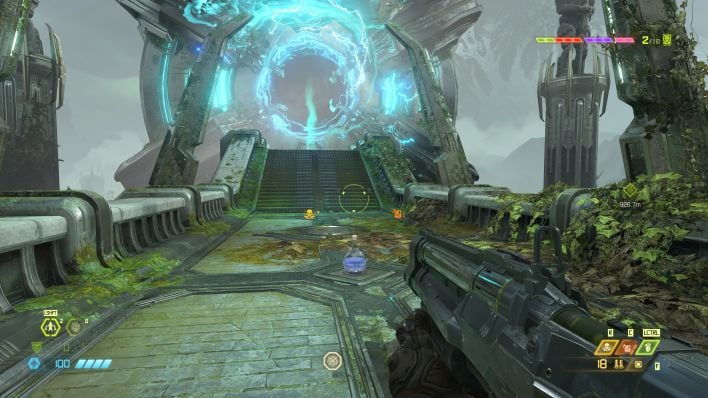 In the spring, Id Software and Bethesda announced that they would bring real-time ray tracing and NVIDIA DLSS 2.0 to the Vulkan-powered Doom Eternal. When we reviewed thsi latest Doom title, we found that it was already pretty stunning graphically while running really well on all kinds of different hardware. High performance and a bevy of graphics configuration settings means that Doom can run on just about any discrete graphics card from the last few years.

Now the Doom Eternal ray tracing update is here, though the tricky part about adding ray tracing effects to Doom is whether players would have time to notice them, since the game moves at such an incredibly fast pace. If we're too busy double-jump-dashing, shooting, and glory killing, does it even matter if this already visually impressive and efficient game engine gets even more eye candy? Would adding DLSS 2.0 support offset the performance impact that ray tracing effects have? The answers to these questions are a little more nuanced than we'd imagined, actually.


What Did Id Software Add To Doom Eternal With The Ray Tracing Update?

With Doom Eternal being written for the Vulkan graphics API, Id used the Vulkan Ray Tracing extensions to enhance the graphics in this game. Unfortunately, Id only implemented ray-traced reflections, so shadows and lighting are mostly unchanged from before. The reflections are pretty nice -- when you have time to stop and look around. Just about every shiny surface, from metal to water and glass, will show reflections of nearby objects, even if that object isn't on screen.


In the images above, we can see several of the differences that ray traced reflections bring. First and foremost, the metal edge of the platform reflects light quite differently when ray tracing is enabled. It's much more obvious in motion, as the reflections change as we move around that edge. The health potion bottle is much more subtle, though. We go from a pre-calculated reflection that doesn't change as we move around to a real-time reflection that moves and warps as we walk around it. Even in the still image the quality difference is apparent, because the reflections are obviously warped.


This next pair of images is quite a bit more obvious. Early in the first mission, we come across a big tower with a bell that fell to the floor. In the first image, without ray tracing, the reflection from the bell is dull and static. In the second image, the reflection really pops. The crumbled, shiny floor to the left looks a little different, but we'd be hard-pressed to tell which image has ray tracing if we didn't have the bell.


Windows with huge panes of glass make ray traced reflections really come to life. In the first image, there's no reflection at all. The game treats the glass like it was cardboard, so there's nothing to view. In the second image, however, we can see the Doom Slayer's reflection clearly as well as the terrain behind us. Even though nothing in that reflection is on screen, the game still has to render it so that it can appear in the image. This does have an effect on performance, however, as we'll discover shortly but it looks pretty sweet.

One other thing to point out is that most weapons are shiny and reflective, so just about every weapon is always reflecting the light around it. That small touch is a fantastic visual cue that helps to confirm that you, the Doom Slayer, is actually a part of the game world. These always-present effects do bring some value in the form of immersion.

The ray tracing effects look neat, especially in motion, but if they tank performance then they may not be worth the enhanced image quality. To fix that, Id included support for NVIDIA's DLSS 2.0 in the game to upscale lower-resolution images using Turing and Ampere GPUs' Tensor cores. As always, the revised DLSS algorithm looks fantastic in motion, and even pixel peepers struggle at times to tell the difference.

The images above show all three DLSS settings -- Quality, Balanced, and Performance -- along with the native resolution. To try to really make the differences stand out, we captured these screenshots at 1080p and applied DLSS, so that the Performance mode was upscaling from just 540p. To be honest, we're constantly impressed with how both DLSS and AMD's FSR as well, have managed to retain (or in some cases, recreate) visual details. NVIDIA's DLSS Quality mode is a no-brainer with ray tracing enabled in this game engine, and as we'll see in a moment, the performance it gets back is nothing to sneeze at.

Games that support ray tracing seem like an obvious target for AMD's FidelityFX Super Resolution, but so far, only The Riftbreaker's public beta and Godfall support both ray tracing and FSR. In that demo, we measured some pretty solid performance improvements on the Radeon RX 6800 XT, however, and so the ray tracing update for Doom Eternal makes us long for FSR here. Then again, as it turns out, Doom Eternal is one ray tracing-enabled title that may not need the performance uplift.

Doom Eternal really loves its VRAM. The cards we're testing with all have 8 GB of memory or greater, but just the act of turning on ray tracing adds another approximately 1.5 GB of memory space consumption to the workload. As a result, we were limited to Nightmare graphics quality at 1440p, which is a step down from the maximum Ultra Nightmware. At 4K, we had to trim things another step down to Ultra graphics.

These changes were necessary because the GeForce RTX 2080 SUPER and GeForce RTX 3070 we tested with only have 8 GB of memory. All of the cards were up over 7 GB of memory usage with the settings we chose, and the game refused to allow us to go any higher. The GeForce RTX 3060 has 12 GB of memory, but we kept the same graphics settings just to be consistent.

On the other hand, when we test the Radeon RX with 16 GB of VRAM, we added Ultra Nightmare, the highest possible setting, to our tests. It's the fastest graphics card in our tests, and it doesn't support DLSS. It gets its own charts separate from the GeForce due to the higher graphics settings. As you'll see, that card can handle it. To keep a decent point of comparison, we also kept the same settings from our GeForce tests. 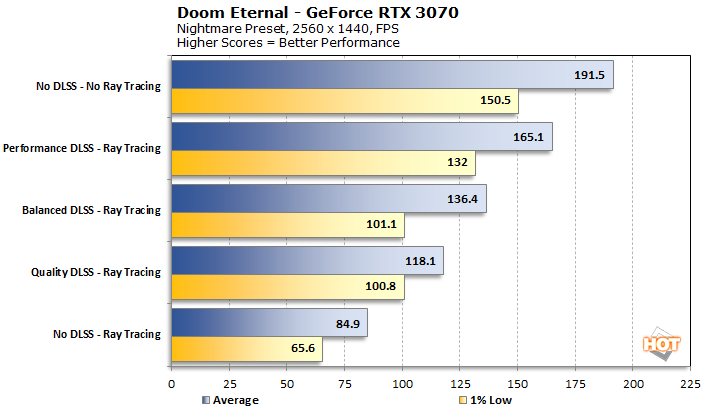 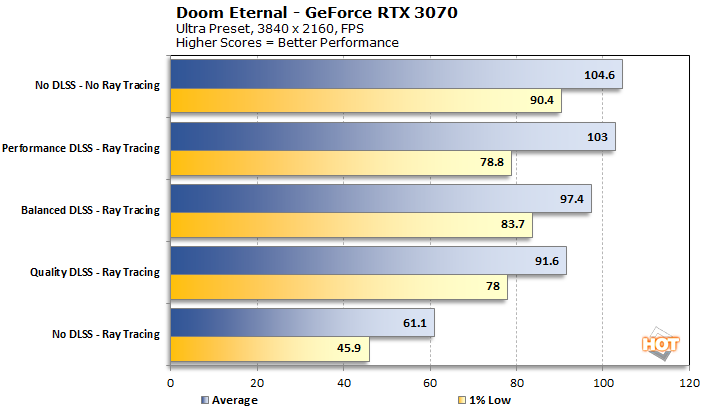 The GeForce RTX 3070, a card that should cost $500, can handle Doom Eternal with ray tracing enabled at both 1440p and 4K with the best possible settings given that card's limited VRAM. That's pretty incredible, all things considered. Even better, that average skyrockets using just a slight step down in input resolution with Quality DLSS. The averages never drop below any kind of smoothness threshold. Gamers with 1440p high-refresh displays will probably want to turn DLSS on, though. 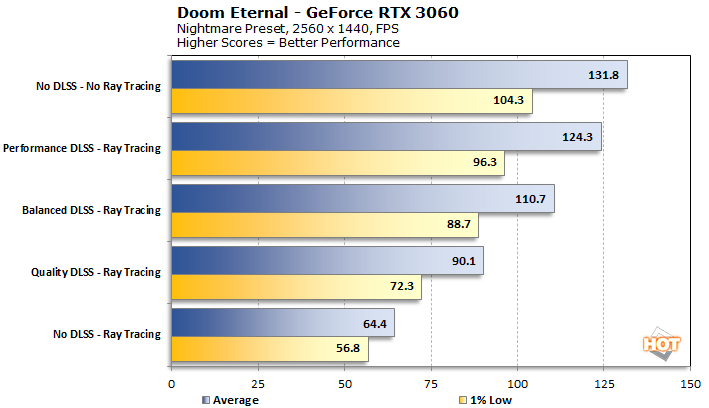 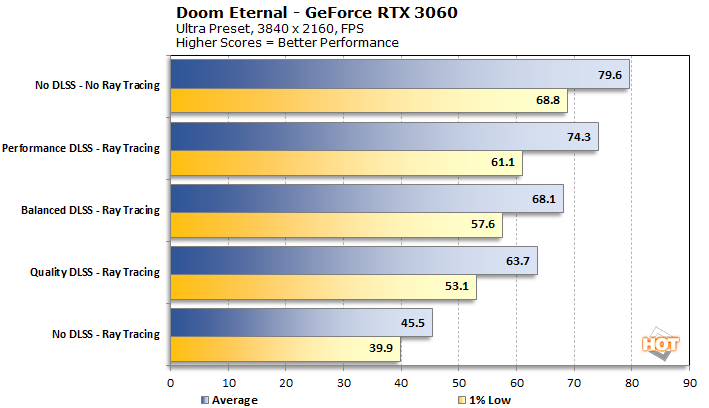 When we step down to the GeForce RTX 3060, DLSS becomes much more desirable, especially at 4K. The frame rates with ray tracing enabled aren't bad or overly choppy, but the game is so fast-paced that every frame counts. Just about everyone can feel the difference between 45 fps and 60-plus. At 1440p, just about everyone will want to turn on DLSS to get the most out of their displays, if only to prevent dips below 60 frames per second. 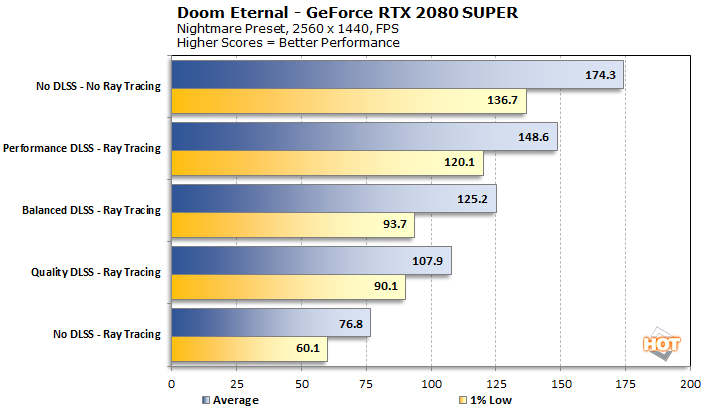 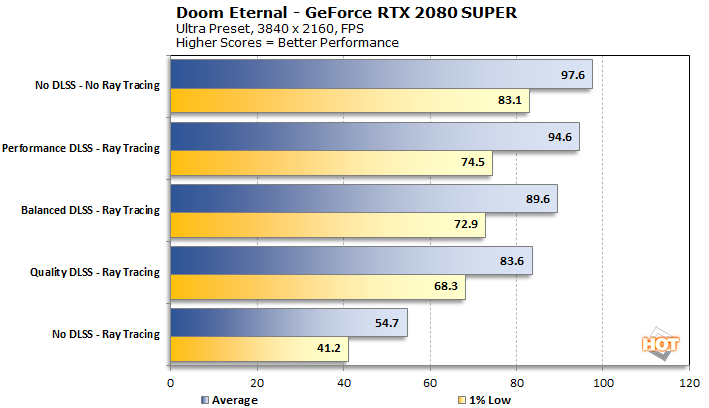 The older GeForce RTX 2080 SUPER nestles itself neatly between the two Ampere cards we tested with. Again, like the 3060, it's not quite got enough horsepower to average 60 fps at 4K, so DLSS helps to save the day. Gamers with 60 Hz 1440p displays may not care to turn it on, but it's a big help to get things buttery smooth on high-refresh displays. 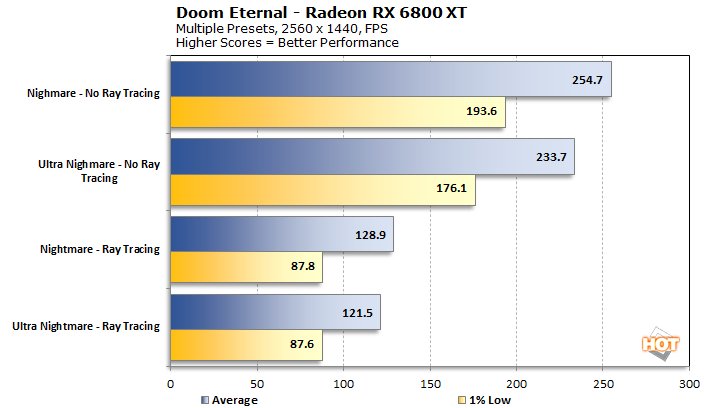 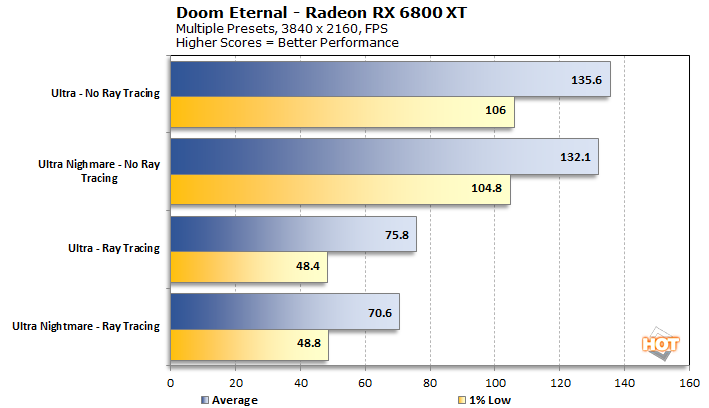 Lastly, the Radeon RX 6800 XT doesn't support DLSS, so we tested each resolution with a pair of settings: the same one from our GeForce scores, and Ultra Nightmare. The highest quality setting does require around 8.5 GB of memory, according to the in-game settings menu. That means Big Navi or GeForce RTX 3080 owners can turn on the highest settings with ray tracing and get some playable frame rates. In the case of the RX 6800 XT, the average stays up over 70 at 4K, which looks great, but the 1% low makes us long for DLSS or FidelityFX Super Resolution. On the other hand, the card has no problem whatsoever at 1440p. There's very little downside to turning on ray tracing if you have an extremely powerful card like this and a high-refresh sub-4K display. 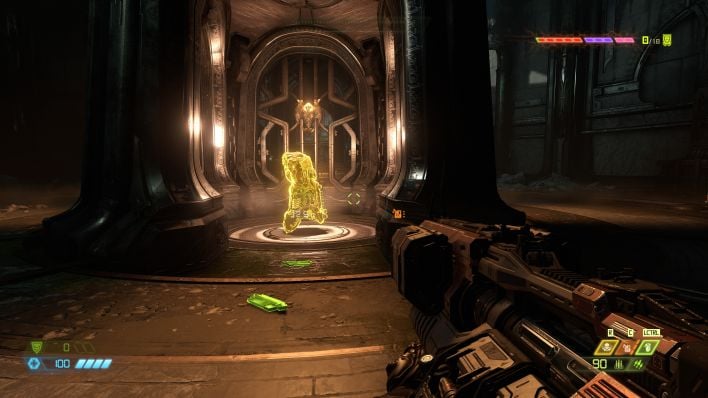 Ray traced reflections in Doom Eternal come at you pretty fast. If you don't stop and look around once in a while you could miss them. The game's pace of play, mechanics, and general parkour style make sure that you're never in one place for very long. On top of that, Id did a masterful job of getting the most fidelity out of plain ol' rasterized Vulkan graphics from the start. Between the two, players could easily be forgiven for not diving into the ray traced eye candy.

On the other hand, Doom Eternal runs those ray traced reflections incredibly well. If you're playing at 1440p, DLSS isn't even necessary for most RTX-capable hardware. The GeForce RTX 3060 is right on par with an RTX 2060 SUPER, and 2070 and higher cards are even quicker. Owners of most NVIDIA Turing cards could just flip on ray tracing and never even feel much difference in frame rate or responsiveness. DLSS 2.0 with Quality settings is a great hedge against that, too, since it looks fantastic and gives back about half the performance loss. AMD fans have nothing to fear from Doom Eternal's ray tracing update as well. On our Radeon RX 6800 XT, the game ran masterfully even at 4K. 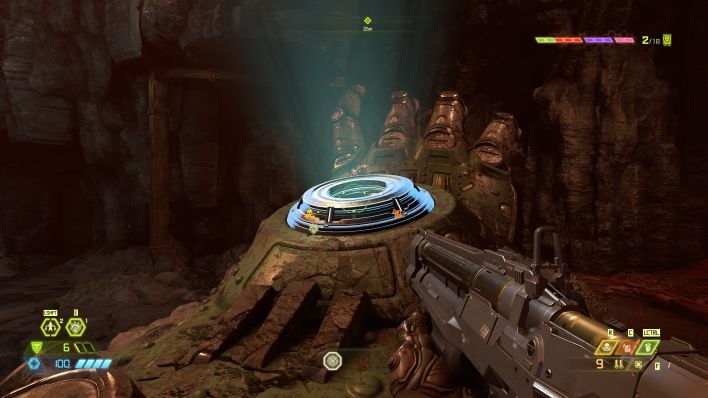 Frankly, however, we're conflicted about ray tracing in a game like Doom Eternal. Owners of hardware that can recreate these effects will likely want to turn it on, especially NVIDIA GeForce RTX owners that can make good use of the green team's Deep Learning Super Sampling. On the other hand, it's also somewhat likely gamers won’t fully appreciate the improved visual fidelity in action, because the game moves so quickly. The good news is that gamers have a choice, and we're excited to see what Bethesda will do with Id's latest engine in other games going forward. Gamers who stop to smell the roses lava will be rewarded.