Evaluating NVIDIA DLSS 2.0 Quality And Performance In Mech 5 And Control

NVIDIA DLSS 2.0 Put To The Test In MechWarrior 5 and Control 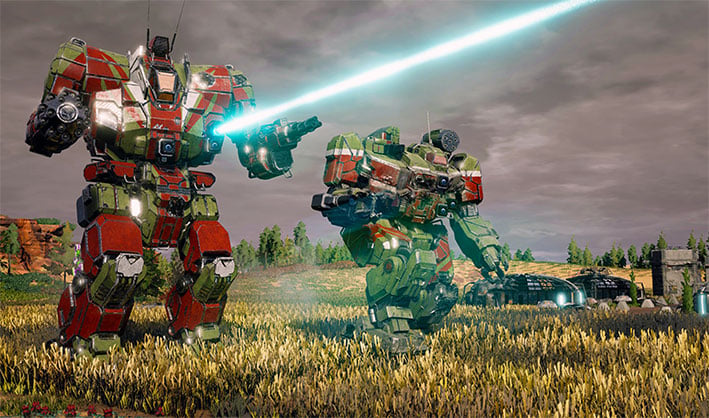 Back when the GeForce RTX family launched in late 2018, NVIDIA unveiled its Deep Learning Super Sampling anti-aliasing method, which upscales low-resolution images via machine learning on the GPU's Tensor cores. While the technology was promising, there were some drawbacks. First of all, image quality was typically lower than rendering at the target resolution, even when the game was in motion. Also, DLSS required per-game training on the graphics giant's neural network, and as a result adoption wasn't quite as high as NVIDIA would have liked. All that changed this week when the GeForce maker unleashed a new revision of its AI-powered anti-aliasing method, dubbed DLSS 2.0.

This time around, implementing NVIDIA's DLSS is much easier since it doesn't require time and resource intensive training on a per-game basis. Instead, the same AI routines are applied across all games, delivering a generalized work load which NVIDIA promises to be both faster and better looking than the original. If you haven't seen Paul's write-up with all of the details, definitely check that out. Here we're going to actually put DLSS 2.0 to the test and check it out in MechWarrior 5 and Control. 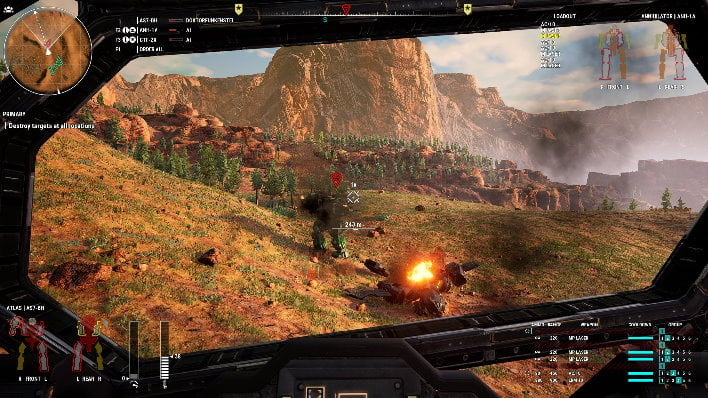 Rather than compare DLSS 2.0 against its previous implementation, we set a much higher bar: native resolution images. Below we have a couple of comparisons of how MechWarrior 5 looks at our test display's native 2560x1440 resolution and what different levels of DLSS 2.0 do with the image. Each picture has been scaled to twice its size using nearest-neighbor scaling, and preserved without compression artifacts in PNG format. 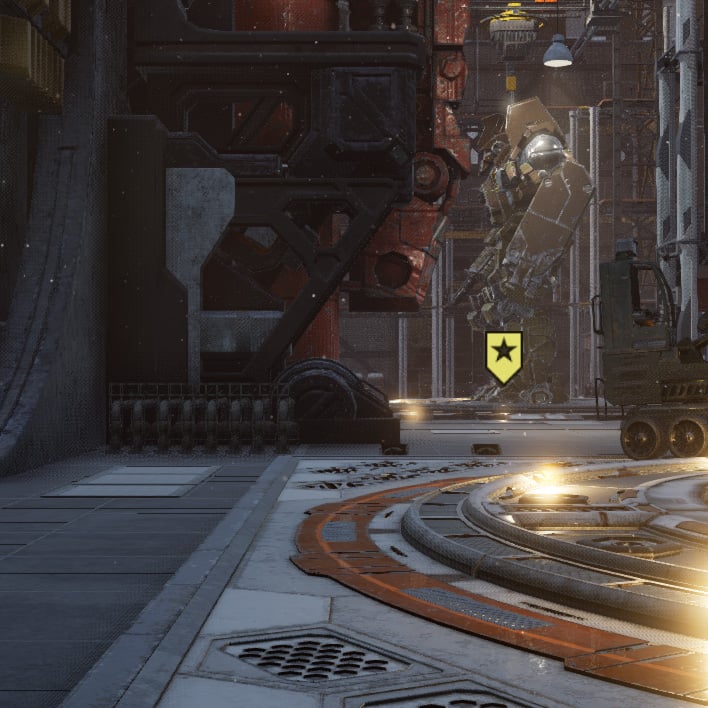 FXAA only - DLSS 2.0 is turned off. Tons of jaggies in repeated patterns here 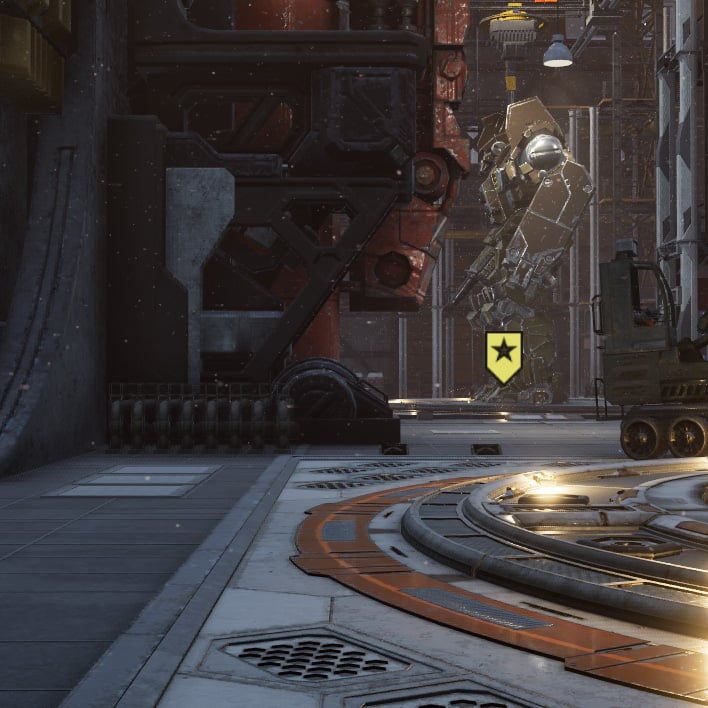 DLSS 2.0 in Performance mode smooths it out a bit, but there's still shimmering in motion 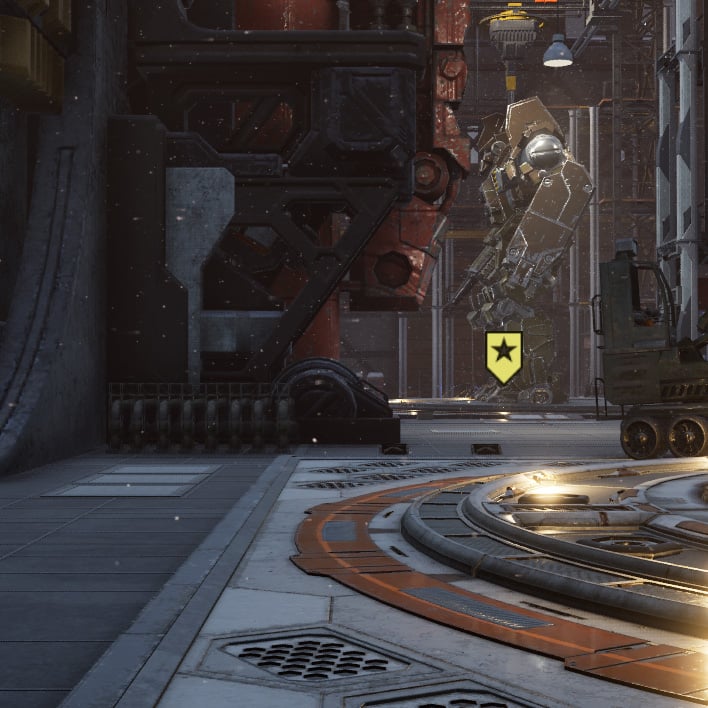 In Balanced mode, we're getting closer to a smooth image. The repeating patterns look like themselves again.

We're really just floored (ha!) by the results on the floor of this hangar, but there might be more to this story. First of all, the whole game has some noise to it without DLSS. The mechs, the floor, and even the buildings have some serious dithering patterns to them, and really, those ventilation holes should look better than they do. This very off-center viewing angle is the sort of thing that anisotropic filtering should fix on its own, so we're not entirely convinced that the game is rendering this scene like it should. As a result, this may be a somewhat unfair comparison, but this is how the game looks so let's compare anyway.

At a relatively high 1440p resolution, there's a ton of shimmering when the image is in motion, and the little ventilation holes on the other side of the mech platform just flat-out look wrong because of the extreme angle we see them. Even in the Performance mode, which uses just a 1280x720 image as its base, those little holes look like holes once again. By the time we crank up the DLSS setting to Quality, the whole image just looks better. There's no other way to say it than DLSS 2.0 improved image quality over FXAA.

One side effect of DLSS is that it doesn't seem to play nicely with MSAA (forced through the drivers) or TXAA enabled in the game. Performance actually tanked pretty hard with either of those anti-aliasing methods on top of DLSS 2.0, with the Quality mode only performing around half as fast as no DLSS. Once we switched back to the FXAA shader-computed method,

For performance, we tested out a GeForce RTX 2080 SUPER and a GeForce RTX 2060 at our display's native 1440p resolution. To get nice, steady frame rates we could easily reproduce, we used the tutorial mission's weapon test area and recorded frame rates while firing the Centurion's lasers, auto cannon, and long-range missiles. This gives us a look at some explosion effects and destructible buildings. 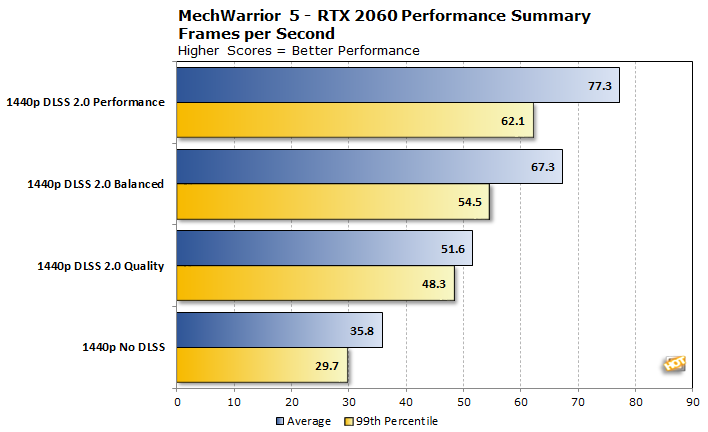 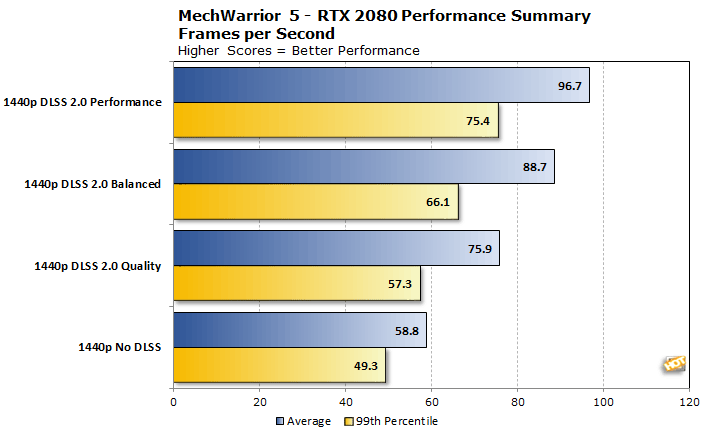 Pretty unmistakable how the performance trends for our two test cards. We cranked the details all the way to the max in MechWarrior 5 because anything less and our GeForce RTX 2080 SUPER was more or less CPU-bound. Finally with max settings, it's the graphics card taking a pounding, so we can see the effects of DLSS on both cards. At default settings, we're talking about 100 fps or more, so definitely turn up the detail if you can.

Just note that for the GeForce RTX 2060 you can eke out quite a bit more performance if you need to by lowering DLSS quality. Although, once DLSS is enabled it's already pretty smooth at a resolution the RTX 2060 wasn't really designed for. Averaging over 60 fps on the DLSS 2.0 Balanced mode is extremely smooth, and the game looks fantastic.

Meanwhile, the GeForce RTX 2080 SUPER doesn't really need DLSS as it's awfully close to 60 fps anyway. If you have a display with a higher refresh rate, turning on the Quality mode and taking a modest resolution hit is still pretty worthwhile. By the time you get to the Performance mode, the frame rate is very high all the time.

DLSS 2.0 And AI Anti-Aliasing In The Oldest House

The DLSS 2.0 update for Remedy's supernatural thriller (and personal favorite game of 2019) Control dropped just a couple days after MechWarrior 5, so we can take that for a spin as well. This game certainly had some quirks in its DLSS implementation at launch. For example, Jessie's hairs were broken and floating above her head, and anything with grid lines at all (for instance, an inbox basket on an office desk) wobbled and moved in motion. We're happy to report that all of that is absolutely fixed here. Because we could get before and after shots of Control, we've got a bunch of screenshots to look at.

We're zoomed way in here, looking at a 200% crop resized with nearest-neighbor sampling (integer scaling if you're fancy), so it's nice and sharp and brings out every pixel. This gives us a look at all of the detail in a small section of the scene, but it's representative of what we see throughout the game. In short, we think DLSS 2.0 looks amazing considering the performance boost. Let's take a look at why. 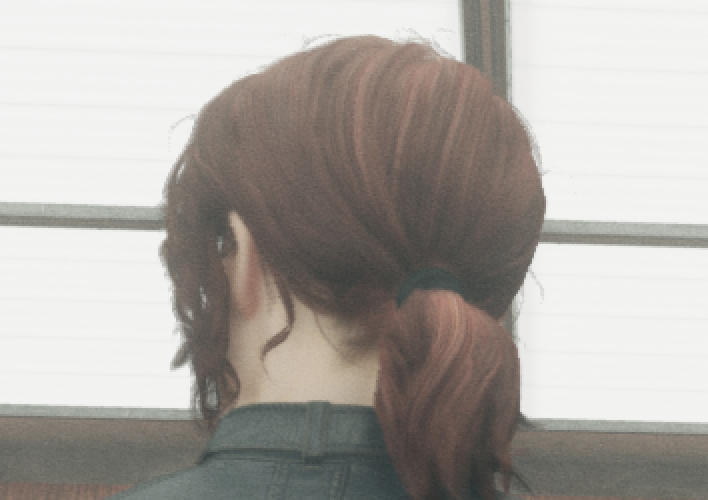 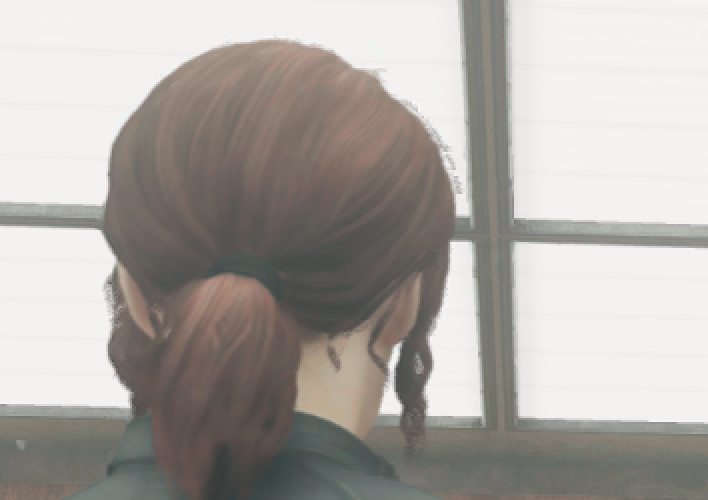 DLSS 1.0 on High looks like someone buttered the screen but somehow kept all the aliasing artifacts. 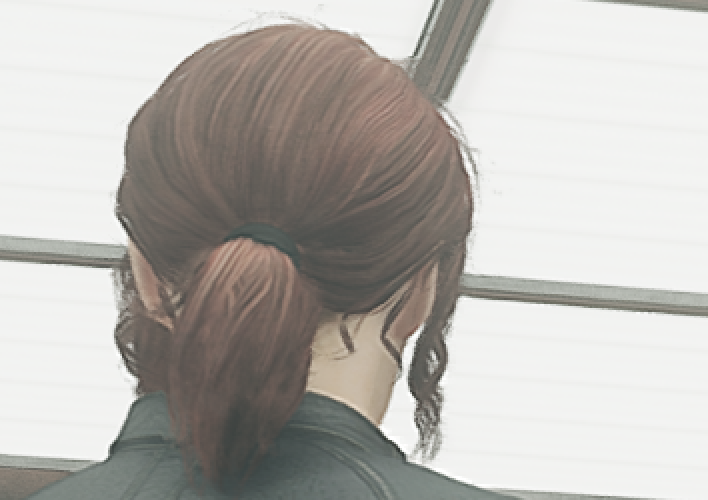 DLSS 2.0 on Quality matches the resolution of 1.0's High. The difference is night and day. 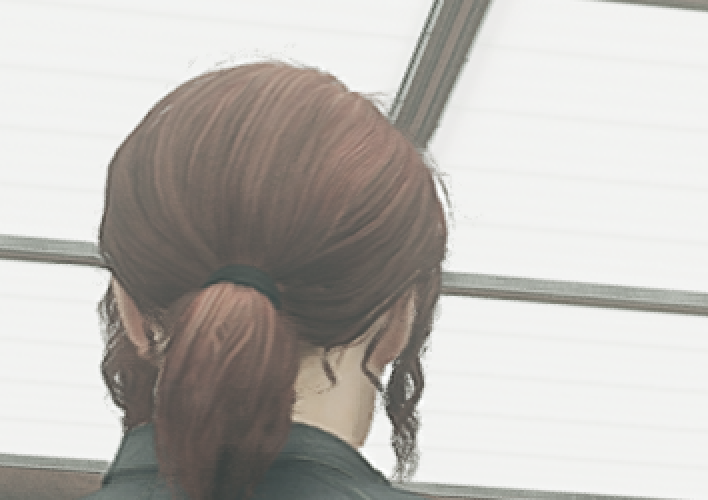 DLSS 2.0 on Performance even looks better than than the old version on High. This is quite remarkable.

The really telling comparison here is between DLSS 2.0 Quality and DLSS 1.0 High. They both use the same render target of 1706x960 but the difference is huge. Jessie's finer details pop right out using the newer method. All of those details are a blurred mess with the original implementation. We're pretty hard pressed to tell from screenshots the difference between Native and DLSS 2.0 High. There's no Balanced screenshot here, but it looks a bit better than performance but a tiny bit less convincing than Quality.

Because DLSS 2.0 applies itself to objects in motion as the scene moves, there's a little bit of temporal distortion (no, this is not Star Trek). That means that things which move and animate, like Jessie, give off a very faint halo. Try as we might, we couldn't capture it in screenshots in a way that was obvious because the halo is only apparent in motion. Stil, for the performance uptick we're calling it a win. This is nowhere near as distracting or experience-breaking as the wild warbling mesh patterns in the first iteration, and we think it's a pretty good trade-off for the additional performance it gains. 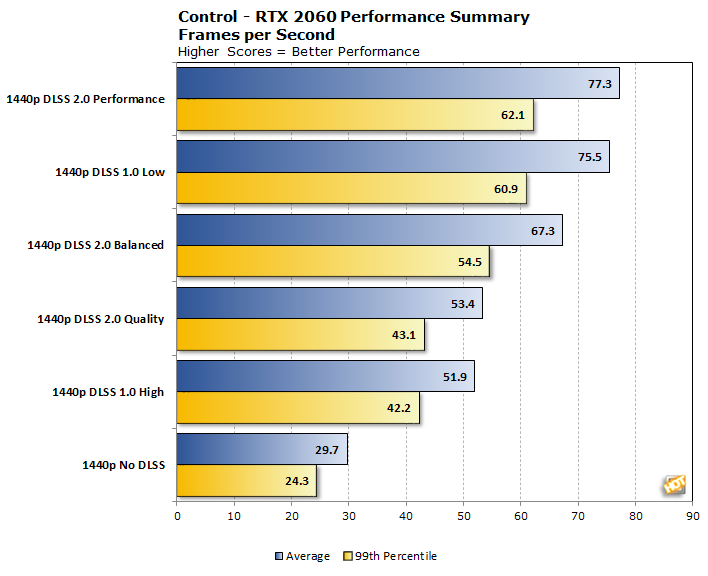 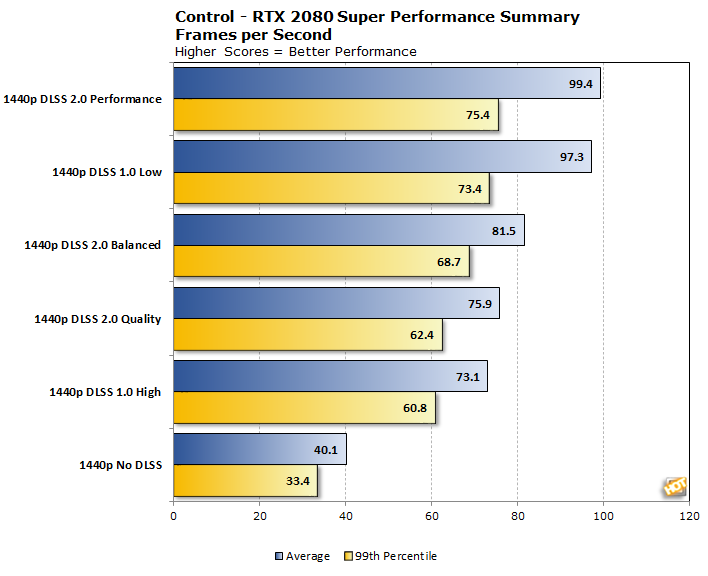 Just like before, all forms of DLSS represent big performance boosts on both cards. For the GeForce RTX 2060 it's the difference between silky smooth and not really all that playable at 1440p. DLSS 2.0's Quality mode renders at a sub-full HD resolution so performance is faster than native 1080p. You'd normally think that it wouldn't look as good at a lower resolution, but we disagree—the game looks better with DLSS 2.0's Quality setting at 1440p than than native 1080p HD too.

The real competition is between the two higher-quality DLSS implementations. DLSS 1.0 actually ran a tad slower than the updated version on both the GeForce RTX 2060 and the RTX 2080 SUPER while also delivering worse overall image quality. The difference in performance is not that great, right around 5%, so while it's consistent this could just be within the margin of error. On the other hand, the difference in quality is absolutely apparent. There's no doubt the updated version looks better while not hurting performance at all. 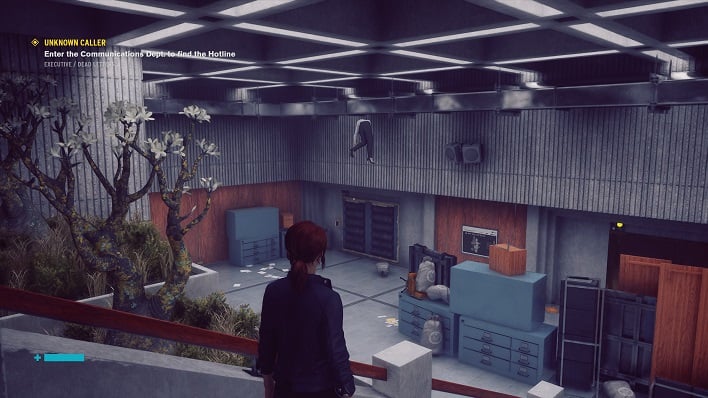 Overall we're pretty stoked about NVIDIA's revised DLSS algorithm. For one, it's much easier for developers to implement because the AI routine is content-agnostic. Its availability in Unreal Engine 4 and relatively simple API means it's a simple way to take advantage of a neat hardware feature that can boost performance without negatively affecting image quality. We've looked at DLSS 2.0 in just a couple of games, but already we think that it's a tech worth watching.

When it comes to the games we tested today, we think both Control and MechWarrior 5 have a lot to gain. For GeForce RTX 2060 owners, it's a no brainer. Turn on DLSS 2.0 on any game that supports it, especially if that game also has real-time ray tracing effects, because the performance improvement is absolutely worthwhile. If you've got a faster RTX card, there's still very little harm in enabling this new antialiasing and enjoying a performance boost if you need it.

NVIDIA deserves a lot of credit for what it's doing with DLSS 2.0. Not only does it overall improve image quality and performance, it does so at no cost to GeForce RTX owners. It's not very often that mid-generation software updates bring along this kind of improvement. We hope to see adoption pick-up soon.