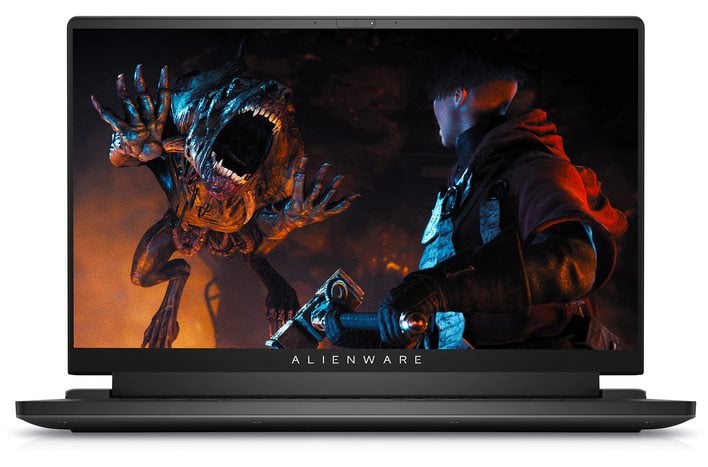 Over the last eight months or so, segment by segment, AMD's various Zen 3-based processors have taken the world by storm. High performance servers, desktops, and notebooks all feature AMD's flagship silicon, thanks in no small part to its excellent perf-per-watt and strong overall value proposition. That dynamic really started in 2020, but we could sense a bit of hesitancy on the part of manufacturers with last year's Ryzen 4000 series gaming notebooks, since those topped out with midrange graphics. This year, though, the kid gloves have come off and higher-end graphics options have been made available.

That's especially true with Dell's Alienware gaming brand. Last year, there wasn't a Ryzen gaming notebook to be found featuring the company's trademark futuristic curves and RGB lighting. That honor was left to the parent company's G5 15 SE. But AMD has since successfully invaded the Alienware camp and the company has pulled the curtain back on the Alienware m15 Ryzen Edition R5, which we'll be showing you here today. As its name implies, this notebooks is packing AMD's flagship silicon alongside some potent graphics options, including NVIDIA's GeForce RTX 3060 and 3070. There are also plenty of the usual high-end features on tap here, including fast displays, RGB lighting and all the fixings. Let's stop for a moment and meet the Alienware m15 Ryzen Edition R5... 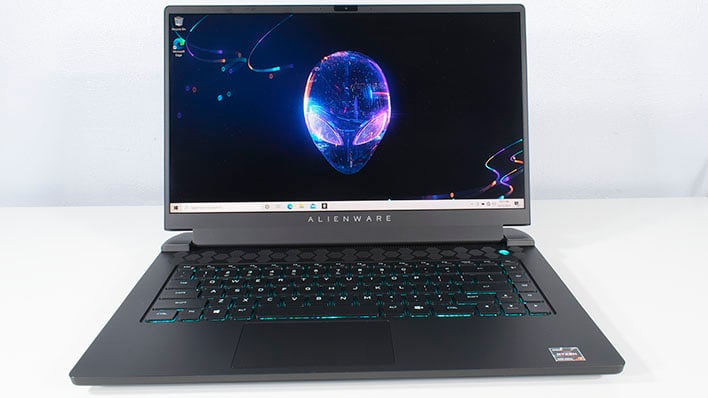 Our review unit is pretty close to the base model of Alienware's lineup, but that doesn't mean it's at all underpowered. To start with, we've got AMD's Ryzen 7 5800H processor, which has a 45 W TDP. This eight-core, 16-thread CPU features AMD's Zen 3 architecture running at 3.2 GHz on the base clock with a 4.4 GHz maximum boost. That means there should be plenty of single-threaded performance for all of our lightly-threaded tasks and enough multi-threaded grunt to push through the difficult tasks. This processor has 4 MB of L2 cache and 16 MB of L3 cache and AMD's integrated Radeon Graphics based on the Vega architecture. This integrated GPU is used mostly for light loads though, as the discrete GPU on board gets tasked with the heavy lifting in games. 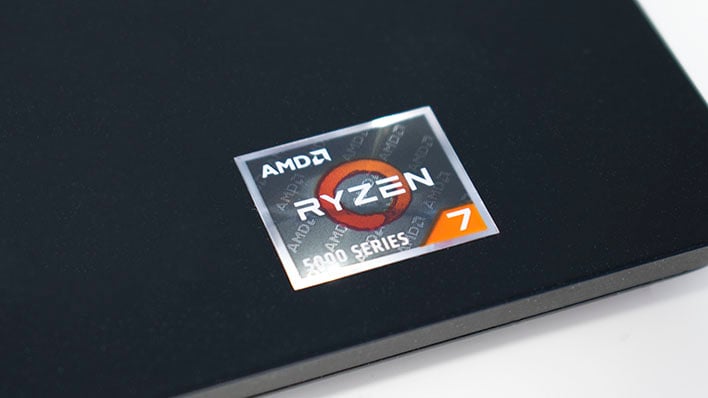 Speaking of which, the standard GPU is NVIDIA's GeForce RTX 3060 with 6 GB of GDDR6. The desktop model of the GeForce RTX 3060 is pretty speedy for 1080p gaming, and we're hoping for much of the same here. There are many configurations for all of the mobile Ampere GPUs, but Alienware gave this GPU its full thermal budget of 125 Watts. According to NVIDIA's control panel, this model maxes out at a 1.7 GHz boost clock, which isn't far off the 1.777 GHz of the desktop model. The GPU still has a 192-bit path to main memory, but the amount of that GDDR6 memory is halved from the desktop model's 12 GB. At Full HD that probably won't be too big of a compromise in games today, but there's also an 8 GB GeForce RTX 3070 upgrade if you seek more power.

The Ryzen CPU in our review unit gets 16 GB of DDR4-3200 RAM in the form of two SO-DIMMs. In a huge departure from the Intel-based models, Alienware has given the m15 R5 a pair of standard SO-DIMM slots easily accessible from the bottom of the machine, so buying the base model with a single 8 GB SO-DIMM and upgrading it yourself is a completely viable option. The m15 R5 supports up to 32 GB of RAM, but the 16 GB in our review unit is probably plenty for most users, at least in the near future. Primary storage is supplied by an NVMe SSD starting at 256 GB of capacity. Our review unit has 512 GB of storage, and this can also be doubled at the factory to a 1 TB SSD if desired.

Just because the m15 R5 is a lower-priced model doesn't mean that Alienware skimped on connectivity. There's a 2.5 Gigabit Ethernet controller aboard along with Killer's AX1650x wireless chipset. This includes 802.11ax, also known as Wi-Fi 6, and Bluetooth 5.2. The Wi-Fi in this machine is for real; connected to our ASUS AX3000 802.11ax router around 15 feet away in the next room, we downloaded from Steam as fast as our 400 mbps fiber internet connection could carry it. While that doesn't constitute a maximum throughput test, breaking 200 mbps -- let alone doubling it -- has been a challenge for 802.11ac devices in this test in the past. 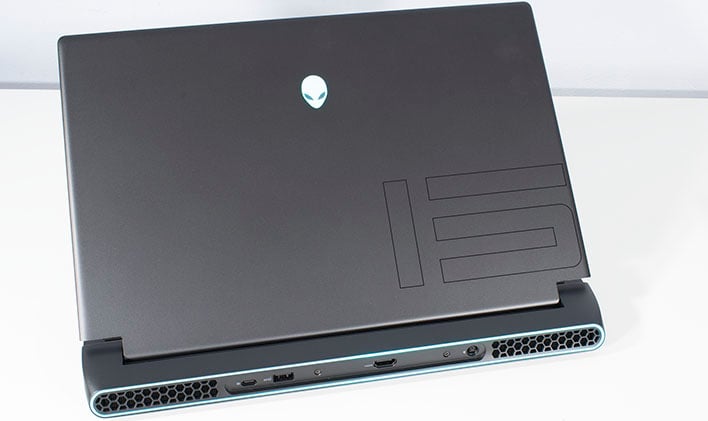 Alienware's hardware has a very extraterrestrial vibe to it, and that's no different here with the m15 R5. Our Dark Side of the Moon model has a very dark body, but it isn't quite black. The chassis has a high-endurance clear coat, which is something new for Alienware's notebooks. This should help it resist scratches and dings, but if Alienware hadn't told us it was there we'd have never known the difference in a good way. It's not like it's a thick shiny coat of polyurethane or something; it's thin and smooth in a silky way, not something hands would stick to like a polyurethane coat. The texture is very nice.

When we open the lid, we're greeted by the 15.6" 1,920 x 1,080 display (Full HD) with a refresh rate of 165 Hz. There are no 60 Hz options in the Alienware m15 R5, which we really appreciate. The only downside is that the 165 Hz display doesn't support G-Sync. However, there are 1080p 360 Hz and 1440p 240 Hz options, both of which do support NVIDIA's tear-free technology. The standard display is pretty nice, however, as the viewing angles are outstanding and motion is quite smooth. This panel doesn't get too bright, though, as it maxes out at just 300 nits on both 1080p options. The 1440p has a brighter 400 nit maximum brightness. All of the displays have Alienware and Dell's ComfortView Plus blue light filtering. The top bezel is pretty thin above the display, but still makes room for that hardware. It's the side bezels that are practically nonexistent, keeping the footprint to a minimum. 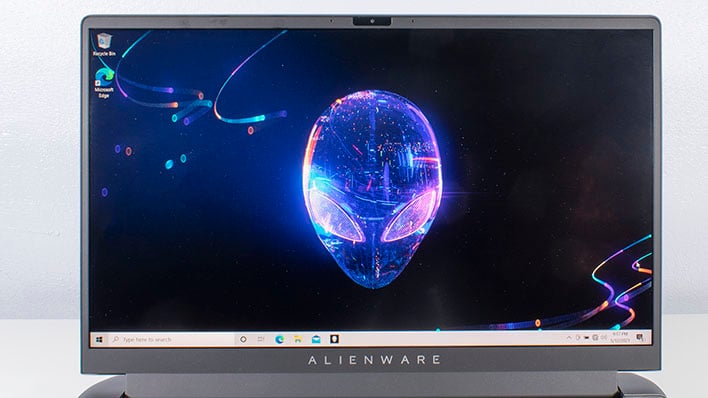 Above the display is a 720p HD webcam with dual noise-canceling microphones. We'd love a higher-resolution camera, but 720p seems to be the norm on notebooks still in 2021, so it's hard to call out Alienware in particular. The video is fine for chats, but streamers will want to get some sort of dedicated camera. The microphones do a very fine job for chats, and would probably be enough for someone starting out in the streaming world. Fan noise was eliminated and room noise was kept to a minimum according to callers on the other end of our Skype calls. The m15 R5 also has stereo speakers that do a nice job on calls and the occasional YouTube video, but for gaming we felt they lacked bass. That's typical on notebooks, but there's a headset jack for those who seek higher quality audio.

Alienware made a big deal of its partnership with Cherry to bring low-profile mechanical keyboards to its gaming notebooks. Unfortunately, however, the keyboard on the m15 R5 doesn't feature that mechanical goodness. Instead it's Alienware's normal four-zone RGB backlit keyboard with traditional switches. Still, these keys have 1.7 millimeters of travel and feel pretty good under our fingers. We wrote this review on the keyboard in the m15, and had no problems with ghosted inputs or dropped keystrokes. The force required to press the keys is a little more than a typical notebook keyboard, giving it a pseudo-tactile response like clicky mechanical keys, but it wasn't uncomfortable. Below that is a relatively small track pad with multi-touch and gesture support. It's fine for navigating Windows, but gamers will want external mice, for sure. 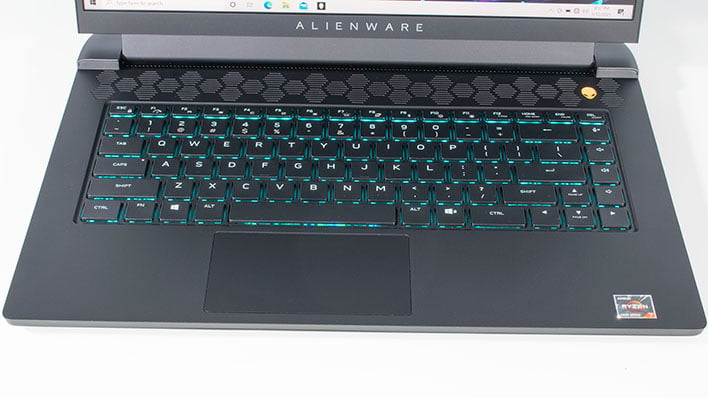 Being an Alienware m15, there are RGB touches everywhere. The lid and power button both have the company's alien-headed logo, and the keyboard supports four zones of RGB color. The backside of the notebook has the same Tron light cycle-style RGB ring as well. Alienware includes its Command Center software with the m15 R5, the power button, rear lights, and lid logo can be set differently than the keyboard. All of the lighting can be disabled, too.

Speaking of the back of the notebook, we like that Alienware uses it for more than exhaust vents. In the center of that ring sits an HDMI 2.1 port, USB 3.2 Gen 1 (5 Gbps) Type-A port, and a 10 Gbps USB 3.2 Gen 2 Type-C port. Using the back of the notebook for as many ports as possible helps keep the notebook from blocking mousing surfaces for both lefties and righties. Additional ports come in the form of the 2.5 Gbps RJ-45 connector and headset jack on the left side, and a pair of 5 Gbps Type-A USB 3.2 Gen 1 ports on the right. Gone are the Thunderbolt and Alienware Graphics Amplifier ports found on most Intel models, and gone is the micro SD reader from the previous m15 R4 with Intel processors. Thunderbolt and Graphics Amplifier support are sensible corners to cut when trying to keep the price down, but we like integrated card readers, which shouldn't add too much to the bill of materials, so it's missed here. 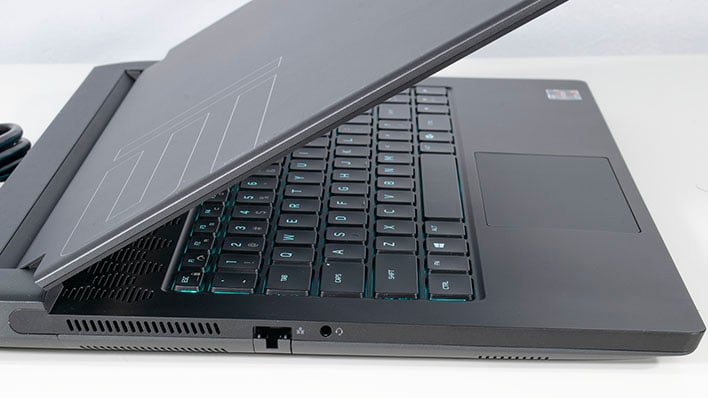 Alienware takes a pretty hands-off approach to software preloading. Our review unit came with Windows 10 Home pre-installed with the 20H2 update. The remainder of the included software revolves around drivers or hardware functions. To handle hardware management, Alienware Command Center does most of the heavy lifting. The Fusion tab shows all of the hardware monitoring and power profile adjustments necessary. Normally this is where we'd see overclocking controls, but they are absent from our review unit. As a result, we don't have any OC results to present on later pages. While laptops can often be overclocked by hand, we don't encourage it due to the thermal constraints that could be placed on the cooling system. 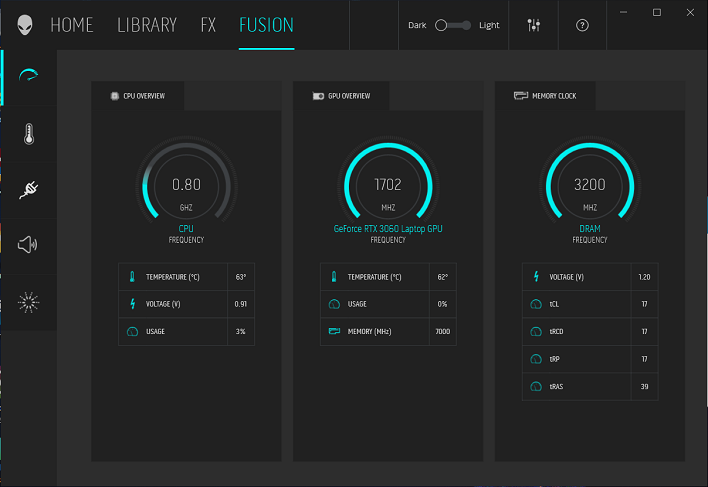 Alienware Update checks for driver, system, and BIOS updates for the unit and installs them if they're available. Prior to testing, we ensured that the latest of everything was installed, and there was a BIOS update available. Alienware Customer Connect will directly connect buyers with the company's support team. Lastly, Alienware Mobile Connect (much like Dell Mobile Connect) is a useful tool for connecting to Android and iOS smartphones. This tool has consistently delivered a more stable experience and more features than Microsoft's own Your Phone app, especially in the iOS realm. That's not really any different here. Send and receive texts and phone calls, mirror the screen, and use just about any of your phone's features from the desktop in a single app.

Now that we know more about the Alienware m15 R5, let's take a look at system performance.