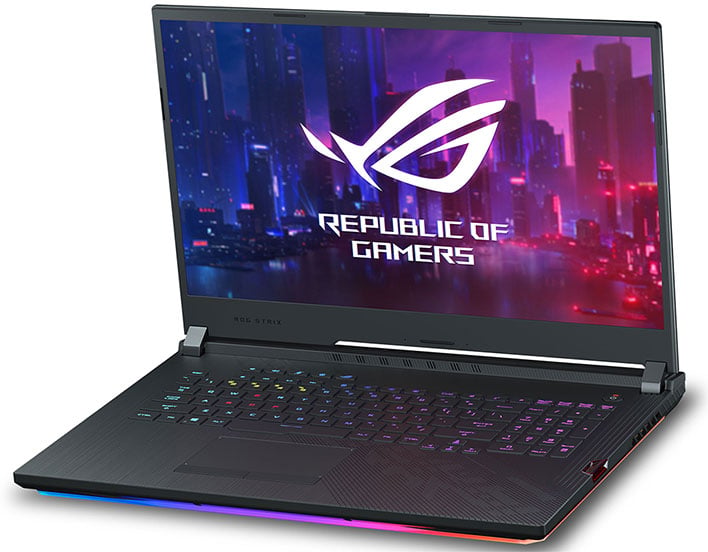 Sometimes it feels like the 17.3-inch laptop form factor is dying out, but fortunately for those who (like myself) prefer a bigger notebook, they can still be found. Proof of this exists with the larger of the two ASUS ROG Strix Hero III options. Offered in both 15.6-inch (G531GW, G531GV, and G531GU) and 17.3-inch (G731GW, G731GV, and G731GU) builds, buyers can go big if they want to, and not at the expense of portability—surprisingly, the 17.3-inch models are not very cumbersome at all.
We can confidently state as much after spending several weeks with the ASUS ROG Strix Hero III, model G731GV-DB74. Compared to the ASUS ROG G751JY that this editor has been using for the past several years while on the road, the ROG Strix Hero III is much sleeker and easier to tote around. It's not on the same level as an actual ultrabook of course, but at just 1.03 inches thick and around 6.3 pounds, the ROG Strix Hero III is a friendlier companion for travel (it's also a little bit lighter than HP's Omen 17).

Despite the svelte profile (for a 17.3-inch laptop), ASUS managed to cram some burly hardware inside this machine. As configured for this review, the ROG Strix Hero III touts a 9th generation Intel Core i7-9750H processor (Coffee Lake), 16GB of DDR4-2666 RAM, an NVIDIA GeForce RTX 2060 GPU (regular, not Max-Q), and a 512GB NVMe solid state drive. 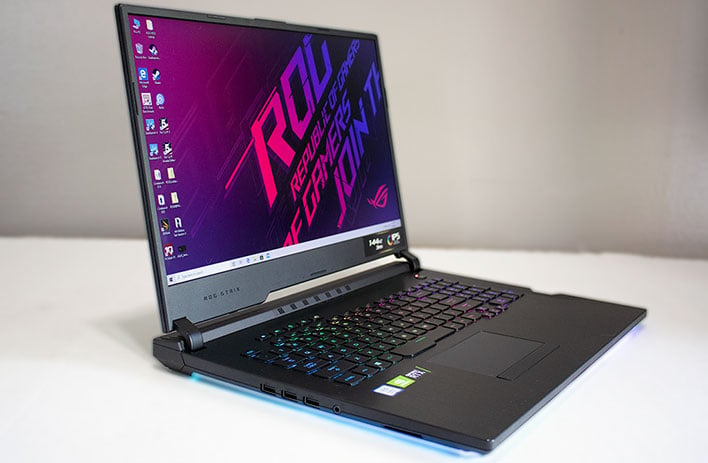 Here's a look at the complete list of specs...
There are various models and configurations available, with ASUS offering this laptop with up to a Core i9-9880H processor paired with up to a GeForce RTX 2070 GPU. It is also being offered with up to 32GB of RAM and up to a 1TB NVMe SSD and 1TB SATA SSD (so up to 2TB total). At some point, we also anticipate ASUS refreshing this series with Intel's newly minted 10th generation Comet Lake-H processors, but those released after we already received this configuration. 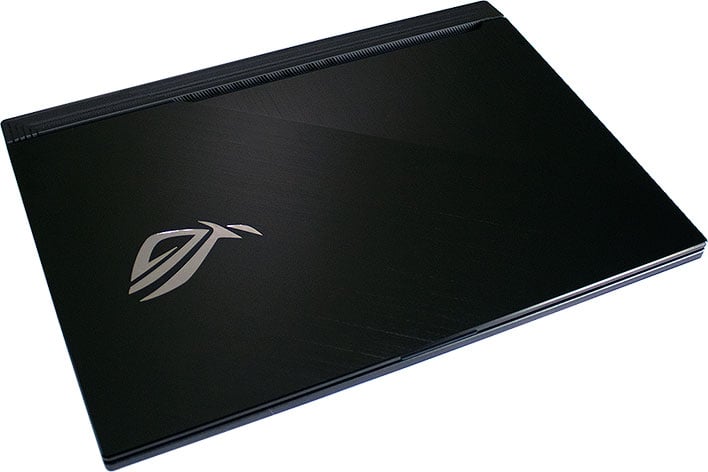 This is a laptop built for fast-paced gaming. There is just one panel option on the 17.3-inch model, which is an IPS screen with a 1920x1080 resolution, 3ms response time, and 144Hz refresh rate. The same display specs are available on the 15.6-inch version, as well as an even faster display that kicks the refresh rate up to 240Hz.
It took a bit, but laptop makers seem to have finally embraced higher refresh rates than the typical 60Hz option that had dominated the landscape for so long. That's not to say they have left behind 60Hz panels for good—they haven't—but there are a lot more laptop options with 120Hz, 144Hz, and even 240Hz refresh rates these days. Being able to refresh the display at these higher rates can be beneficial when pushing high frame rates above 60 fps, and so we are happy to see these speeds become more commonplace.
In terms of its specifications, this looks like a well-equipped laptop from top to bottom. Our only real quibble with it is the Wi-Fi 5 (802.11ac) adapter that comes standard. Some laptops are shipping with Wi-Fi 6 (802.11ax) adapters, which are better suited for handling multiple connected devices.
It's a minor complaint, though, especially since you can pick up a Wi-Fi 6 adapter at a very low price. That includes Killer's AX1650 that we reviewed a few months ago.
We said the ROG Strix Hero III is not cumbersome, especially for a 17.3-inch laptop, and the measurements bear that out—it checks in at 15.74 x 11.55 x 1.03 inches (399.7 x 293.4 x 26.2 mm) and weighs 6.28 pounds (2.85 kg). To put that into perspective, the ROG G751JY we reviewed a few years ago measures 12.5 x 16.4 x 1.7 inches and weighs a hefty 8.4 pounds. Hooray for progress!

To our eyes, the ROG Strix Hero III blends the design language of a typical productivity laptop with a gaming system. You're not going to confuse this with a standard laptop, but at the same time, ASUS didn't go bonkers with its gaming brush, painting a canvas that is less tacky than some of the wilder designs we have seen.
There is a large and reflective ROG logo on the lid, which sits on the left side. It's LED lit as well, and if you find the breathing effect distracting when the laptop is closed, you can change it or even turn off the lighting altogether. And while hard to capture in photos, the brushed aluminum lid adds a subtle touch of elegance that is less pronounced than HP's Omen 17.
Take your pick on which design you prefer. As far as feel goes, though, the ROG Strix Hero III wins easily. The allusion of a premium laptop vanished when handling the Omen 17, but the ROG Strix Hero III caters to the sense of touch with a sturdier construction and metal lid that simply feels better than plastic. It's also a fingerprint magnet though (and catches paw prints from cats too, in case you were wondering), which means you'll want to wipe it down somewhat frequently (or shoo your cat).

The partial business attire goes right out the window if flipping on the RGB under glow. Taking a cue from the Fast and Furious franchise (and particularly the original flick), there is a light bar that runs around the outer rim of the chassis. On this laptop, the light bar is independent from the keyboard backlight—we were able to enable and disable one without turning them both on or off. In other words, you can disable the under glow while still having a backlit keyboard. No word on when or if ASUS will NOS as an option.

This also ties in with ASUS's Aura Sync setup. If you own other compatible RGB peripherals, you can sync them so that the lighting effects are the same across the laptop and, say, a gaming mouse that supports Aura Sync. Fun stuff. 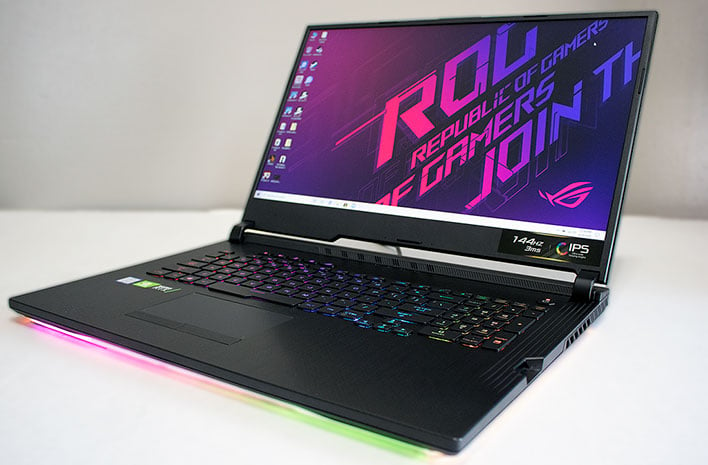 While the lid is made of metal, it is all plastic on the inside. Here again, though, it feels a little higher end than the Omen 17. And visually, ASUS jazzes things up with strategically placed grooves, such as on the right side of the laptop, along with angled lines and a power button that screams ROG.
The 17.3-inch display sports an in-plane switching (IPS) panel, a type that typically offers more flexible viewing angles and better image quality than cheaper twisted nematic (TN) screens. In this case, gamers also benefit from a fast 144Hz refresh rate. When playing games on the ROG Hero Strix III, the fast refresh rate keeps the action smooth, and allows the display to keep up with titles that burst past 60 frames per second.
We did not notice any significant backlight bleed or other unwanted traits in our time spent with this laptop. Simply put, it's a big display with excellent viewing angles. It's not perfect, though. This is not an edge-to-edge panel by any means. The bezels are not egregious on the top or sides of the display, but it is quite chunky on the bottom.
This laptop also lacks an integrated webcam. Some ASUS gaming laptops have been going in that direction, perhaps under the assumption that streamers will want to invest in an external webcam anyway. Still, during this time of social distancing, the lack of a webcam feels like a glaring omission, even on a gaming laptop. 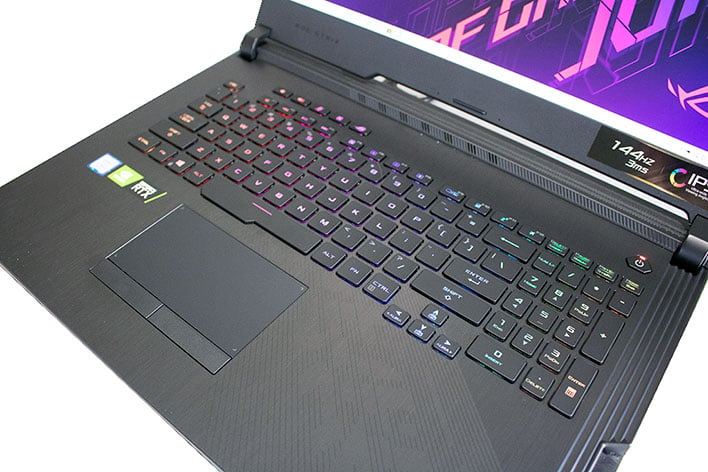 Typing on the keyboard is standard fare for a laptop. Low profile keys are the norm in this category, and we assume most people either loathe or tolerate them—in the absence of a survey, we'd be surprised if a large contingent of laptop users actually love low profile keys (we know there's a few who do, but they are the exception to the rule).

The keys are snappy (read: not mushy) and relatively easy to type on, for a laptop keyboard. Some of the keys are noticeably tiny, though, especially the arrow keys. The dedicated number pad feels a bit squished as well, though to a lesser degree.
There are no dedicated gaming/macro keys on the ROG Strix Hero III. However, there is an Armory Crate button (more on that later), a fan profile button to cycle through different cooling modes, and a few audio/media keys. Interestingly enough, ASUS also integrated the same fan profile control into the F5 key.
The trackpad is spacious enough, and there is plenty of room on the deck to rest your wrists. As with the lid, however, finger smudges are drawn to the deck like flies to you-know-what. It's all firmly designed, though, lending itself further to the sturdy construction. 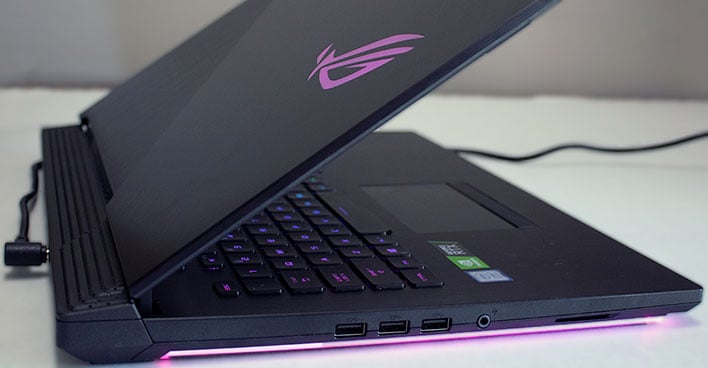 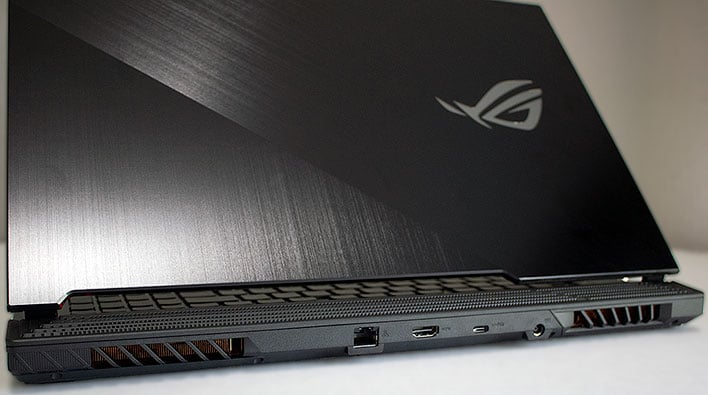 Port selection is interesting on the ROG Strix Hero III. Or more accurately, the port placement. Over on the left side you will find three USB 3.1 Gen1 Type-A ports and a single 3.5mm combo audio port. Then on the rear, there is a gigabit LAN port, an HDMI 2.0b output, a USB 3.1 Gen2 Type-C port with DisplayPort support, and the power connector for the 230W power adapter (or 280W, if opting for a Core i9 model).

The right side of the laptop lacks any USB ports or display outputs whatsoever. The only thing there is an interesting Keystone slot. ASUS bundles in a special accessory that is essentially an NFC key, which you can use to store and load customized settings.

"Keystones offer a versatile new way to personalize your machine and protect your personal data. These physical, NFC-enabled keys fit neatly into the Strix Hero III’s chassis, adding a subtle accent along the trim. When docked, they instantly transform your machine with different effects and game-specific profiles, or unlock access to a secret Shadow Drive for covert private storage. This is only the beginning of the Keystone’s potential," ASUS explains.
What's a Shadow Drive? It's basically an encrypted storage space where you can keeps files and programs out of view/access from others, for a bit of added security. It's a unique feature on a gaming laptop, and it will be interesting to see what other uses ASUS conjures up.
Now let's have a look at the software...