Intel first told us about the impending launch of Comet Lake-H mobile processors at CES, and it promised a lineup that would include 8-core/16-thread chips with turbo clocks in excess of 5GHz. Well, the time has come for the official launch of the 14nm Comet Lake-H family, and a number of Intel’s OEM partners are rolling out gaming laptops featuring the processors.

We should note that those 5GHz+ max turbo clocks – like the 5.3GHz frequency seen on the Core i9-10980HK – are only possible with Thermal Velocity Boost (TVB). In Intel’s own words, IVB is “opportunistically and automatically increases clock frequency by up to 200 MHz if the processor temperature is 65°C or lower and turbo power budget is available.” So, while hitting 5.3GHz is possible, we likely won’t be seeing any extended time at those speeds while intense gaming is going on.

All of the processors in the Comet Lake-H family support dual-channel DDR4-2933 memory, and have a TDP of 45 watts. TVB is supported on just the Core i7 and Core i9 SKUs, and only the flagship Core i9-10980HK is fully unlocked. Also supported with the family is Intel Turbo Boost Max Technology 3.0, one-click overlocking with Intel Speed Optimizer, and integrated Wi-Fi 6 connectivity (AX201). Other things that you would come to expect are support for up to 128GB of memory, 40 PCIe lanes, Thunderbolt 3 support (something that isn't currently possible with AMD Ryzen 4000 laptops) and support for Optane memory. 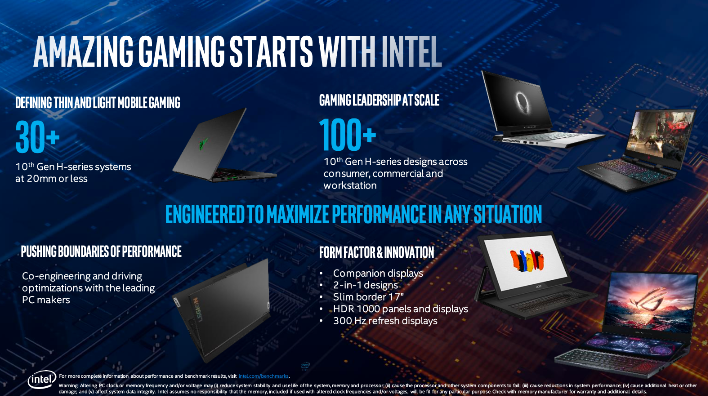 Intel states that Comet Lake-H is designed to replace gaming systems that are at least three years old, and its benchmark comparisons reflect this train of thought. For example, the company compares the new Core i7-10750H (6-core/12-thread) to the Core i7-7700HQ (4-core/8-thread). Intel claims up to a 44 percent uplift in gaming, 70 percent increase in content creation, and an overall performance improvement of 33 percent compared to the Core i7-7700HQ. 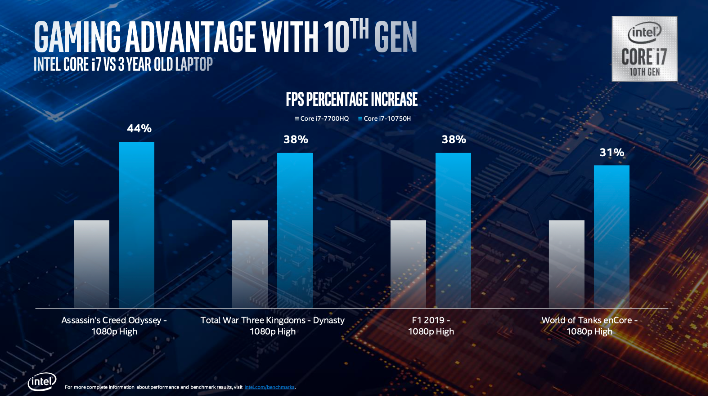 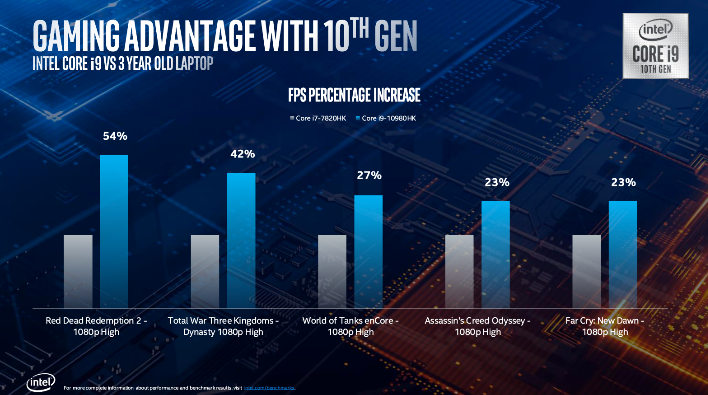 With the Core i9-10980HK, Intel is quoting 54 percent, 44 recent and 100 percent improvements respectively in gaming, overall performance, and rendering throughput compared to the Core i7-7820HK.

While all of these are no doubt impressive gains, we'd be more interested in seeing how Comet Lake-H stacks up against its immediate predecessor in performance: Coffee Lake-H. And the true test will see how these new processors fair against AMD's brand-new 7nm Zen 2-based Ryzen 4000 processors that began shipping in systems this week. Laptop systems featuring Comet Lake-H are shipping now.