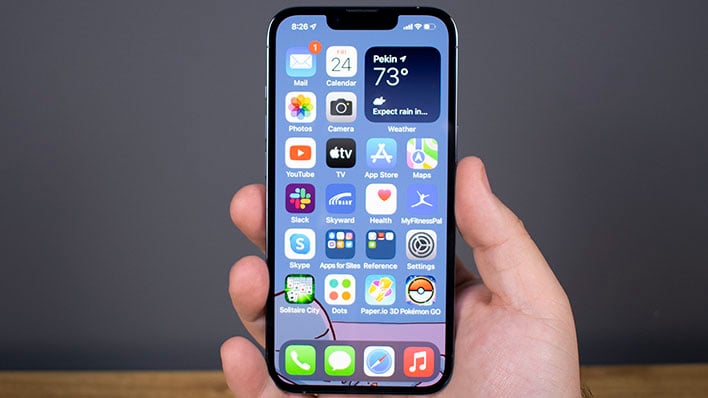 Another Apple iPhone launch event has come and gone, with the company's latest flagship and mid-range phones already shipping to customers, arriving on front porches just a few short days ago. In a second consecutive year of component shortages, Apple's deep resources and influence seemed to mitigate any potential issues securing chip fab space, which means there's plenty of iPhone supply to go around. This year's devices bring a mix of needed catch-up features, improvements and interesting bonuses that are designed to set the company's smartphones apart from its Android-bearing rivals.

Despite that, it kind of feels like some of the magic has worn off. These days it's easy to get blasé about yearly smartphone iterations, and the company's subpar presentation at the launch event didn't help. What used to feel like a spectacle full of live demos that could go awry in an instant turned into a glorified Microsoft Teams meeting, and it felt like Apple's presenters were talking to each other instead of customers. However, people buy smartphones, not presentations, and Apple's boring launch presentation doesn't nullify what appear to be some pretty interesting platform upgrades in a few spots. So, without further ado, let's meet the Apple iPhone 13 Pro. 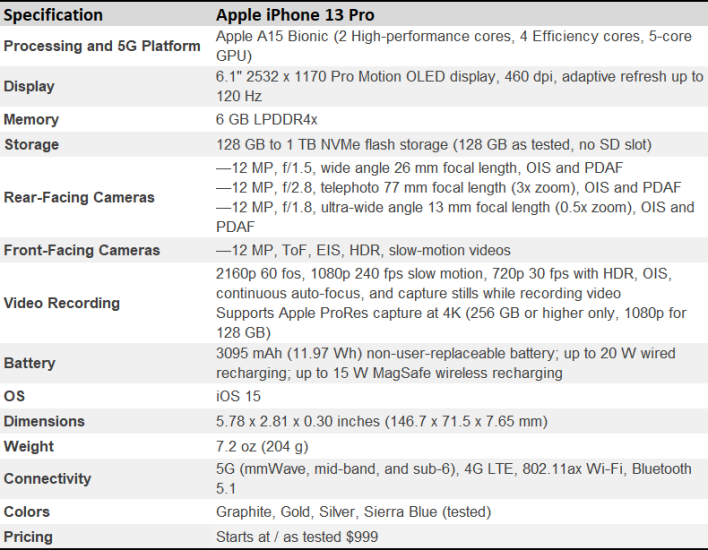 In an improbable decade-long streak, Apple has managed to improve its SoC performance by a considerable margin year after year. That's no different with this year's iPhone 13 lineup, all of which is powered by the A15 Bionic processor. The A15 uses Apple's latest CPU core design in a processor that features a pair of high-performance cores and a quartet of efficiency cores. Apple's always very coy about processor speeds, and as of this writing, none of the usual system monitoring utilities know much about it. 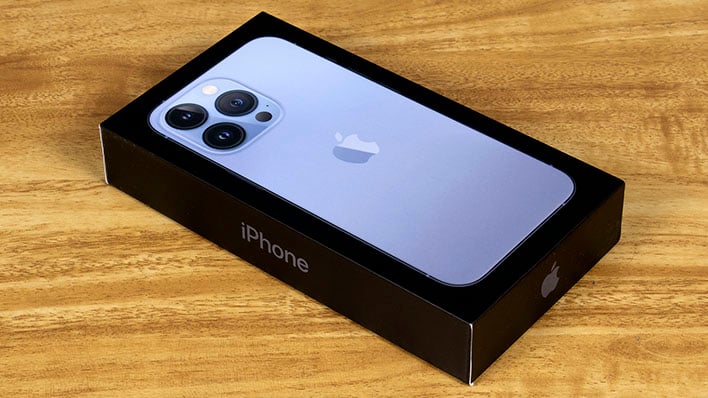 The new iPhone lineup has two variations on the A15 Bionic theme: one lighter spec for the iPhone 13 vanilla and Mini, and a beefier version for the iPhone 13 Pro and Pro Max. The Pro version of the A15 has a five-core GPU with 6 GB of memory, while the regular iPhone 13 and iPhone 13 Mini get by with a four-core GPU and 4 GB of RAM. This being a pro model, our results reflect the bigger GPU and RAM loadout. Those who are used to Android devices will note that 6 GB of memory is what low-end Android phones ship with these days, but iOS has traditionally been lighter on memory requirements and can typically get by with less.

For storage, Apple includes anywhere from 128 GB to 1 TB of NVMe flash storage, and this particular iPhone has the base 128 GB of storage. Unbeknownst to us at the time of ordering, the base amount of storage introduces some limitations that we'll get into when we discuss the camera. As is typical for Apple (and other high-end Android phones these days, unfortunately) there is no SD card expansion, so what you get is all the phone will ever have. Fortunately, iOS is pretty good at offloading photos and videos to iCloud automatically when the need arise. Unfortunately, usable amounts of storage are locked behind a subscription because iCloud only includes 5 GB of storage for free. 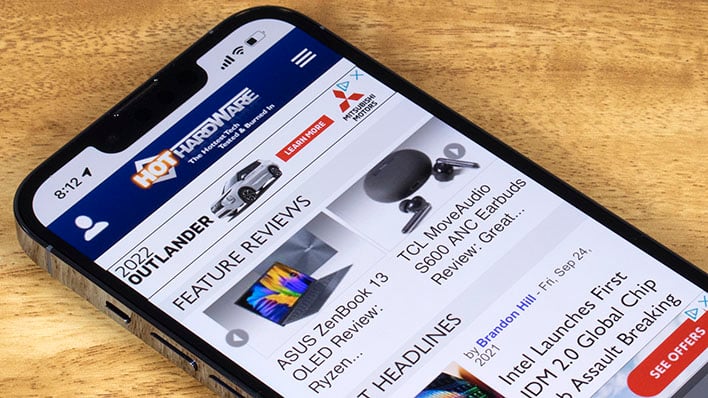 The real draw for iPhone upgraders around the world is most likely the display. Apple's Super Retina XDR display with Pro Motion moniker is a mouthful, but the display itself is quite nice. Boasting a resolution of 2532 x 1170 at 6.06 inches (which Apple rounds up to 6.1), the display has a fine 460 dots per inch density. More importantly, it has an adaptive refresh rate of up to 120 Hz. It's using an OLED panel which means that colors pop, blacks are dark and inky, and viewing angles are pretty nice.

Many Android phones, including the recently-reviewed Samsung Galaxy Z Flip3, have had high-refresh displays for going on three years now, but it's nice to see Apple catch up so that iOS users can enjoy it as well. Well, they'll enjoy it eventually. The build of iOS 15 that's on these phones today is not actually capable of allowing third-party apps to hit a 120 Hz refresh rate. Apple has acknowledged that bug and says a software fix is coming. When the phone can use it, like on the home screen and in Apple's bundled apps, 120 Hz looks great and the iPhone 12 Pro Max by comparison looks downright archaic. 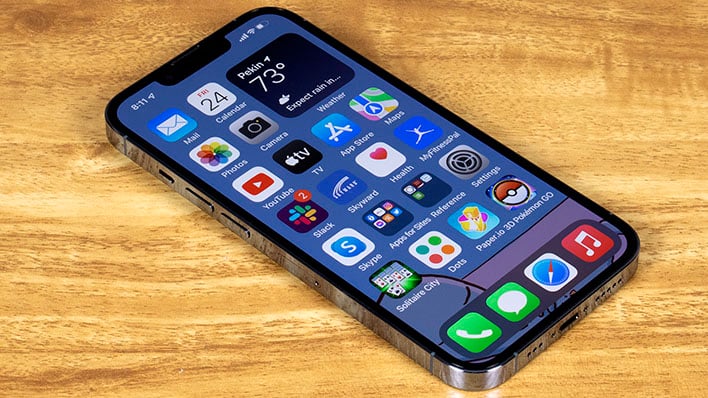 Beyond its high pixel density and 120 Hz refresh rate, the OLED display looks great right out of the box. Because it's got an OLED panel, the iPhone 13 has deep dark colors and a brilliant bright white point. These panels are capable of showing the full DCI-P3 color space at a maximum brightness of 1,000 nits. That's a solid 25% bump over last year's iPhone 12 Pro and even the current non-Pro iPhones 13. Along with the GPU and RAM spec bumps, the display is another big difference between the Pro and non-Pro iPhones. 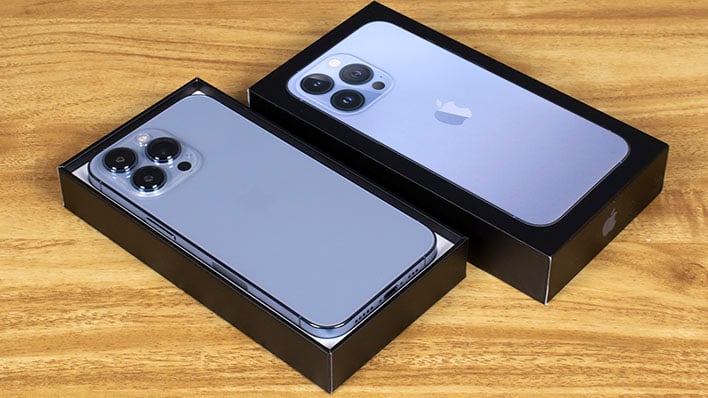 Despite the apparently small difference between the 6.1" and 6.7" iPhone 13 Pro and Pro Max displays, the bigger phones are really quite large. We've only got the 13 Pro in-house, so our iPhone 12 Pro Max will have to make a suitable stand-in to see the differences. The width and height dimensions are identical between last year and this year, so the comparison should be valid. The Pro Max phones are altogether too big for me personally, but the iPhone 13 Pro makes for a nice middle size that still slides into my pockets easily enough.


The external control layout on the iPhone hasn't changed in years, and that's arguably because it's just about perfect. On the right sits the power and sleep key, which invokes Siri when long-pressed. On the left sit two discrete volume buttons and a hardware toggle to silence the phone. I'd really like to see this feature make its way into Android flagships, because it's so easy to reach into a pants pocket and toggle the ringer off to silence all incoming calls and notifications. 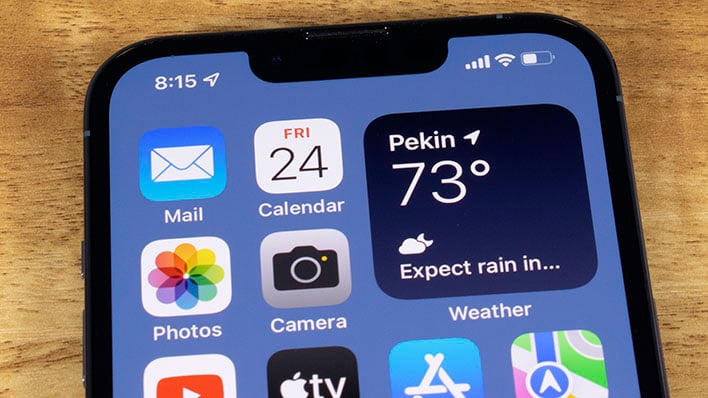 While Samsung, OnePlus, and others have moved on to a hole punch front-facing camera cutout, Apple insists on keeping its controversial notch. This time around, the notch is narrower than the chasm found at the top of the display in last year's iPhone, but it's still present and it still wastes as much of the top of the display as it ever has. To shrink the notch, Apple moved the earpiece speaker up the front, actually sitting above the top edge of the display rather than in the notch. That seems to have given a bit more room to get everything else lined up. Still, we'd rather not have to deal with it in a thousand-dollar smartphone.


Another holdover from previous models is the Lightning port. Apple has put USB-C charging ports on every iPad except for the 10.2-inch 8th generation model, but that has not translated to the iPhone lineup yet. As it's been since the iPhone 7, there's also no headphone jack. That's also true of the vast majority of recent Android releases, too. The port's absence presumably helps with the iPhone 13 Pro's IP68 water resistance rating. 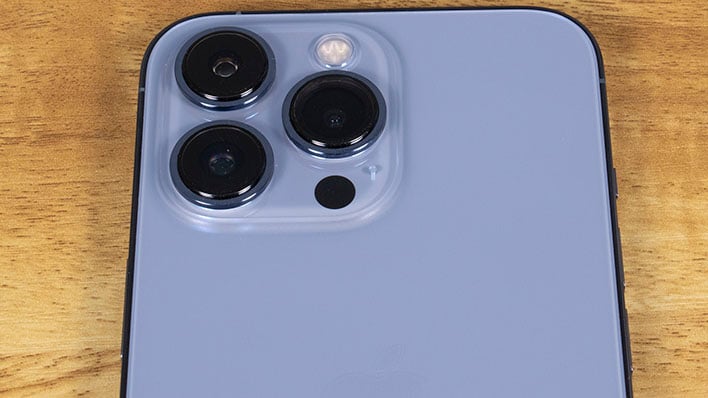 Finally, around the back, the camera arrangement hasn't changed much since last year. The iPhone 13 Pro has three lenses for wide, ultra-wide, and telephoto shooters. The LiDAR sensor and True Tone flash modules return, too. Everything sits in a square bump-out in the upper-left the same as it did last year. We'll get into camera performance later on.

Unlike Android phones where manufacturers are welcome to make UI tweaks or apply heavy-handed skins to the base OS, only Apple makes iPhones and so the interface doesn't change much from one phone iteration to the next. Sure, new features are introduced with each new release, but unless there are new hardware features to go along with them, just about every iPhone gets the same basic interface. Because of that, iOS is a "love it or leave it" experience that either attracts users in droves or drives them away screaming. For me it's always been a "love it" experience, even in the times where Android had features I wanted that iOS lacked -- like home screen widgets. iOS is simple and intuitive, but some feel that it unnecessarily walls in the experience, something of which Tim Sweeny is acutely aware. 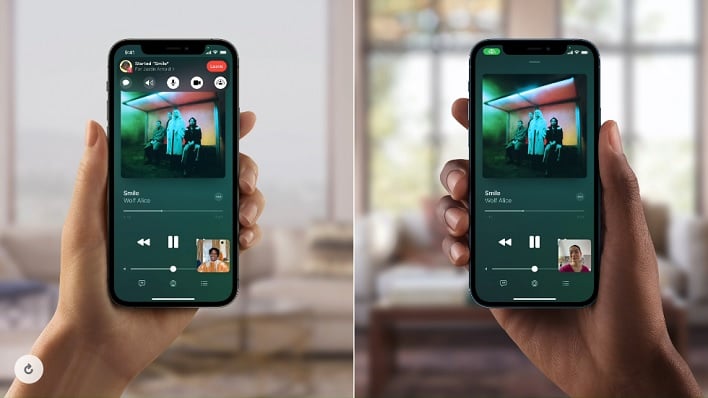 SharePlay promises to sync video and audio for group activities when it releases later this year.

This year's iteration on the operating system adds some features focused on connecting to other people, like SharePlay, which uses FaceTime and your favorite streaming apps to sync up media playback and video calls to let people watch shows and movies together. SharePlay also works with AppleTV streaming boxes, iPads, and Macs to keep everything in sync. Many streaming services are on board to include SharePlay, including Disney+, Hulu, and even Twitch. SharePlay isn't available yet, but once it is, it'll even support Android devices using end-to-end encryption in video calls through the web browser.


iOS 15 also extends Do Not Disturb schedules and settings into a series of preferences dubbed Focus. Users can set up Focus profiles with different settings for work, personal time, sleep, and anything else you can think of. Each profile can let certain contacts or apps ring through, silence different types of notifications and even auto-reply in Messages if the user isn't available.

Focus has a ton of customizations available, including turning off the notification count badges on the home screen, using a customized home screen that only has specific apps, and silencing notifications on the lock screen. For someone like me who constantly picks up the phone every time it buzzes or beeps, this has been an incredible increase in productivity. If you're someone with self-control, it may not be much help, though. 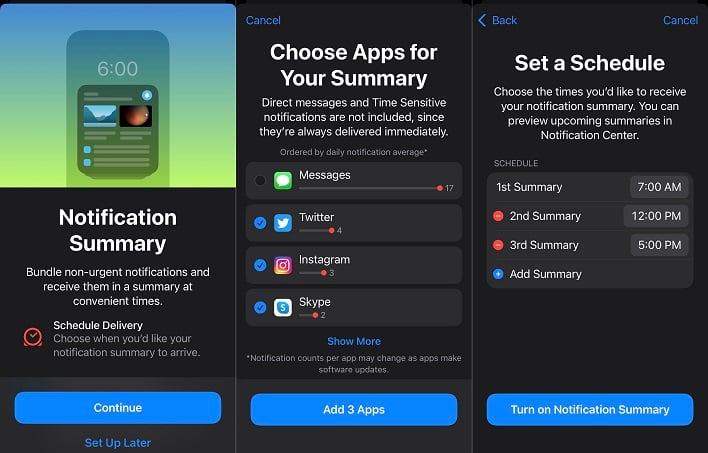 Lastly, iOS 15 adds support for grouped notifications and notification summaries. iOS was already capable of bundling up notifications for a specific app into a stacked list that could be expanded, but iOS 15 extends that by adding on-device AI to figure out the priority display order for notifications and even offer to turn off an apps' notifications altogether if it detects that you constantly dismiss certain alerts without reading them. On the other hand, notification summaries will weed out non-time sensitive apps and only show you those alerts later. That's great for games and social apps that don't require immediate user input.

Apple has a whole host of smaller AI-assisted features on tap including reading text with the camera, advanced search optimizations, and Memories in the photos app. The Memories concept isn't new, but iOS 15 adds indie pop tunes (and awful covers of great songs) while it attempts to time photo switches with the beat of the music.

Of all the photos I took that weekend (mostly filled with people), why did it pick this one for the cover?

What's unfortunate about the iPhone 13 Pro experience is that out of the box, Apple dropped the ball on two of its most hyped features. The 120 Hz Pro Motion display requires third parties to update their apps and doesn't quite work correctly with custom animations. Meanwhile, the seamless integration of the Apple ecosystem showed that it does, in fact, have some seams as the iPhone 13 family doesn't allow a paired Apple Watch to unlock it. What's worse, our 2020 Mac mini also stopped responding to Apple Watch integration because it's paired to the phone. Apple has committed to fixing these bugs, but it's a shame they even made it into the wild in the first place.

Now that we've gotten to know the iPhone 13 Pro, let's dive into the camera performance and new features next.
NEXT PAGE