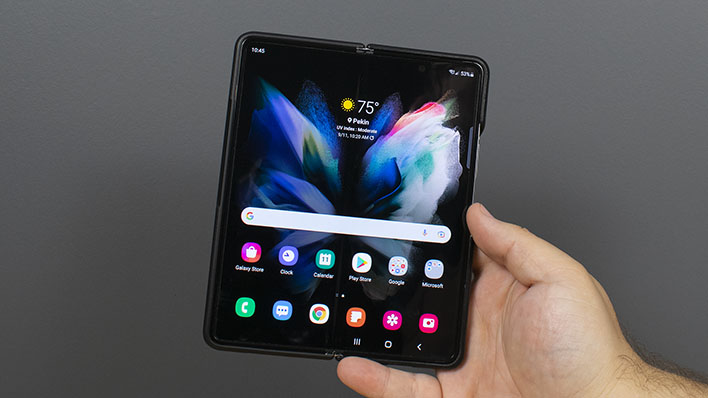 Samsung has been refining its innovative foldable phone line-up for a couple of years now. While the first iteration of the company's Galaxy Z Fold may not have been terribly robust out in the wild, last year's follow up was by most accounts a solid device. This year, the newest Galaxy Z Fold3 5G seems to have it all: a malleable 7.6" screen, more durable construction, Qualcomm's flagship Snapdragon 5G Mobile Platform, and enough memory and storage to keep the Galaxy Z Fold3 viable for a long time to come.

There are many questions we wanted to answer with this device. What's it like to carry around? Does the foldable nature of the main display feel strange under our fingertips? What can be done on the large main display can't be done on a "regular-sized" phone? Is it really worth $1600 - $1,800?

Before we answer all that and more, let's meet the Samsung Galaxy Z Fold3 5G in a quick video hands-on with a number of new Samsung devices at Unpacked 2021... 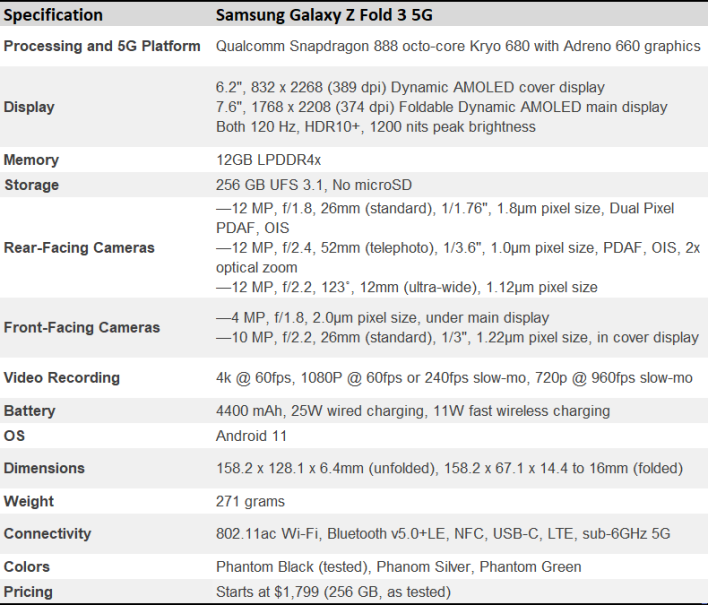 The Galaxy Z Fold3 5G is quite a large device. Folded, it's about the size of a Google Pixel 4a, but just a hair taller and narrower. However, it's pretty thick in its folded state -- nearly as thick as a Dell XPS 13. The last time I had a phone this thick, it was a Galaxy S3 with a third-party extended battery and custom back cover on it. Shoving it into a pocket, it's about as thick as a leather wallet, but longer. It's completely pocketable, but it was a bit of an adjustment that we got used to rather quickly. 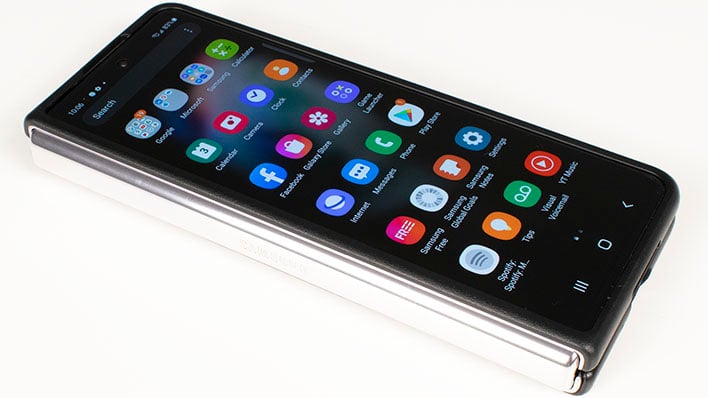 On the other hand, in its unfolded state, the Galaxy Z Fold3 is way too big to fit into the pocket of most dress slacks or jeans. The thickness is much more like traditional phones, though, so holding it with the big screen open is familiar enough. Either way, the weight doesn't change: 271 grams, or just over 9.5 ounces is pretty substantial when most phones are far lighter. It's nearly twice as heavy as the recently-launched Google Pixel 5a, for example, and more than 50% heavier than the Galaxy S21 5G. Still, it's not as heavy as any tablet, so it's not going to weigh you down much.

If it's not totally clear from the specifications, the Galaxy Z Fold3 5G has two discrete displays. One is a narrow 25:9 display that lights up when the phone is folded. The 832 x 2268 display has a pretty fine pixel density of 389 ppi. The other display is just a hair taller than an old school 4:3 CRT rotated on its side, measuring 7.6 inches diagonally with a resolution of 1768 x 2208. That's a slightly lower 374 dpi, but it's still nice and sharp. This display folds down the center when the phone is in the pocket, and opens back up when the device is unfurled.


Either way we chose to use the Galaxy Z Fold3, both displays have Dynamic AMOLED panels with a silky smooth 120 Hz refresh rate. HDR10 certification is on tap too, as the displays can hit a maximum brightness of 1200 nits on both, though that will only come in short bursts because that brightness will drain the battery pretty heavily. Because of their AMOLED nature, the panels have incredibly deep blacks for incredible contrast ratios and plenty of pop.

Out of the box, the display panels were configured for the Vivid color profile with extra saturation, but Natural is an option as well. There are also five different preset color temperatures and RGB sliders for a manual balance. Between the contrast ratio, color saturation, and a 120 Hz refresh rate, using either display is a feast for the eyes. Browsing the web on the big 7.6" display really makes a case for a big display on a phone. Subjectively, these images look great, as they do on just about all of Samsung's Dynamic AMOLED phones with deep contrast ratios and bright, vibrant colors.


Interestingly, watching videos on the main display isn't quite the immersive experience that we might have expected. This square-ish aspect ratio means that YouTube and streaming content formatted for 16:9 TVs has quite a bit of letterboxing. That allows the controls to show without getting in the way of the video, but it also means that videos aren't that much bigger on the main display than they are on the 19:9 cover panel.

If there's one problem with the Galaxy Z Fold3 5G's displays, it's the fold line that run down the center of the big 7.6" main panel. That's right, the crease from last year's model is back. No matter what we do to make sure the phone is open all the way, there's still a noticeable dip that runs down the center of the display. This never goes away completely and it's especially noticeable with light pages like most websites and even the Settings app. In games, it can really mess with your touch accuracy, too.

There's also a weird sensation when dragging fingers around the display. It was hard to just drag icons around on the home screen at first, because we'd either inadvertently lose contact with the display in the middle, or get stuck. Swirling in circles to spin up a curve ball in Pokemon Go was difficult, though that dip made it possible to throw PokeBalls in a completely straight line. That's a good thing, because playing the game on the extra-narrow cover screen had us hooking and slicing throws worse than our golf game.

The fold line is just a part of the current technology of foldable screens and the Corning Gorilla Glass Victus in particular, so buyers need to go into this with their eyes wide open. Our advice is to try one out in a store before buying if you think it could be an issue. It's certainly not a deal-breaker, as we got used to it over time, but it's not ideal. 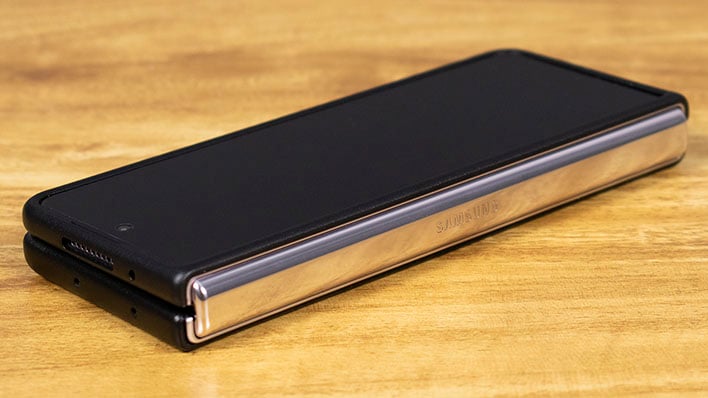 The Galaxy Z Fold3 All Hinges On This

What really makes the Galaxy Z Fold3 work is the hinge. There are three distinct panels to the back of the phone in its folded state: the rear which has the trio of rear-facing cameras, the front cover display, and the hinge on the side. That hinge slides into the other two panels as the phone opens up, so it can be just about perfectly flat on the back while unfolded. Samsung got the tension just right so that it doesn't flop open in our pants pockets, but also easily opens with one hand when sitting on the desk.

When looking at the hinge from the side, it's a shiny, polished strip of metal with the Samsung logo etched in it. It looks like it would be difficult to conceal that metal strip when the screen is open, but the phone manages to do so very well. When the phone is fully open and laying face down, the back is almost completely flat and the hinge essentially disappears -- it looks almost as if two phones are laying side by side. 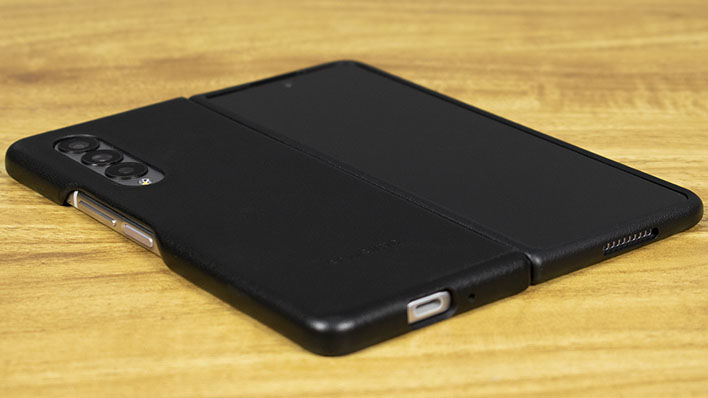 Android 11 On A Foldable Phone

The Android experience on the Galaxy Z Fold3 features the typical Samsung One UI skin, for the most part. Samsung shipped our review unit, which rides AT&T's network, with Android 11 and the July 2021 security update. That isn't quite as up-to-date as what's on Google's Pixel series, but it's still relatively current, and Samsung has committed to keeping the device up-to-date for a minimum of three years.


Samsung's One UI 3.1.1 ships with the Galaxy Z series (which also includes the Galaxy Z Flip 3) and has some new features over what shipped on the earlier 2021 flagships. The new Drag & Split mode allows users to drag a web link to the edge of the screen and open it in a new window, allowing for side-by-side web browsing. Three different apps can also be active simultaneously using the new Multi-Active Window mode. Lastly, the Rotate All Apps option will smoothly rotate multi-window modes to optimally use the screen real estate when switching from landscape to portrait or the reverse.

Many apps also have multi-column layouts, like Samsung's Messages, Phone, and Calendar apps. These all work intuitively. For example, the Messages app shows the conversation list in the left column and the contents of the selected conversation on the right. In the Recents section of the phone app, we can see the list of recent calls on the left and the selected call's contact details on the right. 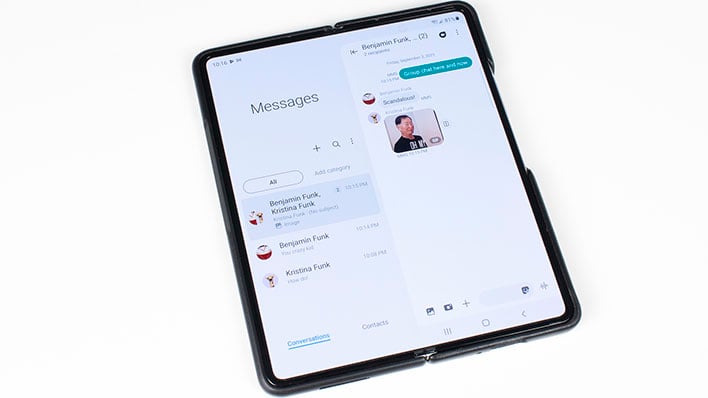 When the main display is on, many apps have a two-column split view to use the extra horizontal space
Google's own apps don't quite get in on the fun in such an intuitive manner as Samsung's apps, though. The mail list in Gmail fills the whole screen, but we can swipe from left to right to expose the folder list. The cover display uses the standard hamburger menu for Gmail, though, so the app does adapt depending on the currently active display. 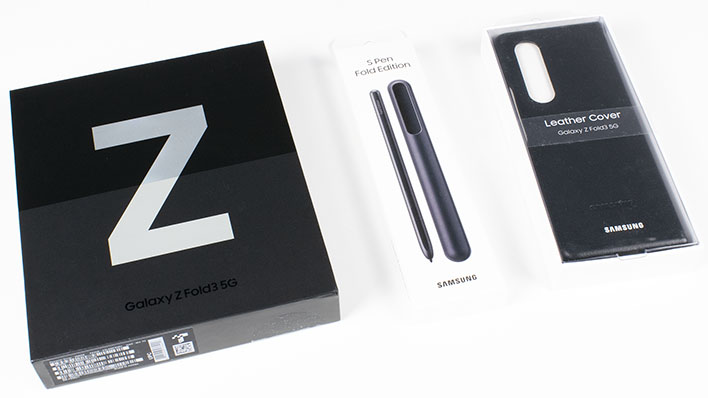 To protect the Galaxy Z Fold3, Samsung sent along a leather case, which is really two parts of leather-covered polycarbonate. Each half fits over its designated side of the device to protect the outside while folded, but the hinge has to be exposed so that it folds properly. One other accessory in the phone's box is a USB-C charging cable, though there's no USB-C charger included.

We also got the S Pen Fold Edition with our Galaxy Z Fold3 5G. This pen and holder combination do not ship with the device normally, but can be added on for $49. Unlike the traditional S Pen, the S Pen Fold Edition doesn't support hover gestures or have any sort of buttons for quick actions. On the other hand, it is a very accurate and low-latency stylus that's great for note-takers and artists. The main 7.6" display works well enough with it, though the phone will warn users that try to take it to the cover screen that it won't work there. The biggest problem when writing or drawing is the dip in the main screen, which can get in the way when using higher pressure.

Using the Galaxy Z Fold3 As A Phone

These days, more people will use a smartphone for the various apps and camera features, but the Galaxy Z Fold3 5G is still a phone after all. The most comfortable way to use the device as a phone is, unsurprisingly, folded. While we can hear callers when we put the big display up to our ear and they can hear us just fine, it's simply unwieldy. It's much easier to use in the folded position, for sure. Call quality was clear every time we used it during the review period, however, so conducting business on the Galaxy Z Fold3 shouldn't be a problem for anyone.

Our review unit runs on AT&T's network and came with a 5G SIM pre-loaded. In our little piece of central Illinois, AT&T's 5G network has not really come to life, unfortunately. The phone was on 4G LTE the entire time we had it, but AT&T's signal was just as strong as it usually is. Download speeds were on par with what we see from other AT&T devices, so the LTE reception was good.

Now that we've gotten to know the Samsung Galaxy Z Fold3 5G, let's see how the device performs...
NEXT PAGE