Did you pick up a shiny new iPhone 13 Pro expecting silky-smooth 120-Hz animations and seamless integration with an Apple Watch? I know I sure did, but things haven't gone as expected on Apple's new smartphone platform right out of the gate. One would think that Apple tested its APIs with the Pro Motion Display and paired an Apple Watch with the phone at some point, but two big bugs have sullied the iPhone 13 Pro experience for new owners right out of the gate.

First up is that the adaptive refresh display in the iPhone 13 Pro and Pro Max may not always run animations as smoothly as it possibly can. Apple's most commonly-used graphics frameworks -- UIKit, SwiftUI, CoreAnimation.CAAnimation, and SpriteKit -- automatically pace animations and the Pro Motion Display will run those at 120 Hz. We can confirm that by setting an iPhone 13 Pro side-by-side with an iPhone 12 Pro Max, both running iOS 15, and it's very obvious that the new iPhone's animation is smoother when scrolling Twitter and Instagram. For the most part, it just works as it's intended, but that's not always the case.

When an app uses the CoreAnimation framework and sync the timing to the display using the CADisplayLink API, the animation may run at any refresh rate that the display supports. That means an animation might run at 60 Hz one time, but at 10 Hz when running again, depending on what refresh rate the device is using. On top of that, those custom animations can't request 120 Hz at all unless the app's Info.plist manifest has been updated with a key that was not documented until recently, and not required for the iPad Pro's 120 Hz display.

Then and only then will an app's custom animations have access to frame rates above 60 Hz using the preferredFrameRateRange method in the CADisplayLink API. For whatever reason, this documentation only got updated to reflect the iPhone 13 Pro's display on Friday, so no third-party apps have access. There's no need to edit the manifest file for the iPad Pro adaptive-rate display, either, so this is the first time developers have had to declare it in their apps. That doesn't mean the app won't run at 120 Hz in some areas when using UIKit and SwiftUI (as it certainly seems that it does) but custom animations won't be as smooth as they could be. 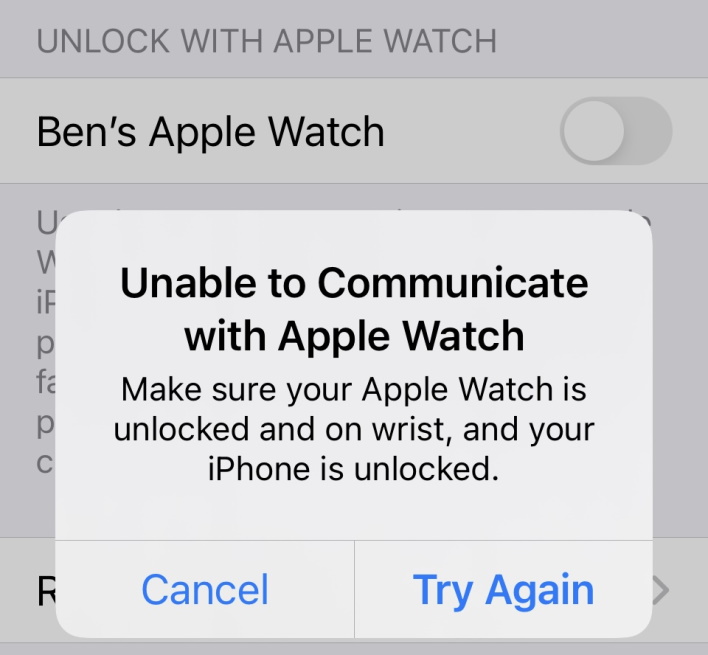 Second, iPhone 13 Pro users aren't able to unlock their phones with their Apple Watches. Last year, an update to iOS 14 added the ability for Face ID to unlock an iPhone even if the user is wearing a mask as long as an Apple Watch is paired and on their wrist, and if a specific option is toggled in the Settings app. For the last month or so, I've enjoyed the freedom of my Apple Watch unlocking my iPhone as I walked through the grocery store without having to pull down my mask. On Saturday, I got errors trying to enable the feature only to get thwarted by a connectivity error.

As it turns out, I'm not alone. Reports of iPhone 13s of all types unable to turn on the Unlock with Apple Watch setting started appearing in Apple's forums and on Reddit as soon as buyers started receiving their phones on Friday. The error is the same as the one pictured above: "Unable to Communicate with Apple Watch," with the details blame on the watch either being locked or not on your wrist. Apple has acknowledged the error and published a bulletin to its support community, saying that the issue will be fixed "in an upcoming software update." How this one made it through testing is anybody's guess, seeing as so many people have to wear masks in public still. For now, iPhone 13 owners can go back into the dark ages and unlock their phones with the passcode until the update is available.

This is not the kind of polished experience buyers rely on when they dive into the Apple ecosystem. However, as Apple has committed to fixing both issues and has published guidance publicly, we hope that this will be resolved soon. iPhone 13 devices are making their way into customer hands, and it doesn't seem like they'll have to live with these issues for long. Also stay tuned to HotHardware, as we will have a review of the iPhone 13 Pro coming soon.