Given the numerous leaks that have sprung during 2021, there was no way that Apple would have been able to keep all information surrounding its new iPhone 13 lineup a secret. With that said, it's still an exciting time for the Apple faithful when a new iPhone launches. 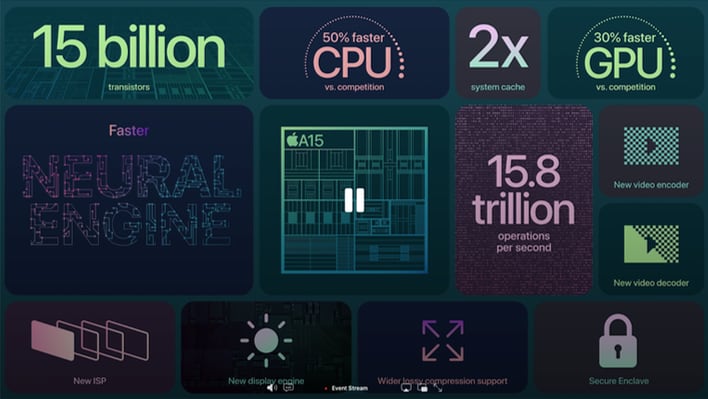 And as was initially rumored, Cinematic Mode has been introduced, which shoots in Dolby Vision HDR, and allows users to perform sleek rack focus effects in video. Inside, Apple is using a new A15 Bionic SoC, which we're assuming is built on TSMC's latest enhanced 5nm process node (although Apple didn't specify). The six-core design features two high-performance cores and four high-efficiency cores. In addition, a new 4-core GPU is included, which it says is 30 percent faster than the "leading competition." 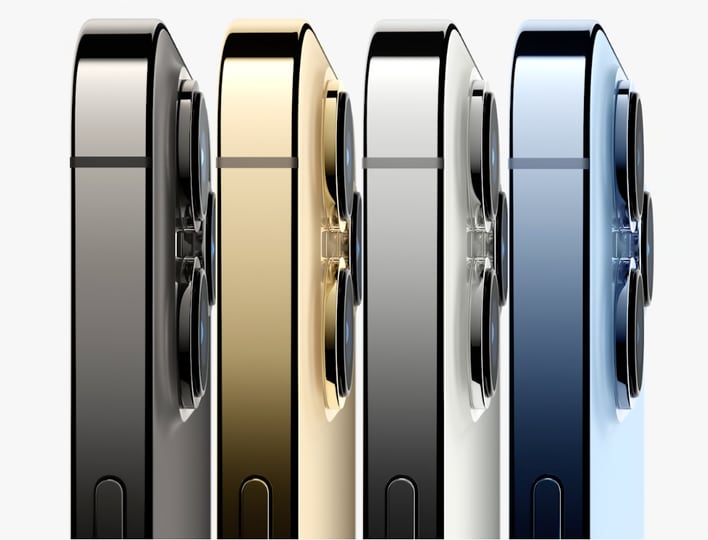 Apple then switched gears to the iPhone 13 Pro and iPhone 13 Pro Max. These smartphones include an A15 Bionic like the lesser iPhone 13 models but have a 5-core GPU. In addition, Apple confirmed that the Pro models now feature a 1000-nit 120Hz ProMotion display, which finally puts them on par with Android flagships from two years ago. The screen can refresh from as low as 10Hz to as high as 120Hz depending on the content shown, and it's all managed by iOS 15.

Three new cameras are included, with wide, ultra-wide, and telephoto (3x) sensors. The new telephoto lens opens up a macro mode for shooting up close, and all of the cameras can shoot in Night Mode. ProRes Video is also coming later this year to the iPhone 13 Pro smartphones in an iOS 15 update for end-to-end workflows. 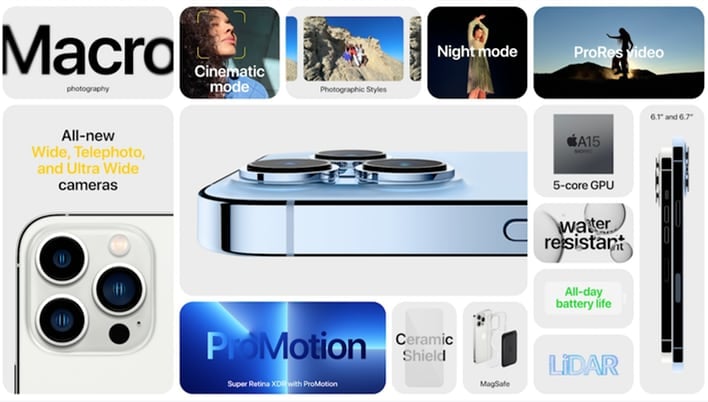 On the subject of battery life, the iPhone 13 Pro and iPhone 13 Pro Max lasts 1.5 hours and 2.5 hours longer, respectively, compared to their predecessors.

Apple is holding the line on pricing compared to last year, but there's still a bonus in it for customers -- at least for those that buy the baseline iPhone 13 and iPhone 13 mini. Both smartphones have doubled in starting capacity from 64GB to 128GB. Higher tiers are available, coming in at 256GB and 512GB. The iPhone 13 and iPhone 13 Pro continue with 128GB base configurations but are also available with 256GB and 512GB configs. And in a first for the iPhone family, the Pro models can also be equipped with up to 1TB of storage, which is a boon for photographers and videographers.