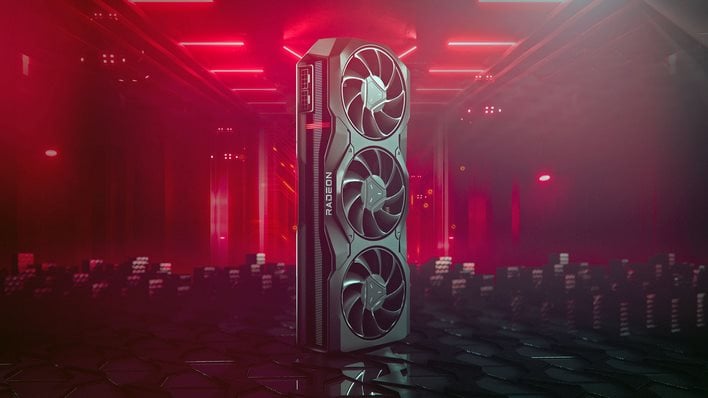 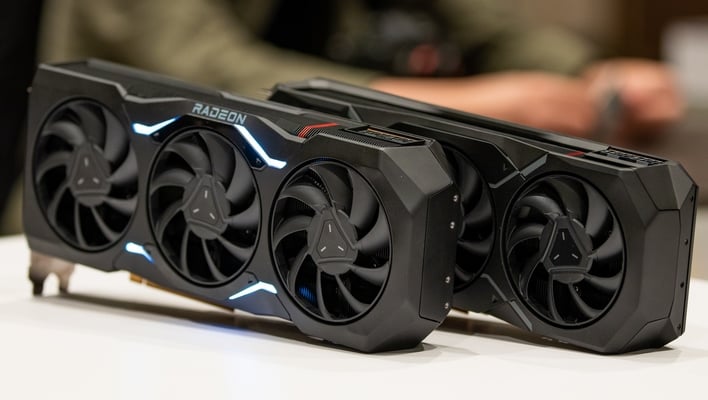 These cards are set to battle it out with NVIDIA’s new Ada Lovelace GPUs, namely the GeForce RTX 4090 and 4080, but perhaps not as directly as some may have expected. AMD says it is committed to competing in the “sub-$1000 GPU space” and is poised to compete on value if not raw horsepower. While AMD has shared some internal performance numbers today, we will need to wait for independent testing from our own review here at HH and others to truly assess how this messaging holds up. 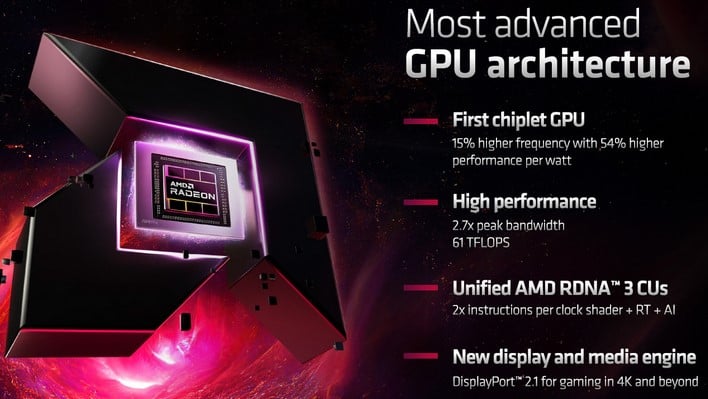 The Radeon 7000 series is built on AMD’s RDNA 3 architecture. AMD states that its goals for RDNA 3 are to accelerate performance-per-watt leadership, raise the bar for high resolution and high framerate gaming, and to usher in next-gen gaming experiences. AMD has turned to a chiplet architecture to accomplish these goals, a first for gaming GPUs.

The chiplet complex consists of a 5nm graphics compute die (GCD) which is flanked top and bottom by up to six 6nm memory and cache dice (MCD). The RX 7900 XTX uses the full complement of 6 MCDs which aggregates as a 384-bit memory bus (64-bit per die) with GDDR6 memory offering 20Gbps of throughput. The RX 7900 XT uses 5 MCDs with a corresponding 320-bit bus. AMD notes that the RX 7900 XT will still have 6 MCDs mounted, but one is a dummy die that is functionally disabled for assembly and stability reasons.

AMD RDNA 3 Infinity Cache Gets A Major Bandwidth Lift, As Does Perf-Per-Watt

RDNA 3's Infinity Cache has been significantly bolstered in its second generation. AMD indicates that peak bandwidth has been increased by 2.7x over its RDNA 2 implementation to 5.3 TB/s. AMD says it has optimized its caching decisions to maximize hit-rates. Despite actually having less cache than RDNA 2 (96MB vs 128 MB), AMD claims that its tweaks enable hit-rates to remain the same, while the smaller cache helps to reduce power consumption. 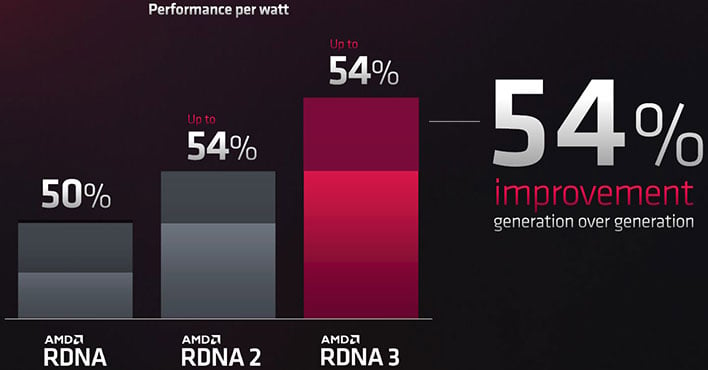 AMD reiterated its commitment to power efficiency several times during the presentation. Overall, the company is claiming RDNA 3 delivers 54% better performance per watt than RDNA 2, which provided a 54% improvement over the original RDNA architecture in-turn. This focus on efficiency plays into decisions like choosing GDDR6 memory over the higher-bandwidth GDDR6X RAM that NVIDIA uses on some of its top end GeForce cards.

On the compute side, AMD has increased transistor count by 54% while using less area compared to RDNA 2, which yields 165% more transistors per square millimeter. By implementing dual-issue SIMD units, AMD has effectively doubled instructions per clock. We look forward to learning more about how AMD is parallelizing workflows to take advantage of this feature.

AMD has also decoupled its front end and shader clock rates. The front end ticks away at 2.5 GHz while the shaders work with greater power efficiency at 2.3 GHz. AMD claims the slightly lower shader clocks allow for 25% power savings.

RDNA 3’s raw compute performance is touted at 61 TFLOPS which is nearly a 3x increase over RDNA 2. This is accounting for the Radeon RX 7900 XTX’s full complement of 96 compute units. As with memory, the RX 7900 XT is cut down by one-sixth to 84 compute units. Don't make direct comparisons to Navi 21's 80 compute units, though, because RDNA 3's compute units are twice as wide, giving them 128 shaders each.

All of this increased bandwidth and resources translates to what AMD claims is up to a 1.7X uplift in performance for the Radeon RX 7900 XTX versus its previous gen Radeon RX 6950 XT card in high resolution gaming. This could put the card within striking distance of NVIDIA's GeForce RTX 4090 possibly, but it's hard to say until we get cards in for testing. Regardless, gamers will appreciate the Radeon RX 7900 XTX's price point versus NVIDIA's $1600 top-end beast.

FidelityFX Super Resolution (FSR) was a solid improvement over simple bilinear upscaling techniques, but it paled in comparison to competing temporal upscalers. FSR 2, especially in its recent revisions, goes a long way toward closing that gap, but its competitors weren't sitting still. 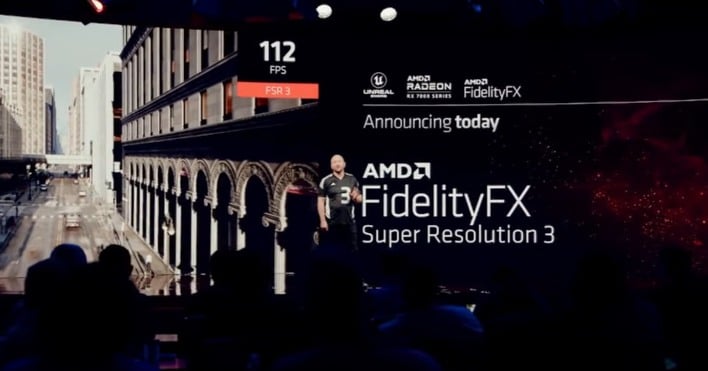 Of course, neither was AMD. FSR 3 apparently combines FSR 2's temporal upscaling with a new "AMD Fluid Motion Frames" technology to give as much as double the performance over FSR 2 alone. In the Q&A after the presentation, AMD clarified that it is an image generation technology, making it rather similar to NVIDIA's new DLSS 3 that it unveiled with the GeForce RTX 4090. AMD says that FSR 3 is specifically targeted at gamers playing with the highest visual settings, which makes sense considering that frame generation can often shift the bottleneck of processing back over to the CPU.

The RDNA 3 architecture also includes two dedicated AI accelerators per compute unit. AMD has not yet elaborated on the specific AI instructions added or other improvements, but it has noted that these are intended for gaming functions, rather than general purpose AI workloads.

Ray tracing is expected to be about 50% faster than RDNA 2. AMD is implementing new ray box sorting and traversal methods. It is unlikely that this will bridge the gap to challenge the GeForce RTX 4000 series, but improvement is welcome, nonetheless.

DisplayPort 2.1 And AV1 Support - It's In There

Where AMD does have a significant leg up is its Radiance Display engine and corresponding DisplayPort 2.1 support. NVIDIA GeForce RTX 4090 only supports DisplayPort 1.4, for comparison. This allows the Radeon RX 7900 XTX and XT to support 4K displays at up to 480Hz or 8K displays at up to 165Hz. AMD recognizes that gamers are not only interested in AAA titles, and this move may encourage esports competitors in particular to finally upgrade from 1080p FHD class displays.

AMD is also bringing feature parity for video creators with AV1 encoding and decoding engines. AMD’s implementation supports up to 8K60 AV1 encode, and it can perform simultaneous encoding and decoding of AVC and HEVC should the need arise. AMD’s AV1 engine will be supported in OBS on supported platforms, which mostly means YouTube at this time, but hopefully more will follow suit. 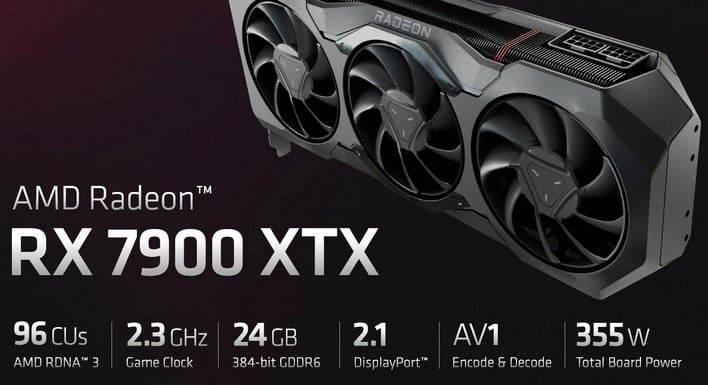 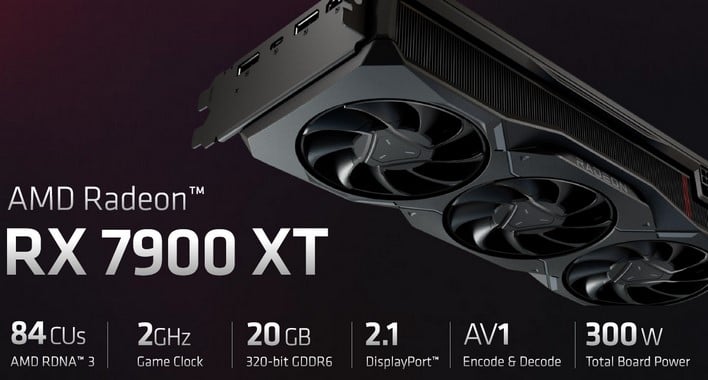 The Radeon RX 7900 XT is a touch lower still at 300W. AMD proudly points out that these cards use dual 8-pin power connectors so there’s “no need for a new power adapter” in a swipe at NVIDIA’s 12VHPWR headaches. 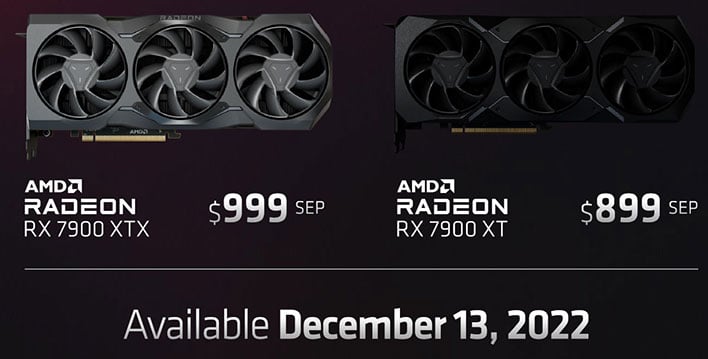 Now for pricing. The Radeon RX 7900 XTX will be priced at $999.99 and the Radeon RX 7900 XT will slot in slightly lower at $899.99. It is curious to see only a $100 price delta between these two models, as it leaves little room for AIB partners to slot in RX 7900 XT models with better tuning in-between. It also arguably makes the XTX the better value if performance scales linearly with CUs and MCDs, though that remains to be seen. 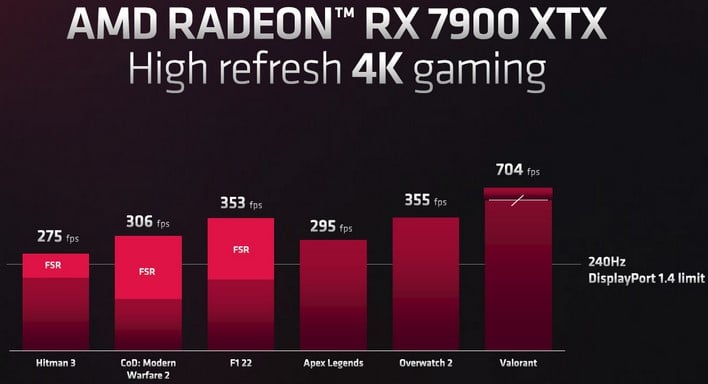 The cards are both slated for availability on December 13th, 2022. Barring any unforeseen circumstances, we should see partner designs start to become available at this time as well. AMD says it expects good supply through December and into 2023, so with any luck it will not be too difficult to secure one of these cards.