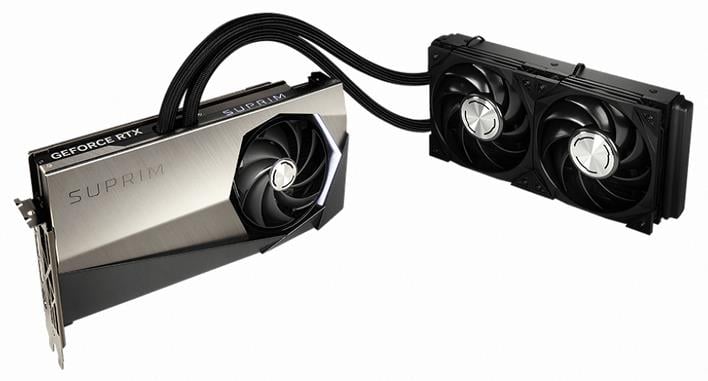 If you follow the GPU space at all, over the last few weeks you will likely have seen an array of interesting, and sometimes massive, third-party GeForce RTX 4090 cards. While NVIDIA’s Founder’s Edition is only slightly wider than the previous-gen RTX 3090, some of NVIDA’s partners have gone buck-wild, and produced gargantuan, slot-crushing, PCB sagging beasts. While MSI does have some beefy air-cooled RTX 4090s coming down the pipe, the RTX 4090 Suprim Liquid X we’ll be showing you here today takes a different approach. As its name suggests, the MSI GeForce RTX 4090 Suprim Liquid X is (mostly) water-cooled and features a standalone AIO setup pre-installed on the GPU and memory. The whole assembly still requires some special accommodations inside a chassis, but the card itself is much smaller in every dimension over the Founder’s Edition and most other partner boards, and it offers another additional advantages too.

Check out the MSI GeForce RTX 4090 Suprim Liquid X’s in our quick unboxing video, check out the specs, and then we’ll dig in a little deeper and see what the card can do. Quick tease: this one’s a barn burner… 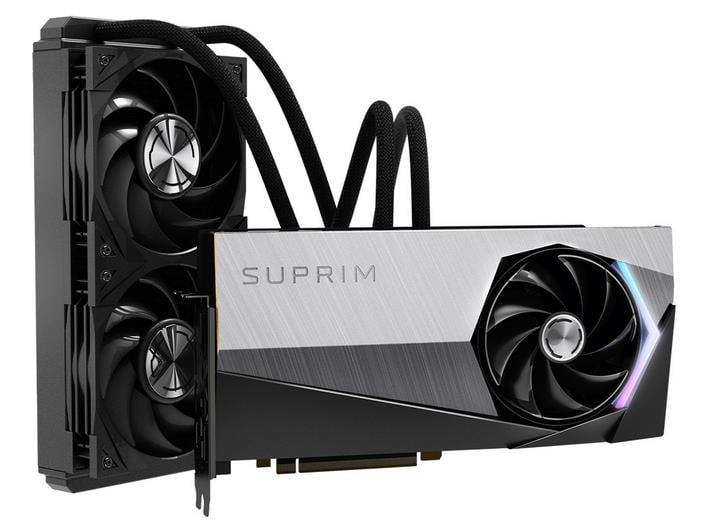 The MSI GeForce RTX 4090 Suprim Liquid X can actually operate in three different modes. There is a dual-BIOS switch on the top edge of the card that gives users the ability to choose between “Gaming” and “Silent” modes (which boost up to 2,625MHz) and if you install the MSI Center app, and “Extreme Performance” mode is also available that allows the card to boost up to 2,640MHz. In practice, all of these modes performed similarly, though the fan speed curve is somewhat more tame in Silent mode. Even still, the MSI GeForce RTX 4090 Suprim Liquid X is super-quiet in Gaming mode and the GPU runs exceptionally cool – there’s really no reason to run in Quiet mode in our opinion. And even without MSI Center installed, we routinely saw boost clocks much higher than the rated specs. As thoughtful as it is that MSI provides users some choice regarding clocks and cooling, the overall experience isn’t much different between the modes being offered. 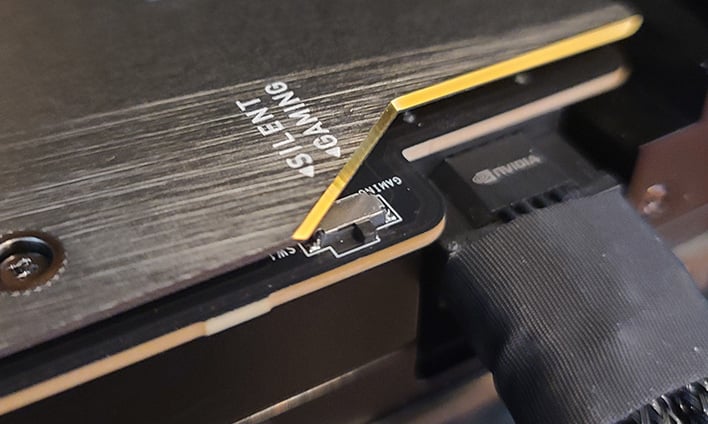 The MSI GeForce RTX 4090 Suprim Liquid X card measures 280 x 140 x 43 mm and the 240mm radiator and fan assembly are 274 x 121 x 55 mm. The sleeved tubing is 11.2 mm in diameter and is about 470mm in length (or roughly a foot and a half). All told, the card is much more manageable than any air-cooled GeForce RTX 4090 we’ve seen. Obviously, the radiator will require mounting in a couple of fan locations and your chassis will need to have the space for it, but just about any modern enthusiast-class chassis should have the necessary accommodations. In terms of actually setting it all up, however, there’s nothing special required – the AIO cooler and card are all powered by the slot and 12-pin power connector. There are not additional power feeds or fan connections necessary. Like NVIDIA, MSI also included a 4 x 8-pin PCIe power adapter with the card, that’s kind of unruly, but next-gen power supplies with the mini 12-pin feed are coming that will eventually negate the need to use the adapter. 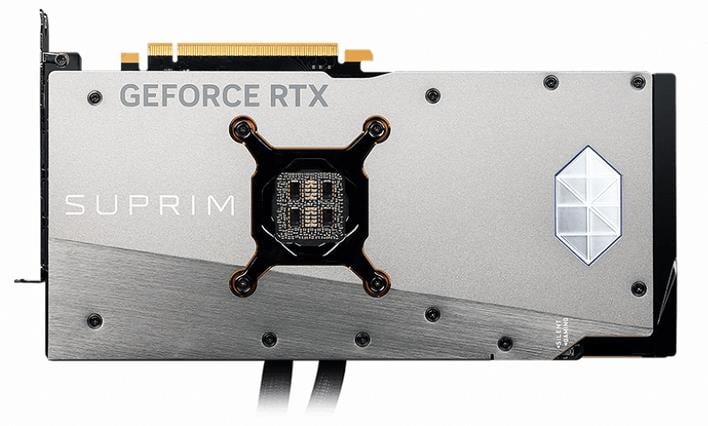 The liquid-cooler consists of a micro-fin copper base and black, aluminum radiator. Two 120mm fans are preinstalled on the radiator and there is and additional fan on the card, along with some heatsinks to help cool the VRM. All told, this cooling assembly works great for the RTX 4090. The fans spin down completely when idle or under a light load, and even when fully loaded for long durations, the MSI GeForce RTX 4090 Suprim Liquid X remains cools and quiet. As you’ll see a little later, temperatures on this card are far lower than NVIDIA’s Founder’s Edition.

The physical design of the MSI GeForce RTX 4090 Suprim Liquid X features lots of silver, textured / brushed aluminum and sharp angles. There’s a full aluminum backplate on-board that adds rigidity and aids in cooling, and configurable RGB lighting shines through the one side of the fan shroud and through a diamond-shape cutout at the rear. It’s a good looking setup overall, if you dig AIO liquid cooling setups for GPUs.

With all of that out of the way, what do you say we see how this card performs?
NEXT PAGE