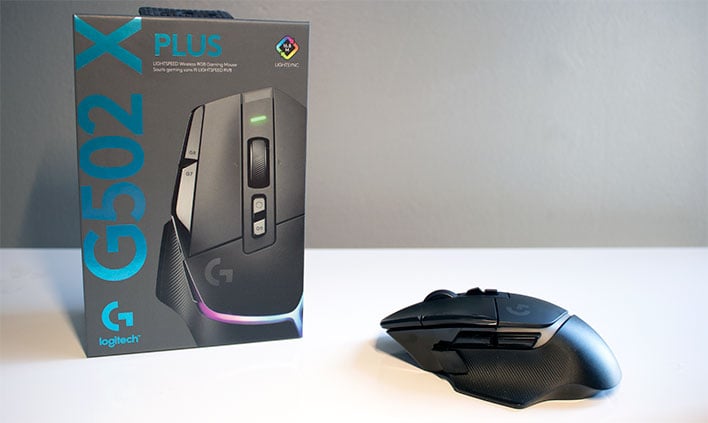 For the past five years, I’ve been gaming, working, and knocking around Windows with Logitech’s G502 Proteus Spectrum, a wired mouse with a lot going for it and one of a handful of variations in the popular G502 family. It was a Black Friday purchase and I haven’t looked back. Well, until now. Logitech has refreshed its G502 lineup with the G502 X, available in three trims: G502 X (wired), G502 X Lightspeed (wireless), and G502 X Plus (wireless + RGB lighting). It’s the G502 X Plus model that I have my hands on for this review and spoiler alert, it’s a worthy iterative upgrade.
It’s also not perfect, but it registers way more hits than misses, both on its list of features and specifications, and in actual usage. Some of the welcome updates are underneath the hood. Combined with some external tweaks, Logitech says it “reinvented and redesigned” the iconic G502, but it’s more of a wholesale refinement. That’s not a bad thing, given that Logitech already had a winning formula on its hands. 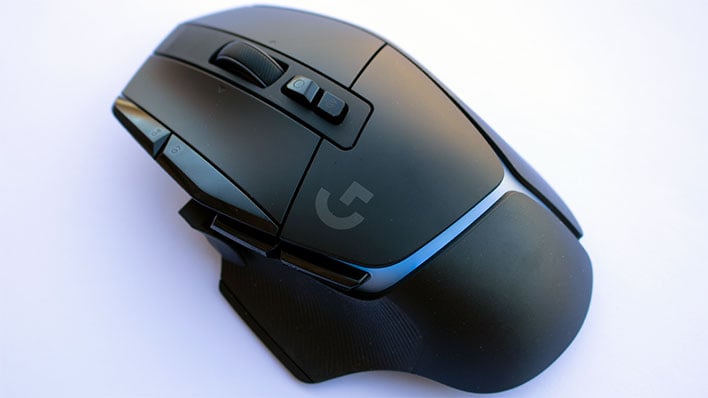 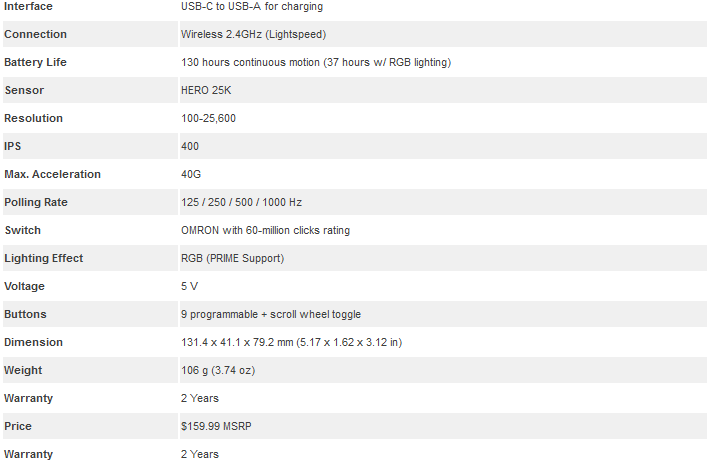 Logitech first began employing its upgraded HERO 25K sensor in high-end mice two years ago and it remains the company’s flagship offering. A surprisingly informative marketing video details the general concepts of a mouse sensor, and what makes the HERO 25K so special…

According to Logitech, the HERO 25K is the first sensor capable of accurately tracking movement at a sub-micron level with no smoothing, filtering, or acceleration gimmicks. Not that gamers truly require a 25,600 DPI to play competitively. In reality, you don’t need your mouse to track anywhere near 25,600 dots per inch to be effective at your favorite first-person shooter or any other gaming genre. But like the speedometer in your car, it’s nice to know what your engine is capable of.
Beyond the fast and fancy HERO 25K sensor, this is a wireless mouse that pairs to an included 2.4GHz dongle (USB Type-A). This uses the Logitech Lightspeed protocol and allows you to connect a second compatible device to the same receiver. So for example, if you own a Logitech G915, G915 TKL, or G715 gaming keyboard, you don’t have to sacrifice a second USB port on your PC. 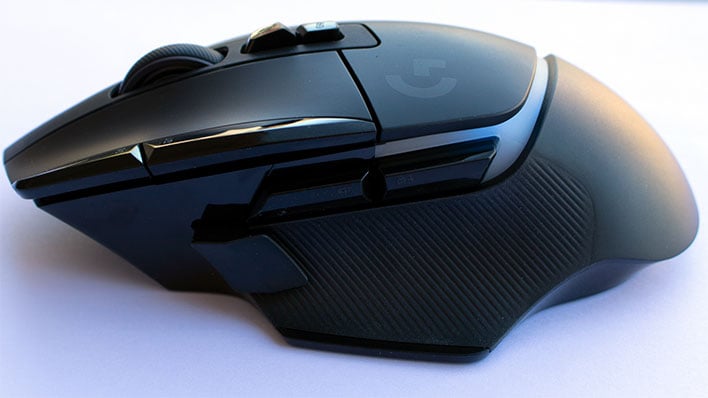 The overall shape of the G502 X Plus is similar to past iterations. Logitech revised the design language in a few places though, such as closing off the gap between the top of the left and right mouse buttons, but stylistically it’s very similar.
That means it’s also similar from an ergonomic standpoint, at least in the shape and layout. However, Logitech has abandoned the adjustable weight system for a relatively light and nimble shell—the G502 X Plus weighs 106 grams (3.74 ounces). That’s down from 121 grams on its predecessor (G502 HERO), which also bundles five 3.6-gram weights for up to an additional 18 grams of heft.
I don’t personally miss this feature, but I suspect some gamers will. It’s also a curious decision on Logitech’s part in that the net result is not a mouse that can claim to be the lightest on the market (though it’s certainly lightweight). 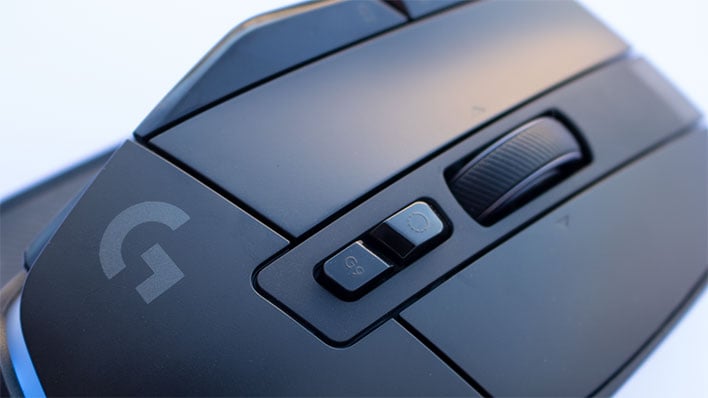 One standout feature that did remain, however, is the excellent “dual-mode” scroll wheel. Like the majority of mice on the market, you can spin the wheel in stepped increments in ratcheted mode. But with the click of a button, you can switch to a hyperfast mode to unlock a free-spinning scroll. It takes some getting used to, but it’s one of those features that I would be loathed to give up. It’s a game-changer for zipping through websites and long articles—just give it a flick and off you go.
Of course, it also functions as a mouse button (with left and right tilt), and joins an array of controls. Counting the middle click of the scroll wheel, there are nine programmable buttons. By default, three of those adjust the DPI (up, down, and shift), and another is used for cycling through custom profiles. The aforementioned scroll wheel toggle is technically another button, but it’s not programmable.
Beneath the surface, Logitech has upgraded its G502 X mice with its new Lightforce switches. These are hybrid optical-mechanical switches that use “galvanic contact parts” to help deliver a satisfying ‘click’ with each button press. I didn’t find clicking the main buttons to be markedly more satisfying than on my G502 Proteus Spectrum, but I do slightly prefer the feel of the G502 X Plus. Logitech’s also claiming ultra low latency optical actuation, for a response time that’s 68 percent faster than the previous generation. 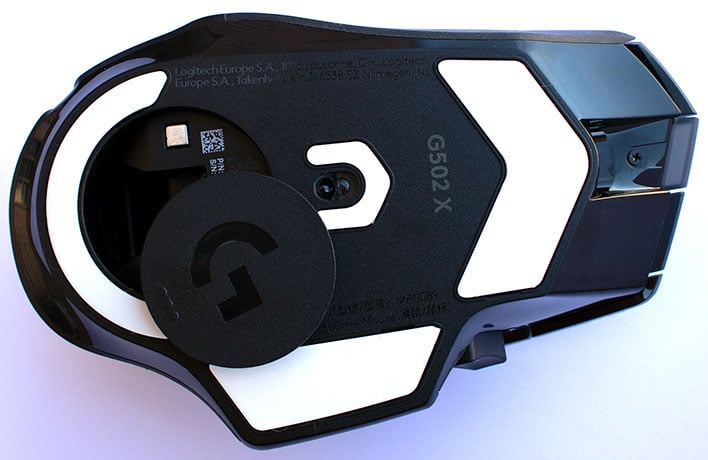 Underneath the mouse is an easily accessible storage compartment for the wireless dongle. It also houses a rubber cover that you can install in place of the side-mounted (and reversible) DPI shift switch. If you have larger hands, you may find that the DPI shift switch gets in the way, and this solves that (albeit at the expense of having a button to temporarily use a different DPI setting). I didn't have any issues bumping into it and didn't feel the need to install the cover, but I also have smaller hands.

The on/off switch is also located on the mouse’s underbelly, as are the smooth PTFE feet for easy gliding.
What’s not visible is the wireless component. Logitech claims a generous 130 hours of continuous motion per charge, or 37 hours with RGB lighting turned on. An included USB-C (mouse) to USB-A (PC) cable lets you keep the gaming party going if you run out of juice, and charges the mouse too (Logitech also includes a USB-A to USB-C adapter in case your PC or laptop only has USB-C connectivity, or if you simply prefer to go that route).

Alternatively, the G502 X Plus and G502 X Lightspeed are compatible with Logitech’s Powerplay wireless charging system. This is essentially a charging mousepad that continuously charges your rodent, so that it never dies. That costs $119.99 and takes up another USB port, but is worth considering if you don’t want to worry about ever having to charge your mouse. 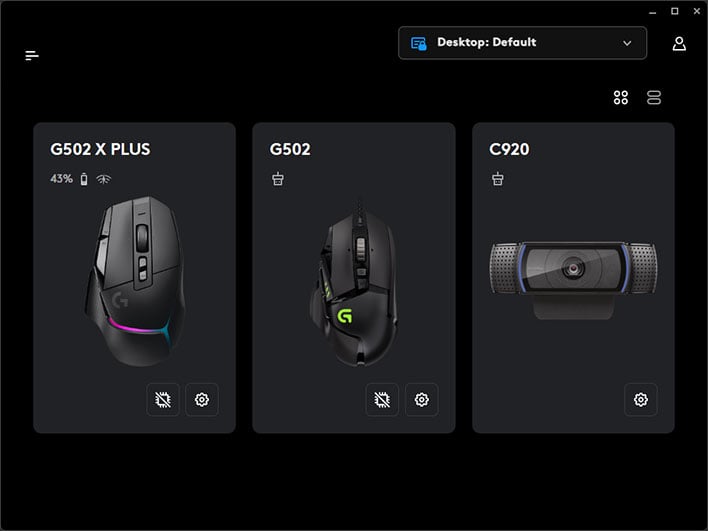 Not all software utilities are created equal, and Logitech’s G Hub software is, quite frankly, intuitive and extremely easy to navigate. It’s also a one-stop destination for customizing multiple compatible devices, as can be seen in the screenshot above. 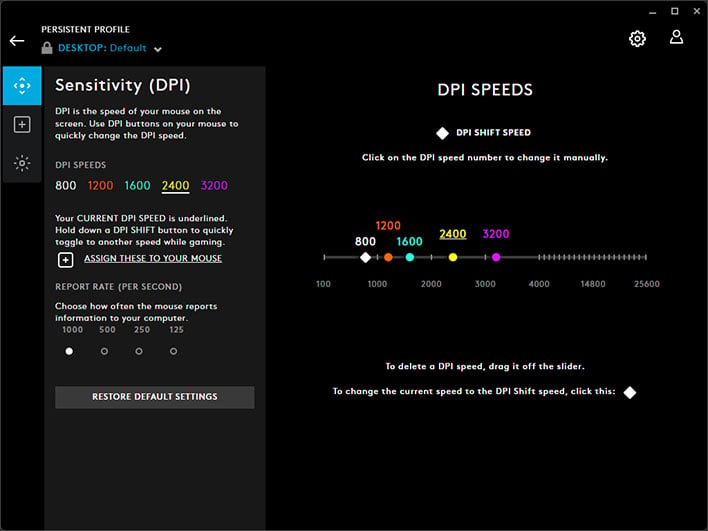 There are three main listings for configuring the G502 X Plus, the first of which is the sensitivity portal. Here is where you can input up to five DPI settings, four of which you can cycle through and one of which you can temporarily engage when using the DPI shift button. You can also adjust the report rate, if you wish. 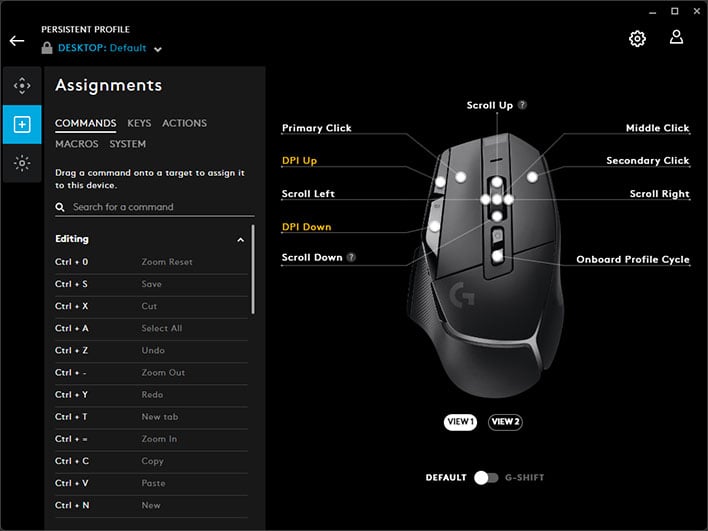 The next menu down is the assignments category. There is quite a bit you can do in this menu, such as customize the button actions, configure macros, assign editing commands (like Ctrl+S) to different buttons, and so forth. 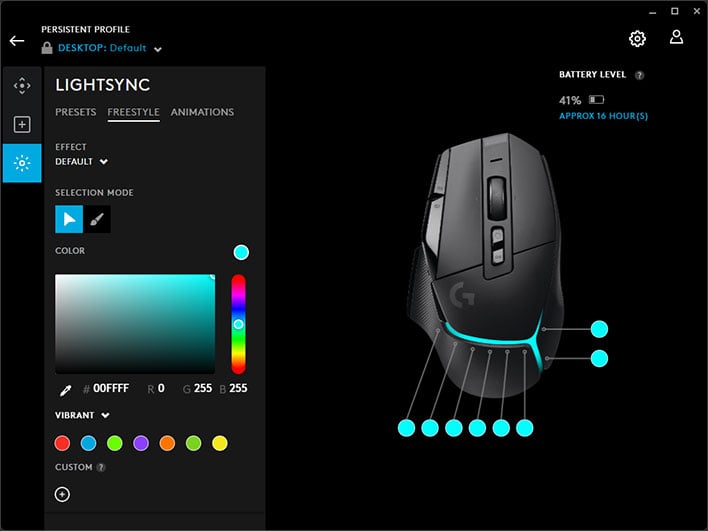 Finally, the lightsync menu is your portal to customizing the RGB lighting on the G502 X Plus. There are over half a dozen preset effects to choose from (Fixed, Cycle, Breathing, Color Wave, Pulsar Point, Screen Sampler, and Audio Visualizer), as well as a freestyle tab to make your own and an animations tab to adjust the speed of the effects.
One thing worth noting is that you can also adjust how long the RGB lighting stays on and the mouse active when not in use. Having it turned off when idle helps extend the battery life. 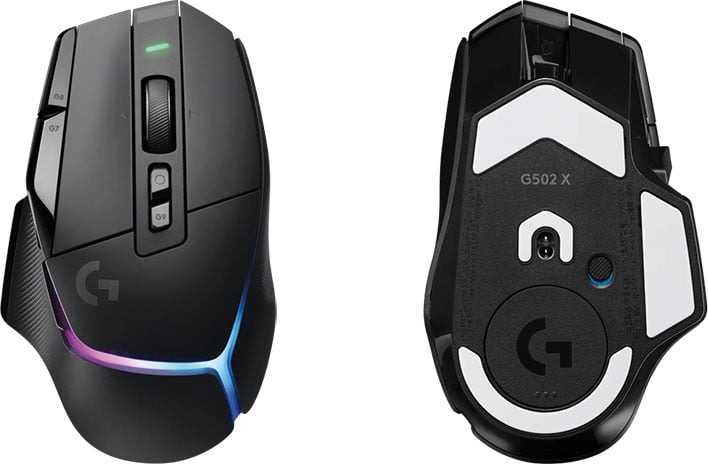 Straight to the point, Logitech’s G502 X Plus is an excellent wireless gaming mouse that is comfortable, customizable, and wireless for navigational freedom with the performance of a wired model. Clicks and movements register without any perceivable or notable lag, and the Hero 25K sensor can accommodate sensitivity levels far beyond what anyone might realistically need, especially for gaming.

Battery life is a big plus, too, if you’re willing to turn off the glowing LEDs—130 hours of continuous movements amounts to five days of non-stop usage. Turning on the lights knocks that down to 37 hours, or around a day and a half. Again, we’re talking about non-stop usage though. An optional Powerplay mat makes battery life a non-factor altogether, though that means spending an additional $119.99. That's on top of the $159.99 asking price for the G502 X Plus ($139 on Amazon), which puts this mouse squarely in premium pricing territory. 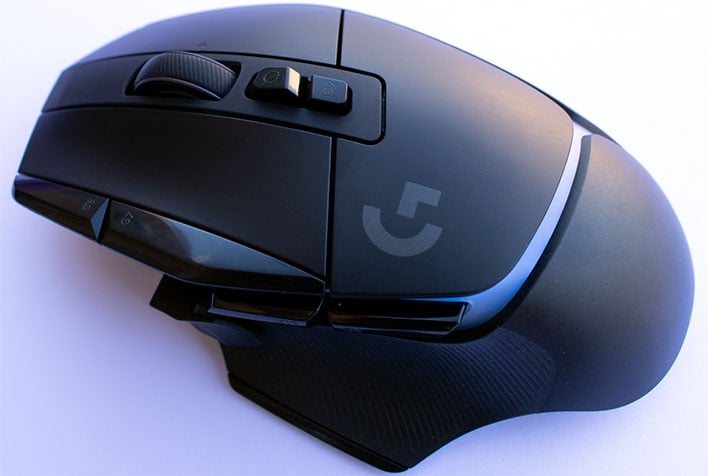 From a design and functionality standpoint, the only real knock I have is the absence of an adjustable weight system. Mouse makers are tripping over themselves bringing lighter models to market, many of them with unsightly holes in the shell to shave off a few grams (a design I’m not personally found of). The popularity of these mice may have influenced Logitech’s decision. Whatever the reason, if you prefer a heftier mouse, this isn’t it.
That said, the G502 X Plus is nimble and agile. It’s lighter than the G502 Proteus Spectrum I’ve been using for several years, but it didn’t take me long to get used to the feel. Combined with the excellent sensor and versatile customization, it’s easy to recommend the G502 X Plus for gamers and power users looking for a high-end mouse.