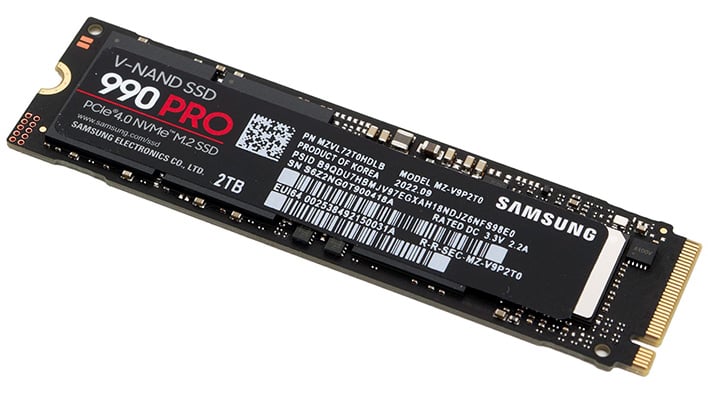 Samsung was relatively early to the PCI Express Gen 4 NVMe SSD party with its 980 Pro series of drives, which we reviewed way back in September 2020. While that drive was speedy in its day, the Samsung SSD 980 Pro was quickly eclipsed by faster PCIe Gen 4 drives based on Phison or Innogrit controllers, like the Kingston KC3000 (Phison) or Adata XPG S70 (Innogrit), among others. In the interim, Samsung released handful of more mainstream, affordable SSDs, but in August the company announced its latest enthusiast-class solid state drives, the Samsung SSD 990 Pro. 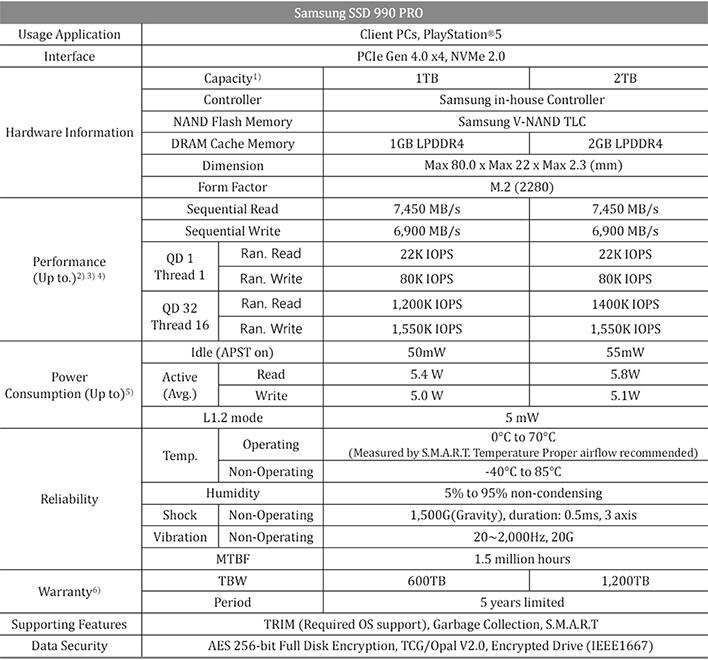 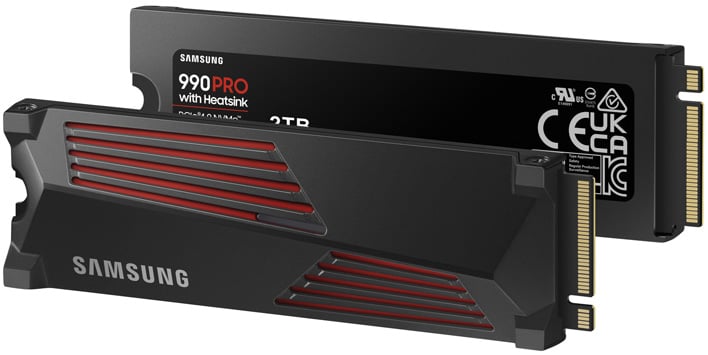 Samsung SSD 990 Pro Gen 4 drives will initially be offered in two capacities—1TB and 2TB—and in two flavors, with and without an integrated heatsink. A 4TB model is also planned, but won’t be arriving until next year. We will be featuring the 2TB model without heatsink in this evaluation.

All of the drives in the Samsung SSD 990 Pro series use the common M.2 (2280) ‘gumstick’ form factor, but the performance between the different models varies slightly depending on their capacity. Both capacities will offer similar sequential transfers, of 7.45GB/s (read) and 6.9GB/s (writes), and similar IOPs at QD1 (Queue Depth), but at QD32 the 1TB model will have somewhat lower (but still good) random read performance.

The Samsung SSD 990 Pro drives’ max IOPS ratings vary depending on queue depth, but peak at right around 1,200K – 1,550K at QD32. The drives’ endurance ratings also vary based on capacity, as you would expect, with the 1TB drive landing at the 600TBW mark and the bigger 2TB drive hitting 1200TBW, which is similar to the 980 Pros, but actually lower than the older 970 Pro series.

The drives are also outfitted with a new controller. In addition to the native PCI Express 4.0 interface, the controller is manufactured on Samsung’s leading-edge 8nm process and reportedly offers a nearly 50% improvement in performance-per-watt. According to Samsung, the 980 Pro offers sequential Read / Write performance of 1,129MB / 877MB per watt, whereas the new 990 Pro can hit a sequential Read / Write of 1,380MB / 1,319MB per watt based on internal testing of the 1TB model.

The Samsung SSD 990 Pro’s controller supports all of the features you’d expect from a modern SSD, like TRIM, garbage collection, S.M.A.R.T., etc., in addition to various encryption technologies. Depending on the capacity, the first wave of drives also feature 1GB or 2GB of discrete LPDDR4 DRAM cache, with the 2TB drive packing the maximum config. The 4TB drive that's coming later will have a 4GB LPDDR4 DRAM cache. 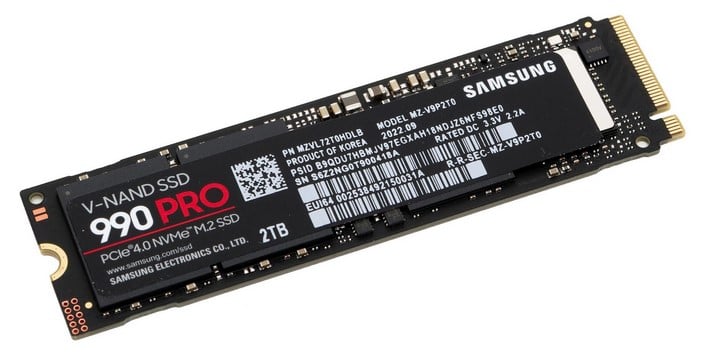 Like the last couple generations of Samsung Pro SSDs, the controller has a nickel coating that helps to dissipate heat and the underside of the drives has a thin plate hidden underneath the decal to aid in cooling. The drives also support Samsung's Dynamic Thermal Guard, which helps manage power and thermals based on the drives' workload to minimize any potential throttling.

Samsung SSD 990 Pro drives also feature TurboWrite technology, similar to Samsung EVO-branded drives. TurboWrite uses a portion of the drive's V-NAND as an SLC write buffer, which results in improved write performance, as long as the buffer isn’t exhausted. As was the case with previous-gen drives, the TurboWrite buffer dynamically adjusts in size based on the workload. 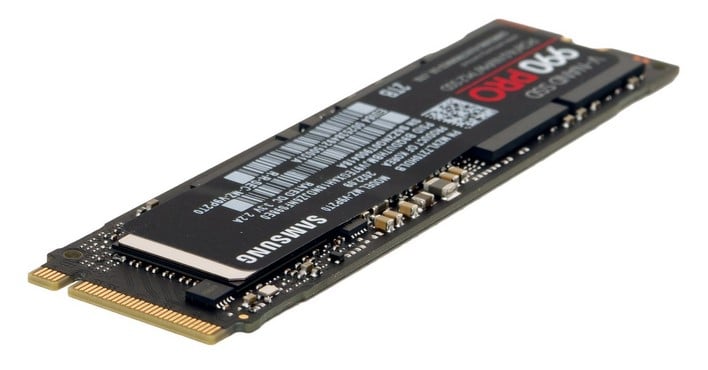 TurboWrite will also allow the Samsung SSD 990 Pro drives to perform well in the vast majority of consumer-class workloads, because writes are fastest when the SLC buffer is being utilized. Once the buffer is exhausted, write performance can taper off, but on the 2TB drive we tested, the SLC cache is flushed fast enough to maintain strong write performance across the entire capacity of the drive. 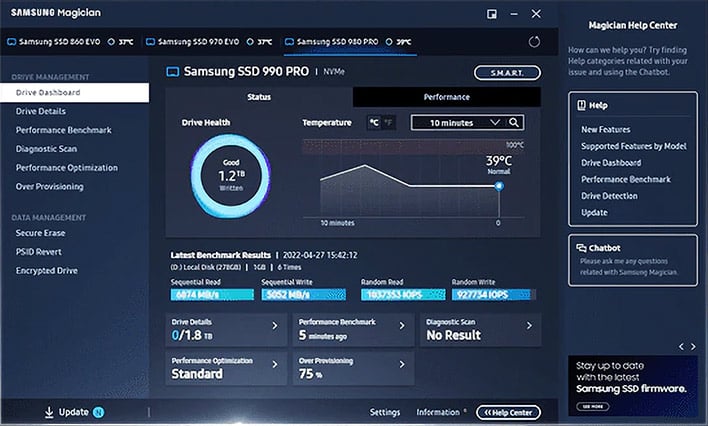 Samsung warranties the SSD 990 Pro series drives for 5 years, which is in-line with previous-gen offerings, and the drives are also supported by Samsung’s Magician SSD management utility. Anecdotally, in all of the years we have been evaluating Samsung SSDs, we have yet to have one fail. Every one of the Samsung drives we have on hand, including much older SATA-based solutions, are still functional, for what it's worth. 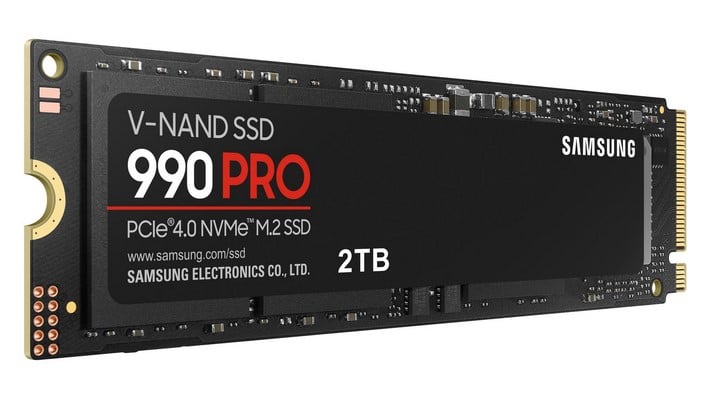 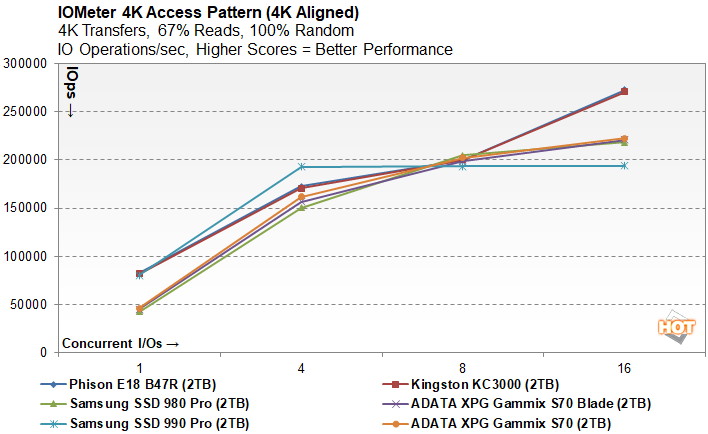 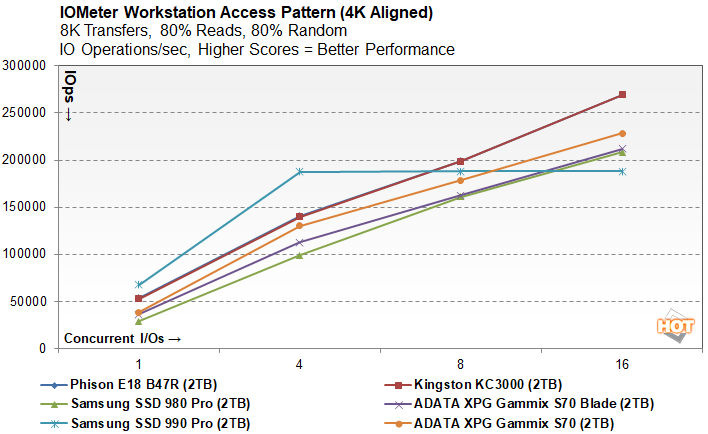 At the lower queue depths, the Samsung SSD 990 Pro led the pack, but performance plateaued beyond QD4 and the other drives pulled ahead at the higher queue depths. Note that for consumer workloads, the lowest queue depths are most important, so the 990 Pro is in good shape here.

These numbers represent the average bandwidth for the drives we tested with both access patterns, across every queue depth. The Samsung SSD 990 Pro significantly outpaces the older 980 Pro and beats the Innogrit-based Adata drives, but the Phison-based drives come out on top. 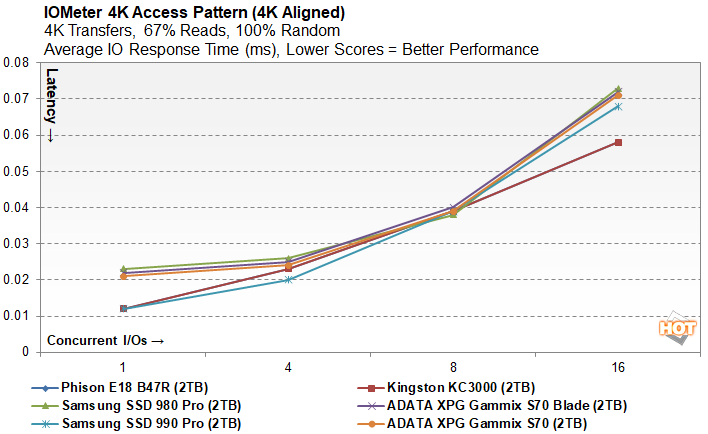 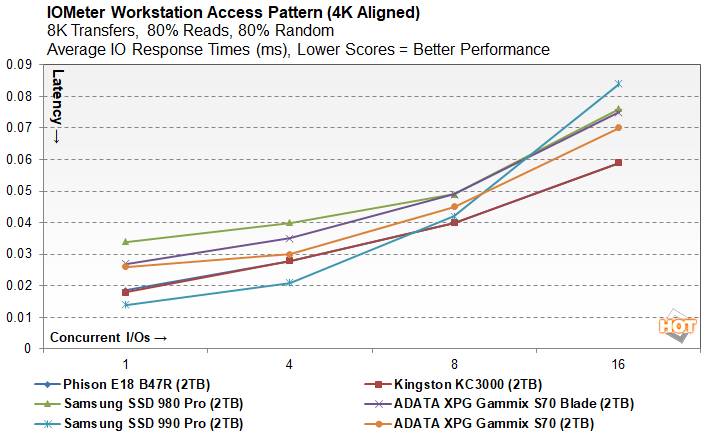 Our latency results also show the Samsung SSD 990 Pro offering some of the lowest (best) latency at the lower queue depths. It's only at the highest queue depth (QD16) that the 990 Pro's latency trails the other drives. 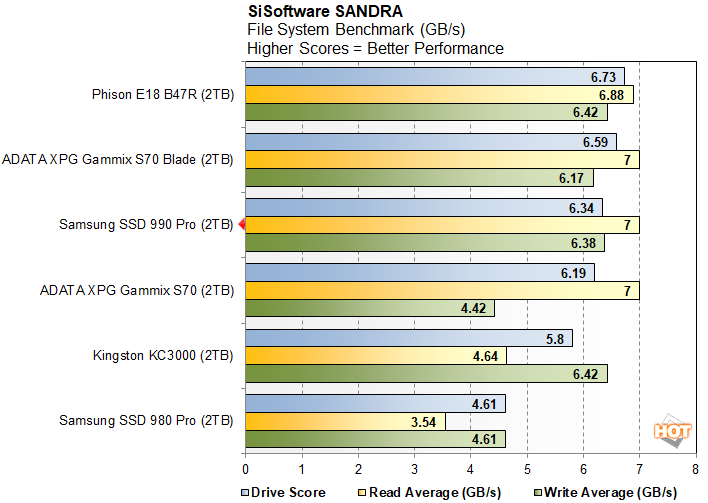 The SANDRA file system benchmark has the top three drives offering similar read averages, with the Samsung 990 Pro landing right in between the Phison and Innogrit-based drives in terms its write average. Once again the 990 Pro clearly outruns Samsung's previous flagship 980 Pro across the board. 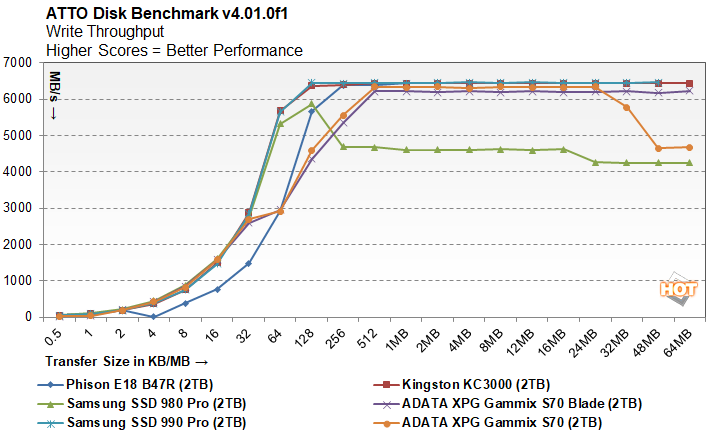 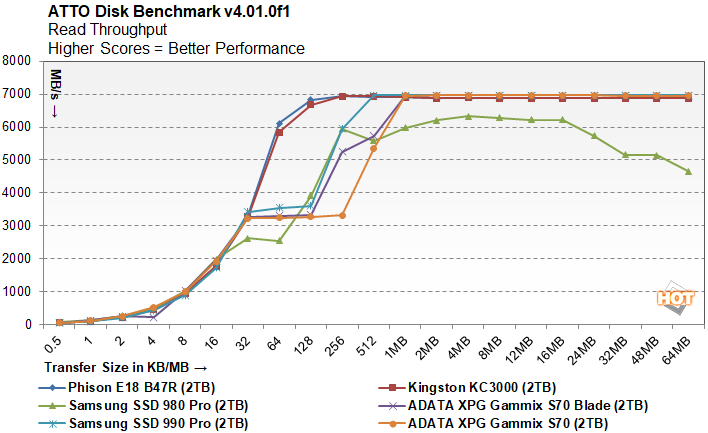 Save for a dip with 64MB - 256MB block sixes in the write test, the Samsung SSD 990 Pro hangs with the fastest drives we tested according to ATTO. 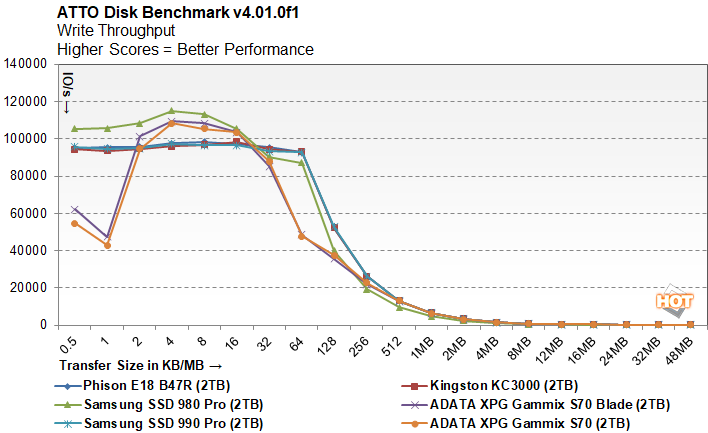 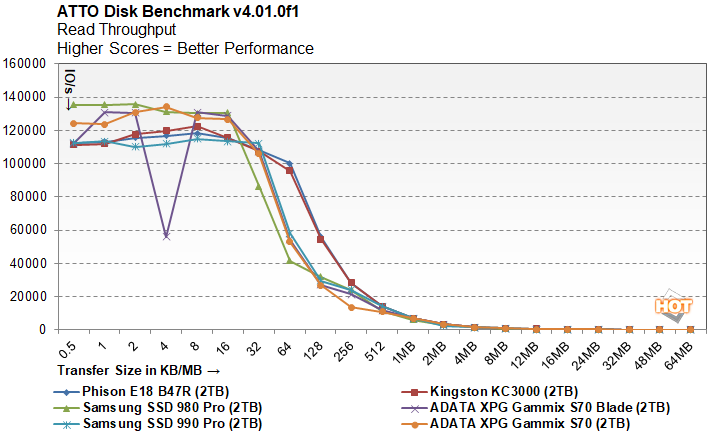 IO performance according to ATTO had the Samsung SSD 990 Pro right in the mix with all of the other drives, though it does trail slightly in the read tests with the smallest transfer sizes. 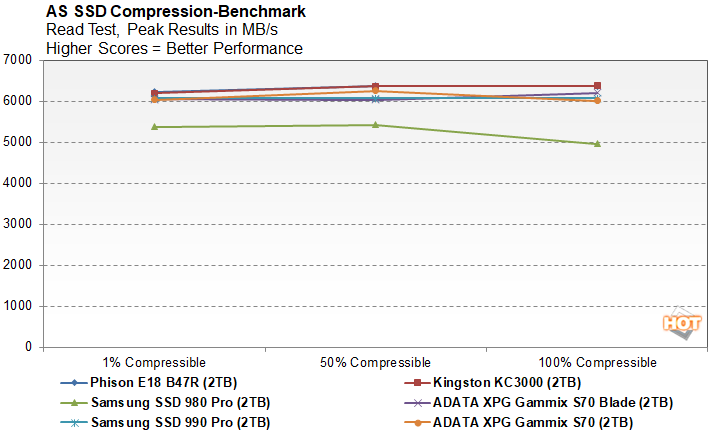 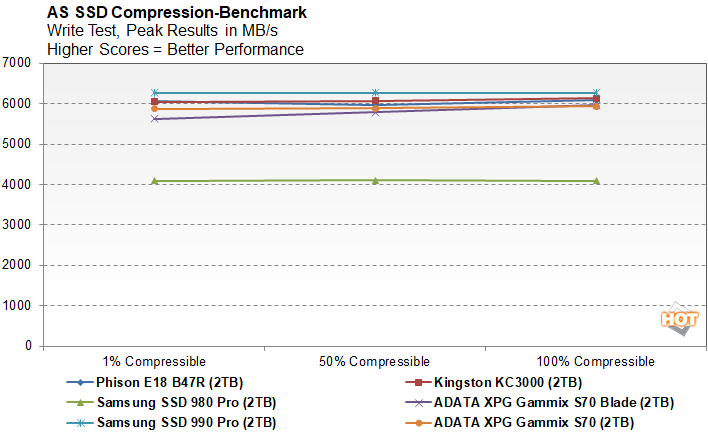 The compressibility of the data being transferred across the drives has minimal impact on performance and the Samsung SSD 980 Pro performed well overall. In the read test, the 990 Pro is right in the mix with the other drives, but it leads slightly in the write test.