AMD Radeon RX 7000 Series: When RDNA 3 May Release To Retail And What To Expect

AMD’s next generation of graphics cards will be available to the public starting from early December, according to a seasoned Twitter based technology leaker. Such a timescale is quite believable, as it would mean availability would begin more or less a month after an officially scheduled Radeon RX 7000 RDNA 3 launch event.
The Twitter source in the spotlight, called Greymon, previously advised that the AMD Radeon RX 7000 series of graphics cards would begin to become publicly available around November 27. However, when quizzed by tech site VideoCardz earlier today, Greymon revised his estimate regarding the timing.

“It should be sometime between December 1-5,” wrote Greymon, when asked for any hardware release schedule updates. He had earlier flagged that the release date had been pushed back by a week since his previous statement regarding timing. Interestingly, this new date range still doesn’t tally very closely with China’s Chiphell based leaker, whose name roughly translates as Enthusiastic Citizen. The Chinese social media user, with a decent track record for these things, recently said consumers would have to wait until the later part of December to get hands on AMD’s latest and greatest GPUs. Of course, we would prefer a shorter gap between launch and availability.

While we wait for AMD’s official live-streamed unveiling of the first RDNA 3 GPUs (next Thursday), where we will surely get a rollout schedule, it is worthwhile doing a quick recap on what the Radeon RX 7000 series is expected to deliver. 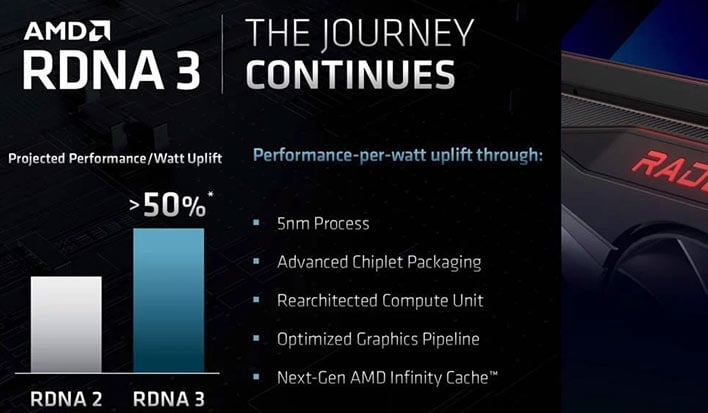 Officially, the upcoming GPUs will deliver “new levels of performance, efficiency and functionality to gamers and content creators.” AMD backed up these claims with a not very detailed slide which touted technological benefits such as the 5nm process, advanced packaging technology, next gen Infinity Cache and more. Additionally, it boldly claims that RDNA 3 GPUs with their re-architected compute units (CUs) will deliver at least 50% better performance per watt compared with RDNA 2.

It is pretty certain that AMD will follow the usual playbook of releasing high-end halo products first, but we hope it can quickly follow up with the more affordable GPUs which make up the majority of graphics cards in use according to hardware surveys like those published by Valve (Steam).