A couple of weeks back, during the GTC 2022 keynote, NVIDIA CEO Jensen Huang unveiled the first salvo of GeForce RTX 40 series cards based on the company’s cutting-edge Ada Lovelace GPU architecture. Three cards were unveiled, all based on different slices of silicon, the GeForce RTX 4080 12GB (AD104), the RTX 4080 16GB (AD103), and the top-end GeForce RTX 4090 (AD102). The dynamic duo of GeForce RTX 4080s are due to arrive next month, but today – one day before cards are set to hit store shelves – we get to show you exactly what the flagship GeForce RTX 4090 can do, and wow is this thing a powerful beast.

Based on the specifications and new features Jensen revealed, we came into this article knowing that GeForce RTX 4090 was going to be one heck of graphics card. But over and above whatever gaming performance gains come by way of the massive 76B transistor GPU and new architectural efficiencies, many of the key features exclusive to the Ada Lovelace architecture are meant to further boost performance in both gaming and content creation workloads, and enhance the overall gaming experience too.

Here's a quick hands-on tour of a couple of GeForce RTX 4090 cards, one from MSI and the other directly from NVIDIA. After that, we’ll get some particulars out of the way, check out NVIDIA’s Founder’s Edition card, and then we’ll dive in a little deeper and see how the RTX 4090 performs. If times are tight at the moment, we’re going to go ahead and warn you to hide your credit cards right now. When you see what this thing can do, even GeForce RTX 3090 Ti owners are going to be green with envy... 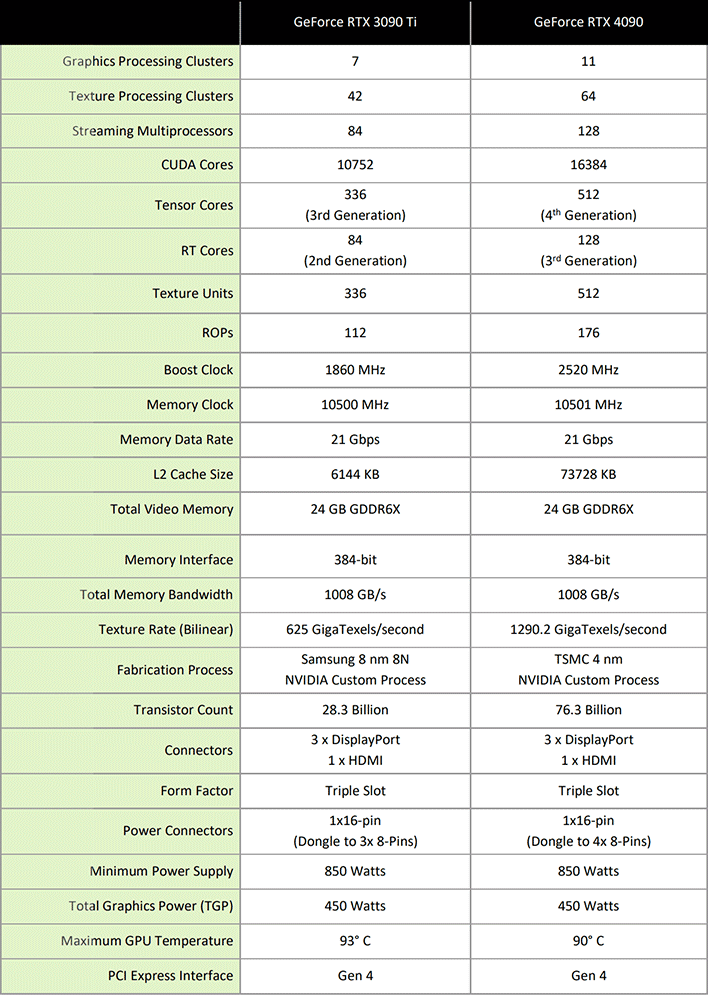 Find NVIDIA GeForce RTX 4090 Cards @ Amazon
Though NVIDIA has branded this card the GeForce RTX 4090, like its predecessor the RTX 3090, it fits into the same category previously held by NVIDIA's Titan RTX and older Titan-branded cards. As such, the GeForce RTX 4090 isn’t solely a product targeted at gamers. Of course, powerful GPUs with thousands of cores, high clocks, gobs of memory, and the latest media engines are typically well-suited to content creation and gaming, so we did some testing across an array of workloads in an attempt to paint a complete picture of GeForce RTX 4090 performance. But we’re getting ahead of ourselves. 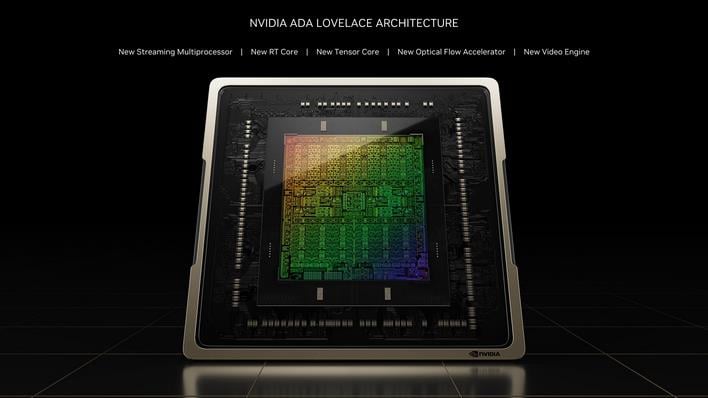 Under The Hood Of Ada Lovelace And The AD102 GPU

Before we go any further, we want to highlight a couple of previous articles:
We have already covered much of the underlying technology at the heart of the GeForce RTX 4090, so we won’t be doing so again here. If you want the full scoop on Ada Lovelace and the new features it brings to the RTX 40 series, we recommend checking out our coverage of the architecture and of NVIDIA’s other GTC 2022 announcements. Once you’ve got all of that meat digested, you’ll better understand what the GeForce RTX 4090 we’ll be showing you here today is all about. 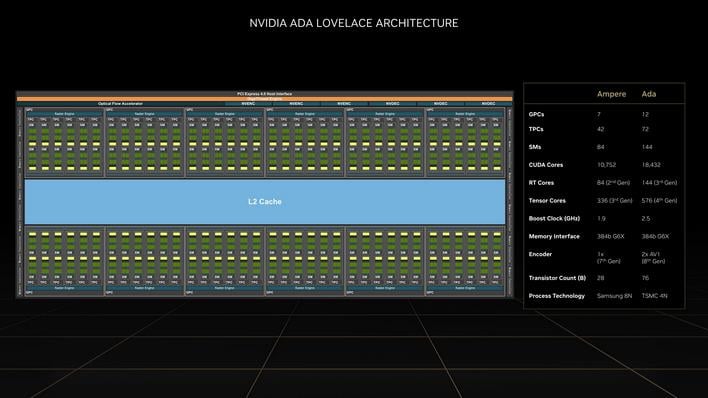 The AD102 on the GeForce RTX 4090 also has a whopping 12× more L2 cache than the GA102, as well as more texture units and ROPs. In addition to having significantly more resources in the GPU, the AD102 further operates at much higher frequencies than the GA102. Whereas the GeForce RTX 3090 Ti offered a typical Boost Clock around 1,860MHz, the GeForce RTX 4090 operates above 2,520MHz and higher, temperatures and power permitting. As such, the RTX 4090’s texture fillrate and peak compute performance are is more than double the RTX 3090 Ti’s. 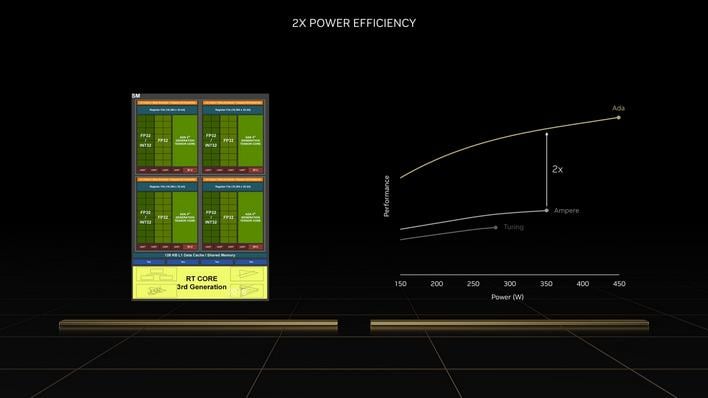 All of those new cores and much larger cache require transistors to build, and the AD102 is definitely on another level over the GA102 in that regard. NVIDIA's Ampere-based, previous-gen GA102 is comprised of roughly 28B transistors, however, the new Ada Lovelace AD102 features a massive jump to over 76 billion. NVIDIA was able to pack in so many transistors by moving to TSMC’s advanced 4N node, versus the custom Samsung 8nm process employed for Ampere. In addition, though it’s packing roughly 3X the transistors, the AD102 is actually smaller than GA102. The AD102 GPU has a die size of 608 mm2 versus 628.4mm2 for the GA102. Keep in mind, the AD102 on the GeForce RTX 4090 isn’t fully enabled – 16 SMs are disabled here. Factor in those 16 additional SMs and a theoretical RTX 4090 Ti would have even more CUDA and RT cores.

The GeForce RTX 4090 does, however, have a similar memory configuration to its predecessors. 24GB of GDDR6X memory is linked to the GPU via a 384-bit memory interface, operating at an effective data rate of 21.2Gbps. That equates to just over 1TB/s of peak memory bandwidth. Though NVIDIA didn’t talk much about any new memory compression technologies, we suspect the much larger caches in Ada reduce transactions out to frame buffer memory, and ultimately improve efficiency as it relates to memory bandwidth utilization.

In addition to increasing cores and cache, those additional transistors were also used to enable many new features in the Ada Lovelace architecture, like Shader Execution Reordering (SER), Displaced Micro-Meshes, Opacity Micro-Masks, FP8 inferencing, a much faster Optical Flow Accelerator, and DLSS 3 with AI Frame Generation. The AD102 also features a new 8th-gen media engine which incorporates dual AV1 encoders along with all of the encoding / decoding capabilities of previous-gen architectures. For details on these features, please check our previous coverage here.

Despite all of the new technology at play here, we should also mention that GeForce RTX 40 series cards like the RTX 4090 are native PCIe 4.0 – not PCIe 5. However, we are still not saturating the current PCIe 4 interface with these graphics cards, so the additional bandwidth that would have been afforded by PCIe 5 probably wouldn’t mean much at this point.

Something new on the cards that is somewhat similar to the RTX 30 series is a small PCIe Gen 5 power connector. This single 12-pin connection is able to scale up to 600 watts for power delivery, and shrinks the overall connector footprint versus existing 6/8-pin PCIe power connectors. NVIDIA includes an adapter with the RTX 4090 that converts a quartet of traditional 8-pin PCIe connectors to the new mini-12-pin design, should you need one, though ATX 3.0 power supplies are also coming down the pipeline that will natively sport the mini PCIe 5.0 connector and are able to supply enough power to beasts like the RTX 4090 through a single cable. We should point out, however, not all of NVIDIA’s board partners have adopted the mini-12-pin connector on their designs; some will stick with full-sized 8-pin connectors on their cards.

In addition to being able to feed the cards with copious power, NVIDIA has also optimized the VRM on the GeForce RTX 4090 for better performance, and the cards’ cooling solution has been optimized to better manage the heat that comes with using all that power. 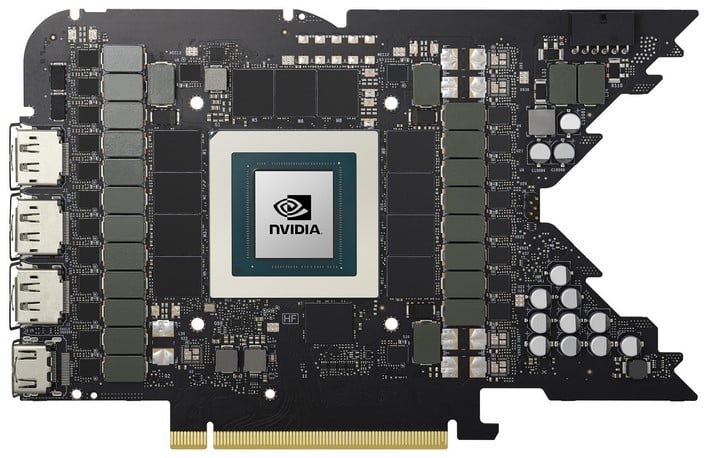 The GeForce RTX 4090’s PCB is outfitted with 23 power phases (20 for the GPU, 3 for the memory). And full PID transient control is supported, for what NVIDIA claims is a 10x increase in power management response times. These advancements allow GeForce RTX 40 series cards to respond to workload demands much faster than previous-gen cards, and overall power delivery should be more reliable and consistent.

Although the cooling solution on the GeForce RTX 4090 looks similar to the RTX 3090’s, it has been internally redesigned. The GeForce RTX 4090 has slightly larger, higher-performing fans, a new vapor chamber design, and a new heatsink layout. The new design results in 20% more airflow and it pulls heat away from the GPU more efficiently, without generating more noise. By using higher density, more power efficient memory (built by Micron on a more advanced process) NVIDIA was able to situate all of the RAM on one side of the PCB. The new cooler design also makes better contact with the memory. All told, memory temperatures should remain roughly 10°C cooler than previous-gen cards and, as you’ll see a little later, the GPU doesn’t get particularly warm either, even after hours of sustained load.

Similar to previous high-end Founder’s Edition cards, the GeForce RTX 4090’s cooler is outfitted with dual axial fans, and it features a split, pass-through heatsink design. The pass-through cooler on the GeForce RTX 4090 is partially enabled by its dense, short PCB. One end of the heatsink is attached to a vapor chamber, that’s mounted directly to the GPU and memory. The fan above that section directs air through the heatsink and immediately funnels it out of the chassis through large vents in the RTX 4090’s case bracket. The heatsink on the back half of the card, which is linked to the front vapor chamber via multiple heat-pipes, allows air from the second fan to pass all the way through the card, where it is propelled upward and is eventually exhausted from a system, assuming it’s got decent ventilation. 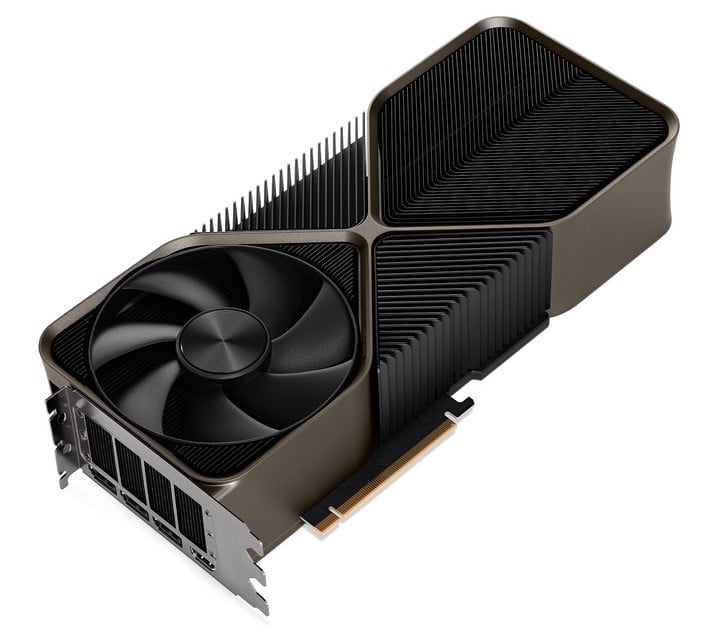 The GeForce RTX 4090 has triple full-sized DisplayPorts (1.4a) and a single HDMI 2.1 output, also similar to previous-gen cards. Ada’s display engine hasn’t been updated significantly versus Ampere, mostly due to timing according to NVIDIA. The Ada Lovelace design was locked in before newer display output standards had been finalized.

In terms of feature support, there’s a lot more to mention like, NVIDIA Reflex latency reduction technology, NVIDIA Broadcast, Ansel, G-SYNC, Omniverse, optional Studio drivers, and GeForce Experience, to name just a few. Almost everything supported by previous-gen cards is also supported by Ada Lovelace and the RTX 40 series – except NVLink. You’ll notice there’s no NVLink connector on the RTX 4090, so traditional SLI setups are no more.

When you see how fast the GeForce RTX 4090 is, however, you probably won’t care...