After literally years of rumors, we've finally arrived at the day: the launch of NVIDIA's GeForce RTX 40-series GPUs based on its Ada Lovelace core architecture. During its Project Beyond event at GTC this morning, the famous leather jacket-clad CEO, Jensen Huang, took to a virtual stage to announce the company's latest GPUs. And you may want to sit down if you aren't already, because there's a lot to unpack. 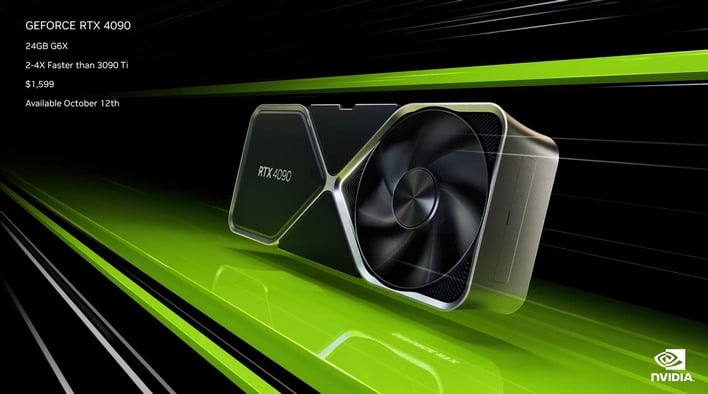 Since you're thirsty for details, we'll skip to the punchline: the GeForce RTX 4090 has 16,384 CUDA cores, 24GB of GDDR6X memory, and NVIDIA says it's twice as fast as the RTX 3090 Ti in raster graphics while being four times faster in ray-tracing workloads—although that's with DLSS 3, which we'll talk about in a minute. It's coming on October 12th, and it's going to cost $1,599. That's well below many pricing predictions. 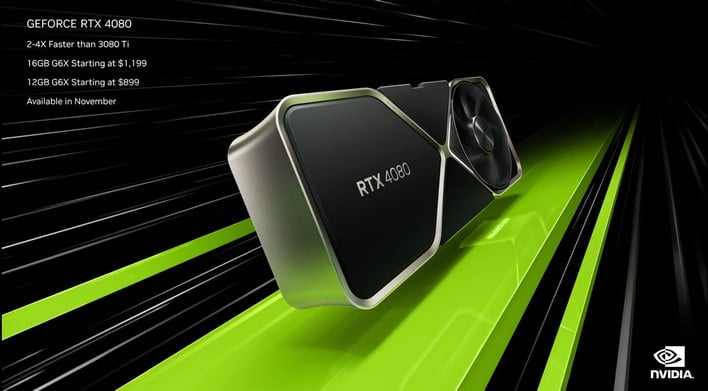 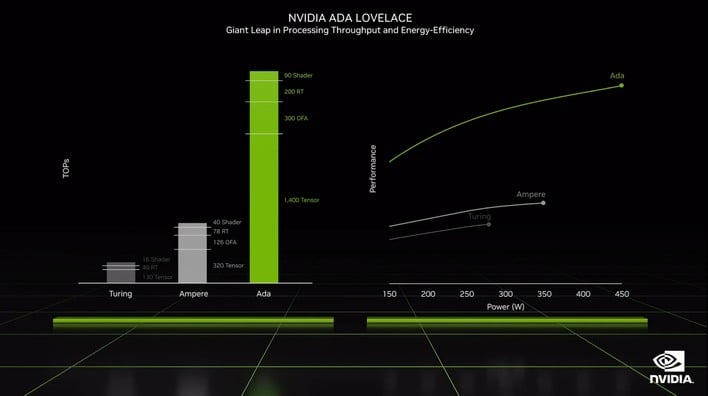 Interestingly, as part of this graph demonstrating NVIDIA's gain over the last generation, the company very briefly spoke on power efficiency. Lovelace is indeed more power-efficient than Ampere thanks to its insane performance, but it's difficult to not notice that the Ada bullet point goes all the way to 450 watts on the right-hand chart. Jensen didn't shy away from this, noting that "you can really push Ada," and saying that the company has overclocked it "past 3 GHz" in its labs. 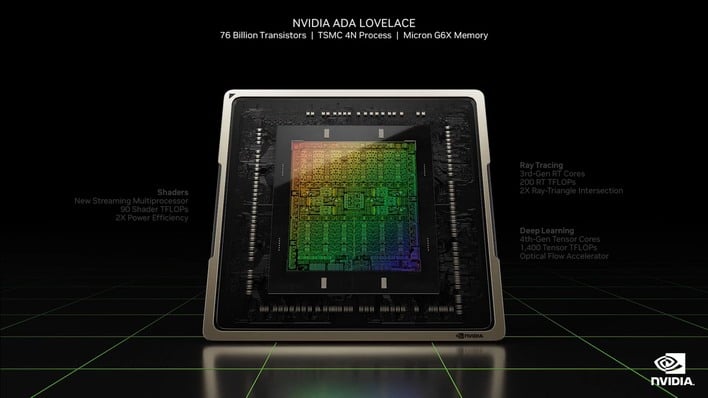 NVIDIA didn't offer a lot of details on the hardware configuration of the new GPUs, but did note that Ada "evolves all three RTX processors," meaning the CUDA cores, RT cores, and tensor cores. The new tensor core design is based on Hopper's Transformer Engine, while the RT cores gained "opacity micromap engines" that improve ray-tracing alpha test geometry performance by double. 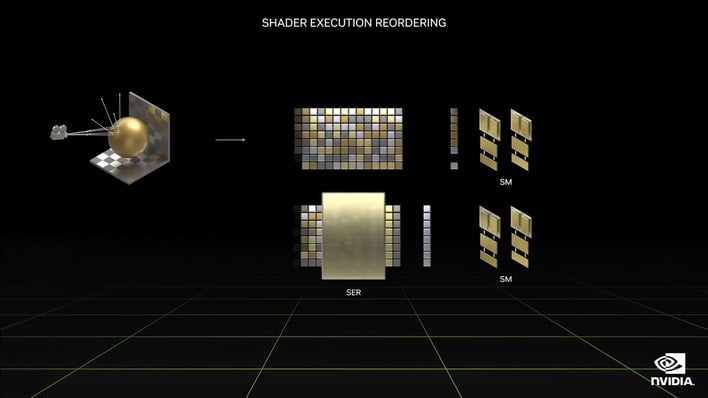 However, possibly the most notable hardware change in Ada Lovelace is Shader Execution Reordering (SER). Jensen compared SER to Out-of-Order Execution, which became prominent in CPUs in the 1990s. OoOE offers a drastic speed-up for CPUs, and likewise for GPUs, particularly for ray-tracing, which is notoriously hard to parallelize. By rescheduling the order of shader operations, ray-tracing can be come drastically more efficient; Jensen said that it offers a 25% boost in performance in general gaming, but doubles performance in ray-tracing. 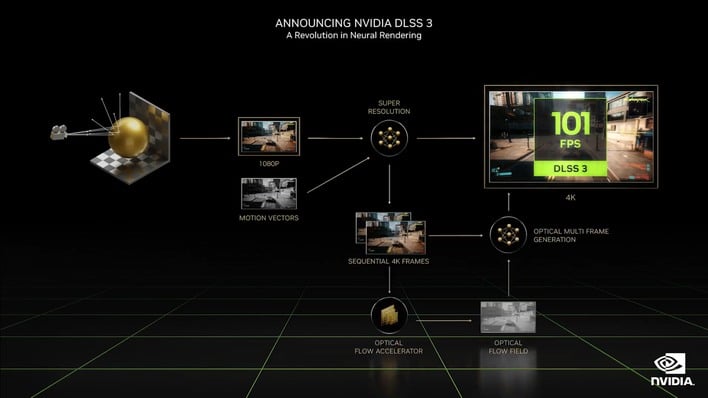 The other big advancement with Ada is DLSS 3. The new version of DLSS builds upon the foundation of DLSS 2.0 to not only reconstruct image data from partial data to increase resolution, but in fact completely generate all-new frames based on previous frame data. Jensen was quite clear that these frames are completely generated by the "convolutional auto-encoder" AI model powering DLSS 3; it essentially is video game interpolation using AI.

NVIDIA boasted that DLSS 3 can then increase the frame rate of games that are CPU-bound because it does not need to wait for the game engine or CPU to actually simulate the game. The perfect showcase for this is Flight Simulator, which is notoriously CPU-bound due to the extremely high-detail geometry in the game. Using DLSS 3, Ada is able to take the frame rate of Flight Simulator into the triple digits, something that is almost unthinkable without it. 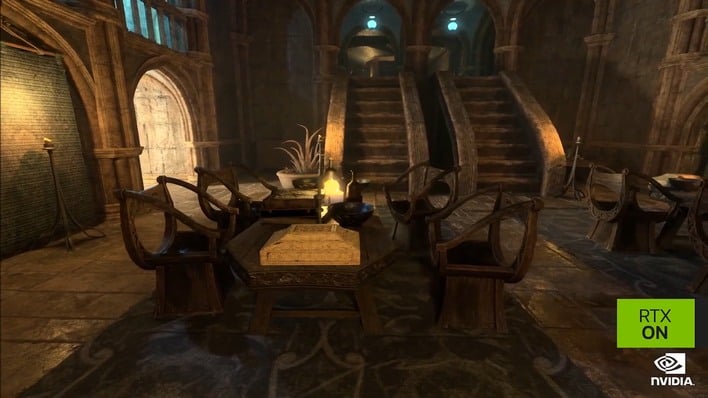 We're very curious about the image quality offered by DLSS 3.0, but that wasn't the most surprising announcement from the Ada Lovelace presentation. That honor goes to GeForce RTX Remix, which is apparently a tool that, as part of NVIDIA Omniverse, can pseudo-automatically create texture mods for video games that use AI to upscale and remaster textures complete with physically-simulated material data. The example used was The Elder Scrolls III: Morrowind from 2002—a 20 year old game. 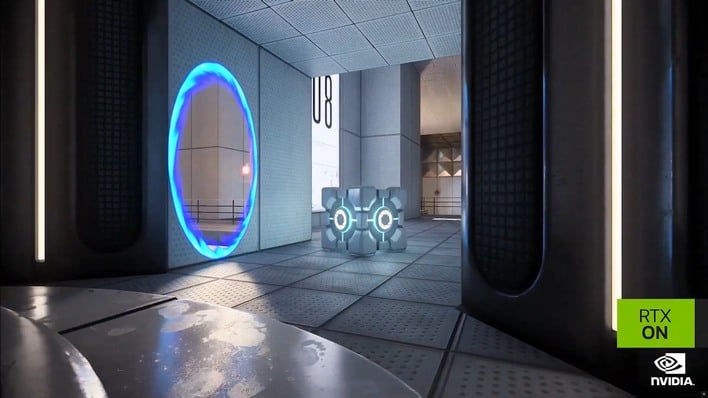 Portal With RTX reimagines the original game with ray-traced graphics.

Morrowind wasn't the only classic game NVIDIA remastered with RTX. Legendary first-person puzzle classic Portal is also getting the RTX treatment, and unlike Morrowind, this one's getting released to the public. Rather than a new game, it'll be presented as a mod for Portal, and NVIDIA says it will be available in October when the RTX 4090 launches. 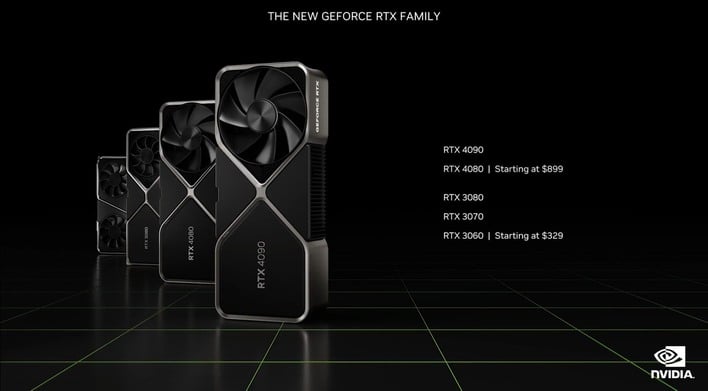 NVIDIA will be selling Ampere GPUs alongside Ada for the foreseeable future.

Mean Green ended the Ada Lovelace part of its presentation with the tacit acknowledgement that it will be selling Ampere GPUs alongside Ada for some time. Jensen said that the RTX 3000 series cards will comprise its lower-cost and entry-level offerings alongside the high-end Ada Lovelace cards. Notably, the only Ampere price listed, for the Geforce RTX 3060, is not changed from the original MSRP.
NVIDIA thoughtfully put the hardware details that everyone was waiting for right at the beginning of its presentation; said presentation is still on-going as I write this. We have another post available now all about the other things that NVIDIA announced this morning, which mostly revolve around its Omniverse software. Check out that coverage, as there are some pretty fascinating new developments there, too.