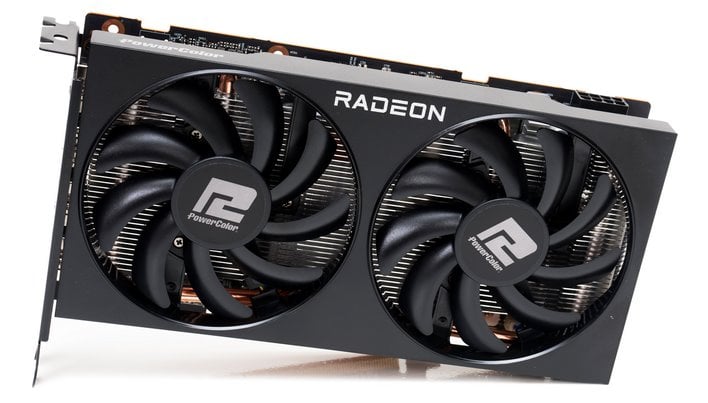 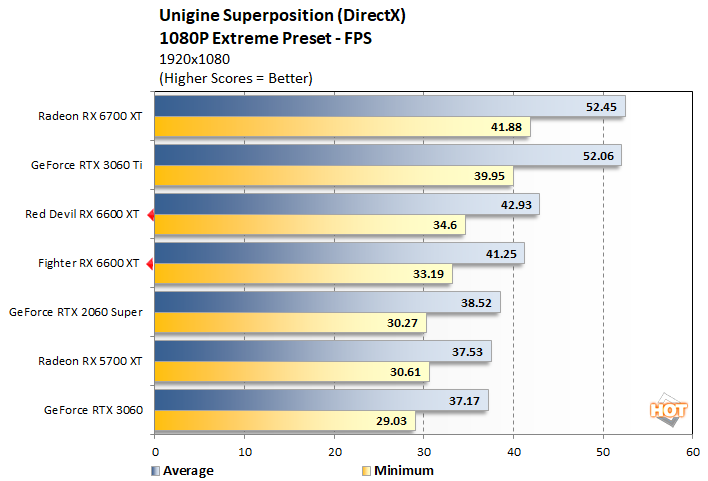 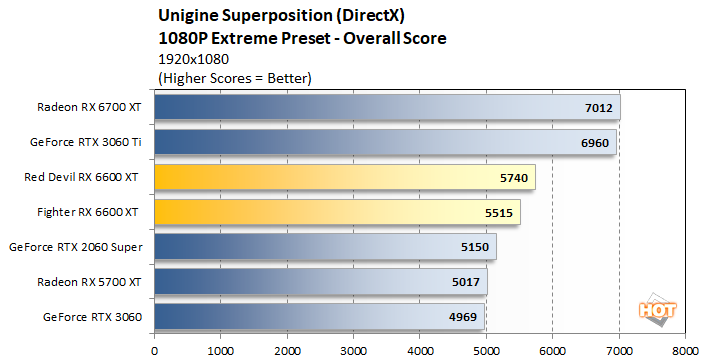 Unigine Superposition's 1080P Extreme test has the PowerColor Radeon RX 6600 XT cards we tested finishing just above the previous-gen cards and the GeForce RTX 3060, but well behind the higher-end, current-gen offerings from AMD and NVIDIA. The Red Devil's higher GPU clocks give it a slight edge over the Fighter card as well, but the two cards perform similarly. 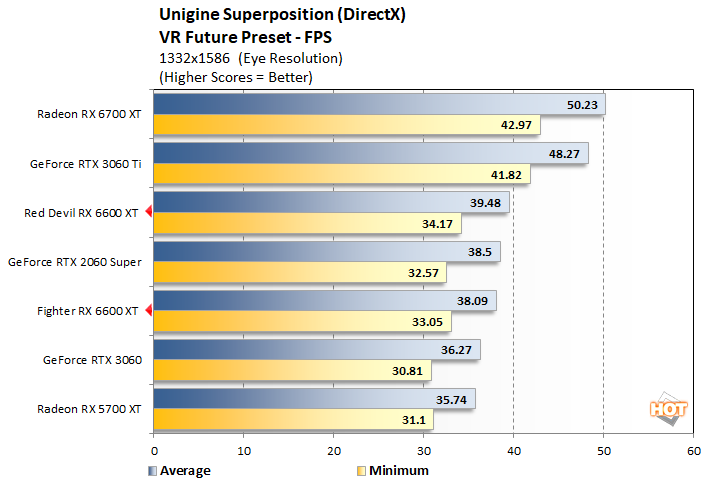 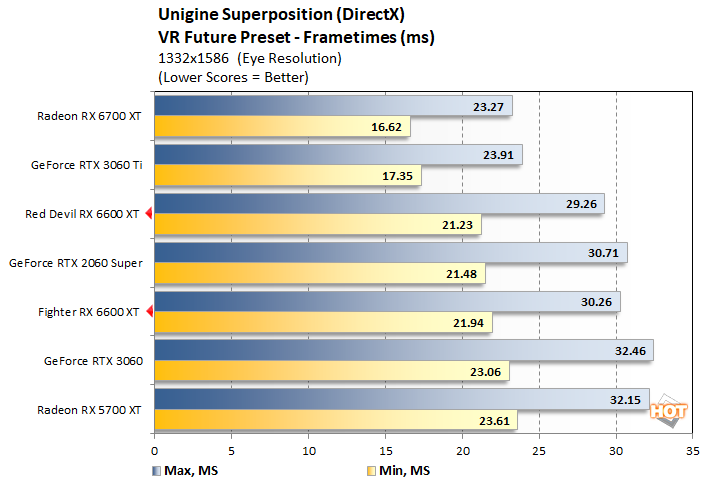 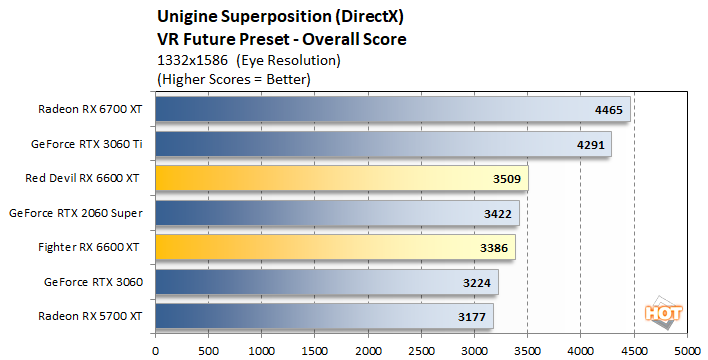 Superposition's VR Future benchmark illustrates part of the reason why GPU makers like AMD work with partners like PowerColor that will release customized, higher-performance variants of a particular CPU. In this test the PowerColor Radeon RX 6600 XT Red Devil's more robust design and higher clocks allow it to overtake the GeForce RTX 2060 Super, whereas the Radeon RX 6600 XT Fighter comes in just a notch behind. Both cards have no trouble dispatching the GeForce RTX 3060, though. 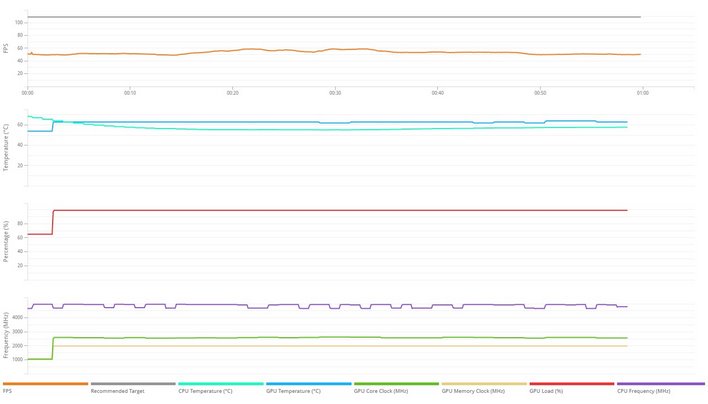 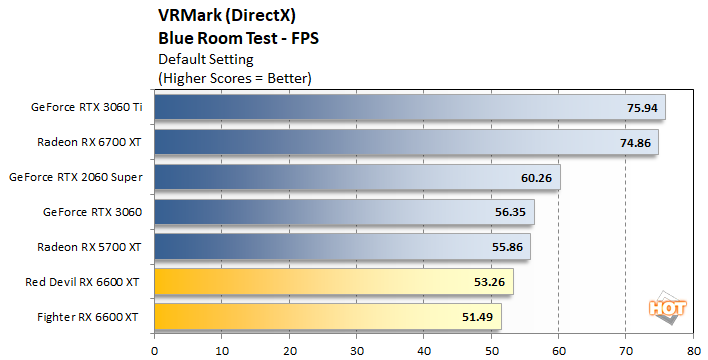 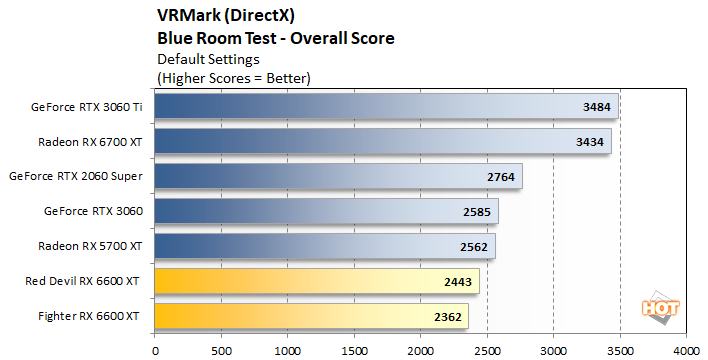 Our results with VRMark show the PowerColor Radeon RX 6600 XT cards trailing all of the other cards we tested by a small margin. This is one test that is sensitive to real-world memory bandwidth, and the 6600 XT ends up falling behind by a few percentage points. 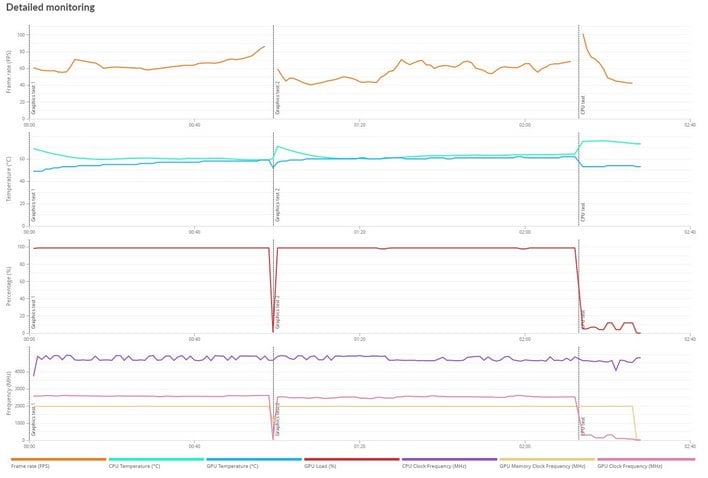 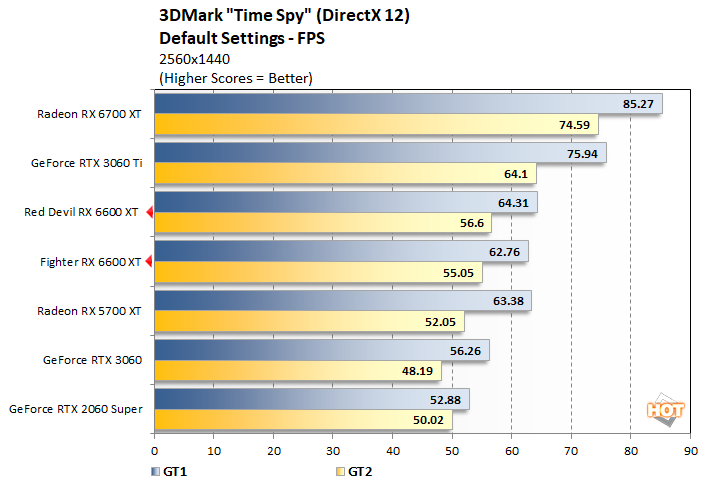 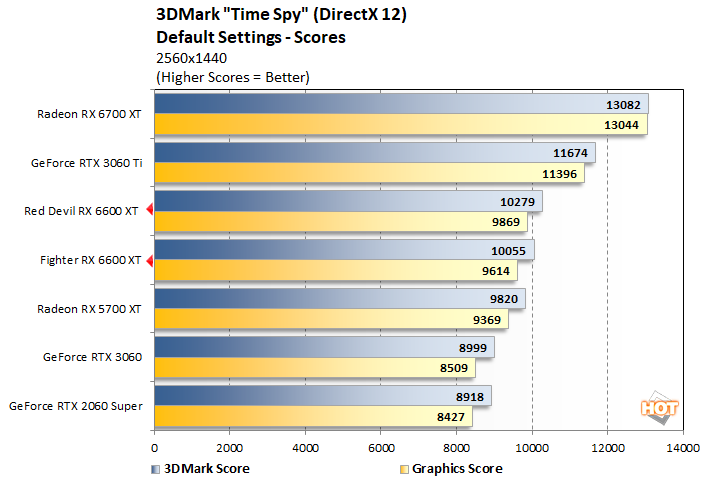 In the DX12-based 3DMark Time Spy benchmark, the PowerColor Radeon RX 6600 XT cards jumped right back into the middle of the pack, outrunning the previous-gen cards and the GeForce RTX 3060. Once again though, stepping up a notch to a higher-end card like a Radeon RX 6700 XT or RTX 3060 Ti yields significantly better performance. 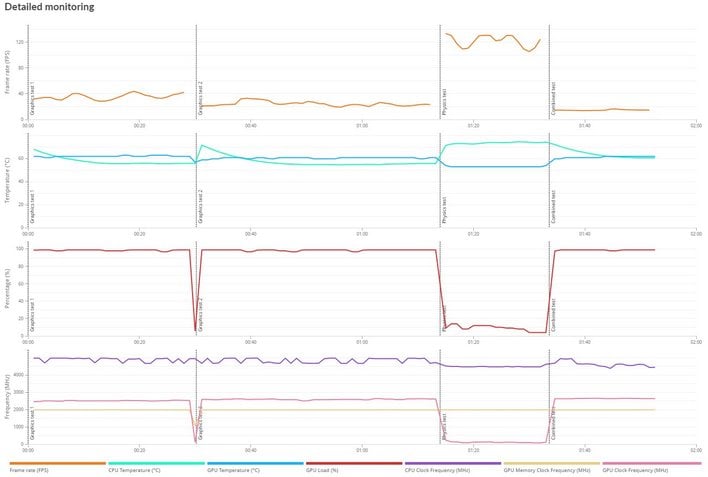 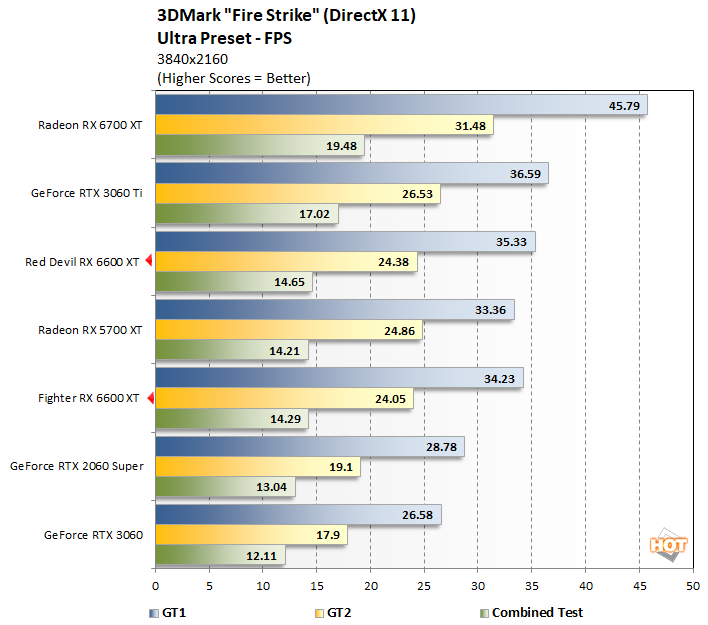 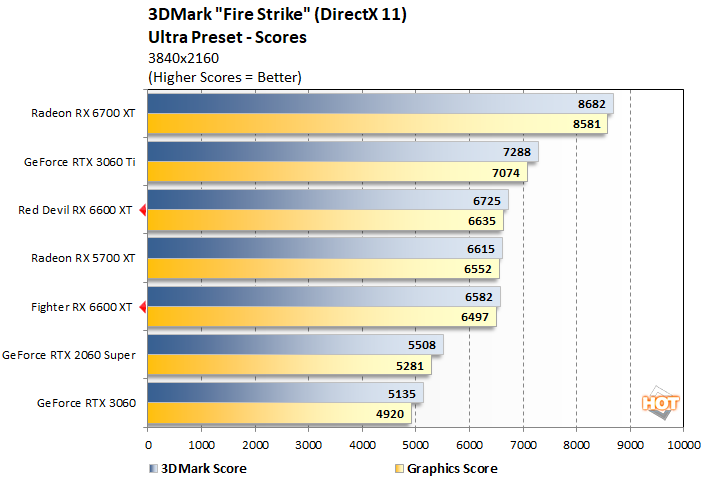 The Fire Strike Ultra test has the PowerColor Radeon RX 6600 XT cards sandwiching the Radeon RX 5700 XT. The higher clocked Red Devil finished slightly ahead of the 5700 XT, and the Fighter just a bit behind. Both cards were significantly faster than the GeForce RTX 2060 Super or RTX 3060 in this test, however. 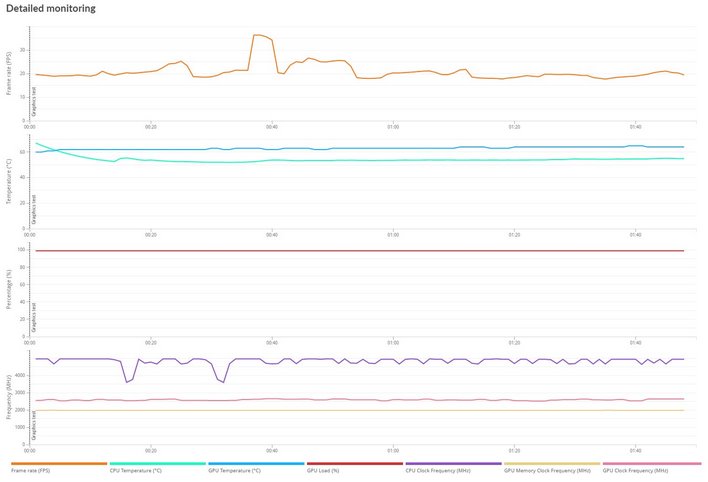 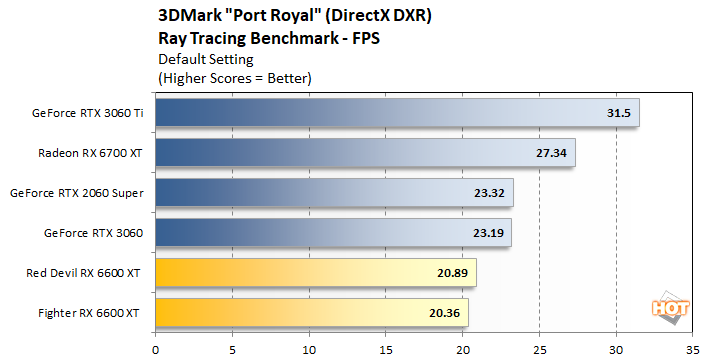 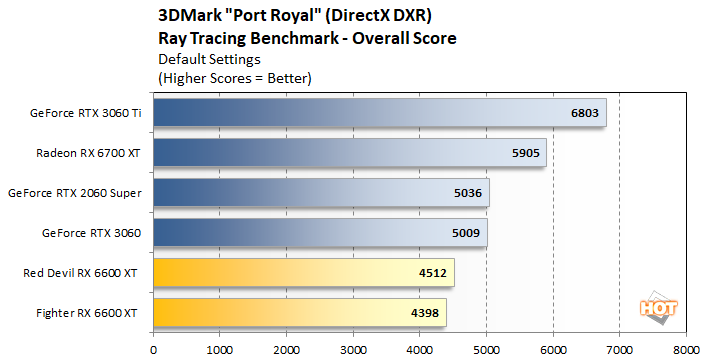 3DMark's Port Royal benchmark, which mixes DXR Ray Tracing effects with traditional rasterization, pushes the PowerColor Radeon RX 6600 XT cards to the rear of the pack. Neither could catch the RTX 3060 here. 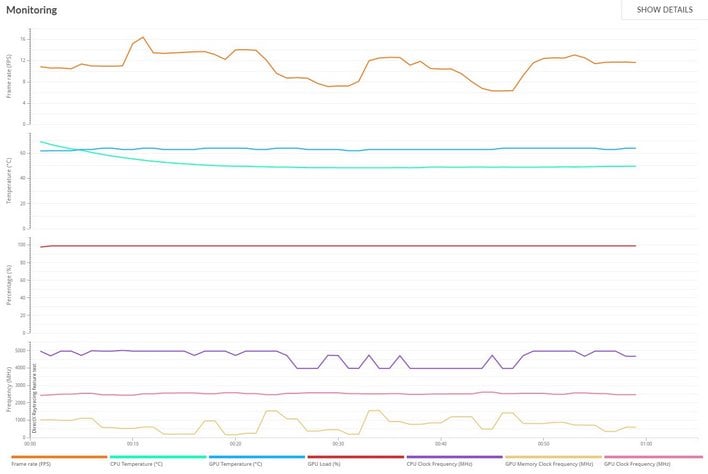 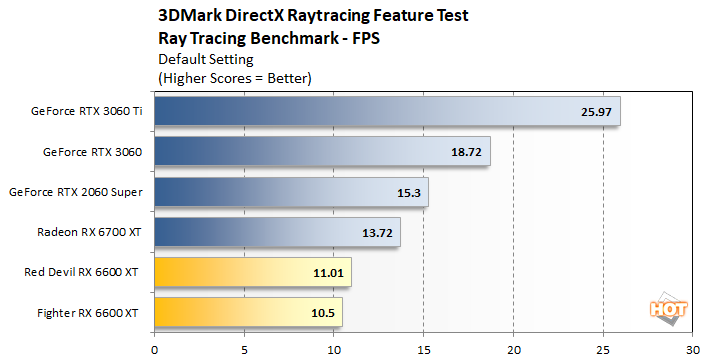 This benchmark, which focuses solely on DXR Ray Tracing effects, put the hurt on all of the cards, but also shows NVIDIA's strength. The NVIDIA GeForce cards take the top three spots, with the Radeons bringing up the rear even versus NVIDIA's previous-gen GeForce RTX 2060 Super.
PREV PAGE NEXT PAGE