We did a bit of overclocking with the PowerColor Radeon RX 6600 XT Red Devil using the various performance and tuning tools available in AMD's Adrenaline Edition drivers. Like previous-gen Radeons, when the GPU powering this card is boosting, frequencies and voltages dynamically scale upward or downward, based on the GPU's workload and the thermal and power thresholds at the time. That frequency and voltage curve, which determines the card's ultimate performance, however, can be altered to increase performance, save power, or sometimes both... 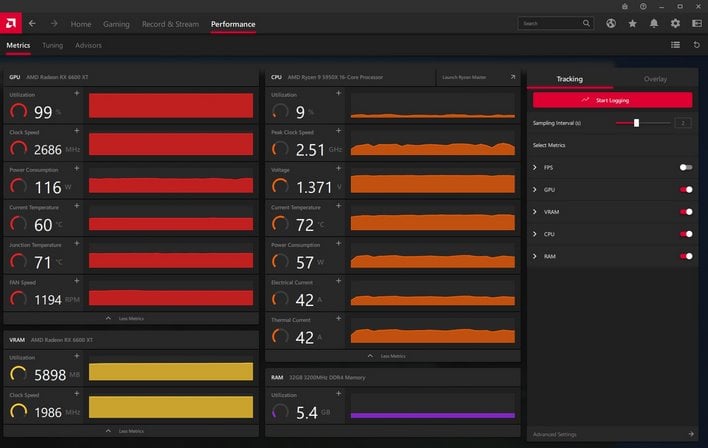 With the tuning options built into AMD's driver suite, users have multiple ways to tweak a Radeon's performance. Users can manually alter frequencies, memory timings, voltages, fan speeds, and the max power target using percentages or finer-grained numerical sliders, or they can opt to use various preset modes or auto-tune a number of characteristics, including GPU and memory frequencies as well as GPU voltage, including under-volting. Also note, that with this latest version of AMD's drivers, data from Ryzen Master is being pulled in for the CPU. 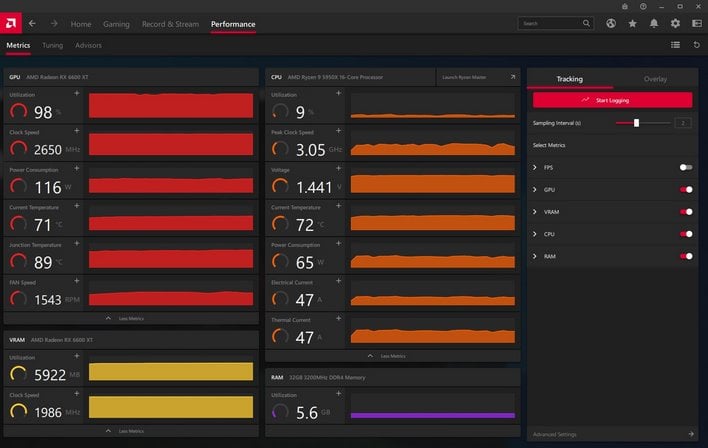 
With previous-generation Radeons, though the GPUs had multiple sensors built-in, a single sensor had been used to determine the GPU temperature, and data from that lone sensor was used to control the card's thermal profile. With newer GPUs, like the Navi 23 used on the PowerColor Radeon RX 6600 XT Red Devil, AMD has incorporated a network of multiple thermal sensors at strategic locations across the die. Data gathered from the sensors is used to determine what is called the "Junction Temperature", and it's the Junction Temperature that is used to tune the card's power and thermal profiles (the Junction Temperature is effectively the hottest part of the GPU die at any given time). AMD claims the increased resolution and accuracy from the additional thermal sensors allows it to increase overall sustained performance, because throttling based on the Junction Temperature is more reliable and effective. 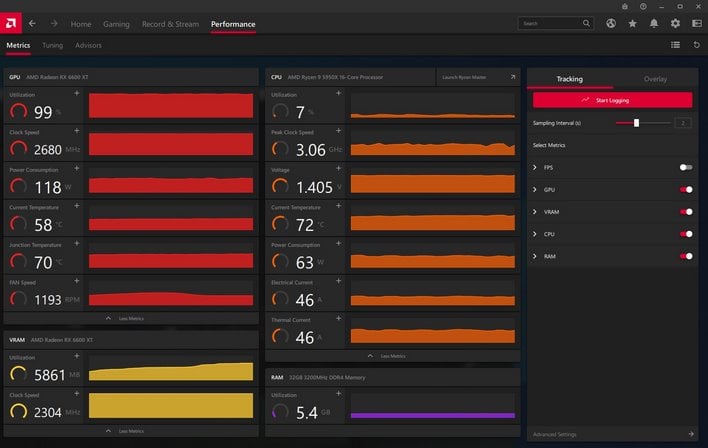 
At its stock settings, we saw the GPU clock typically hovering in the 2,630 - 2,660MHz range while gaming (give or take) with our particular sample. With a little tweaking we found that we could nearly max-out the memory clock on our card to 2,325MHz with fast memory timings enabled, and with a mild under-volt to 1,125mV, and +15% to the power target, we typically saw a wider-range of real-world game clocks, commonly in the 2,650MHz - 2,680MHz range, though it occasionally spiked higher. The junction temperature while overclocked peaked in the low 70°C range with these settings, without any modifications to the fan curve -- Navi 23, at least according to AMD's drivers, is a relatively cool running GPU. 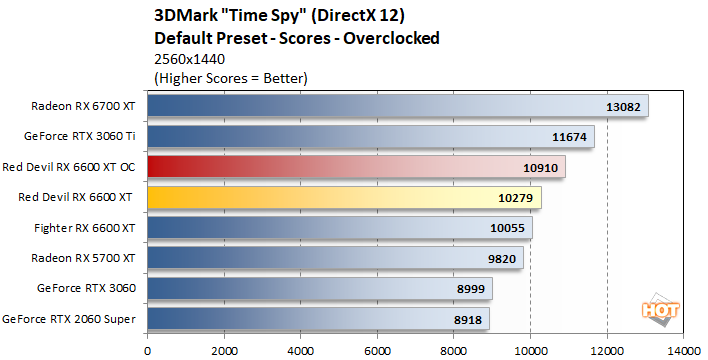 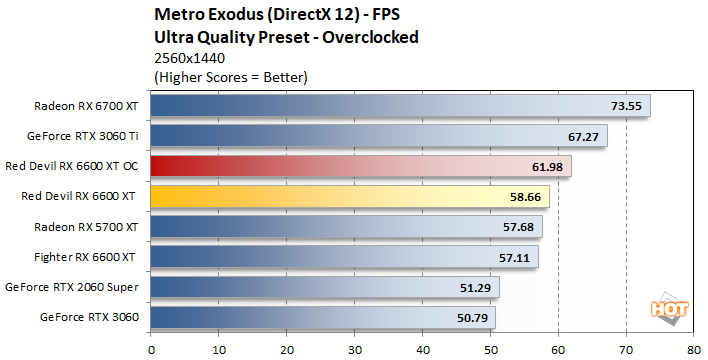 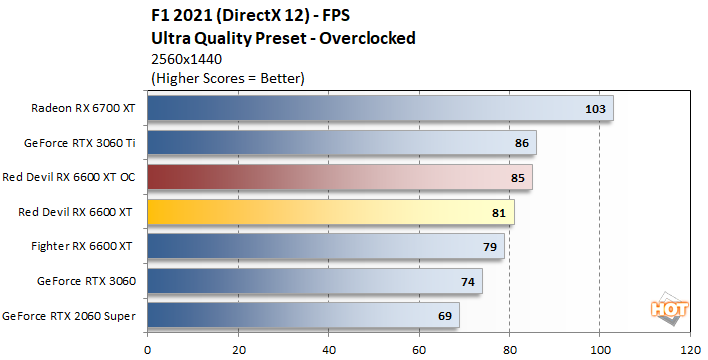 While we had the card overclocked, we saw some significantly performance increases. While overclocked, the PowerColor Radeon RX 6600 XT Red Devil couldn't quite catch the GeForce RTX 3060 Ti in the few tests we ran, but it got much closer than it did in its stock configuration. If you decide to snatch up one of these cards, and are willing to do a bit of tweaking, AMD's partners have seemingly left quite a bit of additional performance headroom on the table.

We'd also like to cover a couple of final data points regarding power consumption and acoustics before we wrap up. Throughout all of our benchmarking and testing, we monitored noise output and tracked how much power our test system was consuming. Our goal was to give you an idea as to how much power each GPU used while idle and also while under a heavy workload. These power numbers were captured while idle at the Windows desktop and during a 1440p Metro Last Life run though... 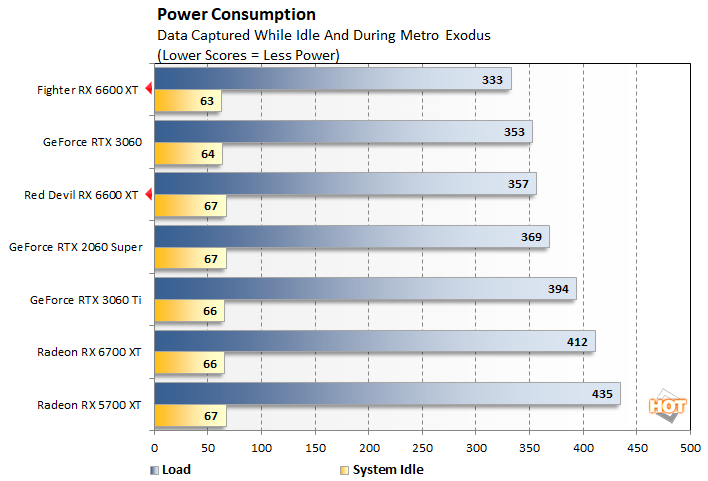 Our power consumption numbers show the new PowerColor Radeon RX 6600 XT cards consuming similar power to the GeForce RTX 3060 -- only a few watts separate the cards under both idle and load conditions. And both cards are among the most power friendly of the bunch.

With such low power consumption, and relatively large coolers, we can also report that both PowerColor Radeon RX 6600 XT cards remain quiet under normal operation. At idle both cards were inaudible over the other fans in our test rig. And the Red Devil is effectively silent, because its fans completely stop when the GPU temperature is below 60°C. Under load, the fans on both cards do spin up to audible levels, but they remain quiet and only produce a dull whir.

Gamers looking for a solid mainstream GPU for smooth 1080p gaming have a new contender to consider with the Radeon RX 6600 XT. As our number have shown, with most titles that use traditional rasterization techniques, the Radeon RX 6600 XT is clearly faster than the GeForce RTX 3060 and previous-gen cards like the Radeon RX 5700 XT or GeForce RTX 2060 Super. Things get a little dicey when you factor ray tracing into the equation, however. With most ray tracing-enabled titles, NVIDIA has a distinct and significant advantage, though that wasn't the case with the recently released F1 2021. Still, speaking in general terms, if your favorite games use ray tracing, NVIDIA still has the edge at any given price point. 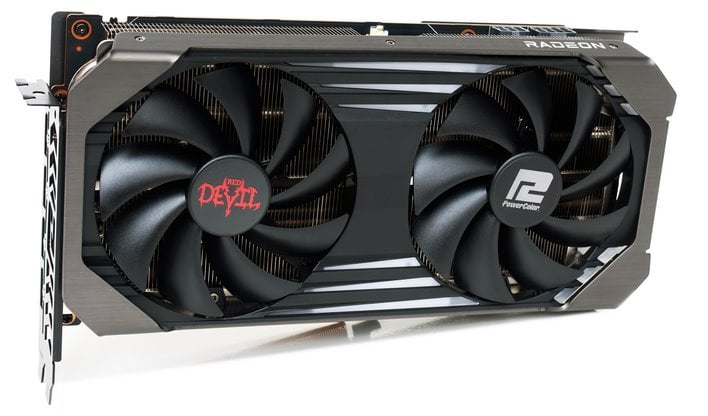 That said, there is still a lot to like regarding the Radeon RX 6600 XT. In the majority of non-ray traced titles, these cards will offer strong performance at 1080p, in cool and quiet packages, that don't consume a lot of power. We're also told that there will be significantly more stock of these cards than most other recent GPU releases, and some models -- like the PowerColor Radeon RX 6600 XT Fighter -- should be selling for at or close to its $379 MSRP in the coming days (Red Devil pricing should be revealed tomorrow). While that $379 seems high in comparison to previous-gen mainstream cards like the GeForce GTX 1060 or Radeon RX 5600 XT, which launched with MSRPs well below $300, the fact is everything required to build a GPU today is more expensive than it used to be. We're not making excuses here, just pointing out the reality of the current market.

Even still, assuming availability at (or around) MSRP, which we're told is a real possibility, the only competition out there in the $300 - $400 price range currently are GeForce GTX 1060, 1650, and some 1660 cards, and the Radeon RX 6600 XT is a clear step up over any of those options. If we're talking MSRPs, however, the GeForce RTX 3060 Ti is technically only $20 more (MSRP $399) and represents a big step up in terms of performance. Of course, they're selling for ~$800 street prices at the moment, so the MSRP conversation is somewhat moot. Regardless, if you're itching for a new GPU for a mainstream build today and the new Radeon RX 6600 XT fits your budget, it should be on your short list of considerations.