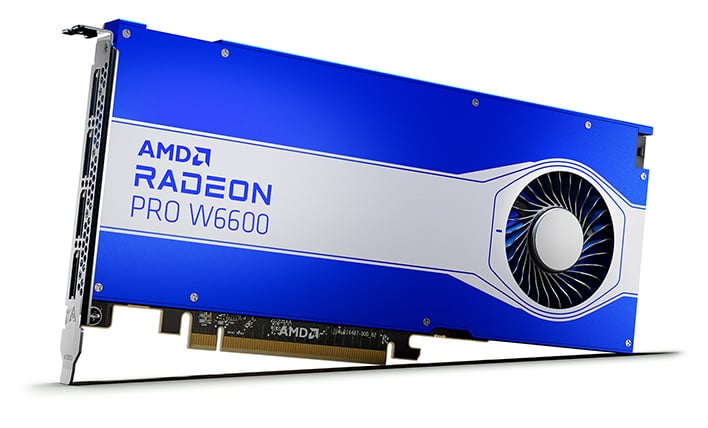 Embargos lifted on Radeon RX 6600 XT reviews this morning, but that mainstream gaming GPU isn’t the only one AMD is pushing out the door today. The Radeon Pro W6600, which was announced back in early June alongside the more powerful Radeon Pro W6800, is also launching today. As its name implies, the Radeon Pro W6600, like its gaming-class Radeon RX 6600 XT counterpart, is a professional workstation GPU that targets more mainstream price points and performance levels than the W6800. The Radeon Pro W6600’s feature set is right in-line with higher-end RDNA 2-based offerings, however, and includes ISV certifications for many of the most popular professional design and content creation applications currently available.

The AMD Radeon Pro W6600’s main features and specifications are outlined in the table below. Give it a gander for some of the high-level takeaways and then we’ll dive a little deeper, take a tour of the card, and see how it performs versus an array of similar pro-vis GPUs.

Find AMD Radeon Pro Workstation GPUs @ Amazon
We're going to keep things concise and to the point in this review, because we've discussed AMD's RDNA 2 architecture and a number of GPUs leveraging the technology in a string of previous article. If you'd like some additional detail regarding the tech that makes the Radeon Pro W6600 tick, we suggest checking out our Radeon RX 6800 and Radeon RX 6800 XT launch article. In that piece, we provide details regarding the “Big Navi” GPUs and the RDNA 2 architecture at the heart of the latest generation of Radeon Pro cards. We discuss AMD's new Infinity Cache technology and the GPU’s new cache hierarchy, the new Compute Unit (CU) design and their integrated Ray Accelerators, and Smart Access Memory (SAM), among many other things. If you’d like all of that additional architectural detail, you’ll find it all there. 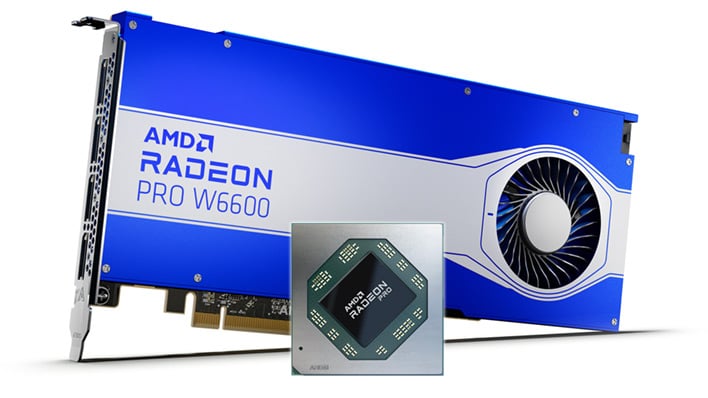 The W6600 GPU is comprised of 11.06 Billion transistors, and like its more powerful cousins, is manufactured using a 7nm process. Peak half-precision FP16 throughput is rated for 20.8 Teraflops (10.4 Teraflops peak FP32) and cards feature 4 display outputs. For today's launch, we got our hands on a desktop Radeon Pro W6600, but rest assured they are coming to mobile workstations soon as well. 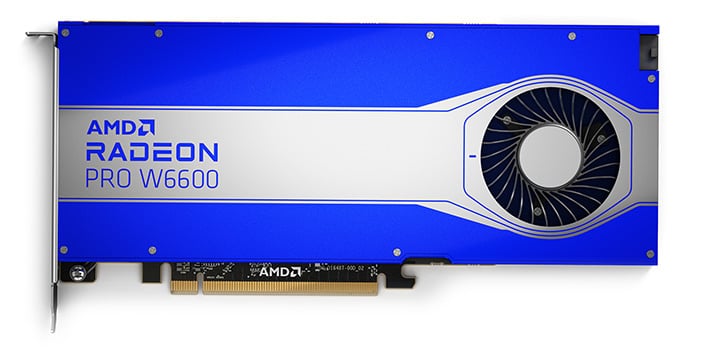 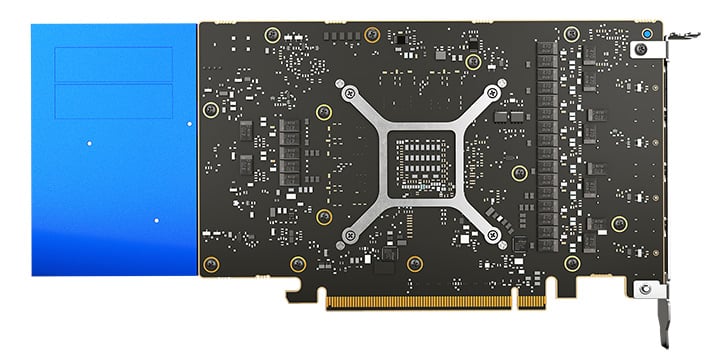 In terms of its design, the Radeon Pro W660 looks much like previous gen Radeon Pro cards. It has similar coloring and a boxy, blower-style cooler. There is a dense array of heatsink fins under the stylish blue shroud that sits directly atop the GPU and RAM, with the barrel-type fan offset towards the back of the card. The fan shroud is actually much longer than the PCB itself, and extends off the rear by a few inches. The entire assembly though is relatively small and slim, and the Radeon Pro W6600 requires only a single slot.

The Radeon Pro W6600 features a single 6-pin PCIe power feed, which provides plenty of power headroom for the card. Between the PCIe slot and the supplemental feed, 150W will be available to the Radeon Pro W6600 (75 + 75), which is nearly 20W higher than its 130W max board power rating.

The display outputs on the Radeon Pro W6600 consist of 4, full-sized DisplayPort 1.4 ports with DSC, all of which can be used at any given time for multi-monitor configurations. The remainder of the case bracket features hexagon-shaped vent holes, for exhausting warm air out of the system.

It’s time to get her plugged into the test rig and see how she performs...