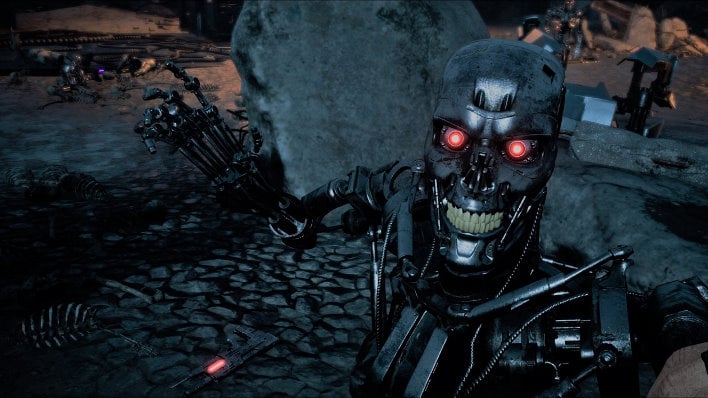 We're taking a slightly different tack with our performance testing for FSR. Unlike DLSS 2.0, which only works on higher-end graphics cards like the $350 and up GeForce RTX 2060 (we're talking MSRP here; shortages notwithstanding), FidelityFX Super Resolution has a chance to make games playable on lower-end GPUs that might not otherwise be. For that reason, we've included some low-end cards and more "affordable" gaming GPUs of today, to our testing. Our goal is to take settings that are unplayable or borderline-playable, or too choppy to be really enjoyable, and see if FSR can turn these titles into smooth-running, high resolution masterpieces. It's a difficult task, but AMD says that FSR is up to the challenge. We will start, however, with much more capable cards first.

Our test system is the same box that did all of our recent mulit-core performance scaling tests. It's got a dodeca-core Ryzen 9 5900X and 32GB of DDR4-3600 memory riding an ASUS TUF Gaming X570-Plus (Wi-Fi) motherboard. Our test bench's operating system is Windows 10 Pro 21H1 with the latest Game Ready drivers from NVIDIA and AMD's new Catalyst 21.6 release, which will be available today. This machine should not be starved for CPU power, so our performance will come down to the graphics card's capabilities and FSR's scaling power.

Our high-end cards are a GeForce RTX 3070 and a Radeon RX 6800 XT. While their current price tags put them out of the reach of most gamers, they do occupy different rungs of the MSRP price ladder. We're not comparing them to one another, but to themselves. For that reason, each card gets its own graph.

The Riftbreaker from Exor Studios is a mulit-genre mashup in which players must defend a mech capable of interdimensional travel from hordes of alien creatures. The demo reminds us very much of playing StarCraft II: Wings of Liberty's final All In mission on Brutal difficulty. Defend the mech from swarms of Zergling lookalikes and definitely-not-Ultralisks for as long as possible, until it's able to warp on out. Jokes aside, the randomized map in the playable demo is pretty addictive because the game constantly changes.

The title's engine makes extensive use of ray-traced shadows on hardware which supports DirectX Ray Tracing effects like our two high-end cards. The Riftbreaker has separate CPU and GPU tests, and we focused on the GPU side of things here as once the CPU starts to become a limit, FSR doesn't matter nearly as much. 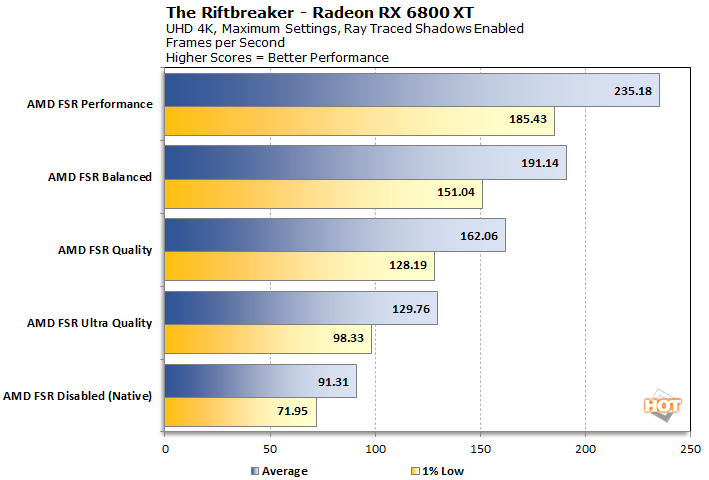 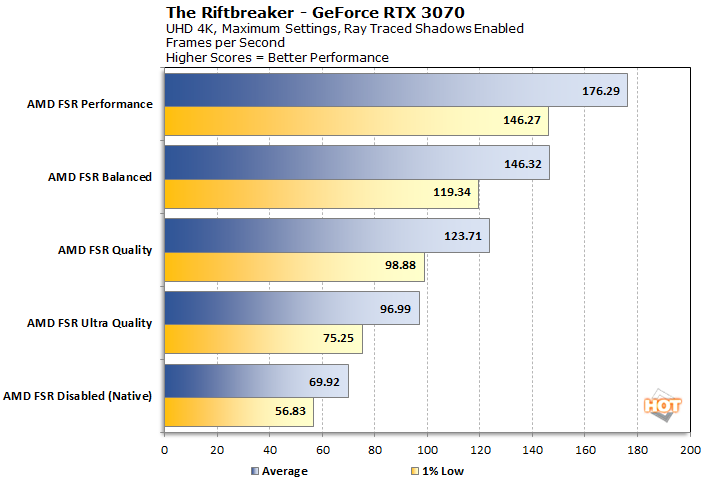 Right away we see that the promises AMD made about FSR come true. Going from the native UHD 4K resolution down to the Performance setting more than doubles the frame rate. In this case, it's not terribly important, as both of our test cards average more than 60 fps natively and push higher from there. Because FSR Ultra Quality looks so good in motion, we'd still enable it on these cards just to make sure that the game is perfectly smooth as much as possible.

Anno 1800 is Ubisoft's citybuilder set at the dawn of the Industrial Age. Because the action isn't as frenetic as the other titles in our test suite today, high frame rates aren't as important. Still, gamers want a smooth experience without lag, and we're testing exactly that at UHD 4K. 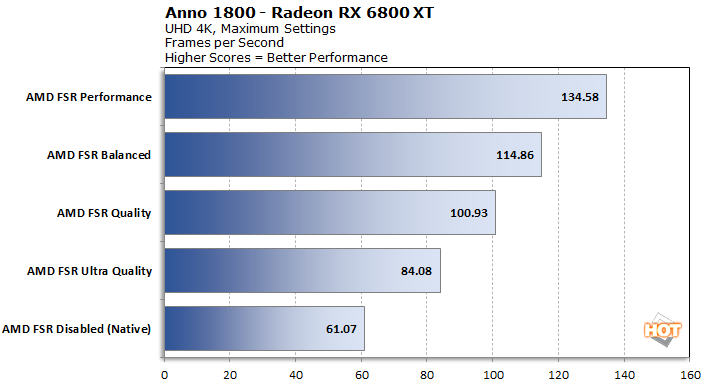 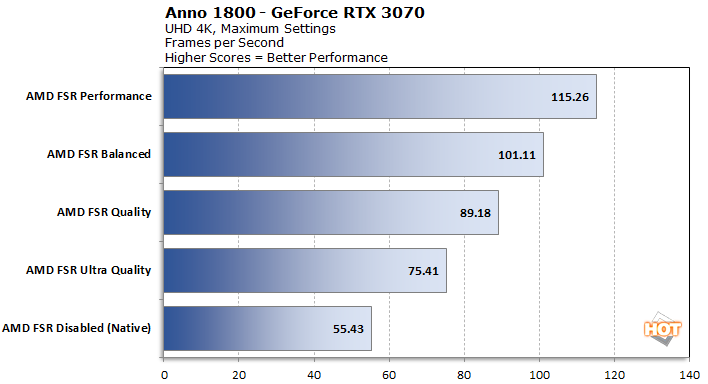 This is another title that doesn't really need much in the way of a boost to start out, but having FSR Ultra Quality enabled will give the game a performance kick that will make sure it's always smooth. If you're one of the lucky gamers with 4K panel with a 120 Hz refresh rate like the Acer Predator CG437K, lower-quality FSR settings will boost the game's performance to better utilize that high refresh rate.

Godfall is Gearbox Publishing's and Counterplay Games' co-op melee adventure with loads of hack-and-slash gameplay and some really nice looking graphics. There's not much on offer here beyond the combat and the graphics. However, those two things are pretty superb. If you're in for some fighting without a lot of reading, this might just be your jam. 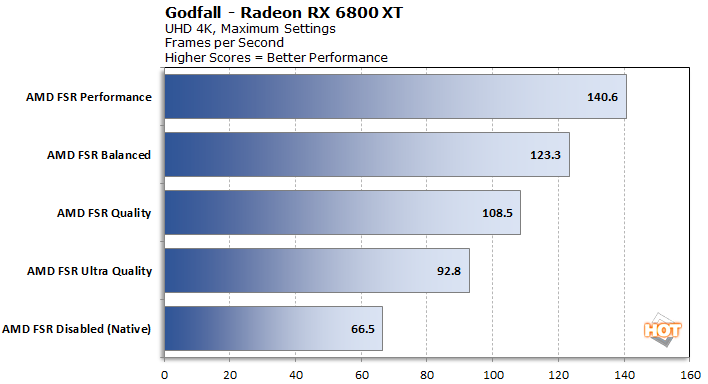 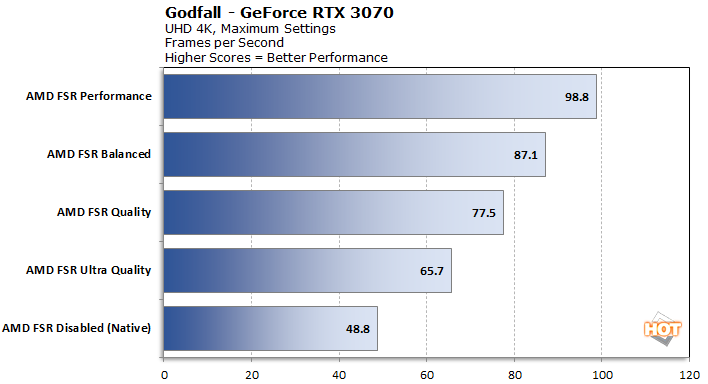 This is the first title that really needed FSR on these high end graphics cards, in our opinion. Both cards could run it with max settings at a sub-60 fps average, and the frame rate dips into the low 30s at certain points of the benchmark. However, all of that gets fixed immediately just by using the Ultra Quality setting, which becomes buttery smooth at the 2,560 x 1,440 input resolution of Ultra Quality.

Some lower-end graphics cards, the GeForce GTX 1650 SUPER from EVGA and an ASUS Radeon RX 5500 XT, represent our budget-friendly GPU options. We last saw both of these cards in our Gaming Level Up article, in which we took a modestly-specced system with integrated graphics and examined how much performance we could wring from it with discrete graphics cards. Neither of these cards is designed for gaming with crazy settings at 4K in the latest games, but we're going to try to do just that with the help of FSR.

The intent behind our chosen settings here is to find a resolution and settings combination that was on the borderline of playability at 4K, and then to see if FSR could make up the difference. This way, builders can get the monitor of their dreams now and kind of get by on the graphics card they can afford for the moment. It's also a pretty common resolution for home theater PCs connected to a UHD television.

The Riftbreaker supports DirectX Ray Tracing, but our two budget graphics cards do not. However, we didn't turn down any of the other settings, and just ran the GPU-focused benchmark with the highest possible settings at 4K. 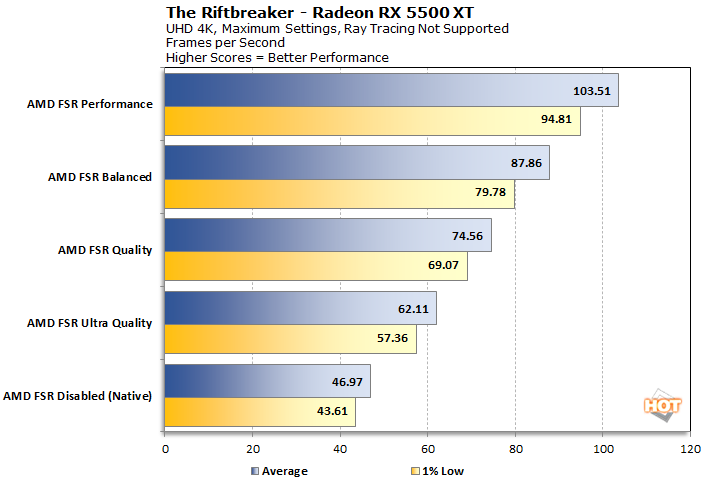 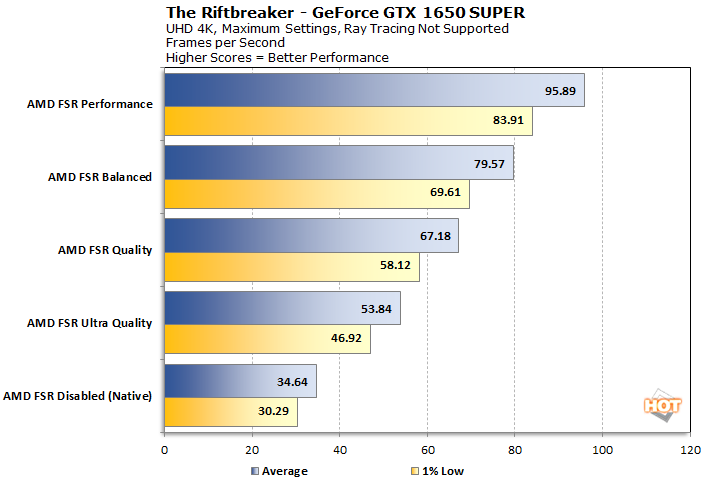 Oddly enough, the game was still somewhat playable at these high settings on these bottom-end graphics cards. The GeForce GTX 1650 SUPER had to struggle pretty mightily at 4K, but even Ultra Quality brought enough relief to make the game feel smooth enough. Quality brought the average up over 60 fps, and any other setting was icing on the cake. On the Radeon RX 5500 XT, our GPU had a little extra horsepower to bring us back from the brink natively, but really push up to just over 60 fps at Ultra Quality and really smooth it out at the Quality setting.

Anno 1800 moves at a slower pace, so lower frame rates are acceptable in this title. Still, it wasn't really playable at the native resolution on either card, and felt very laggy as we clicked through the interface even on the High settings preset, rather than the maximum detail we used with our faster cards. Could FSR fix it for us? 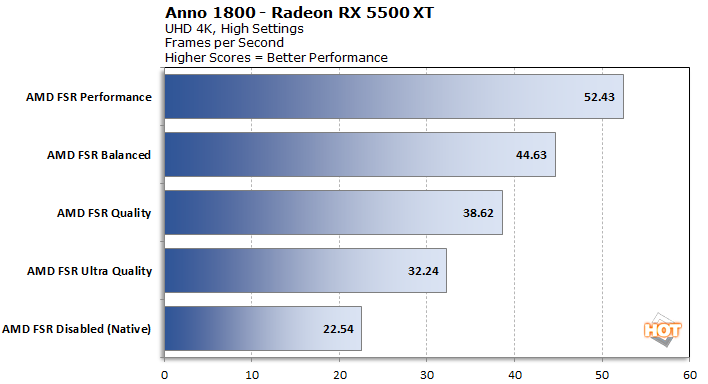 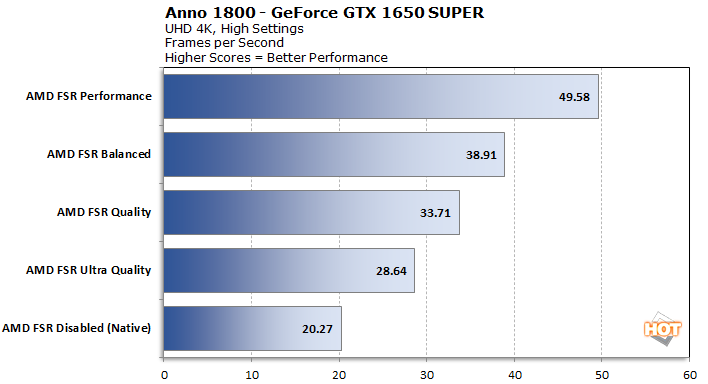 In a word, yes. Neither card was capable of 60 fps on average in this title's built-in benchmark, even on Performance, with High detail. However, 45 to 50 fps on average translated to low 30s on the bottom end while looking at heavily wooded forests. It's a stretch to be sure, and medium detail might have been preferable, but we're pleasantly surprised.

If we're being technical (and we are!), our GeForce GTX 1650 SUPER does not meet the minimum system requirements for Godfall. The minimum specifies graphics cards with either 6 GB or 8 GB of VRAM, including the GeForce GTX 1060 and Radeon RX 570 8 GB. We could not get the game to be playable on that card at all with 4K, even when we dropped all the way down to medium detail. So we had to survive with 2,560 x 1,440 as our upscaled resolution, which allowed DSR to dip down to a mere 720p. 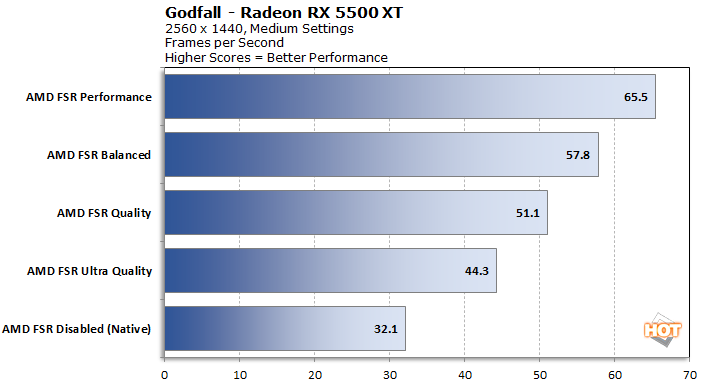 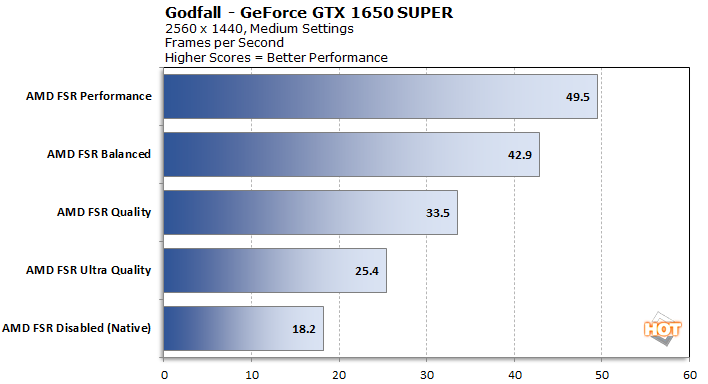 The GeForce GTX 1650 SUPER went from completely unplayable to passably acceptable with FSR. The card actually surpassed AMD's promised 2.4x performance uplift here, as the frame rate was closer to 2.7x what it was natively. The Radeon RX 5500 XT didn't see the same percentage uplift, but again the game was playable where it wouldn't have been otherwise. Performance FSR at 1440p isn't the sharpest experience around, considering it starts with a native 720p image. Still, these results are really nothing short of bringing slower cards back to relevance. It wouldn't be our first pick for playing this title, but the entry level GeForce GTX 16 series and Radeon RX 5000 series cards do have some value today.

This isn't the last of our FidelityFX Super Resolution coverage. AMD's Chief Architect of Gaming Solutions Frank Azor and Director of Software Development Carlos Silva, Sr., will join our merry band for Two and a Half Geeks this afternoon at 5:30 PM EDT. They'll be taking and answering questions live from our audience, so be sure to hit the stream when it starts.

Overall, we're really quite impressed with FidelityFX Super Resolution. AMD did something that NVIDIA did not: bring enhanced upscaling techniques to not only its own low-end cards, but to those of the competition as well. Three attributes will serve FSR well going forward: enhanced image quality, improved performance, and compatibility with a wide selection of graphics cards.

Using the spatial data already in the scene, FSR can find object edges and sharpen them, giving improved separation and detail to lower-resolution images. We think that DLSS 2.0 does a better job, at least right now, but it's not possible to give a definitive answer until a few games support both upscaling techniques and we can do some side-by-side comparisons. That seems fairly unlikely in the short term, but it'd be a great way to test out the two competing technologies and find an overall victor. Until then, AMD can rest on its wide compatibility as a way to draw attention from developers. It's certainly got our attention now.