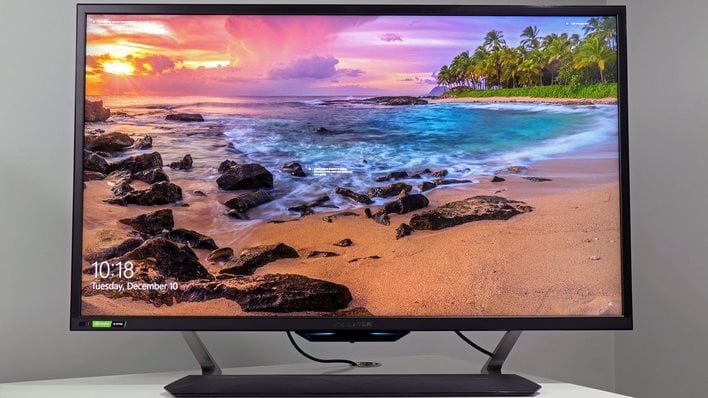 Gaming on a much larger screen has always had this almost unnatural appeal. Over the years, many enthusiasts likely have tried to hook up a PC to a much larger display for gaming bliss, whether it was a TV or projector via S-Video, component or DVI, or nowadays, the biggest possible LCD one can afford. When LCD TVs became the norm for home entertainment use, it made adopting the large screen experience much easier. PC Monitor manufacturers started catching on and now offer display sizes up to 65-inches in regular 16:9 or ultrawide 21:9 aspect ratios, with what we’d consider bare minimum PC gaming features these days: a 120Hz panel, G-Sync or FreeSync variable refresh rate compatibility, and low input lag.

NVIDIA rode this extra large trend with its Big Format Gaming Displays (BFGD), which have brought us the 65-inch HP Omen X Emperium 65 and Acer Predator BFGD, but not all of us are looking to replace our living room TV nor have desk space for such massive displays. For those of us that want something not too big, but not too small either, there were always 40 and 43-inch LCD TVs, but as someone that uses a three-year-old Samsung 40-inch 4K TV as a monitor, LCD TVs in those smaller sizes have unquestionable image quality and performance compromises.

Enter the Acer Predator CG437K, a 43-inch 4K HDR gaming behemoth that better fits your desk than a BFGD. Acer packs in a 144Hz capable panel, stylish design, both G-Sync and FreeSync support, DisplayPort inputs, integrated USB hub and customizable RGB lighting sprinkled on top -- because it’s not a gaming accessory unless there’s RGB lightning of course. It's clear Acer went about checking off every desirable gaming feature you’d want in a monitor at any size with this new, big Predator panel.

At first glance, the CG437K looks like your typical monitor. Its black with speaker grilles, it's bezels aren’t that thin, especially when compared to the latest Samsung TVs and Dell monitors, but they aren’t as massive as the LCDs of yesteryear. All the controls, light sensor and power indicator lights are located on a trapezoid bar below the lower monitor's bottom bezel.


The Predator CG7's silver monitor stand is sturdy and leaves 3.75-inches of height underneath the display, something typical TVs lack. We appreciate the stand height, as it leaves room for components and peripherals, like a DAC, speaker amp or gaming console. Acer places two little game controller icons on the base of the stand, signifying a placement location of said game controllers. Unfortunately, there isn’t an integrated Qi wireless charger or anything in the base, it’s simply a surface to place things on. While we didn’t put game controllers on it, it is a good spot to put collectibles, but a charging pad would be a very welcomed feature. 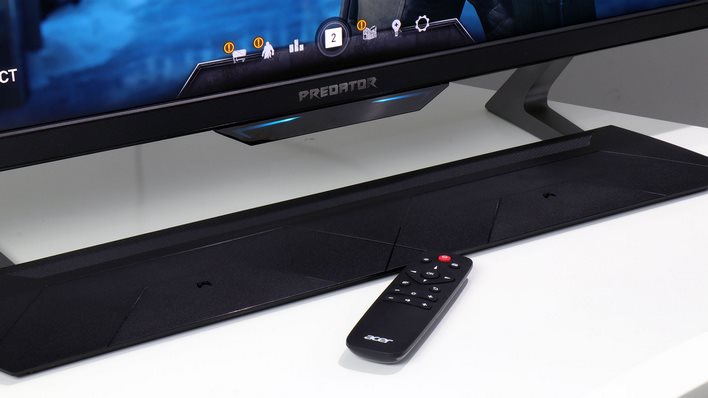 The remote Acer includes with the monitor is a little underwhelming. It performs some basic functions which is very convenient for those that don't want to mess with tiny display controls all the time. However, its gloss black finish attracts fingerprints, feels a little flimsy and looks like an afterthought. We found ourselves using the physical buttons on the display more often than using the remote but again, especially with a large panel like this, you may find yourself backed away from this display more often, in which case reaching for a remote for basic controls can come in very handy.

Let's dig deeper into the Predator CG7's design and features, next...