AMD To Push Performance Envelope At CES 2020: What To Expect From Ryzen And Radeon 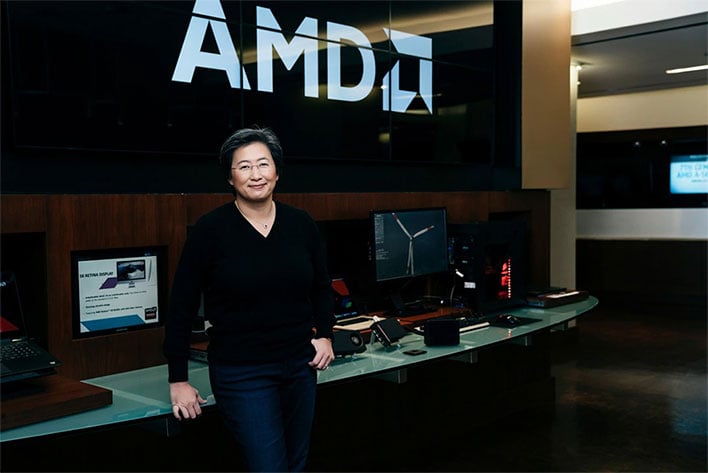 As we look back at 2019, one thing is for sure—AMD is a force to be reckoned with, thanks in large part to the continued evolution of its Zen CPU architecture. Make no mistake, though, AMD is not resting on its laurels. Now that 2020 is official under way, AMD is promising to "push the envelope yet again" in the high-performance computing sector.
AMD made the bold statement on Twitter, adding that 2020 will be an "incredible year" for the enthusiast sector. No specifics were given, though AMD did also announce it will be hosting a press conference at the Consumer Electronics Show (CES) in Las Vegas on January 6 at 2:00 pm Pacific (5:00 pm Eastern). And it will be livestreamed on AMD's YouTube channel.

At #CES2020, AMD will push the envelope yet again to make 2020 an incredible year for high-performance computing.

Join us for our press conference on Monday, January 6th at 2PM PT on YouTube!

So, what can expect from AMD in 2020? There are a few things on tap. One of those is the launch of AMD's fourth generation Zen 3 CPU architecture. It can be a little confusing if you don't follow the technical details closely, but that's not a typo—Zen 3 is the fourth iteration of Zen. Here's a timeline of Zen...
The two starred entries have not yet launched, so technically, specs, features, and dates could change. However, they have been part of AMD's roadmap for a long while, and there is no indication that things have gone off track. Just the opposite, AMD has made statements suggesting things are progressing pretty much as planned.

Zen 3 will see AMD make use of a refined 7nm+ manufacturing process. Generally speaking, we can expect faster clockspeeds and better power efficiency, and perhaps even more cores. That latter part is interesting, though, because the current-generation Ryzen 9 3950X is technically a 'mainstream' desktop CPU, with 16 cores and 32 threads.
All that said, don't expect AMD to actually launch Zen 3 at CES. Instead, there is a good chance it at least mentions the upcoming architecture, if for no other reason than to say nothing has changed with regards to its 2020 time frame.

AMD mentions high-performance computing in its CES announcement. To us, that is a not-so-subtle hint that it will finally launch the Ryzen Threadripper 3990X, a high-end desktop (HEDT) processor with a staggering 64 cores, 128 threads, and 288MB of cache (and 280W TDP). AMD might also launch its Threadripper 3980X part with 48 cores and 96 threads.
We are also expecting AMD to introduce new mobile and desktop APUs, and specifically, its Ryzen 4000 "Renoir" lineup. For whatever reason, AMD has kept its APUs slightly behind the curve, as they compare to its regular desktop processors. That's to say, at the present moment AMD's latest-generation APUs are still based on Zen+, not Zen 2.
Beyond all that, AMD might talk about the next version of Navi. We already know that a custom Navi part will power both Sony's PlayStation 5 and Microsoft's Xbox Series X at the end of the year, both with hardware-level support for real-time ray tracing. On the PC side, however, Navi 20 could bring parity with NVIDIA's fastest graphics cards, though we will have to wait and see.
Before that comes to pass, however, AMD will almost certainly announce another lower end Navi part, and specifically the Radeon RX 5600 XT. We have see a bunch of leaks pointing to this unannounced part, including a few 3DMark entries that indicated it will perform roughly on par with a Radeon RX Vega 56. The most telling leak came from ASRock, which briefly posted a product page seemingly confirming the Radeon RX 5600 XT will sport 2,304 stream processors and 6GB of GDDR6 memory on a 192-bit bus.

Whatever ends up getting announced at CES, 2020 figures to be a busy year in tech.