AMD has been riding high on its Zen 2 workhorses as of late, but the resurgent CPU manufacturer is hardly resting on its laurels. Processor designs tend to have long lead times, so it should be no surprise to anyone that the company has been working on its next-generation architecture for quite a while. It's not every day that a company leaks detailed, juicy tidbits about upcoming processors, though.

Thanks to a couple of recent leaks in both AIDA 64 update notes and from AMD itself, however, we know Zen 3 is coming along nicely and that it'll sport a brand-new architecture. Thanks to yet more purported leaks inside AMD, we may also know more about how Zen 3 CPUs will be configured.

The big new this time is that there won't be much of a change. Zen 3 Ryzen 4000-series mainstream CPUs should still have upwards of 16 cores, so performance improvements will have to come in the form of either higher operating frequencies or better instructions-per-clock (IPC) performance. Red Gaming Tech says several sources have claimed AMD doesn't feel any pressure to bump up the number of cores to counter what Intel will be producing in the near term.


We can also strike enhanced CPU clock speeds from the list of possible improvements. AMD will use TSMC's 7nm+ process enhanced with extreme ultraviolet lithography (EUV). While TSMC's process theoretically allows for upwards of 20% higher clocks, Red Gaming Tech's sources say to not expect that. Foundries have been famously chasing EUV tech for years, and TSMC appears to be taking a conservative approach to this nascent method. Samsung has had EUV processors for a year now, but yields have been reportedly low, so it still seems premature to bet the farm on ever increasing clock speeds.

Instead, AMD seems to be targeting IPC gains for better performance. With Zen 2, much of those gains were realized through cache re-configurations—the Ryzen 7 3700X and 3800X have 32 MB of L3 cache, twice as much as the original Zen architecture, but it's split into a pair of 16 MB partitions for each core complex (CCX). Increased cache sizes may also carry into Zen 3 at lower cache levels, with as much as a 50% increase in L1 cache coupled with a much higher bandwidth compared to Zen 2. Keeping execution units flush with data is a key component to high performance, and having more cache running at faster speeds should help. One surprising detail is that AVX-512 support still won't make its way into Zen 3, even though Intel included it as part of Ice Lake.

One of the performance bottlenecks within previous Zen-based CPUs has been partitioning cores into four-core CCXes. As we mentioned before, each CCX has its own dedicated L3 cache, so data has to be duplicated in order for a process to include cores from multiple CCXes. According to the newly leaked roadmap, Zen 3 will put eight cores into each CCX, which has the effect of increasing available resources without having to go out to higher level caches to share data. 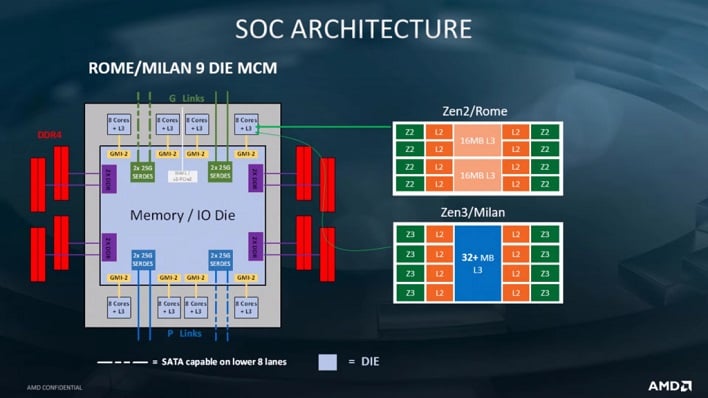 If some mainstream Zen CPUs continue to come with eight cores, those cores will be part of a single cohesive unit in these expanded single CCXes, eliminating a performance limitation. The above leaked slide applies to Zen 3 and Milan-based EPYC processors, and we'll be very interested to see if it holds true. That 32 MB of L3 cache would then be truly unified, and de-duplication of data theoretically can effectively make more cache available for every core in the CPU.

If the number of cores at a given price level turns out to be true, that stands in stark contrast to AMD CTO Mark Papermaster's comments earlier this month, in which he said he doesn't see a "saturation point" for the number of cores in a processor. For specific workloads, including high-performance compute (HPC) loads and server loads that can be easily made parallel, it's true that in general, the more cores the merrier. We're talking about mainstream CPUs here, however, and our own tests over the last few months indicate that's not the case just yet.

The good news for Ryzen 3000 buyers is that it appears Zen 3 should be a drop-in replacement for a Zen 2 CPU, as the new architecture will still rely on DDR4 memory and PCI Express 4.0. As we learned with Ryzen 3000, though, not all motherboards were compatible, but we're hoping a big majority of new PCs can take these processors as upgrades with minimal fuss.

While leaks and speculation are an awful lot of fun, leaked AMD roadmaps indicate we've still got close to a year before we can find out if any of this is true. We'll be keeping our eyes peeled, because 2020 is already shaping up to be a fun year in the CPU world.