AMD is not saying much about its next-generation APUs (accelerated processing units), or Ryzen processors with Vega graphics, as the company prefers to call them. However, the latest AMD Bootcamp drivers for December 2019 seemingly contain some clues as what will comprise the upcoming chips, when they finally arrive.
Otherwise known as Renoir, AMD's next-generation APUs will feature CPU cores based on its Zen 2 architecture, the same as found in its newest desktop Ryzen and enthusiast Threadripper parts. What has not been set in stone, however, is the graphics architecture. It has been widely assumed AMD will stick with Vega for another round, and the data mine into the Bootcamp drivers reinforce this notion. 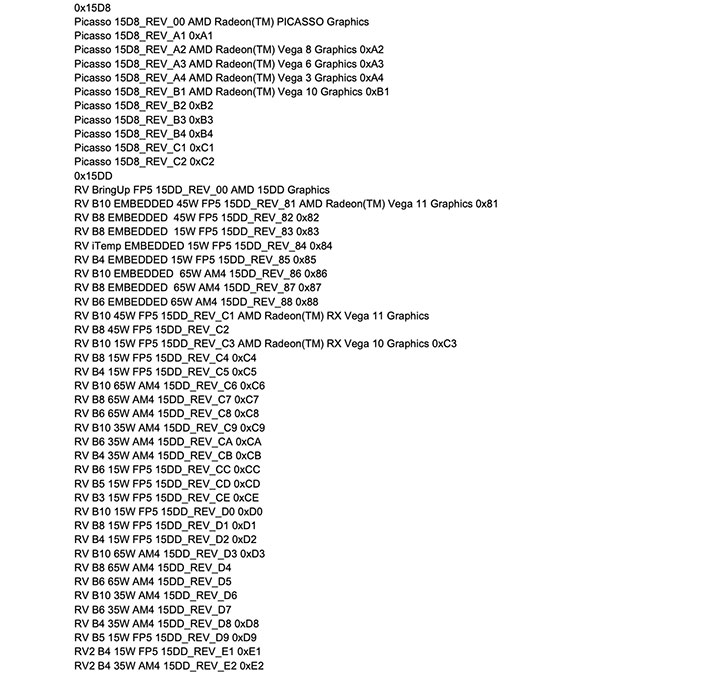 From the screenshot above, it appears AMD is readying a whole bunch of Renoir APUs, both in mobile and desktop form. There are over two dozen Renoir entries, including 14 mobile variants and 14 desktop parts (including Pro versions).

On the mobile side, it looks as though AMD is prepping eight 15W TDP (thermal design power) models, split evenly between consumer and Pro variants, and six 45W models, also split evenly between consumer and Pro models. These will feature up to 13 Vega compute units.
As for the desktop roundup, the Renoir APUs will comprise six 65W models and six 35W models, according to the Bootcamp driver entries. These will feature up to 11 compute units.
Configurations will vary, and of course none of this is official. However, here's how to decode the entries, assuming AMD sticks with the same pattern for Renoir:

And here's what translates into for the mobile and desktop variants...

We'd like to see these chips arrive with Navi underneath the hood, but it's looking increasingly likely that Vega will be used for another round. Even so, this could end up being potent parts, relatively speaking.
There's still no word on when AMD will formally introduce Renoir. However, AMD launched its Ryzen 3000 series Picasso APUs at the Consumer Electronics Show earlier this year, so we could be looking at a Renoir unveil at CES 2020.