Here's How To Upgrade Your PlayStation 5 With A Fast SSD 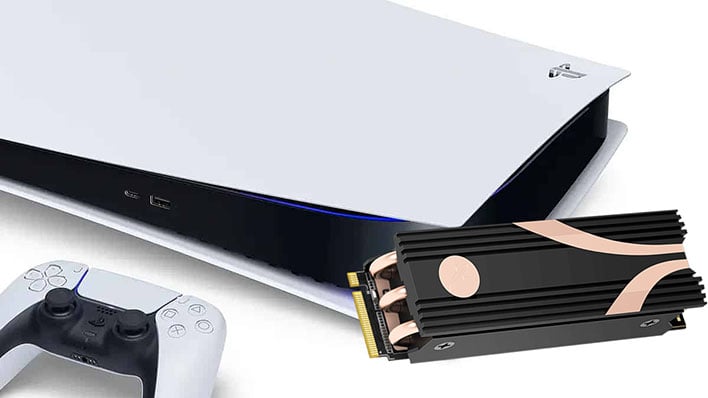 Sony's PlayStation 5 launched in November of 2020 somewhat incomplete. While the hardware had an M.2 slot to expand the internal storage needed by PS5 games, the software didn't know what to do with it out of the box. Earlier this year though, Sony opened up a beta program with early access to firmware that can use that slot, and we managed to get in.

To make the most of that, we teamed up with the folks at Sabrent, who sent along a 2 TB Rocket 4 Plus NVMe SSD and a heat sink solution to keep the drive cool. Unfortunately, the PS5's limited internal space prevented us from using the heatsink, but we could pick up a smaller, compatible solution on Amazon for around $10. 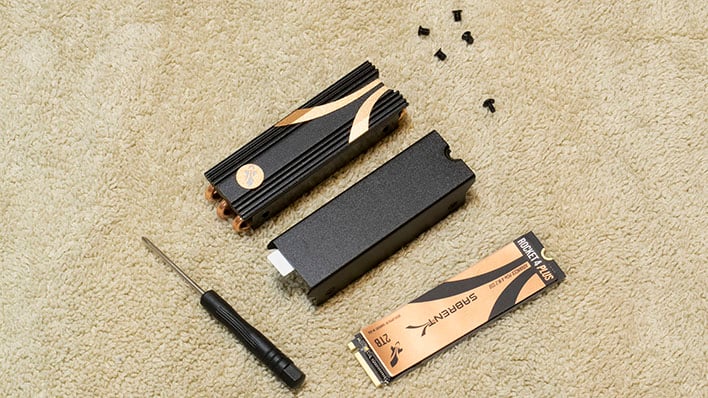 The Rocket 4 Plus is based on Phison's latest E18 controller, and as a result it should be incredibly fast. Next let's take a quick look at the upgrade process, which is fairly straight-forward.

Here's the fun part. Rather than try to explain in prose and photos, we decided to capture the experience in a video. Watch along with us as we upgrade the PS5's internal storage and check out loading speeds with the built-in flash and the Sabrent Rocket 4 Plus. We'll also take a look at the PS4 versions of a few games to show the impact of the new console generation and its more advanced storage subsystem. The PS5 streams data off of its internal storage in such a way to virtually eliminate loading screens, which significantly upgrades the experience in our opinion. Thankfully, something similar is coming to the PC soon as well. Speedy load times are potentially the most exciting part of DirectX 12 Ultimate, thanks to the new DirectStorage API, so this can give a taste of what PC gamers will hopefully soon come to enjoy.

Update Aug 26, 2020 2:15 PM EDT: After this article and video went live, Sabrent reached out to us to let us know that temperatures overall seem to be lower if we'd left the EMI shield off, and the deluxe heatsink would fit in that case. While that does appear to work, we have our own concerns about the possibility of static buildup, since these sit in living rooms, often times near carpet. The decision to leave the shield off is ultimately up to the owner, but we're going to defer to Sony on this one, and the shield will stay on our unit.

Here's a quick rundown of our parts list for this project:
You can of course find versions of the Sabrent Rocket without its custom heatsink, which will save you a few dollars as well. Regardless, this is what you need to get the job done, but before we get into the benchmarks, let's take a look at the Sabrent Rocket 4 Plus's individual specs.

Sabrent Rocket 4.0 Plus: Features And Specifications 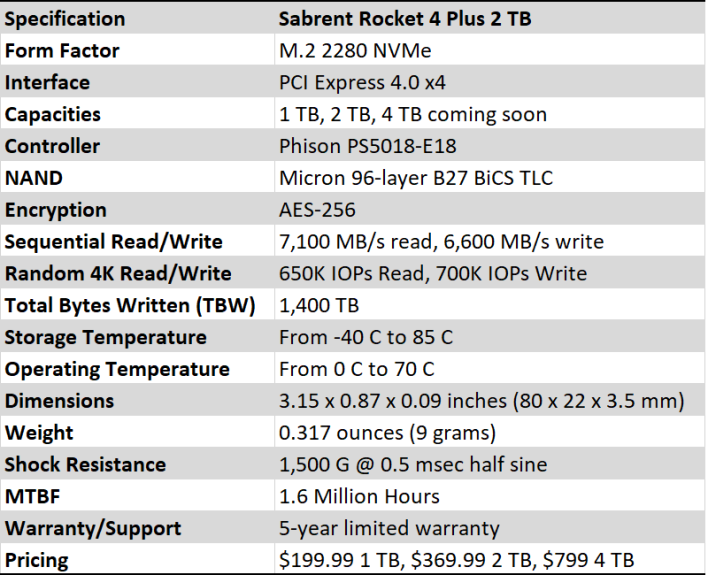 
The Rocket 4 Plus' specifications are among the best currently available, and Sabrent says that the drive will surpass Sony's recommendation of 5.5GB per second of bandwidth for M.2 drives in the PS5. To test that out, we ran a couple of quick sanity check benchmarks before we upgraded the console.


Benchmarking the Sabrent Rocket 4 Plus

While the focus of this is on the PlayStation 5 experience, we needed to put the drive through at least some quick benchmarks to get an idea of how fast it could run. To do that, we used our usual test rig with AMD's latest CPU and plenty of RAM available.


As always, we ran each test a minimum of three times and reported the median result, with a power cycle in between runs to make sure nothing weighed the system down. Windows 10 was updated to the latest 21H1 update for these tests, and all drivers were updated to the latest, where applicable.

ATTO is a "quick and dirty" type of disk benchmark that measures transfer speeds across a specific volume length which uses a formatted partition, so we formatted the drive with NTFS. It measures raw transfer rates for both reads and writes and graphs them out in an easily interpreted chart. We chose .5KB through 64MB transfer sizes and a queue depth of 6 over a total max volume length of 256MB. ATTO's workloads are sequential in nature and measure raw bandwidth, rather than I/O response time, access latency, etc. 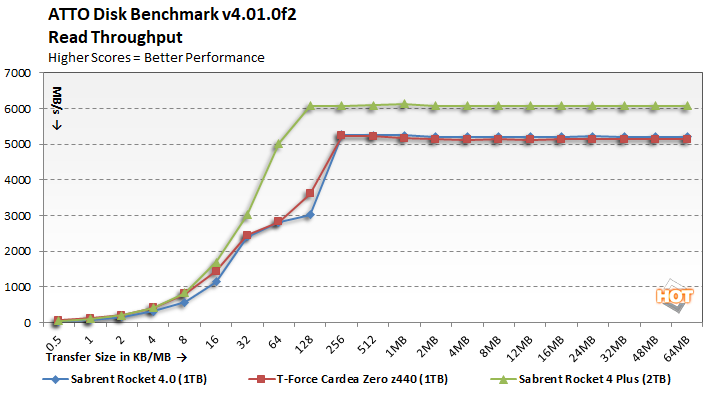 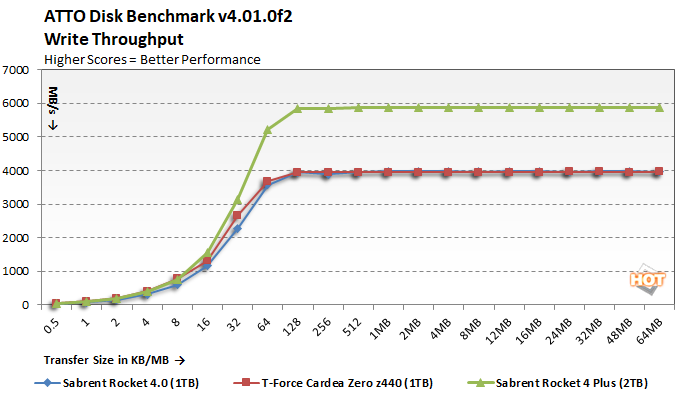 In terms of raw bandwidth, the Rocket 4 Plus is the fastest of the drives we had on hand for comparison. All three drives here are PCIe 4.0 SSDs, but the other original Sabrent Rocket 4 along with the T-Force Cardea Zero z440 top out at around 4 GB per second, whereas the newer Rocket 4 Plus and its Phison E18 controller came awfully close to 6GB per second. We already knew that the E18 was a big step up, but here we get to look at it in a new retail product on the market, and it delivers. 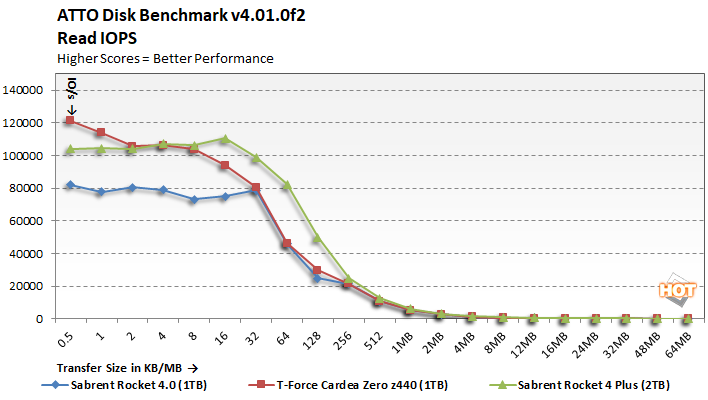 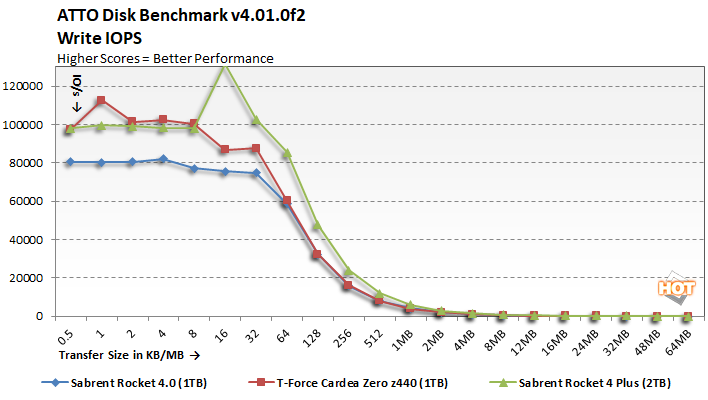 The IO benchmark is a bit different. At very small transaction sizes, the Cardea Zero z440 is a bit faster, and it's the Sabrent Rocket 4.0 that sinks to the bottom by itself. The Rocket 4 Plus is roughly on par with the T-Force drive, but has a big spike at 16 kB transactions, hitting nearly 130k per second, and then retains the lead for the rest of the run. 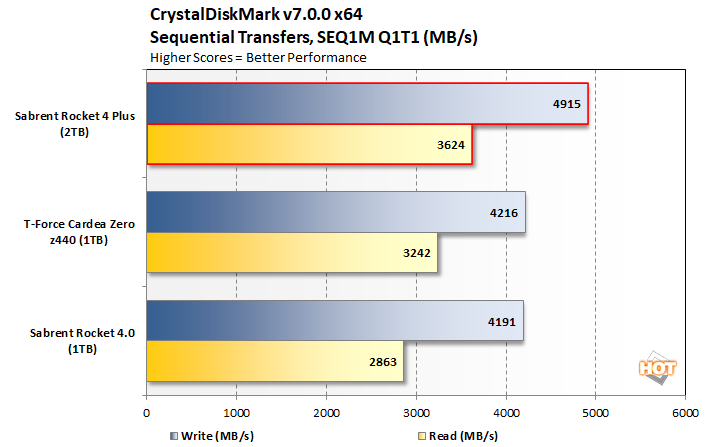 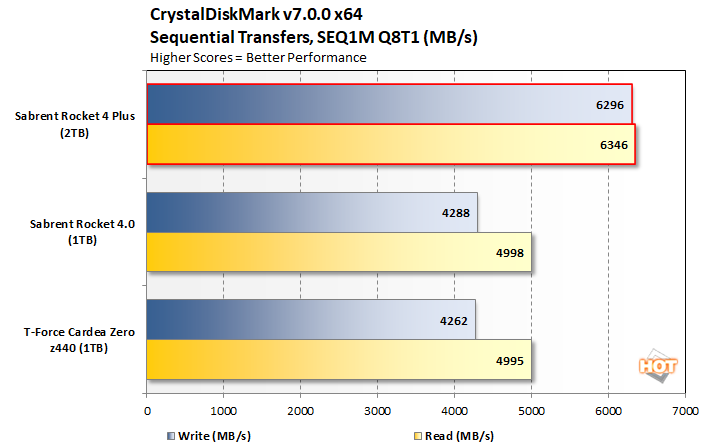 Sequential read and write speeds give the Sabrent Rocket 4 Plus another very nice win over its predecessors, whether it's reading with just a single entry in the queue or with eight of them. Hitting 6.3 GB per seconds in the Q8T1 test doesn't catch its 7,100 MB per second specification, but riding shotgun inside the PS5 we doubt it'll make much difference. 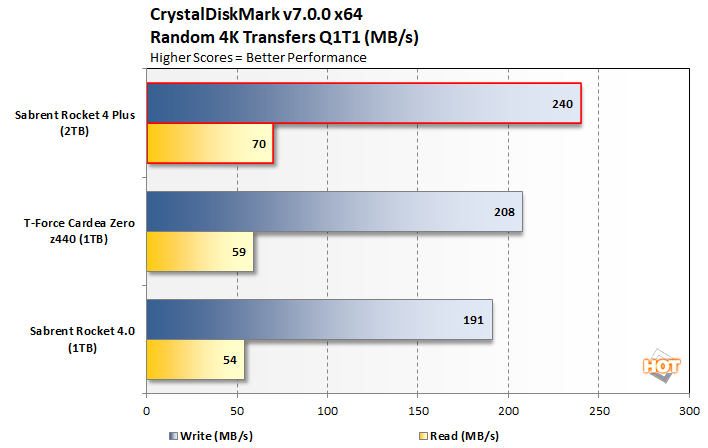 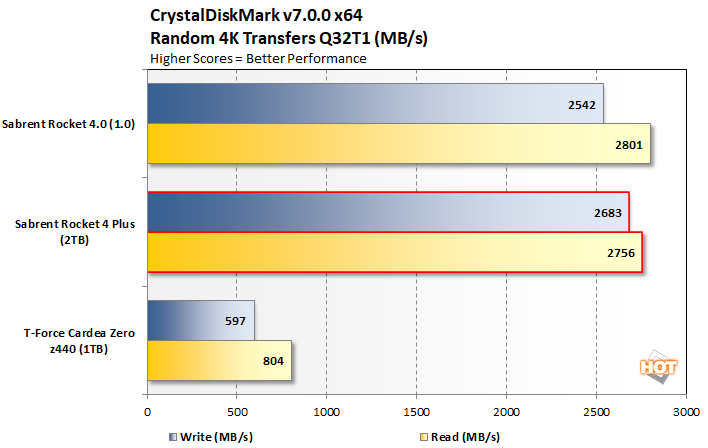 The Sabrent Rocket 4 Plus is a fast drive that will provide some of the best experience possible, not only housed inside the PlayStation 5, but also in a fast desktop PC. Phison's E18 controller is exceptionally fast, and the drive acquitted itself very nicely, not only in benchmarks but real-world game testing inside our PlayStation 5. This is certainly a drive for all occasions, though we'd go with a different heatsink if we're upgrading a console. Sabrent's solution didn't quite fit unless you're comfortable removing the PS5's stock EMI shield, but it'd be a nice addition to a gaming PC. 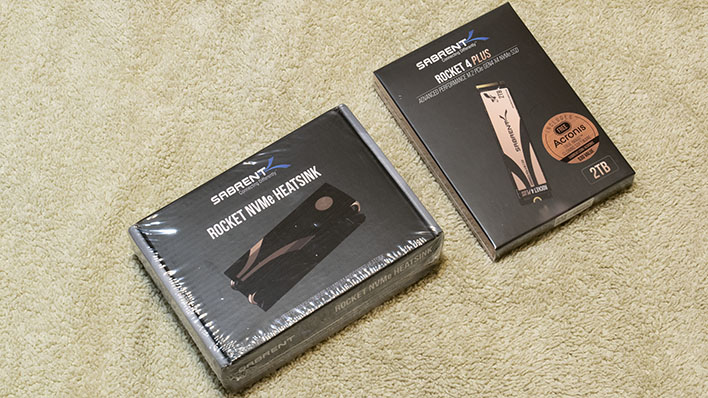 Very fast read and write bandwidth coupled with strong IO throughput make this drive one to watch. At $199 for 1 TB and $359 for 2 TB models, it's command a bit of a premium, but the performance on tap might be worth spending a few extra bucks. It would certainly help once DirectStorage comes into play. The Phison E18 controller has made its way into a handful of drives already at launch, and the Sabrent Rocket 4 Plus is an exceptional example of what it can do.

Beta firmware updates are always a gamble, so cautious PS5 owners might want to wait for the final release, which seems to be coming relatively soon. Adventurous gamers can dive right in by signing up on Sony's website though. Whenever PS5 owners jump in, the Sabrent Rocket 4 Plus is an excellent choice to extend the usable storage space with a very fast SSD solution.