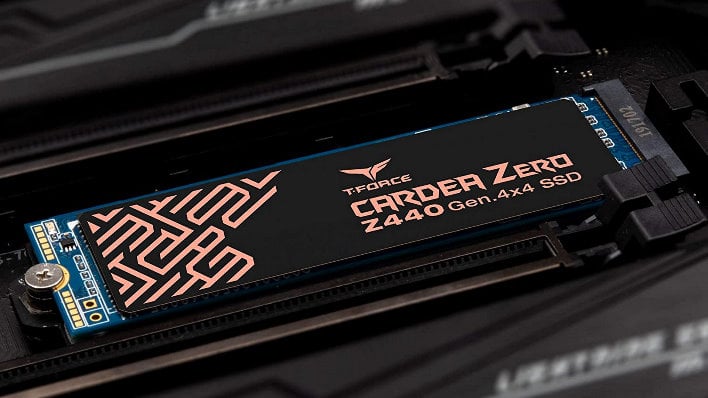 The PCI Express 4.0 interface has been around on AMD's Ryzen platform for a long time now, ever since the launch of Zen 2 and the X570 chipset. The new spec has finally gone mainstream on Intel's platforms, as well, with the release of the Rocket Lake-S 11th Gen Core processor family and the accompanying Z590 PCH. That means that neither camp is restricted to the older 3.0 spec which has half the bandwidth of the newer PCIe interface. It's high time we saw PCIe 4 solid state drives go mainstream, and today we have another offering on tap as a result with TEAMGROUP's T-Force Cardea Zero Z440 M.2 SSD.

As we hinted above, this drive rides the latest PCI Express bus for the most potential bandwidth possible with four lanes of PCIe 4.0 connectivity. While Samsung holds down the high end with its SSD 980 Pro and TEAMGROUP itself has a more expensive A440 model drive, the Cardea Zero Z440 aims for a more affordable price points. Still, this drive doesn't skimp on the specs with upwards of 5 GB per second of reads and 4.5 GB/s in sequential writes. And with that, now is a great time to run down all the Cardea Zero Z440's specs. 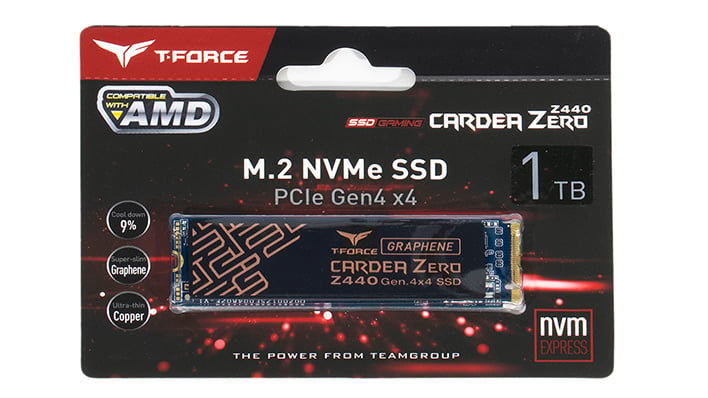 The Phison PS5016-E16 controller at the heart of the Cardea Zero Z440 has been around for a while, making it a mature but still pretty speedy platform upon which to build a budget-friendly PCIe 4.0 drive. In fact, if we look back at both our Ryzen 9 3900X review, which featured a Gigabyte AORUS PCIe 4.0 drive, and Sabrent Rocket 4.0 review, we can see that this drive configuration has been through our doors a time or two. That's not a bad thing, either, because those drives are pretty fast and the Phison E16 controller supports AES-256 encryption. While Phison's PS5018-E18 is right around the corner with 7 GB of throughput, drives based on that controller won't be as affordable as this one. 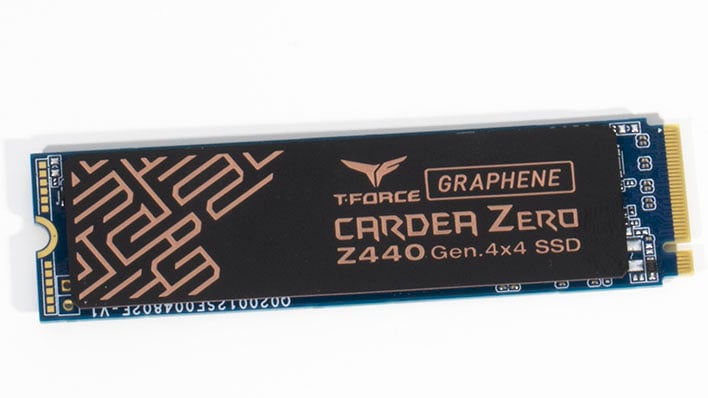 The Cardea Zero Z440 has a copper and graphene label over the controller and 96-layer 3D BiCS NAND, which should help spread heat and keep the drive from throttling under normal conditions. This isn't anything new, exactly; many SSDs, including the Sabrent mentioned above, have a similar setup, and it works well. The drive comes in a standard M.2 2280 form factor, which is compatible with the vast majority of notebooks and desktop motherboards alike, especially those with PCIe 4.0 connectivity like those with Intels' Z590 and AMD's 500 series chipsets.

The specs table carries a couple of very welcome sights. First of all, the total bytes written (TBW) rating comes up to 1,800 TB for the 1 TB drive's TLC NAND. Cheaper drives like the WD Blue SN550 we recently reviewed carry much lower ratings because those drives use QLC memory, which stores four bits per channel. Corners have to be cut somewhere, but this isn't a bottom of the barrel drive, so a longer endurance rating is expected. TEAMGROUP stands by that, too, with a five-year limited warranty.

We're reviewing the 1 TB version of the Cardea Zero Z440, but there's also a 2 TB version available. The TBW endurance rating is 3,600 TB for the 2 TB drive, but that's expected with twice as much capacity on board. According to the larger drive's specifications, the two capacities will perform about the same. Both are rated for 5 GB per second of writes and 4.4 GB per second in sequential reads. The Cardea Zero Z440 should be no slouch in the random read and write department either, as it's rated for 750k IOPS in both directions. 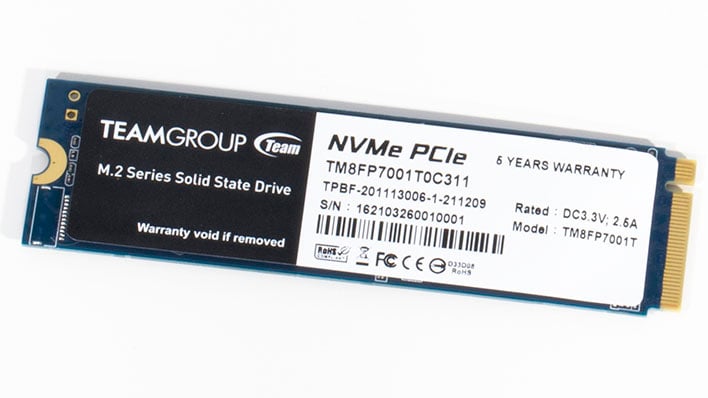 It's time to dive into performance testing on the T-Force Cardea Zero Z440. Under each test condition, the SSDs tested here were installed as secondary volumes in our testbed, with a separate drive used for the OS and benchmark installations. Our testbed's motherboard was updated with the latest BIOS available at the time of publication. We secure erased each SSD prior to testing (when applicable), and left them blank without partitions for some tests. Other benchmarks required the drives to be partitioned and formatted, as is the case with the ATTO, PCMark, and CrystalDiskMark tests. Windows firewall, automatic updates, and screen savers were all disabled before testing and Windows 10 Quiet Hours / Focus Assist was enabled.


First up, we used SiSoft SANDRA, the the System ANalyzer, Diagnostic and Reporting Assistant for some quick tests. The File System Test runs on a specified partition, so we ensured that the entire drive was dedicated to a single volume. Read and write performance metrics, along with the overall drive score, are detailed below. 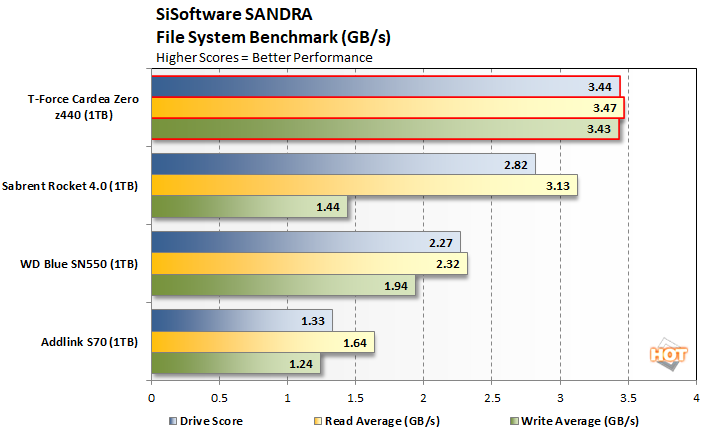 Our first test was quite a surprised. We had expected similar performance to the Sabrent Rocket 4.0 which has the same Phison E16 controller and 1 TB of BiCS TLC NAND. However, it seems that TEAMGROUP was able to extract a little extra performance, at least in this test, especially on the write portion. We're definitely off to a solid start here. 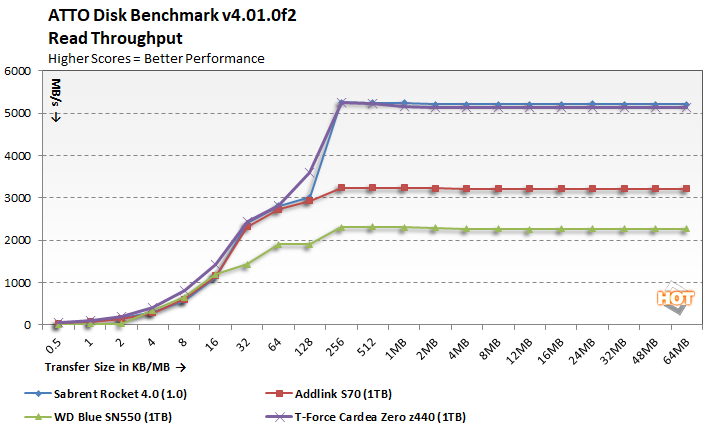 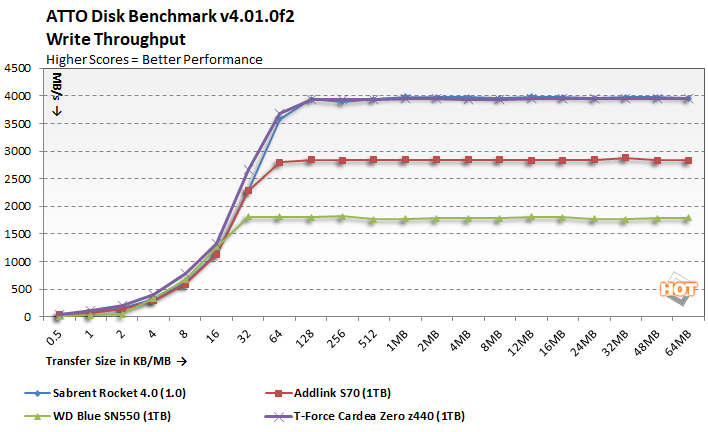 In terms of raw throughput, the T-Force Cardea Zero Z440 is right on par with the Sabrent Rocket 4.0, and the drive more or less hit its performance targets. More than 5 GB per second on reads once we hit the 256 kB block size is blistering quick. Writing at 4 GB per second from 128 kB and beyond is also pretty darn quick. Unfortunately, our testbed used here isn't the same as the one used in the Samsung 980 Pro review, so that drive has been excluded. The Samsung also a more expensive option, even at 1 TB capacities, so it's in a different class altogether. 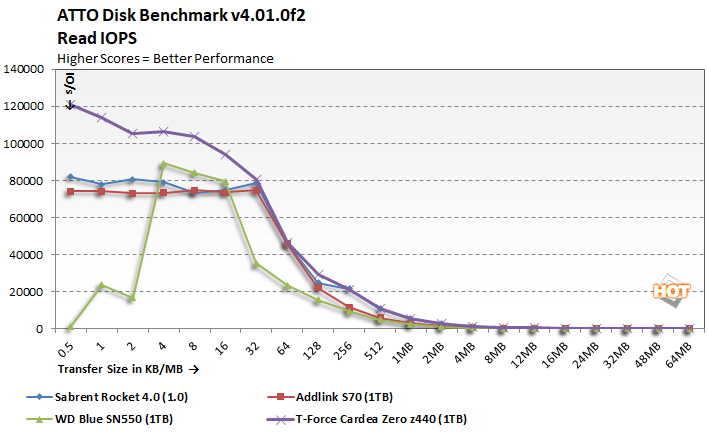 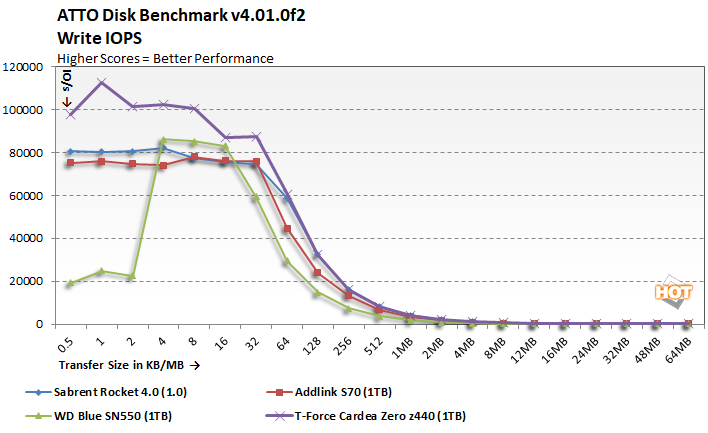 While the Sabrent Rocket 4.0 failed to distinguish itself from our PCI Express 3.0 NVMe drives in the IO tests, the Cardea Zero Z440 placed itself above and beyond, especially at low block sizes where each transaction counts. As the block size increases, each IO operation grows in size, so all of our drives start to become limited by more sequential performance and less random throughput. Tailing off at the end is expected, regardless of the price or performance class. 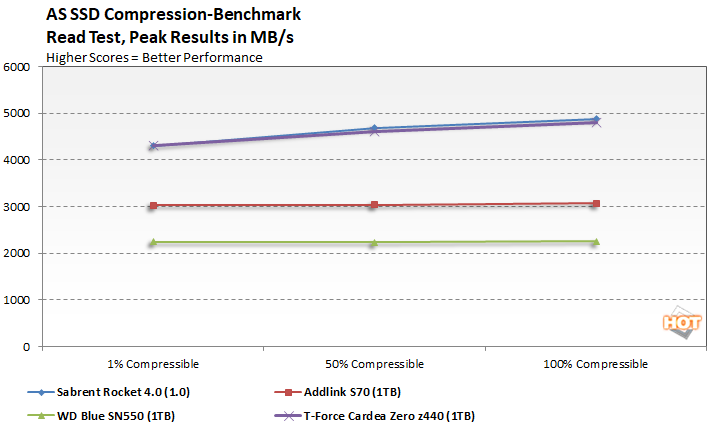 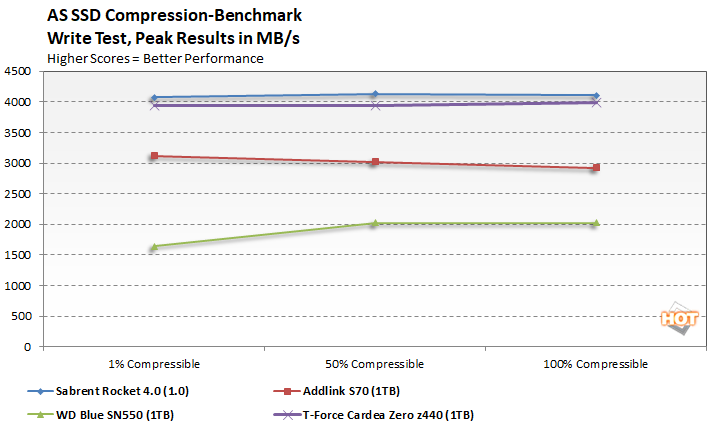 As a throughput test, the Cardea Zero Z440 once again matches the Sabrent Rocket 4.0, so we're starting to get a feel for how this drive performs: very fast. Both drives see moderate gains on the read test as the compressibility of the data is increased. On the other hand, performance in the write test remains flat.

Next up, we'll see a few more tests, and then render our verdict in the conclusion of this review.